Accessibility links
Movie Review - '56 Up' - Checking In Again With The '7 Up' Kids Michael Apted's longitudinal-documentary series gets its eighth installment in 56 Up, which once again profiles a range of Britons from various socioeconomic backgrounds. Critic Mark Jenkins says there are some fascinating updates, if fewer surprises. 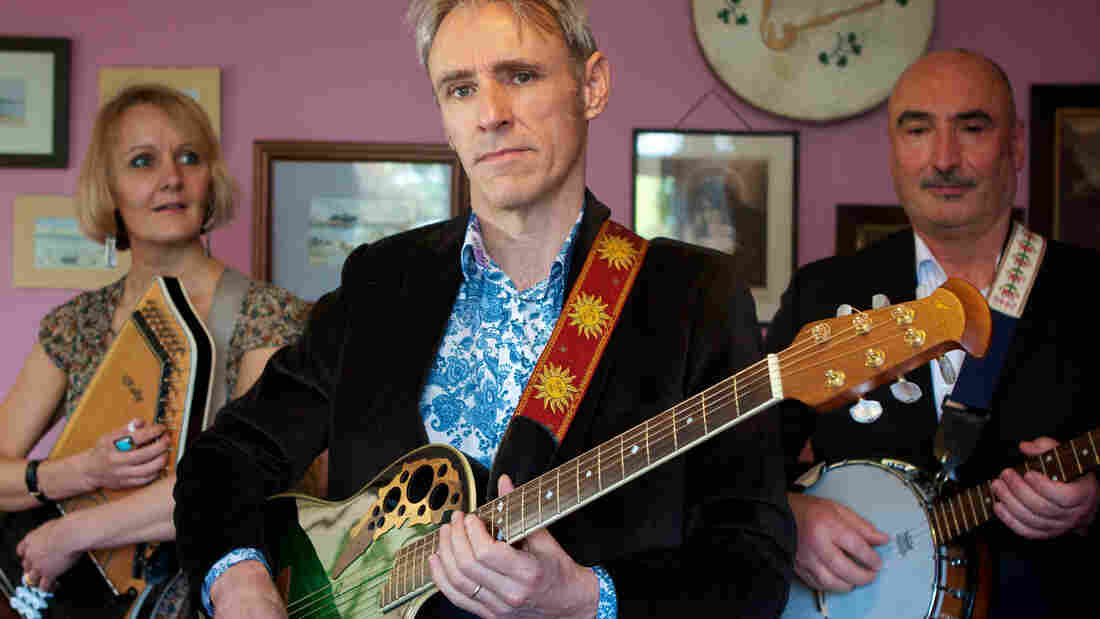 Peter Davies, age 56, and his Good Intentions bandmates Gabi (left) and Francesco Roskel appear in the latest installment of the Up documentary series, inspired by the Jesuit saying, "Give me the child until he is 7 and I will show you the man." Harriet Gill/First Run Features hide caption

Not rated; suitable for general audiences

The participants in 56 Up, the eighth installment in a series that began in 1964, want to talk mostly about two things: family and the documentary itself.

The project, which checks in periodically with 14 kids who were once deemed representative British 7-year-olds, is "a complete fraud," says John, and based on assumptions that "were outmoded even in 1964."

And yet here they are again: the working class and the posh, the aimless and the motivated, the emigrants and the stay-at-homes, most of them now grandparents.

"It's like reading a bad book," says Suzy. "I'll still see it through."

If 56 Up isn't the series' most interesting chapter, it's far more compelling than a bad book. It offers a few insights, and fascinating updates on the most compelling characters. Most lives are fairly settled by age 56, though, so there are fewer surprises and breakthroughs.

Conceived for British television, the Up series has been directed ever since the second episode by Michael Apted, who was a researcher on the original 7 Up. He's a relatively unobtrusive interviewer, although of course he must prune the material until the participants wonder, as Nick puts it, "That's all there is to me?"

When the series began, the subject was open-ended, but one theme was fixed: class. That's why John calls the undertaking a fraud. It assumed that the children's future paths were set by their social and economic status.

But that judgment seems to have proved largely correct. John was one of two overdressed boys who predicted at 7 that they would be lawyers; both are lawyers today. Meanwhile, the lower-class kids (two of them from an orphanage) hold such jobs as cabbie, forklift operator and maintenance man. The last one, at least, lives in sunny Australia rather than the gloomy Britain of his youth.

Suzy, surly at ages 14 and 21, became an upscale housewife, and seems happy with that. She shares an interview with Nick, who moved from a Yorkshire farm to the University of Wisconsin, where he teaches electrical engineering. The two were not friends as kids but formed a bond later.

It was Suzy's idea to do a joint interview, and it's a good one. More such juxtapositions would help the film, which reintroduces too many people who have merely gotten older and acquired grandkids since the last time.

The only one of the 14 who's missing this time is Charles, who hasn't participated since he was 21. Returning after a three-episode absence is Peter, who decided to participate so he could publicize his country-rock band, the Good Intentions. A teacher turned civil servant, he dropped out of the series after his 1980s anti-Thatcher remarks caused a furor in Britain's right-wing tabloids.

With the U.K. in a long-term recession, several of the other interviewees have things to say about politics this time. Tony Blair and David Cameron join Thatcher on the list of people who have, supposedly, undermined the nation's education and social-welfare systems. Only the kids who grew up to have country homes seem to have ecological concerns.

Veteran series-viewers will want to know about Neil, the most troubled participant — at times homeless and wrestling with mental-health issues. As previous installments showed, he eventually pulled himself together and became an elected official, representing Britain's third-largest party, the Liberal Democrats.

His is not exactly a success story, but neither is it as grim as once seemed likely. Among the many ex-7-year-olds who followed a predictable path, he's proof that not every life can be so easily charted.