Accessibility links
After Sandy, Can The Jersey Shore Come Home Again? The Jersey shore is a part of the region's culture that inspires nostalgia. But post-Superstorm Sandy, there are questions about how to rebuild the places special to many and who should pay. "Is it going to look like what people remember from their childhoods? The answer is no," one mayor says. 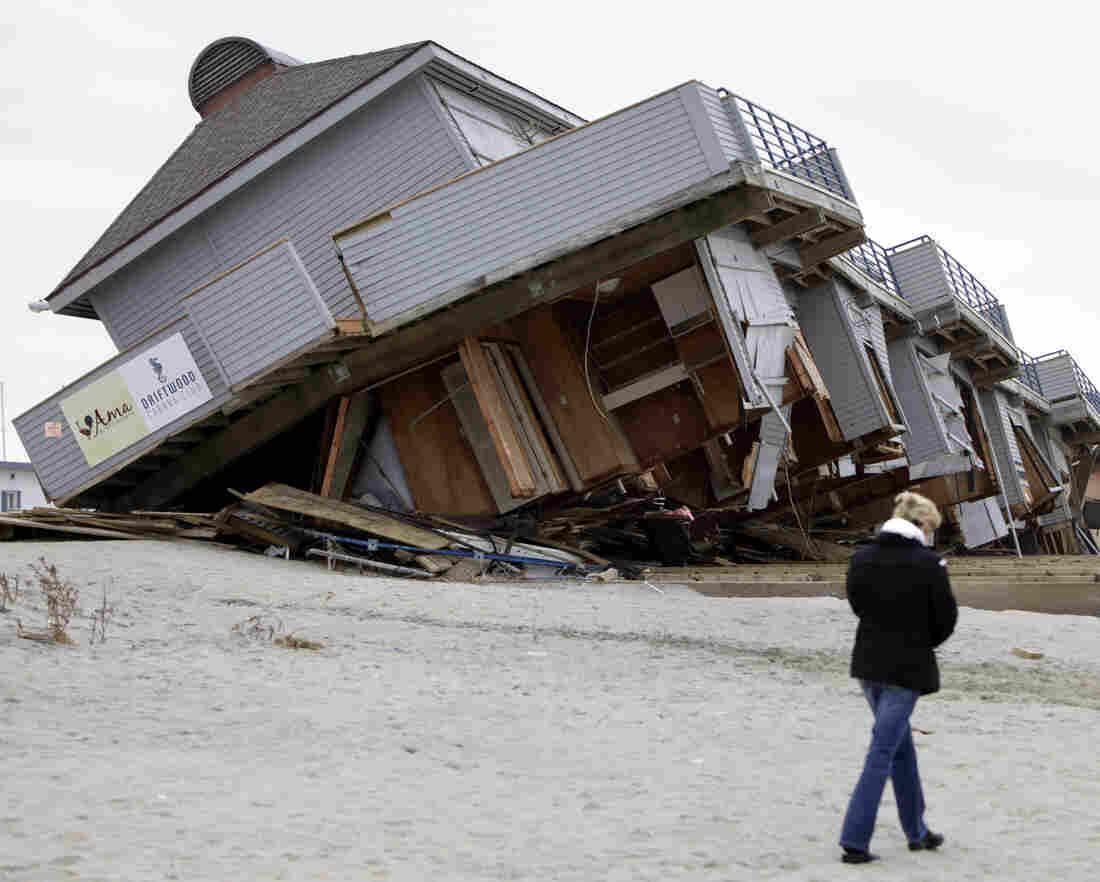 A woman walks past a cabana complex pulled off its foundations by Superstorm Sandy in Sea Bright, N.J., in November. Seth Wenig/AP hide caption 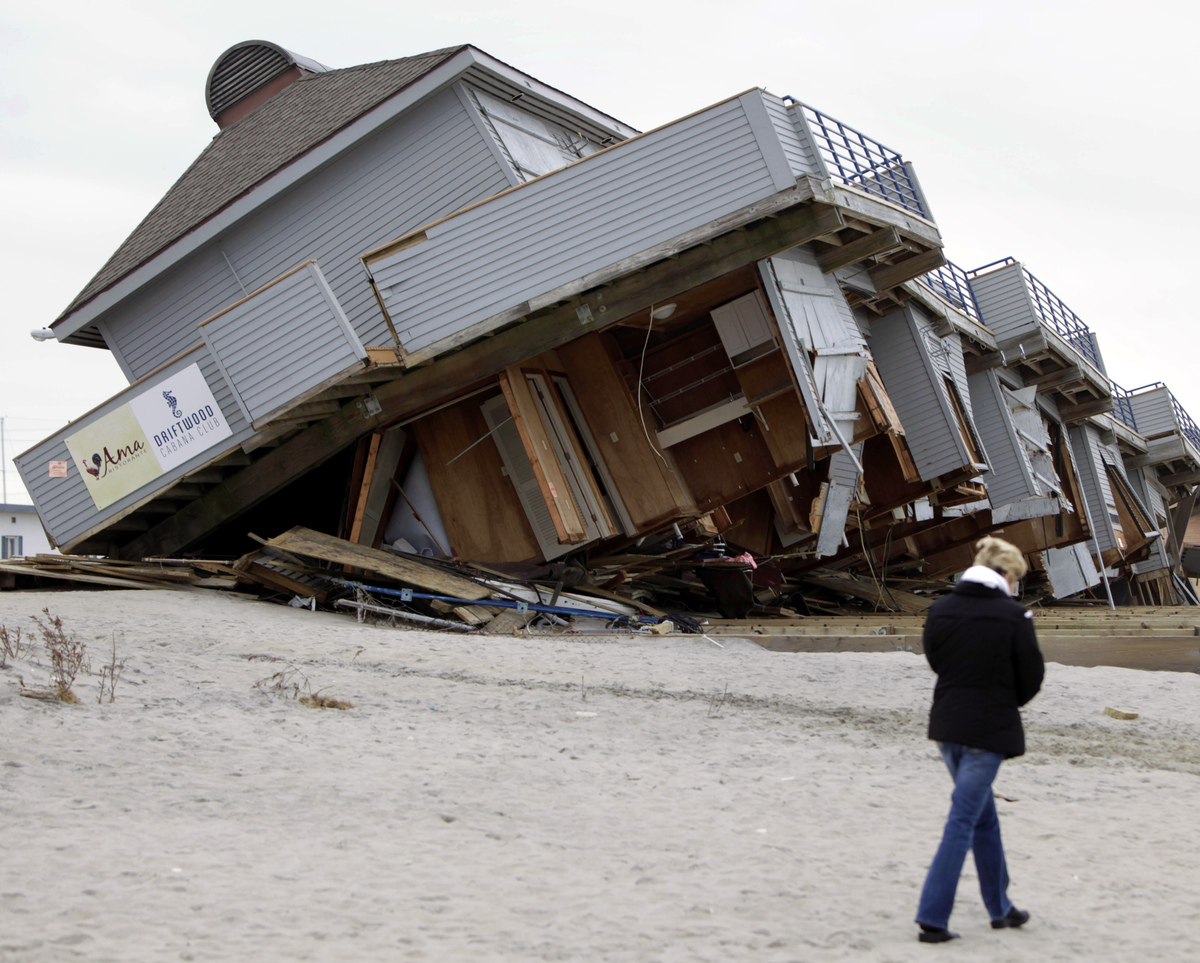 A woman walks past a cabana complex pulled off its foundations by Superstorm Sandy in Sea Bright, N.J., in November.

Think about it and you'll start to realize how important the Jersey shore is to American culture. Sure there's the television show Jersey Shore, but there are more enduring signs. Consider the board game Monopoly; properties are named after Atlantic City locations. And during a television fundraiser for Superstorm Sandy victims in November, comedian Jimmy Fallon talked specifically about the Jersey Shore.

"As all you know, New Jersey was hit really hard. Some beaches were destroyed. Boardwalks were torn apart. But they will be rebuilt. It will come back," Fallon said as he and other musicians launched into the song "Under the Boardwalk."

The Jersey shore accounts for most of the estimated $39 billion tourists spent in the state in 2011. The shore is a part of the region's culture that inspires nostalgia. But there are questions about how to rebuild the places that are special to many and who should pay for it.

For millions of people, the Jersey shore also is part of their personal story.

"My parents tell me that I was conceived at the shore in Lavallette," says Lisa Petrino, a nurse from Yardley, Pa. "For a long time they called me 'Little Lava,' so I feel like it's in my blood."

Petrino says the shore has been a place where families like hers — that didn't have a lot of money — could vacation. For most, the shore is not a high-brow getaway. We're talking hot dogs, fudge shops, carnivals and roller coasters — not the kinds of things many people would fight to preserve, let alone rebuild. But Petrino hopes the shore she remembers will return.

As the Jersey shore rebuilds, it's becoming clear there are competing priorities that will have to be sorted out. In Long Branch, N.J., Maria Montanez has something else at the top of her priority list.

"I'm concerned about making sure you build smartly. Not so much rebuilding everything all over again, but rebuilding the area so, hopefully, it protects people for the future," Montanez says.

In principle, many with fond memories of the Jersey shore will agree with that statement. But this will change what the shore looks like. A roller coaster that prompts fond memories may be built again but perhaps not on a pier out over the water.

In Sea Bright, N.J., dump trucks are still hauling away piles of what used to be homes and businesses. The cleanup here has a long way to go. Even the town hall was damaged, so for weeks after the storm, Mayor Dina Long says, various departments were housed together in a gymnasium.

"One hundred percent of the businesses were lost in Sea Bright during the storm. And 75 percent of our homes at this point are not habitable, including my own," she says.

Long says the city recovery plan — called Sea Bright 20/20 — is based on the principle of "never again," that the city will never be as vulnerable to a strong storm as it was before Sandy. That means a lot of changes.

"What I like to say is, we're putting Sea Bright up on high heels," Long says.

Long says a key element is elevating homes so they're above flood levels.

That sounds simple, but dig a little deeper and you'll find there are some sticky issues that policymakers like Long will have to sort out. Here's just one: parking. As a tourist destination, the Jersey shore needs lots of parking spaces in the summer. But huge parking lots lead to runoff and water pollution.

That is a concern for Cindy Zipf, executive director of Clean Ocean Action. As the shore is rebuilt, she hopes that improving water quality will be a priority.

"Do we really need to put in a parking lot that has hard blacktop that all the water runs off? Or can we put pervious surface areas and make parking lots not as big and put more green spaces in them?" she says.

Business owners like Ernie Giglio have a different vision when it comes to parking. Giglio, who co-owns a tackle shop, says he'd like to see more places for customers to park "as long as they're going to redesign the area."

Sea Bright's mayor says she thinks she can balance these competing priorities. But that's just one issue. There are also questions about how beaches should be engineered. It's clear that building up dunes can protect property, but that also blocks ocean views for expensive beachfront homes.

Then there's the question of who will pay the billions of dollars it will cost to rebuild damaged communities. Mayor Long says her community of 1,500 people had about $400 million in damage.

"Our annual budget is $5 million. We have a $2 million garbage bill so far," she says. "This is bigger than we can handle on our own."

Some shore towns are debating whether to increase their beach access fees to raise more money for recovery but that won't be nearly enough. The federal government will have to help. Democratic Sen. Robert Menendez appealed to lawmakers for their support at a congressional hearing in late November.

"So I'm asking each of our colleagues in the Congress to stand with us and help New Jerseyans recover and rebuild in our time of need, just as I, personally, since I have been here, have stood with the people of the Gulf Coast after Hurricane Katrina or the people of Joplin, Mo.," Menendez said.

The Democratically controlled Senate already has passed a relief package worth more than $60 billion. Under pressure from fellow Republicans — angry that a vote has not yet taken place — Speaker John Boehner says the House will vote on part of the package Friday and the rest of it later this month.