Accessibility links
Obama's On-Again, Off-Again Relationship With Progressives President Obama handily won re-election, but Congress remains fairly unchanged. Will the status quo prevail during his second term? Or will he follow through on promises that got progressives excited about him in 2008? 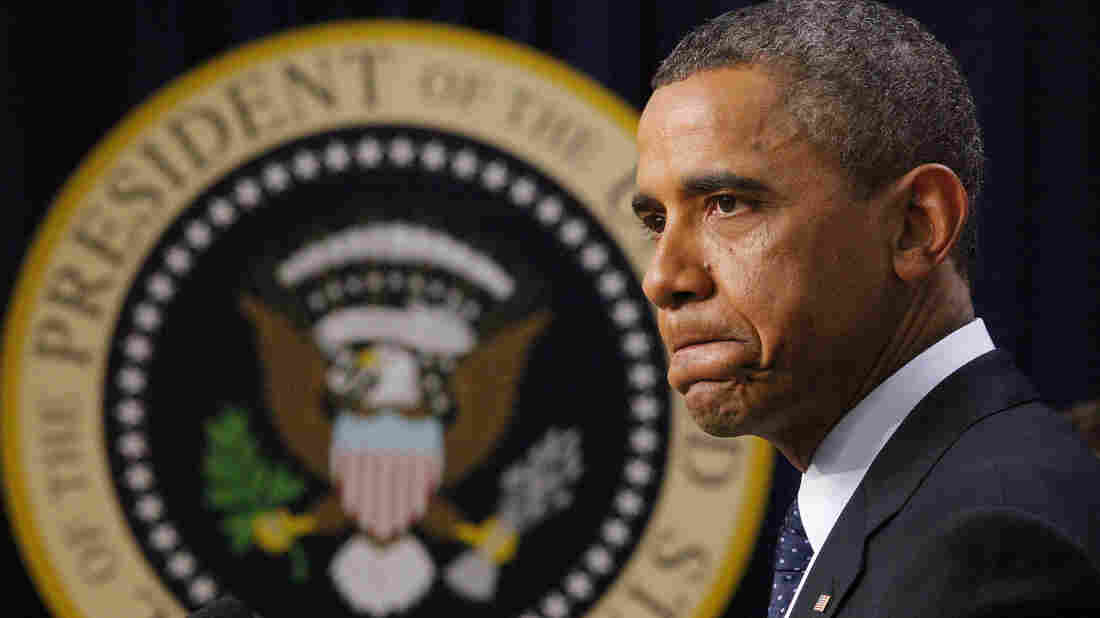 President Obama pauses as he speaks about the fiscal cliff on Monday. Some progressives say the president was not aggressive enough with Republicans during budget talks and are hoping he is stronger in his second term. Charles Dharapak/AP hide caption 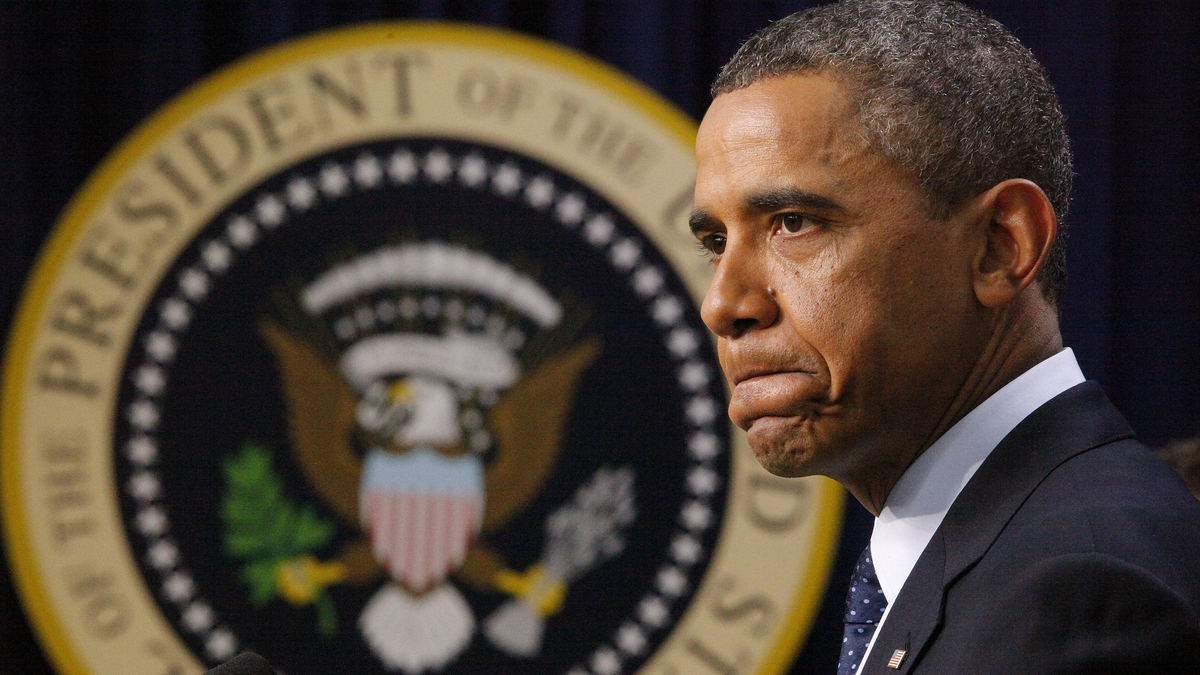 President Obama pauses as he speaks about the fiscal cliff on Monday. Some progressives say the president was not aggressive enough with Republicans during budget talks and are hoping he is stronger in his second term.

When Barack Obama first took office four years ago, many progressives were on cloud nine. Here was a president pledging to tackle some of the issues closest to the progressive base: climate change, gun control and what he called our "broken immigration system."

That was in 2008. Fast forward to now and these are just a few of the unresolved issues leaving progressives unsatisfied.

With Obama's second term around the corner, some progressives are wondering if President Obama will reboot and follow through with his earlier promises.

If the president stands firm ... he will have the overwhelming majority of Americans behind him.

One progressive disappointed in Obama was Shaun Johnson, an assistant professor of elementary education at Towson University in Maryland. Johnson, who also writes for the education blog The Chalk Face, wrote a column in 2011 titled "Obama Lost My Vote."

Johnson tells weekends on All Things Considered host Jacki Lyden that in 2008, he was an ardent Obama supporter who volunteered for the campaign and knocked on doors. But after Obama's first term, the sentiment changed.

"A lot of people, especially in the education community, got all whipped up with anti-Bush and anti-No Child Left Behind sentiment, so they were really looking forward to a shift in education policy," Johnson says. "But there's not a lot of daylight between traditional Democratic and Republican education policies."

Johnson also wrote about his disappointment in things left out of the health care bill that concerned progressives, like single-payer or public-option insurance plans. He also took issue with Obama's foreign policy programs: drone strikes, surveillance and wiretapping.

"He's quite hawkish when it comes to a lot of his foreign policy," he says. "I think he has been painted as this radical leftist by the extreme right, but to me he is more of a center-right president."

Johnson says it's not enough that Obama championed seemingly progressive causes like the repeal of "Don't Ask, Don't Tell" and that he passed the health care law and the Lilly Ledbetter Fair Pay Act.

"He is looking in progressive directions, but to call him a progressive, or a liberal for that matter, is a bridge too far," he says.

Despite his column and his heavy support for the Green Party's education platform, Johnson says he ultimately did end up voting for Obama in the 2012 election.

Some progressives do feel more optimistic about President Obama, however. It seems, after all, like a new day with the election handily won, and Democrats like Elizabeth Warren and Tammy Baldwin moving to the Senate.

Molly Ball, a staff writer who covers national politics for The Atlantic, says progressives are about to have their hopes dashed once again.

Even if Obama is feeling newly liberated by his re-election, Ball says the incremental gains made by Democrats in Congress won't be enough to keep policy fights ahead from running up against the same thing they did over the last four years. Obama would still have to turn a lot of votes in order to pass any progressive legislation, such as climate change.

"People in the environmental community ... don't even hope for climate change legislation out of this Congress," Ball says.

Changes to Social Security, Medicare and Medicaid were spared in the fiscal cliff deal finalized this week, but the fact is they were on the table as part of negotiations until the last day of talks. Ball says this shows the president is open to changes on those entitlement programs, and that has some progressives and liberals nervous.

In 2008 and in his 2004 Democratic National Convention speech, Obama's message was one of bridge-building and being all-inclusive. Ball says it was appealing at the time, but in practice it hasn't been ideal for some liberals.

"There's always been these dueling strains of Obama," she says, "on the one hand as a philosophical liberal and on the other hand someone who seeks compromise — some of his allies would argue to a fault [and] that he tends to give away the store because he's so interested in building bridges to the other side."

Liberals In A Dither Over Whether Obama Blew It, Or Nailed It

Bernie Sanders, for one, knows about compromise. The independent senator from Vermont objected to the fiscal deal but voted for it anyway, saying it was better than the alternative.

The co-founder of the Congressional Progressive Caucus and its only Senate member, Sanders says that by his standards, Obama is not a progressive.

"I think he is kind of a centrist, somewhere in the middle of the Democratic Party," Sanders tells Lyden. "[But] no, he's not a progressive."

Sanders says he was disappointed that the president wasn't more aggressive during the budget negotiations in standing up to what he calls a more "right-wing, extremist Republican Party."

Sanders says the president does deserve more credit, however, for the often-maligned stimulus bill. It was important for Vermont and for America, he says, and its "priorities were exactly right."

His advice to the president for his second term is to stand firm on Social Security, Medicare and Medicaid, as well as to push for corporations to start paying their fair share in taxes.

"If the president stands firm ... he will have the overwhelming majority of Americans behind him," Sanders says. "And sooner or later the Republicans will catch on that they are in danger of becoming a marginal, fringe party unless they get along with the program and do what the American people want."