Accessibility links
After Fighting To Go To School, A Pakistani Woman Builds Her Own Humaira Bachal's father thought it was a waste of time for her to go to middle school. For years, she had to sneak out of the house to attend. When he found out, he was furious. Now, at 25, she runs a school serving more than 1,000 kids in a Karachi slum. 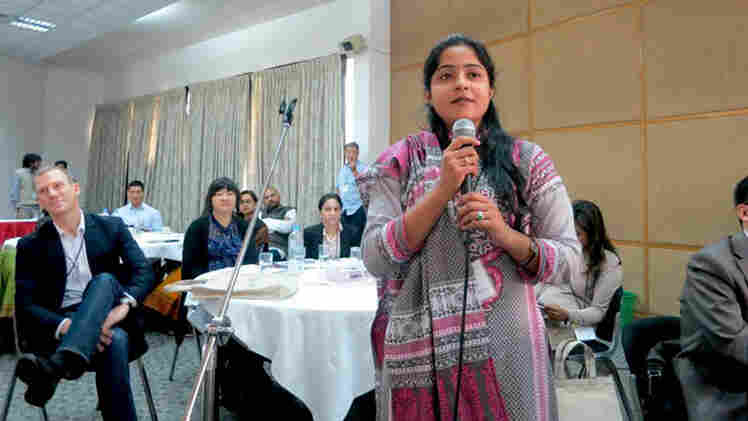 Humaria Bachal initially recruited students in her Karachi neighborhood for a small private school she had opened. She now runs a school with 22 teachers and 1,200 students. Courtesy of Humaria Bachal hide caption 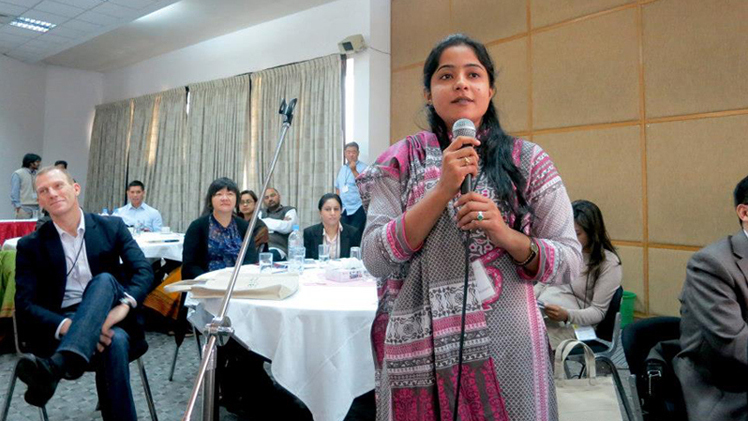 Humaria Bachal initially recruited students in her Karachi neighborhood for a small private school she had opened. She now runs a school with 22 teachers and 1,200 students.

Humaira Bachal, 25, has become a crusader of sorts. She has a passion for education in a country where going door-to-door asking fathers to send their daughters to school can mean risking your life.

"Education is a basic need and a fundamental right for every human being," she says. "I want to change the way my community looks at education, and I will continue to do this until my last breath."

It's hard not to worry about Bachal after the shooting of Malala Yousafzai, the teenager attacked by the Taliban last October in northern Pakistan for speaking out in support of girls' education. Malala was released Friday from a British hospital and is expected to remain in Britain for at least the next few years.

Bachal, meanwhile, recently starred in a documentary series in which her efforts to educate children in her Karachi neighborhood of Moach Goth were the centerpiece. 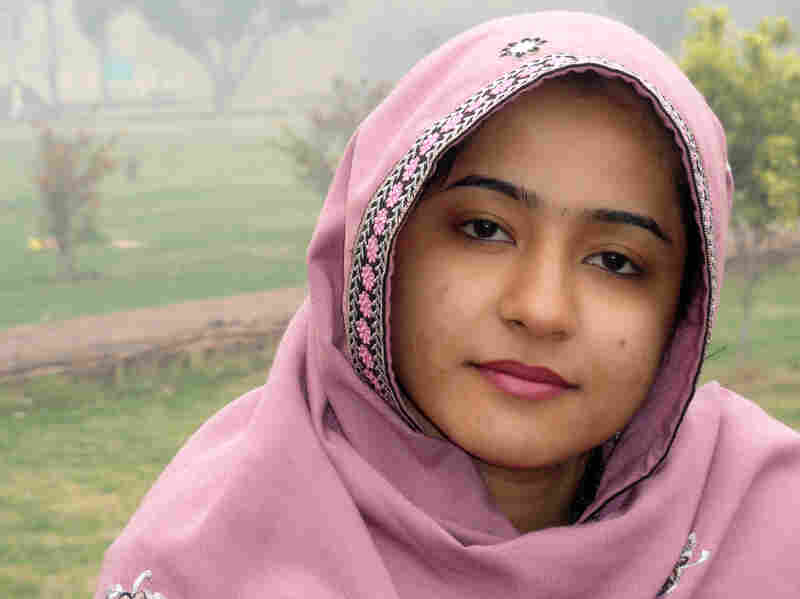 Bachal recently starred in a documentary series which featured her efforts to educate children in her Karachi neighborhood of Moach Goth. Courtesy of Humaira Bachal hide caption 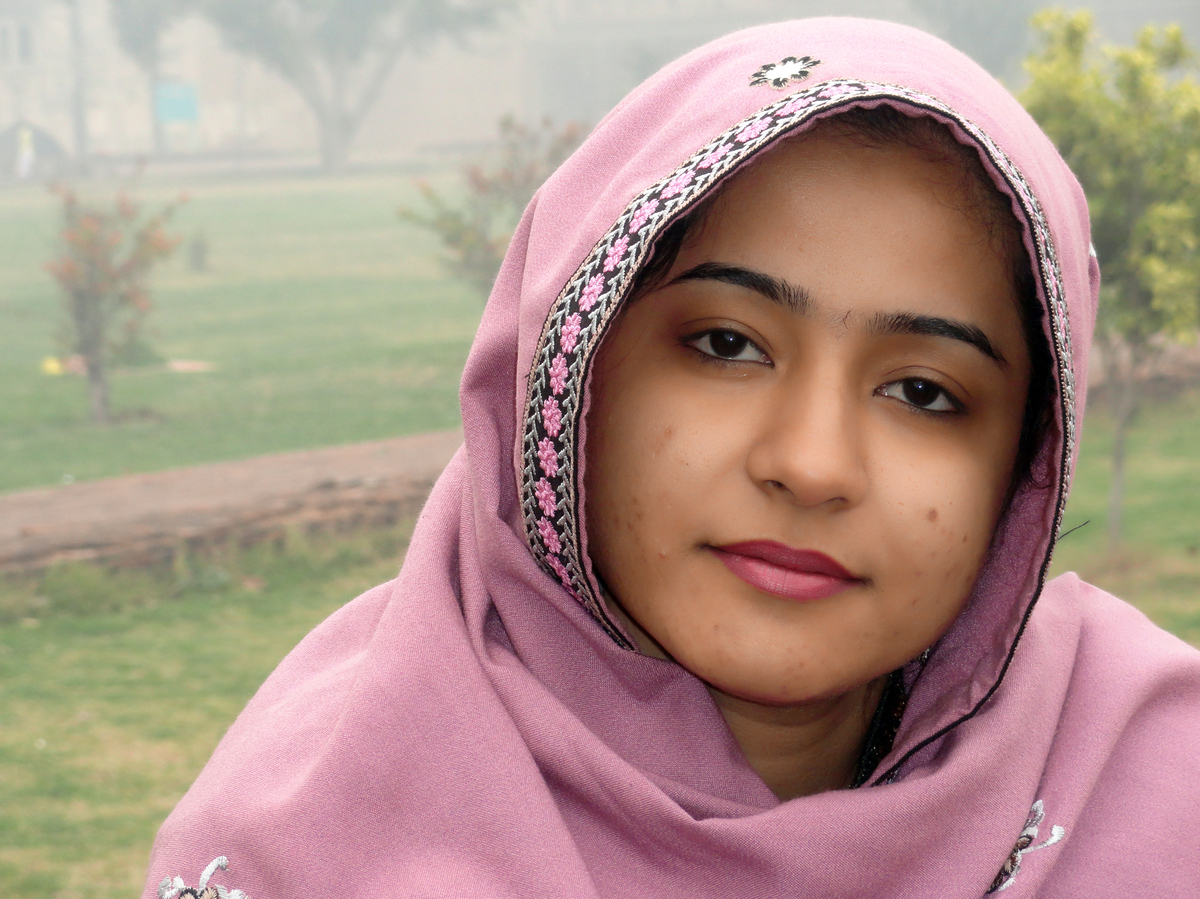 Bachal recently starred in a documentary series which featured her efforts to educate children in her Karachi neighborhood of Moach Goth.

Pakistan's first Oscar-winning filmmaker, Sharmeen Obaid Chinoy, made six short films over the past year, each focusing on an extraordinary Pakistani. Bachal was one of them.

On screen, Bachal looks larger than life and is unnervingly bold. In person, she is barely 5 feet tall. She is self-assured, but also a little shy. She says her advocacy work actually began with herself.

"After I had finished primary school, my father didn't want me to get any education," she says. "He said I was only going to get married and have children."

Sneaking Off To School

But Bachal and her mother had other ideas. While her mother wasn't particularly educated, her family in Iran had been. All of her mother's sisters had gone on to higher education; Bachal's mother thought her daughters should get educations, too.

He discovered the ruse just before Bachal was going to sit for the ninth-grade entrance examination — and Bachal said her father was furious.

"He beat my mother, and he even beat me," she said.

Her father was not a man of education. He drove a truck and is illiterate, and saw no reason why his daughter should waste time on school.

Again, Bachal's mother intervened. She told her daughter to sit for the ninth-grade exam while she tried to calm her husband at home. When Bachal passed the examination, her father eventually relented.

Ninth grade, Bachal says, opened her eyes. She looked around Moach Goth area, and all she saw were children playing in the streets. None of them were in school. None of them were studying. And Bachal, 14 years old at that time, thought that was wrong.

"Education of girls — this is not just today's issue; it is a historical issue," says Roshan Chitrakar, a deputy director and program specialist in education at UNESCO in Islamabad. "One of the things we've been trying to do is bring a perspective to these people that educating a girl is a valuable investment. We have to bring some sort of change to the culture, some sort of change to the thinking of the people."

Pakistani President Asif Ali Zardari vowed during a recent UNESCO event in Paris to raise $10 million to educate all Pakistani girls by 2015, but few think the goal is achievable.

"Pakistan is not doing well" in this regard, Chitrakar says. "We have some improvements, but not in the way or at the pace we'd need to see change to make that goal of 2015."

The numbers are stark. Pakistan spends half as much as neighboring India on education. If you are a young girl in rural Pakistan, you are unlikely ever to see the inside of a classroom.

Across the country, only 57 percent of children even enroll in primary school. Fewer than half of those children complete grade five — and the numbers are even worse in the countryside.

Bachal wanted to change all that — or at least do her part in her village. So she started recruiting students in her neighborhood for a small private school she had opened, and she went door-to-door to convince fathers to send their kids to school.

Establishing A School In A Slum

The campaign was successful. Bachal now runs a school with 22 teachers and 1,200 students. And, thanks to the Chinoy documentary, she is one of the most famous school advocates in the country — which begs the question of whether, in the wake of the Malala shooting, she's worried.

"Just the opposite," she said. "I am not worried about this anymore. Now I'm not afraid. It is not just one Malala or one Bachal who has raised a voice to change this situation. There are a lot of other girls who are trying to change things. Even if they kill 100 Humairas, they won't be able to stop us."

Humaira Bachal, who had to battle her own father to get an education, has now built a school for more than 1,000 students. This news report on her efforts was uploaded to YouTube in 2010.