Accessibility links
New Regulations Could Treat Virginia Abortion Clinics Like Hospitals Virginia Gov. Bob McDonnell has approved regulations requiring clinics where abortions are performed to meet the same building codes as new hospitals. Abortion-rights groups say the regulations are unnecessary, but abortion-rights opponents say they're the only way to ensure that clinics are safe. 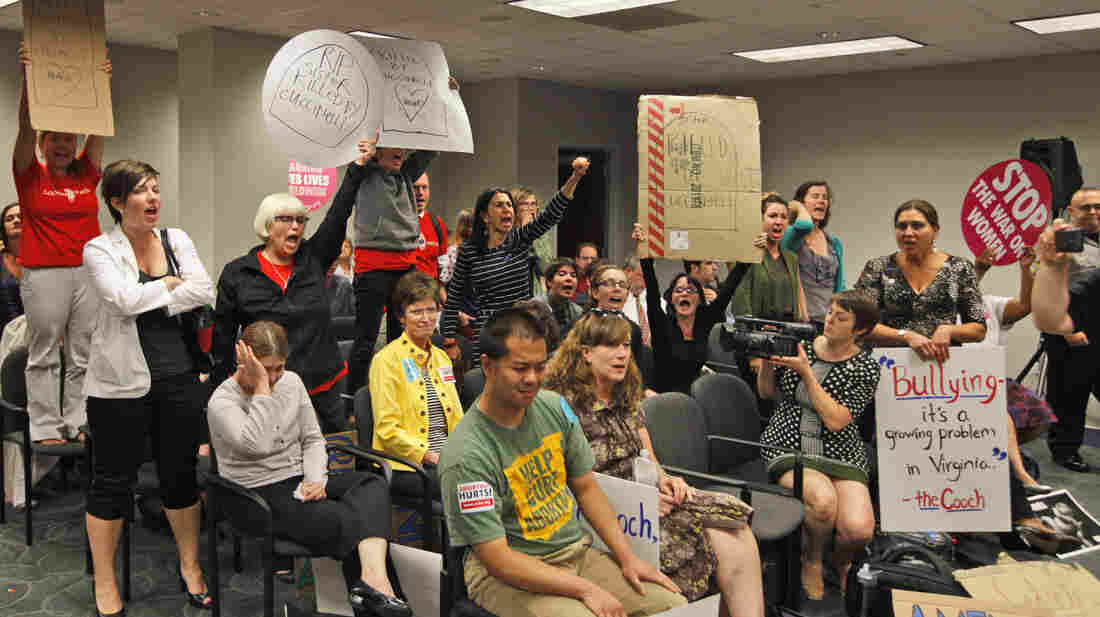 Protesters appeal to members of the Virginia Board of Health after their decision to impose new building regulations on abortion clinics in Richmond, Va., on Sept. 14. Steve Helber/AP hide caption 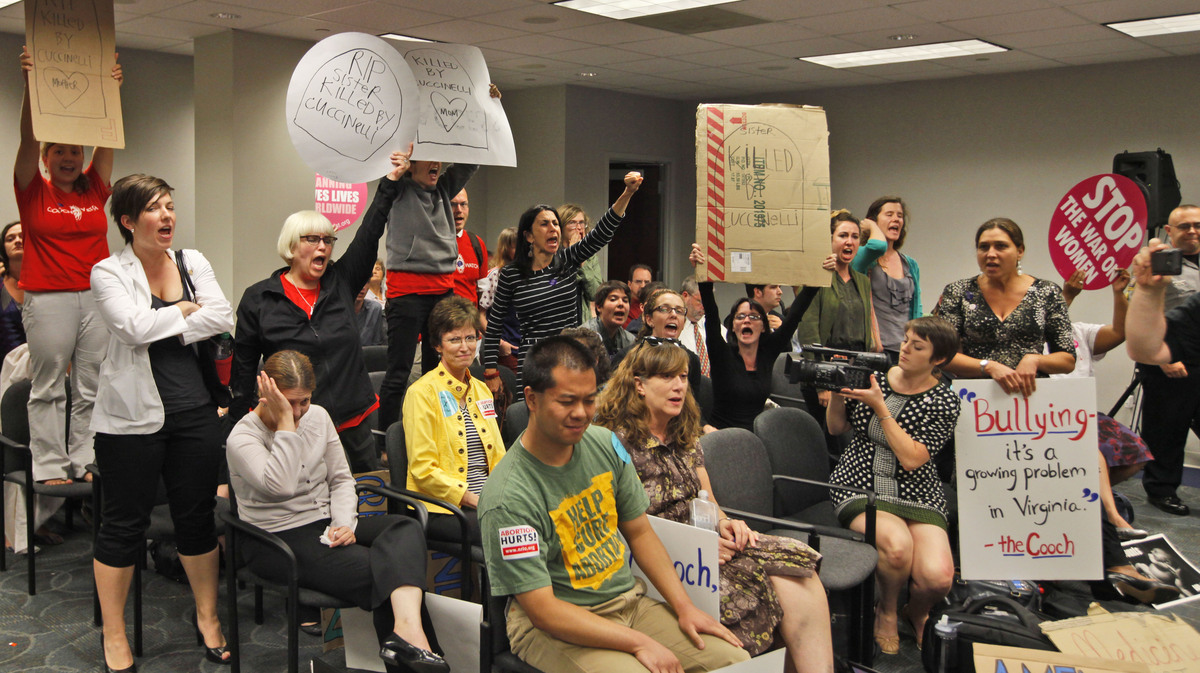 Protesters appeal to members of the Virginia Board of Health after their decision to impose new building regulations on abortion clinics in Richmond, Va., on Sept. 14.

This month marks the 40th anniversary of Roe v. Wade, the famed and widely cited case that legalized abortion. Yet across the country, states are continuing to approve restrictions.

"Obviously I'm a pro-life governor," McDonnell says. "I believe that we ought to do everything that we can to promote the sanctity of human life."

In December, McDonnell issued a prepared statement declaring that the law will help ensure the safety of all patients. Some of the regulations for the 20 Virginia clinics include public hallways that must be at least 5 feet wide, exam rooms that must be at least 80 square feet, and at least four parking spaces for each surgical room.

Julie Rikelman, litigation director of the Center for Reproductive Rights, argues that the law will force many clinics to rebuild or close. "These kinds of harsh, strict regulations are not applied in any other medical context," she explains. "They're only applied to medical practices that also offer abortion services."

Rikelman says the center is considering whether to file legal action in Virginia as it did in Kansas when a court in 2011 blocked enforcement of building regulations on existing clinics.

"The types of services that these centers provide include family planning services, abortion services," Rikelman says. "They're the exact same type of services you get from your regular primary doctor in his or her regular physician's office, and there's absolutely no reason for those services to have to be provided in a hospital-type setting."

Similar Laws Across The Country

In Michigan, about 30 clinics are affected by a law that in part calls for construction regulations on facilities that perform more than 120 abortions a year. In Pennsylvania, one clinic stopped performing abortions after the state required clinics to be built like mini-surgical centers. And, last year, Virginia caused an uproar by proposing the strictest ultrasound law in the country that would have required an invasive vaginal probe.

The president of Virginia Society for Human Life, Olivia Gans Turner, argues the new Virginia clinic rules are necessary. She cites an infamous Philadelphia clinic run by Kermit Gosnell, which state officials called a "house of horrors." Gosnell was charged with eight counts of murder after at least one woman and seven infants died in his office.

"Are they all quite as bad as Gosnell? Perhaps not," Turner says. "But if one woman dies in a facility that could otherwise have been regulated and cared for in a way that would have provided some measure of protection ... who is going to stand for justice for those women, if it isn't the states and their responsibility under their Board of Health?"

Pennsylvania officials ignored numerous complaints about Gosnell, and abortion-rights activists say his office was an aberration, as he clearly operated outside the law.

"They are not about health and they're not about safety," Nash says. "It's a way to bypass a court case to overturn Roe v. Wade and simply eliminate access by regulating abortion providers out of business."

Though McDonnell signed the law, a two-month public comment period is just beginning. Still, that's unlikely to change any of the new clinic rules.