Accessibility links
Future Of U.S. Troops Looms Over Afghan Leader's Visit President Hamid Karzai is in Washington this week for meetings with President Obama and other officials. One of the key issues to be discussed is the number of American troops to remain in Afghanistan after 2014, when the bulk of U.S. and NATO forces leave. 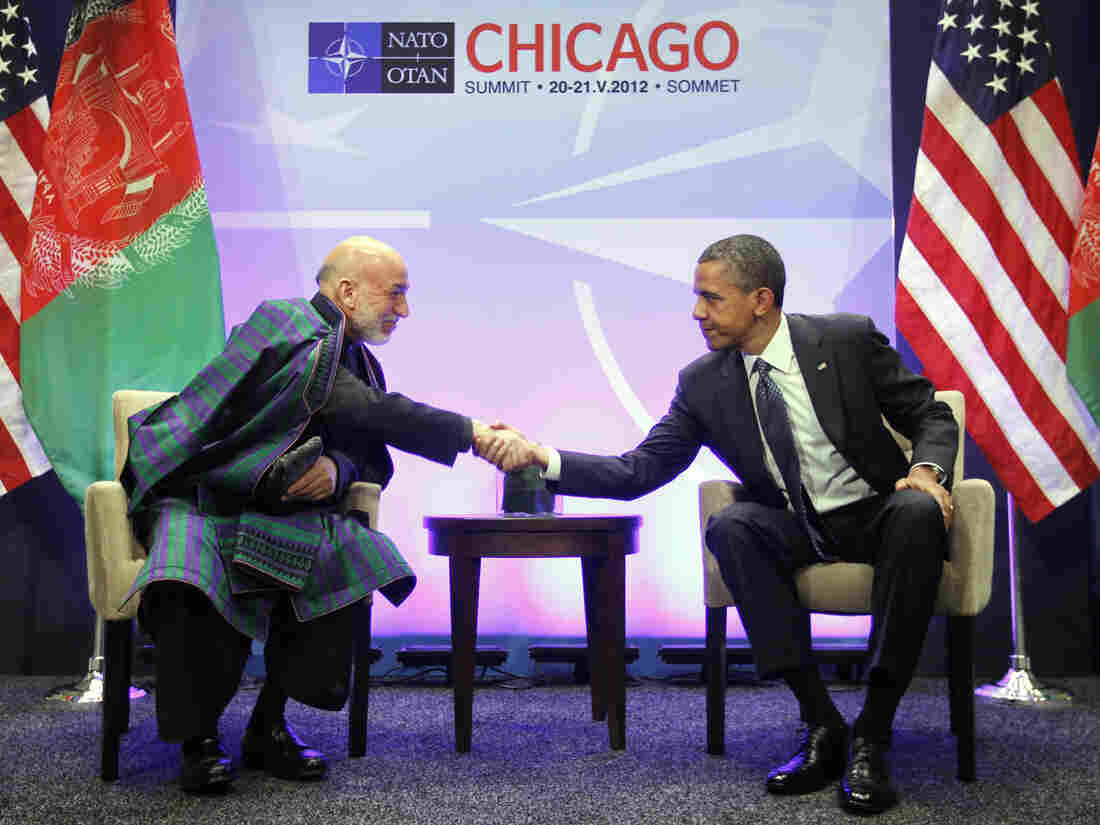 President Obama and Afghan President Hamid Karzai greet each other during a May 20 meeting at the NATO Summit in Chicago. Karzai is in Washington, D.C., this week to meet Obama and other senior U.S. officials. Pablo Martinez Monsivais/AP hide caption 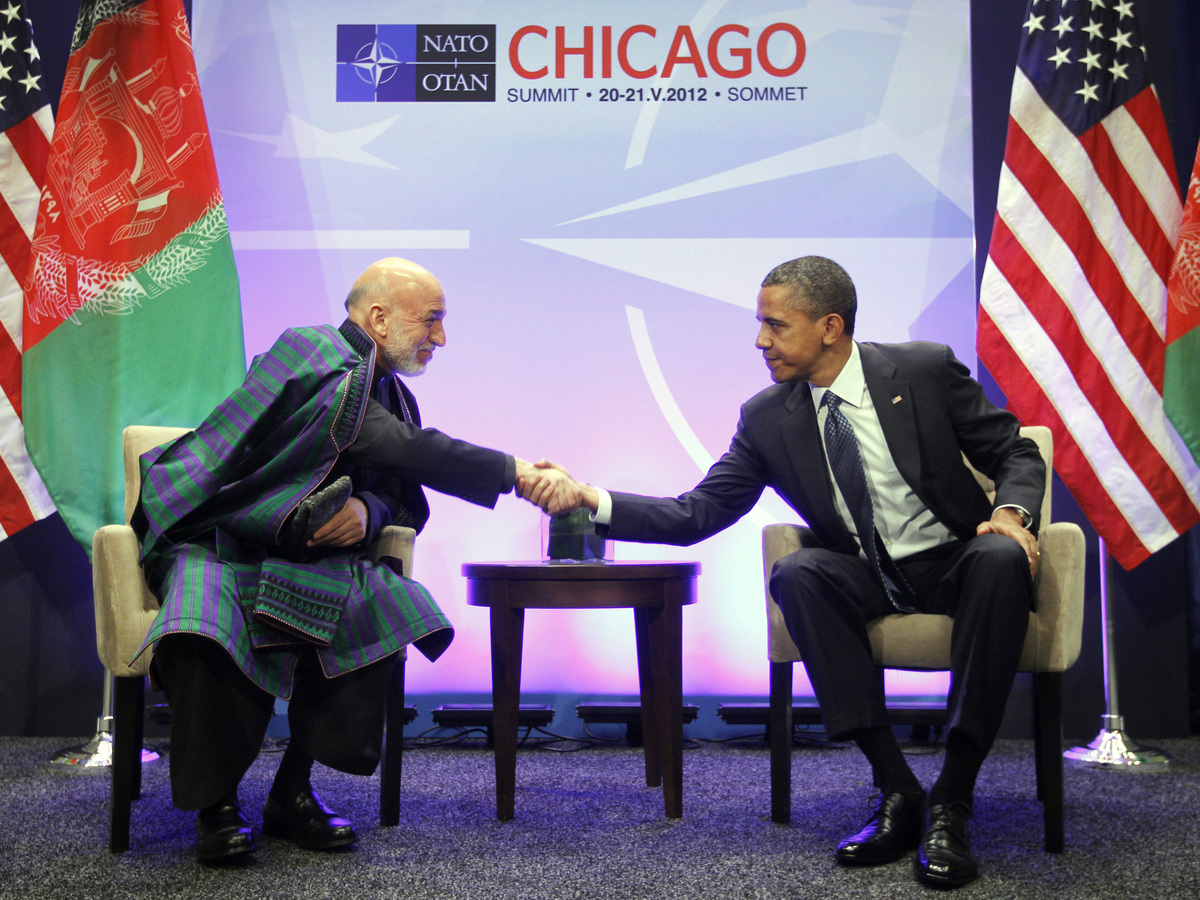 President Obama and Afghan President Hamid Karzai greet each other during a May 20 meeting at the NATO Summit in Chicago. Karzai is in Washington, D.C., this week to meet Obama and other senior U.S. officials.

Afghan President Hamid Karzai is in Washington this week for meetings with President Obama and other senior administration officials. The talks are expected to help set the framework for U.S. involvement in Afghanistan after the bulk of American and NATO forces leave at the end of 2014. One of the key issues to be discussed is the number of American troops to remain in Afghanistan after that date.

Obama and Karzai have met several times in the past, but not always on the best of terms. Regardless of the tone of this meeting, it comes at a critical time, says Andrew Wilder, director of the Afghanistan and Pakistan programs at the United States Institute of Peace.

As Karzai Visits U.S., What Are The Prospects For Afghan Peace?

"It's very significant. Sometimes you have presidents meet once it comes time to sign an agreement, but this one comes at a time when some very important agreements and policies are being negotiated and are very much in flux," he says.

Among those agreements is the bilateral security agreement that would authorize the size of a residual U.S. force in Afghanistan past 2014. At the moment, estimates vary from 9,000 to 15,000 troops for counterterrorism operations and for training Afghan forces. Karzai says he wants a prolonged U.S. security presence, but at the same time he has been increasingly critical of the actions of American troops in Afghanistan.

Wilder, who just returned from a visit to Kabul, says many of Afghanistan's elite are worried about what Karzai may say or do in Washington.

"That whole dynamic within Afghanistan is generating concerns that a meeting that doesn't go well could lead to a decision to bring home the remaining U.S. troops more quickly than I think most Afghans feel comfortable about, because they're worried that could be politically destabilizing," he says.

Obama, facing a war-weary public and domestic budgetary pressure, is expected to soon announce how many of the 66,000 troops now in Afghanistan will withdraw by the end of this year. Tom Lynch, a South Asia specialist at the National Defense University, says Obama, along with Secretary of State Hillary Clinton and Defense Secretary Leon Panetta, will likely be looking for some commitments during their meetings with Karzai.

They hope "that Karzai himself is committed to continuing to improve governance in his country, that he's committed to staying the course in terms of many of the human rights advances, the education advances and the quality of life advances," Lynch says.

They also want Karzai to stay out of Afghanistan's 2014 presidential election. There are some concerns that he may try to extend his term, though he's constitutionally barred from doing so, or try to install one of his family or inner circle in the presidential palace. Lynch says Karzai will need to convince the administration that he will not waver on any of his commitments.

"It's very important that Karzai come here, make a case that America is still a friend, make a case that despite some of the things that have gone on that have been frustrating for Afghans, that there is a need to continue this relationship," he says.

Karzai will be bringing a shopping list with him: He's looking for drones, helicopters and other military hardware.

Anthony Cordesman, with the Center for Strategic and International Studies, says it's unlikely Karzai will get all that he wants. And he adds that a lot could change between now and 2014.

"Trying to predict where we're going to be two years in the future is something we simply can't do, and we can't make promises, and frankly we can't make them but neither can President Karzai, particularly since he isn't going to be in office when we complete this transition," he says.

Karzai is due to give a speech Friday, after several days of meetings with administration officials, including Obama. The speech may be an opportunity to gauge how talks fared between the two leaders.