Accessibility links
New York Town Up In Arms As Gun Show Approaches Saratoga Springs, N.Y., has been host to a popular gun fair for almost 30 years. But in the aftermath of the school shooting in Newtown, Conn., the town has been sharply divided over whether the next show, opening Friday, should continue as planned. 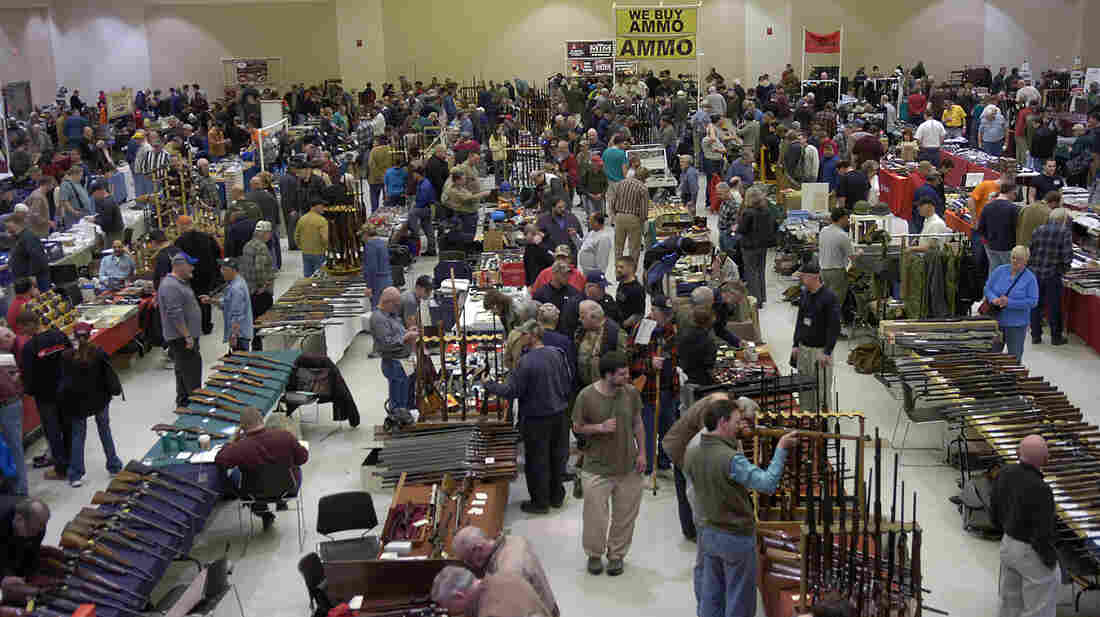 Gun enthusiasts flock to the New Eastcoast Arms Collectors Associates Arms Fair in March 2012 in Saratoga, N.Y. Some local residents would like the next show to be canceled, in light of the Newtown, Conn., school shootings. Ed Burke/Courtesy of The Saratogian hide caption 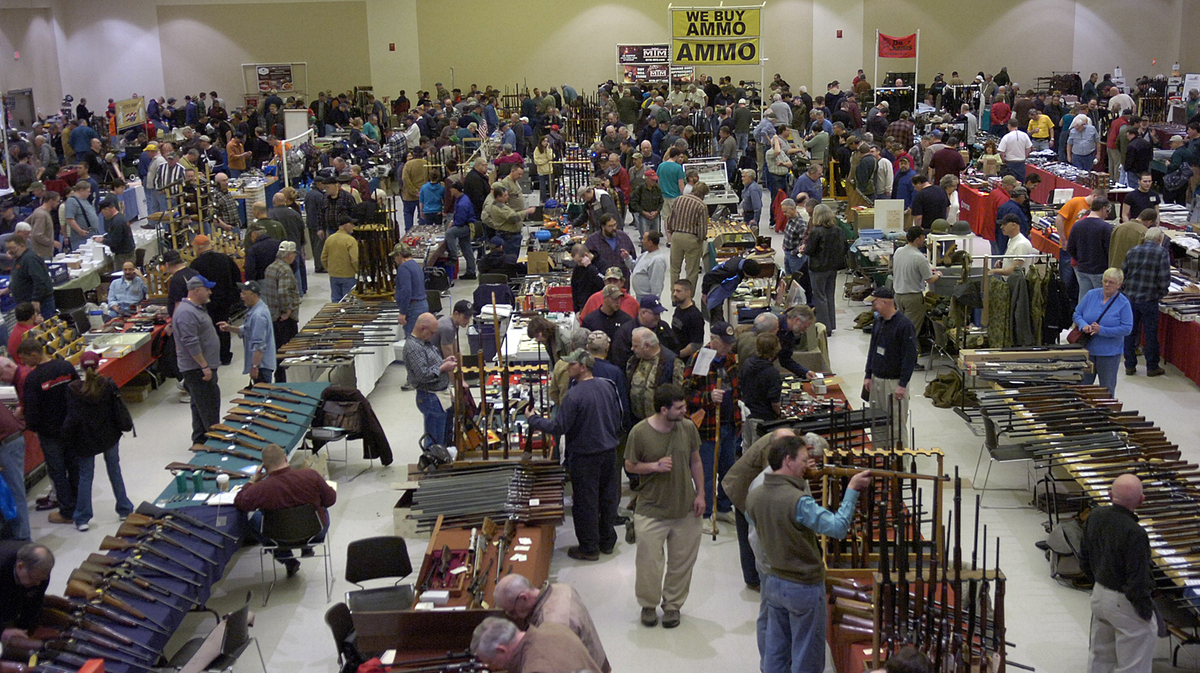 Gun enthusiasts flock to the New Eastcoast Arms Collectors Associates Arms Fair in March 2012 in Saratoga, N.Y. Some local residents would like the next show to be canceled, in light of the Newtown, Conn., school shootings.

Ed Burke/Courtesy of The Saratogian

Saratoga Springs, N.Y., is the kind of town tourists visit and never want to leave. In winter there are skiing and snowshoeing; in summer, the horse racing season at its historic racetrack.

But this idyllic town of about 28,000 in the foothills of the Adirondacks is facing a crisis over the Saratoga Springs Arms Fair, an event held several times each year at the city's public exhibition space since 1984.

David Petronis, the fair's promoter, says the show has been a good event for Saratoga Springs, bringing in hundreds of thousands of dollars to the city. This weekend's event, which begins Jan. 11, "will be our 90th affair at the City Center," Petronis says. "I've got to say, we gotta be one of the oldest and best customers that they got."

But the show's tenure is now being challenged. In the aftermath of the school shooting in Newtown, Conn., local resident Susan Steer was troubled to hear about the upcoming show.

"I couldn't believe it," Steer says. "I was thinking, 'You know, haven't we had enough with guns? Isn't it time to maybe just take a step back?' " 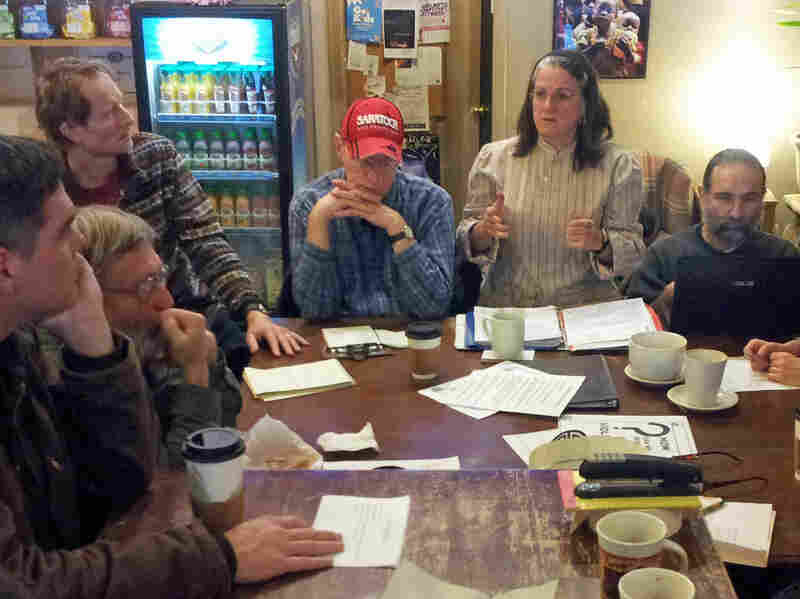 Members of the Saratoga Peace Alliance discuss plans for a street action they plan to stage at the city's upcoming gun show. Dale Willman for NPR hide caption 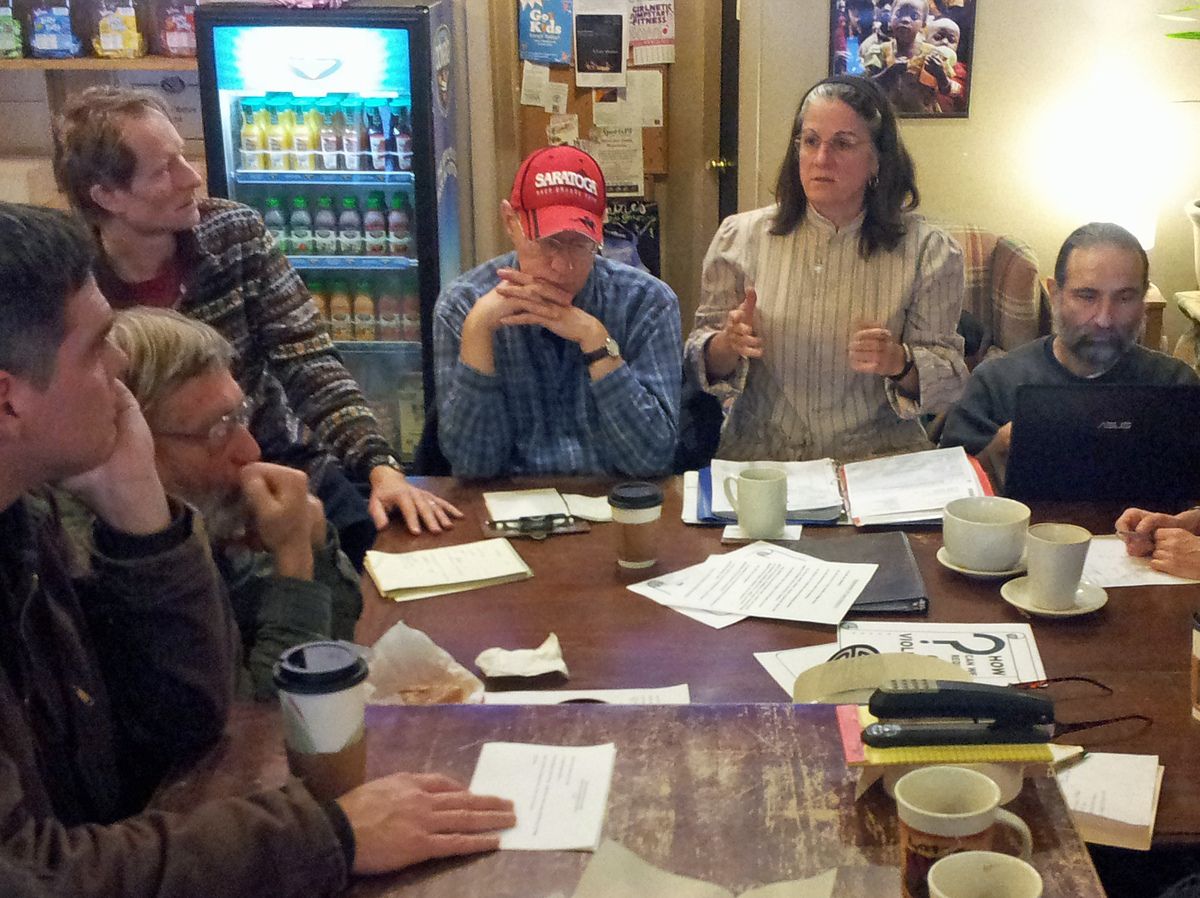 Members of the Saratoga Peace Alliance discuss plans for a street action they plan to stage at the city's upcoming gun show.

So Steer started an online petition at the website Change.org, asking that the show be canceled and a community conversation be held about future gun shows. Some 1,300 people have since signed the petition.

It didn't take long for another petition to be started — this one in support of the show. Written by Robert LeClair of nearby Hudson Falls, N.Y., the petition derides what it calls the "sudden knee-jerk need to ban a perceived threat by the uninformed, ignorant few." That petition has received about 1,800 signatures.

Despite his petition's sometimes harsh language, LeClair says he agrees that something needs to be done about gun violence, but not now. "We can't make the decisions that need to be made at a point like this, when everybody is still emotional," LeClair says. "Everybody is still very upset about what happened, and ... it continues to happen."

While the gun show has gone on for years with little notice, it now seems almost everyone is talking about it. Twelve people spoke about the show during last week's City Council meeting, all but one in favor of its being canceled. And about a dozen people gathered at a local hangout on Saturday to plan a street action at the show.

Members of the Saratoga Peace Alliance say they support legal gun ownership — two members are gun owners. So they're not planning a protest, they say. Rather, member Linda LeTendre says the group wants to ask gun owners to help them figure out how to end gun violence.

"You go to the gun show because that's where the gun owners are," LeTendre says. "And that's where we need to work together to address — really address — the problem of gun violence so that it has a real impact."

While some gun shows scheduled for towns close to Newtown have been canceled since the shooting, others have proceeded as planned. Rochester, N.Y., hosted a show, even though the site was less than 25 miles from the town of Webster, where two volunteer firefighters were fatally shot on Christmas Eve while responding to a house fire.

Petronis, the Saratoga gun promoter, was exhibiting a few tables of guns at the Rochester show Sunday. "Busy place here," he said, describing the event. "AR-15s all over the place. Everybody was happy; nobody went home [and] shot anybody."

Rather than cancel his show in Saratoga Springs, Petronis has agreed to a compromise request from the City Council to not display or sell weapons similar to those used at the Sandy Hook school.

As a result, exhibitors won't have some semi-automatic weapons or high-capacity magazines for sale at the Saratoga show, he says. But he hopes all the attention will end soon so his exhibitors can get back to offering their full array of guns and accessories.