Accessibility links
Gun Control Advocates Say ATF's Hands Have Been Tied The Bureau of Alcohol, Tobacco, Firearms and Explosives is the primary enforcer of the nation's gun laws, but advocates and former ATF officials say agents face legal restrictions that limit their effectiveness. In addition, the agency has been without a permanent director for years. 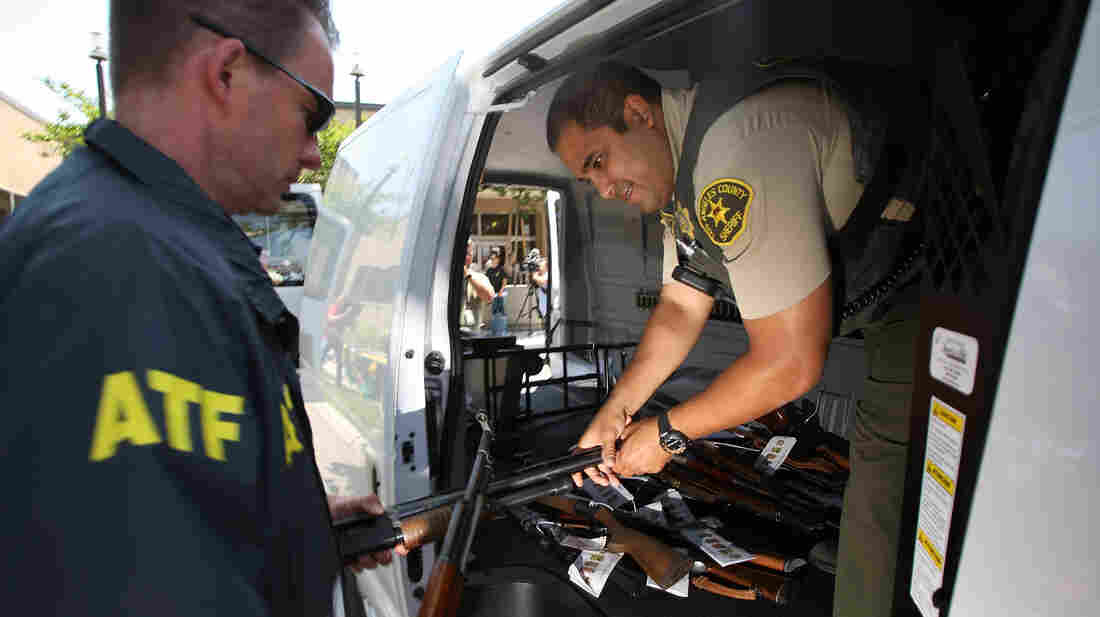 Officers transfer confiscated weapons after a news conference to announce the arrests of scores of alleged gang members and associates on federal racketeering and drug-trafficking charges in Lakewood, Calif., in 2009. David McNew/Getty Images hide caption 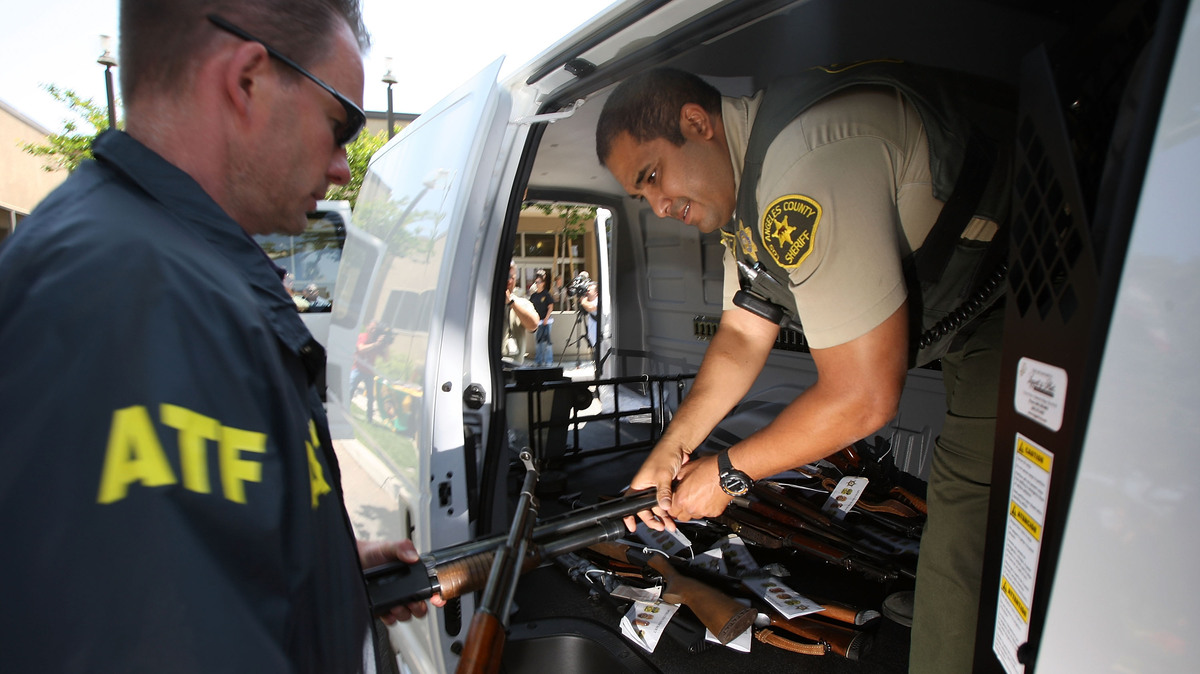 Officers transfer confiscated weapons after a news conference to announce the arrests of scores of alleged gang members and associates on federal racketeering and drug-trafficking charges in Lakewood, Calif., in 2009.

After the school shooting in Newtown, Conn., President Obama asked Vice President Biden to lead a group tasked with drafting policies to reduce gun violence. One of the issues sure to come up in the Biden group's discussions is the role of the Bureau of Alcohol, Tobacco, Firearms and Explosives.

The ATF is the primary enforcer of the nation's gun laws, but advocates and former ATF officials say the agency has been underfunded, understaffed and handcuffed in its abilities to go after gun crimes.

In an ad campaign launched Tuesday by the group Mayors Against Illegal Guns, Roxanna Green, whose child was killed two years ago, appeals directly to the camera: "My 9-year-old daughter was murdered in the Tucson shooting. I have one question for our political leaders: When will you find the courage to stand up to the gun lobby?"

Standing up to the gun lobby is seen by gun control advocates to mean not only banning assault-style weapons and high-capacity magazines, but restoring some teeth to the ATF.

When looking at the problems facing the ATF, it's instructive to start at the top. The current acting director of the Washington agency is B. Todd Jones, who is juggling the ATF post with his other job, that of U.S. attorney in Minneapolis.

There hasn't been a permanent ATF director for six years, since back in the Bush administration.

Michael Bouchard, a former ATF assistant director, says that lack of leadership has handicapped the agency.

"You need somebody there who has ownership and is going to be there for the long haul and can start projecting a couple years out, versus people who are just brought in for a temporary fix," Bouchard says.

Obama has nominated a permanent director, but there hasn't even been a hearing on the nomination because of opposition from the gun lobby.

There are other administrative issues: Funding has been relatively flat, and the agency has roughly the same number of agents today as it did a decade ago.

Then there are the issues ATF agents face with gun laws. Congress refuses to allow a centralized gun database, so tracing a weapon used in a crime means a lot of legwork, says former ATF agent William Vizzard.

"They have to contact the manufacturer or importer, who tells them, 'Oh, on July 14, 2009, we shipped that gun to Buckeye Sporting Goods, a wholesaler.' Then you contact Buckeye Sporting Goods, and they say, 'Oh, yeah, we received that gun four days later and we shipped it out to Billy Bob's Bait and Tackle Shop.' Then you go to Billy Bob and you say, 'OK, what do your records say?' "

Another frustration, says Bouchard, is the lack of gun-trafficking statutes to charge those suspected of supplying guns to criminals.

"It's very frustrating when you see people that you know are criminals and buying guns for the criminal element, and you don't have ... a statute to prosecute them under," he says. "You have to be creative and try to make other statutes fit."

Advocates also say the ATF should be allowed to inspect firearms dealers more than once a year, and that dealers should be required to keep track of their inventory.

The Brady Center's Lowy says that more than 100,000 guns are missing from dealers' shelves.

"There's a great likelihood that most of those guns were sold off the books to criminals," he says. "Easy way to fix that is to simply require dealers to do an inventory every year of their stock. ATF is prevented from even requiring dealers to do that. That makes absolutely no sense."

Former ATF officials have written Biden with suggestions to correct what they see as the agency's problems. Lowy and other gun control advocates will be meeting with the vice president Wednesday to make their case for changes at the ATF.