Accessibility links
Bobby Cannavale, At Home On Broadway The actor, who's currently starring in Glenngarry Glen Ross opposite Al Pacino, has been acting for the stage since he was a teenager in Union City, N.J. "It was the only thing I ever wanted to do, really," he says. 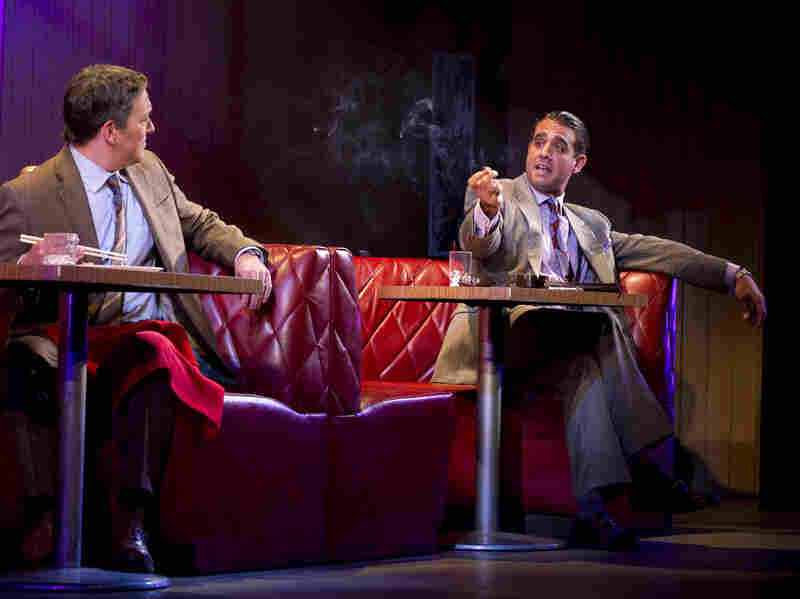 Bobby Cannavale (right) stars in Glengarry Glen Ross on Broadway. Cannavale has also starred in television shows such as HBO's Boardwalk Empire and in films such as The Station Agent. Scott Landis/JRA Broadway hide caption 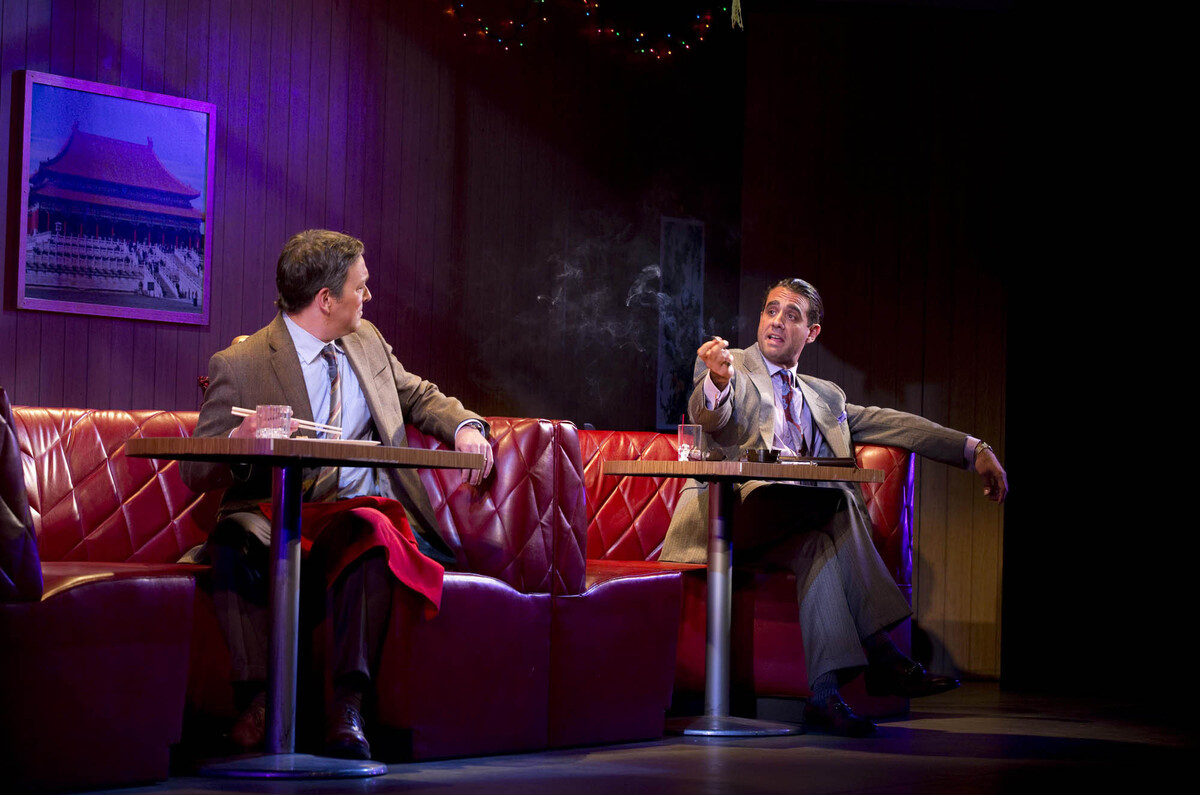 Bobby Cannavale (right) stars in Glengarry Glen Ross on Broadway. Cannavale has also starred in television shows such as HBO's Boardwalk Empire and in films such as The Station Agent.

Bobby Cannavale may have acted in film and on television, but at heart, he's a theater guy. Always has been, always will be.

Last season he starred as Gyp Rosetti on the HBO series Boardwalk Empire. He's currently on Broadway opposite Al Pacino in David Mamet's Glengarry Glen Ross -- but the stage has been his calling since he was a kid growing up in Union City, N.J.

That's where he discovered the theater directory yearbook at his local library. That yearbook led him to the classics, from A Streetcar Named Desire to Death of a Salesman, and while he may not have necessarily understood what was happening when Stanley was yelling at Stella, something about the plots and characters of these plays resonated.

"I was just drawn to them," he tells Fresh Air's Dave Davies, "because in my head I heard the voices. I would act out the parts in my head. So it was the only thing I ever wanted to do, really."

From there, he acted in every production he could at the Catholic schools he attended growing up.

"I was an altar boy in an incredible monastery that was attached to a rectory," he says. "The theater of the church is the most incredible theater, and in this church, it was beyond. It was this huge monastery. It was landmarked. It's a beautiful building, and I kind of had the run of it. ... And they did like three shows a year, and I was in all of them. My first one, I was like 10 or 11. It didn't matter if there weren't any kids in the show, I was in them. Like, I was in Guys and Dolls playing a gangster when I was like 12."

Cannavale, who won a Tony last year for his role in The Motherf- - - -r with the Hat, has come a long way from the Union City public library and Catholic school. After years of working New York clubs until 5 a.m. so he could keep acting, Cannavale broke out in the 2003 indie film The Station Agent. He remembers attending Sundance that year and, almost as soon as he arrived, hearing that the movie — a labor of love for its actors and writer-director Tom McCarthy — was the buzz of the festival. With that, Cannavale's club-working days were over.

On how he came to act in Glengarry opposite Al Pacino

"Two years ago, two Tonys ago ... I was fortunate enough to be nominated for the Best Actor category, and so was Al — who I wouldn't have called Al four months ago, but now I can call him Al — and I'd never met him before, and he's my favorite actor and I'd always wanted to meet him, and I'd always wanted him to come to see a show. ... It was kind of like a little thing I'd say in my head, 'Pacino's coming tonight,' you know, whenever I'd do a play.

"And so they sat me next to him, and I just leaned over to him and I introduced myself and he said, 'I know who you are.' And I said, 'I would love it if you could come see our show.' And he said, 'I'm coming, I'm coming.' And he came [for] the last show and stayed in my dressing room for — gosh — over an hour, just talking to me. It was amazing, and when he left he said, 'We're going to do it.' And I got a phone call about three months later asking me if I'd be interested in reading and taking a look at Glengarry with Al playing The Machine and myself playing Richard Roma."

On why actors love Glengarry

"It's one of those plays that actors talk about and say, 'It's a perfect play.' And it's a perfect play because it's about, you know, seven guys who desperately want something and need something at a time when people desperately want and need things. It was written, you know, in 1982. I think it's a prescient play to do today, but let's face it, I mean, I think great plays are about people wanting things, [being] desperate for things. I think [that's] what makes great drama, and I think that's one of those things that's just always resonant. It's just what we are as a culture and in America in particular."

"I think that is what makes it the living, breathing thing it is. We joke about it sometimes, you know. We'll get together at the curtain call. We all come out. The curtain's down, and there's the quick four-word review from everybody, you know: 'Not bad.' Last night, Johnny actually said, 'Solid B. Solid B, guys.' ... It happens. Maybe somebody's not as desperate, let's say, it throws it off. It throws it off, but not necessarily in negative ways. It just means that one guy gets eaten a little easier than he did the night before. ... I know yesterday I was late because the train took forever, so I was rushing the whole time and went out not quite prepared, and something else happened."

On seeing The Station Agent become a hit

"We always thought it was a good movie, but I never thought it would do what it did. I was just so excited to finally do it, and we made it in 17 days over the summer in New Jersey. Just to give you perspective, the last episode of Boardwalk Empire took 18 days to shoot. And so we shot that movie for nothing and, you know, I'm wearing my own clothes. ... So there are elements of that movie that have a very true spirit about them. That makes me really happy. ... I'm really proud to be a part of that."

On the elaborate sets and costumes for Boardwalk Empire

"Everyday felt like I was coming to work in a theme park because everything around you — every stitch of clothing I wore — was handmade with vintage fabric from the time, and every prop is from its time. The lighters are very difficult to work and the cars, and, you know, they spare no expense. So it's not like you see the same car driving back and forth in the background — there's 30 cars. Packards and Model Ts. ... So it definitely makes it a very immersive experience, [and it's] easier to work when you're surrounded by it all like that."