Accessibility links
Wary Of Syria's War, Israel Plans A Fence In The Golan Heights Some 20,000 Israelis now live in the Golan Heights, and so far, the Syrian conflict has had little impact on their lives. But Prime Minister Benjamin Netanyahu says he's concerned the fighting could pose a threat. 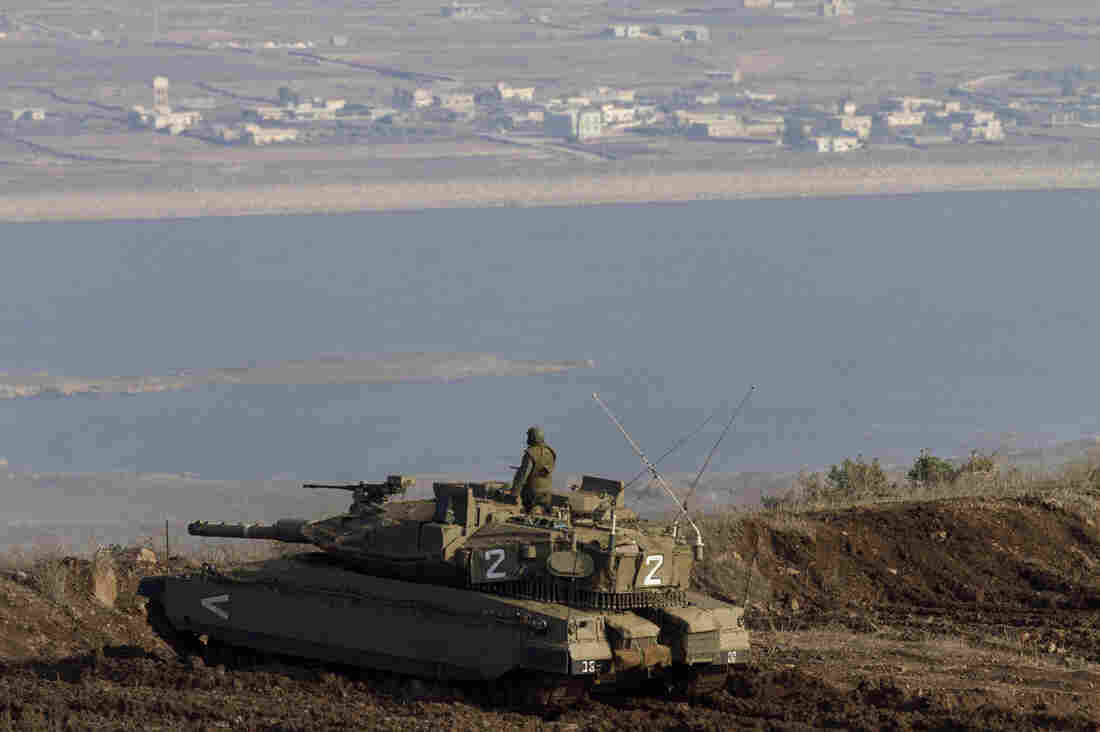 An Israeli tank in the Golan Heights overlooks the Syrian village of Bariqa in November. Israel, which captured the Golan Heights from Syria in 1967, says it's building a fence there because it's concerned about spillover from the Syrian war. Ariel Schalit/AP hide caption 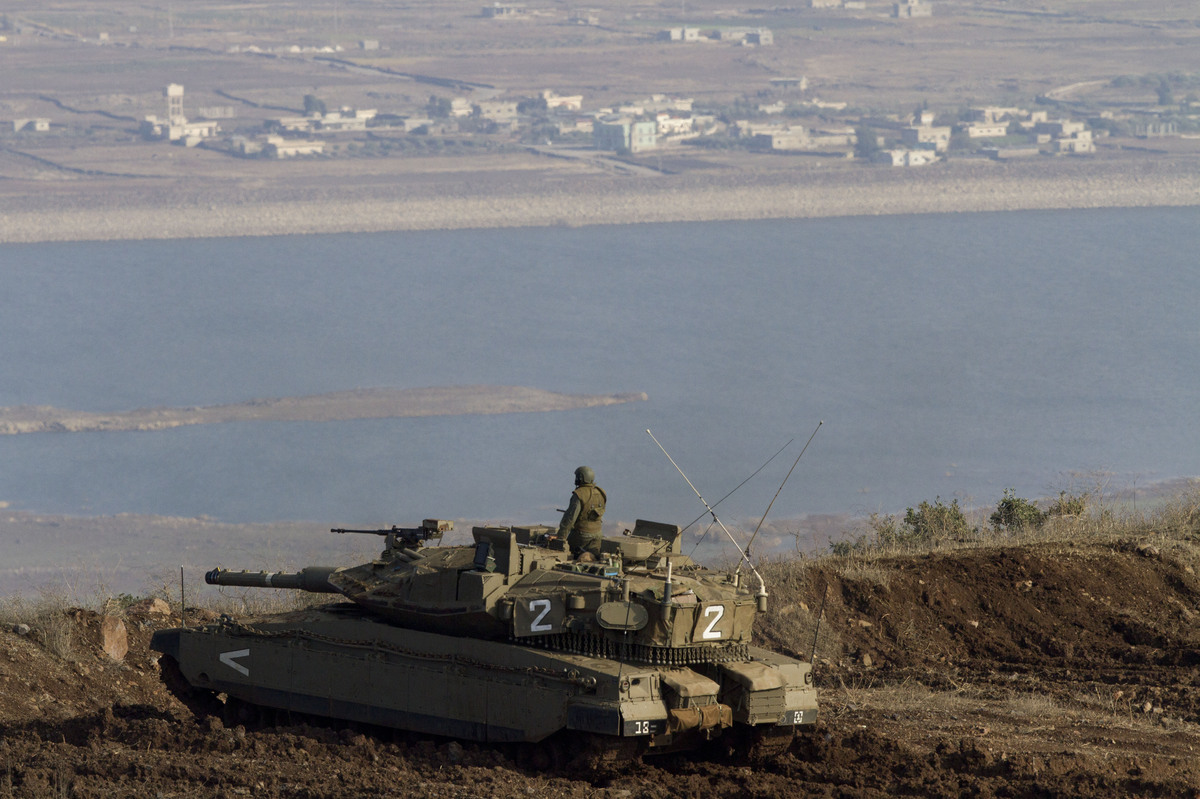 Concerned about spillover from Syria's civil war, Israel says it will build a fence in the Golan Heights along the line that has effectively served as the border since wars between them in the 1960s and 1970s.

Prime Minister Benjamin Netanyahu, who recently made the announcement, says he's concerned about Syrian rebel groups that have succeeded in capturing areas close to the frontier. He says that building the fence, which would extend for more than 40 miles, is a precaution.

Israel captured the Golan Heights from Syria in the 1967 Mideast war, and subsequently annexed the territory, a move that no other nation has recognized. Syria has demanded that Israel return the territory, but at present it is home to about 20,000 Israelis.

One of them, Yael Saperia, was sitting at a cafe just a few miles from the boundary with Syria. A few months ago, an errant shell fired by a Syrian tank landed in her neighbor's backyard. The village, Alonei Habashan, is one of the closest to the Syrian frontier. But she says that the nearby violence is hardly felt in Israel.

"We are getting information through the army to go on with our regular lives," she says. "We go to work, your kids go to school. I mean, we haven't changed anything."

Israel has announced plans to build a fence in the Golan Heights, saying radical Islamist groups have taken over Syrian villages near the boundary with Israel. CIA World Factbook hide caption

Israel has announced plans to build a fence in the Golan Heights, saying radical Islamist groups have taken over Syrian villages near the boundary with Israel.

Netanyahu Points To Instability In Syria

Despite the relative quiet, Netanyahu says Israel should build the fence.

In a transcript released after last Sunday's Cabinet meeting, Netanyahu was quoted as saying that the Syrian army has moved away from the area while jihadist forces have moved in. Netanyahu added that the Syrian regime is very unstable, and that the fence will protect Israel from both infiltration and terrorism.

In a recent tour of the Golan Heights, scattered gunfire and explosions could be heard coming from inside Syria.

Amos Harel, defense correspondent for Israel's Haaretz newspaper, says that the Israeli defense establishment sees little chance that the Syrian army would launch an attack on Israel at this stage.

But, standing on the ruins of a bunker used by Israeli soldiers in the 1973 Arab-Israeli war, he said a conventional attack is not the only concern.

"There is the problem of al-Qaida, chemical weapons, whatever you'd like. But not the conventional warfare of divisions," he says.

Harel says Israel is concerned about the increasing strength of various rebel groups along the frontier. He says the rebels have used the area to play cat-and-mouse games with the Syrian army.

"The presence of the Israeli forces close by is a sort of a shield ... against Assad loyalists' military activity. This is not something Israel is happy about, but it's quite logical for rebels to use this method," he says.

In a background briefing given to NPR, an Israeli intelligence officer said Israel has increased efforts to gather information about the Syrian rebel groups, especially those with links to hard-line Islamist movements.

The officer said that in the past few months, rebels have managed to take control of large swaths of territory, including areas close to the Israeli border.

Many groups seem focused solely on overthrowing President Bashar Assad, though Israel is worried about a handful that have already promised to turn their attention to Israel if Assad is ousted.

Moshe Maoz, a professor of Middle Eastern Studies at Jerusalem's Hebrew University, says the Israeli leader is rushing to build a fence.

Netanyahu "wants to do it because he's afraid that if a radical Islam organization takes over, Israel will be in danger," Maoz says. "But my analysis is the possibility of them taking over is slim."

Maoz says Netanyahu's announcement of the border fence was well-timed, with parliamentary elections now less than two weeks away.

"Thinking about the forthcoming elections, Netanyahu does everything possible to induce the public to vote for him," Maoz adds.

Maoz says that with the campaign in full swing, Netanyahu wants to reassure the country that he's strong on security issues.