Accessibility links
Buyback Program Gets Some Guns Off Mexican Streets In Mexico City, the government is offering cash, new bikes and computers for guns. The mayor says the buyback program is taking dangerous weapons out of commission. But mayors of some cities overrun by drug traffickers say law-abiding citizens need guns for protection. 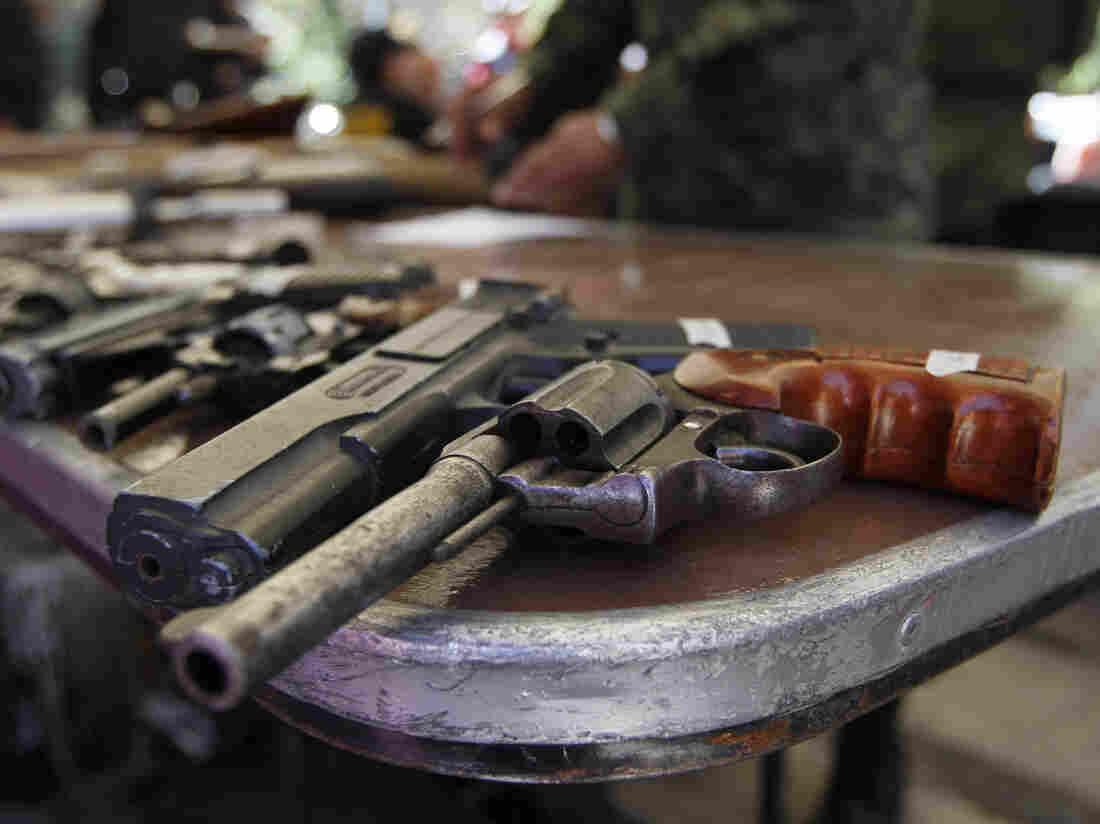 These weapons, in the Iztapalapa neighborhood of Mexico City, were handed over by their owners during a government program that accepts weapons in exchange for bicycles, computers, tablets or money. Marco Ugarte/AP hide caption 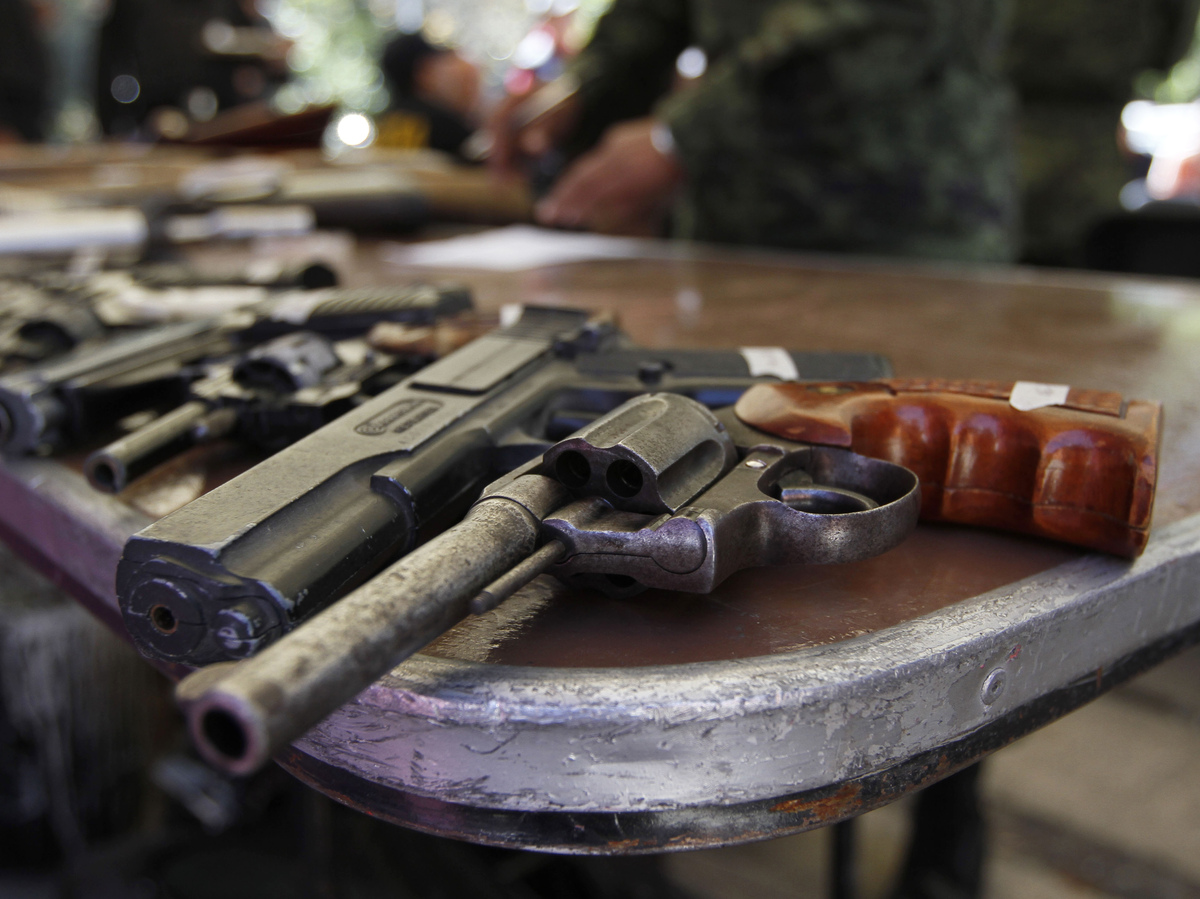 These weapons, in the Iztapalapa neighborhood of Mexico City, were handed over by their owners during a government program that accepts weapons in exchange for bicycles, computers, tablets or money.

In Mexico, a country plagued by drug cartel violence, the mayor of the capital city is offering residents cash, new bikes and computers in exchange for their guns. He says the buyback program will get dangerous weapons out of the hands of residents and make the streets safer.

But not all mayors in Mexico — where it's extremely difficult to legally buy a gun — are rushing to replicate the program. In fact, in cities overrun by drug traffickers, some say law-abiding citizens should be able to have them for protection.

On a recent day during the buyback, Florentino Olmos sits in a line of folding chairs on the huge esplanade of Mexico City's Basilica of Our Lady of Guadalupe. On his lap is a .22-caliber automatic pistol. He and about two dozen other armed residents wait their turn to hand over the weapons, no questions asked, to a member of the Mexican army.

Olmos, 53, drives a taxi for a living. He says he got the pistol about a year ago after a traffic accident. The guy who hit him couldn't pay for the damage to Olmos' car, so instead gave him the pistol as collateral. The guy never came back. 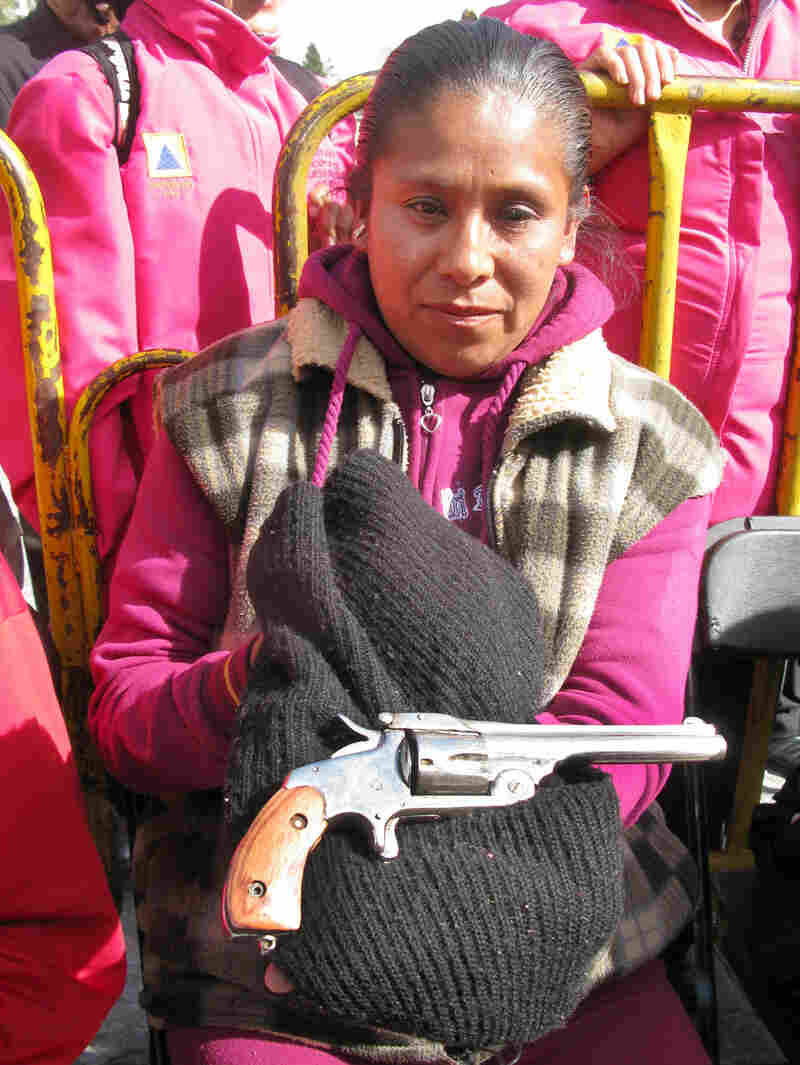 In Mexico City, Sara Martinez Franco holds a .38-caliber revolver that belonged to her grandfather. She traded in the weapon — which she says was used during the Mexican Revolution — under the buyback program. Carrie Kahn/NPR hide caption 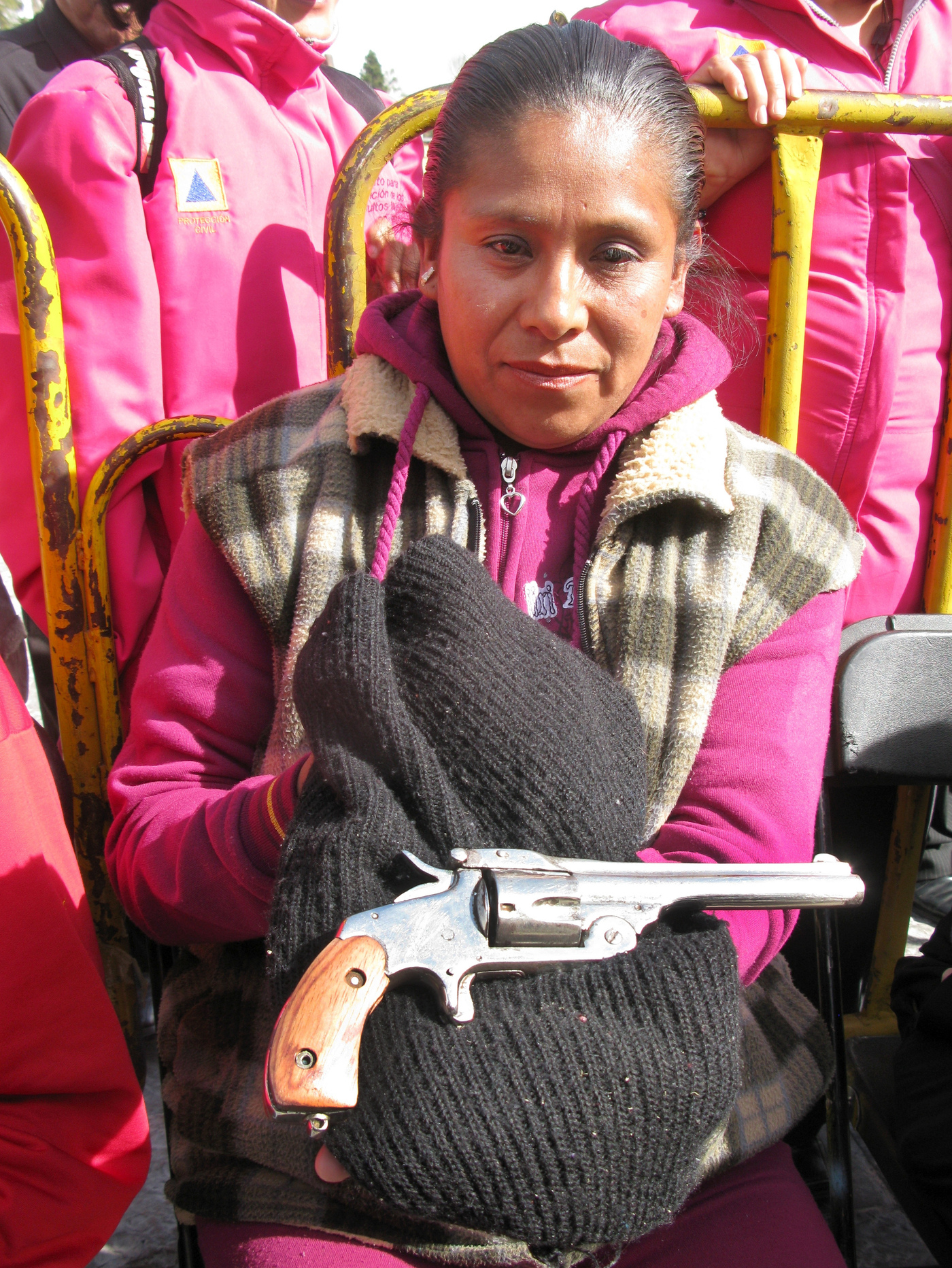 In Mexico City, Sara Martinez Franco holds a .38-caliber revolver that belonged to her grandfather. She traded in the weapon — which she says was used during the Mexican Revolution — under the buyback program.

Olmos says he heard about the buyback program on TV and brought the weapon down. He's glad to get rid of it legally.

Few guns are legally purchased and owned in Mexico. Not only are sales highly limited, getting a permit is difficult and must be granted by the Mexican army.

The buyback program started three weeks ago and already authorities have retrieved nearly 1,500 weapons, including a grenade launcher. One man turned in 19 guns.

Mexico City Mayor Miguel Angel Mancera tells the crowd gathered on the church grounds that he hopes the program will bring peace to the city.

Mancera says the government wants to trade these weapons for computer tablets and other goods that will bring education into homes instead of violence.

The program has been so successful, according to the mayor's office, that they've expanded it to other regions of the city and have even started sending brigades of city workers door-to-door to urge residents to turn in their guns.

Mexico City's crime rate has been dropping in recent years, making it one of the safest cities in the country. But in towns overrun with drug violence, especially those near the U.S. border, some mayors are taking the opposite approach and urging authorities to let residents own weapons.

Jose Eligio Medina is the mayor of Concordia in the state of Sinaloa, home to the powerful cartel run by Mexico's most wanted trafficker, Joaquin Chapo Guzman. He says he thinks residents, especially those living in the rural and dangerous areas of Mexico, should be able to protect themselves.

He says that he doesn't think everyone should have a gun, but that they should be able to form self-defense brigades — a proposal that is gaining attention.

But Luis Wertman, who runs a nonprofit citizen safety group in Mexico City and helped organize the gun buyback program, says arming citizens is not the solution.

"At the end, it works against the society. It doesn't bring you better quality of life, it doesn't give you more security; it generates worse things for the society," Wertman says.

Olmos says he could have gotten 4,000 pesos for the weapon on the black market. But this way he knows that no one will be hurt, and that the gun is safely off the streets.