Accessibility links
Clinics Come To The Rescue Of Ethiopia's Overworked Donkeys In Ethiopia, there's a saying in rural areas: "A man without a donkey is a donkey." Donkeys are both a livelihood and a lifesaver for farmers, and when they fall sick, there are special donkey hospitals to treat them. 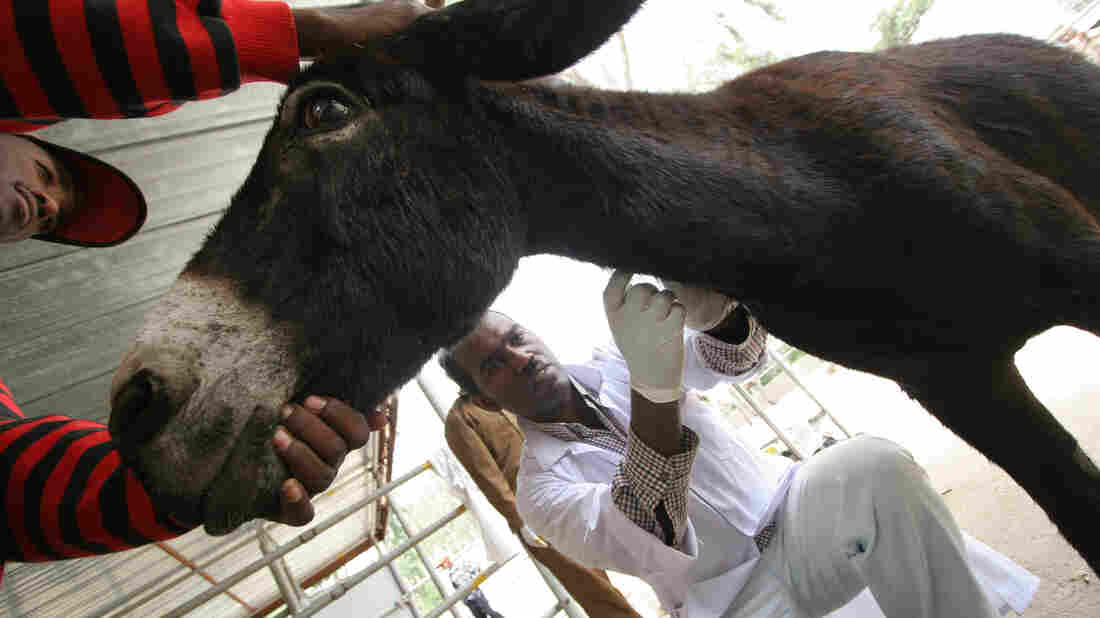 A donkey bitten by a hyena is checked by a veterinarian as the owner calms the animal at The Donkey Sanctuary, a clinic near Ethiopia's capital, Addis Ababa, in 2005. Boris Heger/AP hide caption 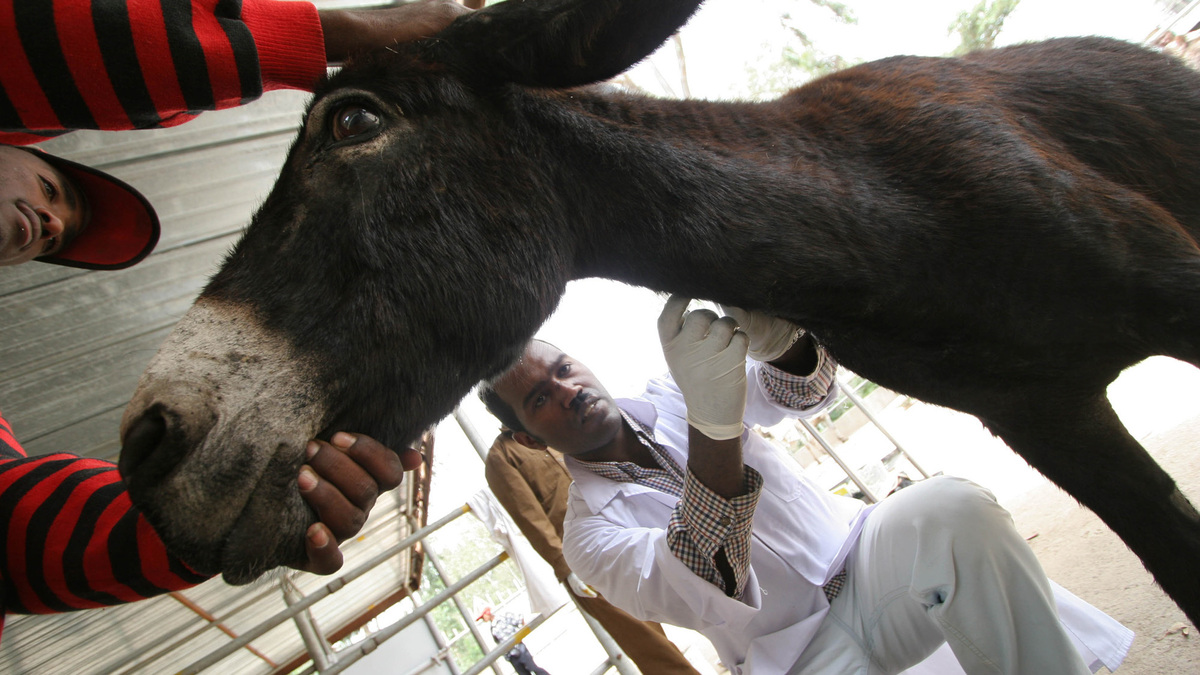 A donkey bitten by a hyena is checked by a veterinarian as the owner calms the animal at The Donkey Sanctuary, a clinic near Ethiopia's capital, Addis Ababa, in 2005.

In Ethiopia, the donkey is more than just a beast of burden.

The Horn of Africa nation is home to more than 6 million donkeys and comes second only to China in global donkey numbers. The country is both donkey heaven and donkey hell, but though the animal is highly prized, it can also be mistreated.

"In Ethiopia, there's a good saying: 'A farmer without a donkey is a donkey himself,' " says Bojia Endebu, a veterinary surgeon and seasoned donkey doctor. "Because the donkey does lots of work, so they are very valuable for Ethiopian farmers."

Bojia is in charge of The Donkey Sanctuary, which has clinics in four of Ethiopia's nine regions. The sanctuary began operating in 1986, and now offers free treatment at two stationary and seven mobile clinics.

"I can say donkeys are the backbone of transport in the rural community of Ethiopia," he says. "The objective of The Donkey Sanctuary ... is to improve the quality of life of the donkey in Ethiopia."

Donkeys In The City

On the outskirts of the capital, Addis Ababa, in the high-density Markato neighborhood, you have to take care not to bump into donkeys. They're everywhere; trotting with loads on their backs in the middle of traffic, the donkeys seem oblivious of cars, humans and building sites.

The presence of the donkeys is like a time warp in stark contrast to a city that is modernizing dramatically.

At a huge wholesale grain market in Markato, smallish donkeys do the heavy lifting, going back and forth between the wholesale and retail customers. Tucked a half-mile away from the busy market, Dr. Chala Chaburte and his team have begun a day of consultations at the Markato Donkey Clinic.

Chala says he owes a personal debt of gratitude to donkeys, because the work of his family's two donkeys helped pay his medical school fees.

"I love donkeys, because I grew up in the countryside. I know the contribution of donkeys in my life," Chala says. "That is why as soon as I graduated from the university, I joined ... The Donkey Sanctuary."

Donkeys are the backbone of poor people in Ethiopia, Chala says, especially poor farmers. But because they work so hard, they suffer injuries that range from being hit by cars to stepping on nails.

Then there is tetanus, anthrax, hyena bites, back sores from overloading, and colic from the indigestible plastic bags the donkeys have swallowed.

At the clinic, about half a dozen donkeys — suffering from all manner of ailments — are penned into a spacious enclosure with a large water trough, waiting to be seen by Chala. Countrywide, the clinics treat an average of 400,000 donkeys each year.

"[There are] a lot of problems here in Addis [Ababa], especially, because of the people," he says. "[They] do not give attention for their animals. As a culture they accept it that donkeys can carry or resist every problem."

Chala says they work to educate owners and donkey drivers to change their attitudes. It is well-known that donkeys are the most neglected animals in the country, he says, and The Donkey Sanctuary is the only place that helps them.

"The intervention of The Donkey Sanctuary brought a big change to the attitude of the people, as well as on the health and welfare of the donkeys," he says.

Tadesse Kasa, a tall man with crooked teeth and a disarming smile, brought his donkey, Bula, for examination and treatment. The doctor says the donkey is lame because of small stones and sharp materials lodged in its hoof. The hoof is scraped out, cleaned with iodine and strapped up.

Tadesse and other owners say that donkeys are their good friends.

"We work with them and get our income from our donkeys, because they transport our loads," he says. "Donkeys are very important to our families. Without them, we wouldn't be here, so it's our responsibility to make sure our donkeys are in good health."