Accessibility links
Mississippi Blues: When The River Doesn't Run The drought that damaged crops in the Midwest last summer has brought the water level to historically low levels. Now barge traffic along a vital stretch of the Mississippi is dangerously close to running dry, putting shipping and jobs at risk. 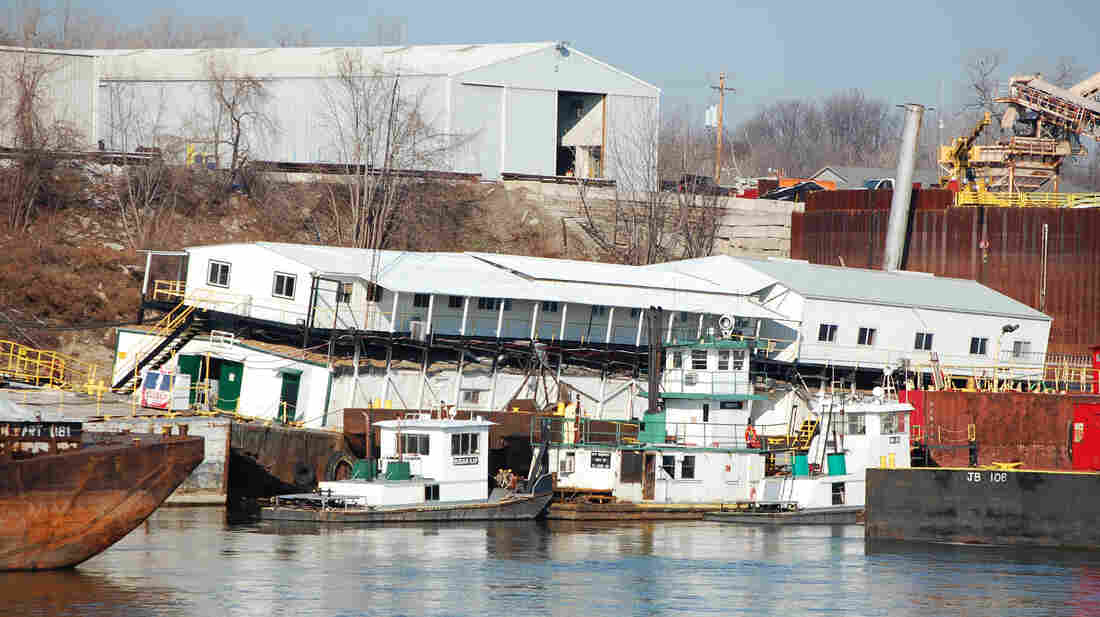 The offices of JB Marine, a barge cleaning and repair business that is located atop an empty barge just south of St. Louis, now lean at a 30-degree angle because the Mississippi River levels are so low. Alan Greenblatt/NPR hide caption

The Mississippi River has provided George Foster with a living all his life. Now, with the river dropping to historically low levels, it's threatening to take his business down with it.

Foster's office sits atop an empty barge on the river, just south of St. Louis. His building tilts at a 30-degree angle because the water is so low. Visitors may want to stick out their fingertips for balance walking down his narrow hallway.

Foster is moving his office space to temporary trailers on higher ground, but that's not going to improve general operations at his company, JB Marine Service, which cleans and repairs barges that ply the Mississippi. With traffic so badly reduced, Foster's business has been down about 55 percent for the past three months.

"From all the indications we're getting from the [Army] Corps of Engineers, it's going to get dramatically worse," Foster says. 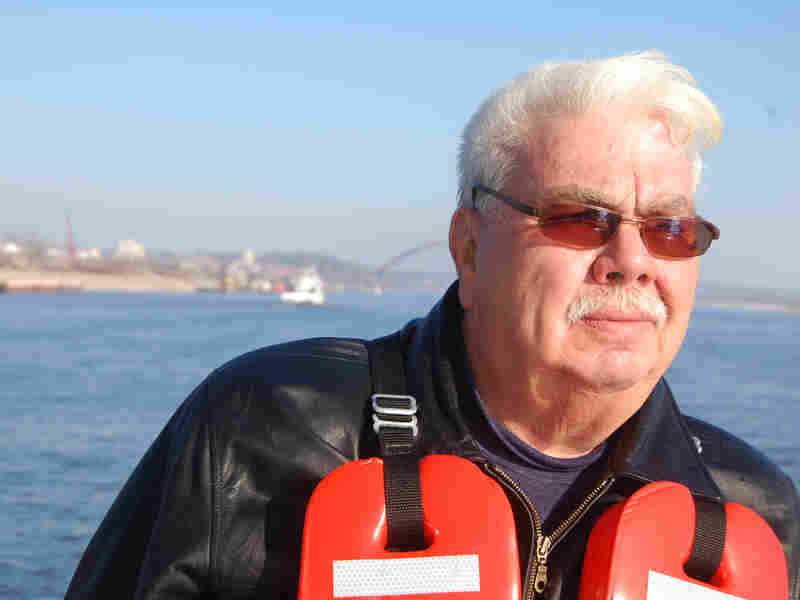 George Foster, president of JB Marine, says he hasn't had to lay off any of his 110 employees but wonders when he'll see enough barge traffic to keep all of his workers busy. Along the affected stretch of the Mississippi River, some 8,000 jobs are thought to be at risk. Alan Greenblatt/NPR hide caption

The Corps has said its program of blasting rock more than 100 miles south of St. Louis to deepen the riverbed should alleviate the most dire concerns of shippers: that the drought-shrunken river could shut to barge traffic entirely this month.

The low water levels have already had a dramatic impact on shipping, increasing costs and putting thousands of jobs at risk. At some point, it becomes a losing game to run barges that are filled far from capacity in order to keep them from scraping the river's bottom.

"The cost and time of transport of the river have gone up dramatically," says Richard Calhoun, president of Cargo Carriers, the logistics subsidiary of agricultural products giant Cargill. "In some cases, we've been unwilling to sell grain that we don't know we can get from origin to destination."

The Mississippi River extends for more than 2,000 miles from Minnesota on down to Louisiana. The current problems are concentrated within a 200-mile stretch from St. Louis south to Cairo, Ill.

North of St. Louis, the Army Corps of Engineers has maintained a lock-and-dam system since the 1930s that keeps the river at navigable levels. Were it not for that system, the river might have shut down between Minnesota and Cairo back in August, says Dennis Wilmsmeyer, executive director of the Tri-City Regional Port District in Granite City, Ill., just north of St. Louis.

"The lock-and-dam worked marvelously in keeping the Upper Mississippi open," he says. "We've been busier than ever."

South of Cairo, the Mississippi is replenished by the Ohio River. Butler Miller is president of a barge company based in St. Louis County, but he has diverted much of his fleet to the southern stretches of the river.

"We can't load in St. Louis, we move to Cairo, Ill., or Greenville, Miss.," says Miller. "Instead of having 10,000 barges working the whole river system, all of them are working other places, which takes a big cut from profitability."

Bigger Than You Think

Barges are a "hidden industry," Wilmsmeyer says, a mode of transport the vast majority of Americans has no reason to think about. But they are a crucial means for moving all manner of goods. 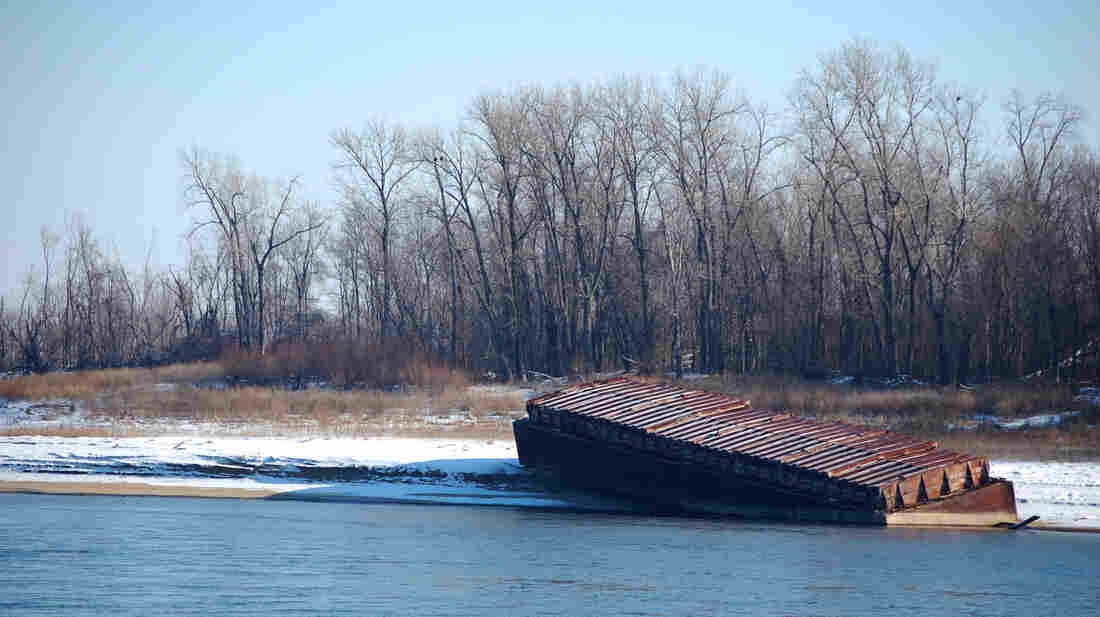 The river has fallen fast enough that barges have been beached along its banks outside St. Louis. Alan Greenblatt/NPR hide caption

They're sort of like the containers dragged along by trucks, only bigger. Barges heading south along the Mississippi River are likely to be carrying agricultural commodities — corn, soybeans, rice — that will be loaded onto ships at New Orleans for export.

Barges are loaded as they come back north, too. Much of the road salt that the Midwest relies on to keep winter roads open comes from salt mines on an island in Louisiana that can't be accessed by truck or rail. Northbound barges may be carrying petroleum products or the fertilizer farmers start to spread in February.

But now there are few barges moving up and down the river. The rock-blasting at Thebes, Ill., should help to keep boats moving, but for the moment, it has cut the window for barge traffic to just eight hours a day.

Because channels are narrower, towboats that might typically push 30 barges tied together are now lucky to push 15 or 20. Each of them is loaded more lightly than normal, so they can stay afloat in shallower water.

Barges that would normally have 12 feet of goods are now down to 8 feet. The barges are so big that one inch of lost cargo space means you're losing 17 tons of shipped goods per barge.

The higher cost of moving commodities could translate into higher food prices. "There's not enough trucks in the world to handle all the traffic in barges," says Wilmsmeyer, who is also the president of the trade association Inland Rivers, Ports and Terminals.

People working along the Mississippi greet one another by saying, "You think the river's going to come up some?" It's everyone's hope. 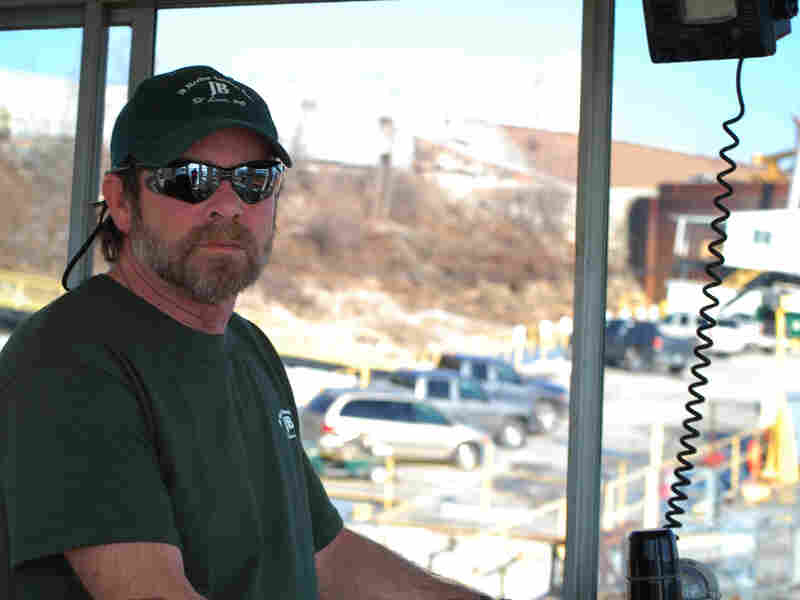 "We're at the mercy of Mother Nature," says Larry Rowe, captain of a JB Marine boat. People along the Mississippi are hoping for significant snowmelt to raise the water levels. Alan Greenblatt/NPR hide caption

Members of Congress along the affected stretch of the river have been lobbying the Obama administration to release more water from the Missouri River, which flows into the Mississippi just north of St. Louis. So far, they've had no luck.

Instead, people have to hope for significant snowmelt. But the drought that damaged crops in the Midwest last summer shows no signs of abating.

JB Marine has 110 employees. So far, George Foster hasn't laid anyone off. Across the river from his tilted office, Foster sees fully exposed, 18-foot channel dikes that are normally covered with water and wonders when enough barges are going to come through again to keep all of his people busy.

With the river so low, he can't lower his docks far enough to clean the bottoms of barges that do come into the area. Along the affected stretch of the Mississippi River, some 8,000 jobs are thought to be at risk.

"We're sitting here with four dry docks with nothing to do," Foster says. "I have to take a serious look here at personnel, but that's a tough decision."