Accessibility links
What Do You Pack For A Seven-Year Trip? Journalist Paul Salopek is setting out from Ethiopia on a 21,000-mile walking tour that will follow the migration path of the earliest humans. But the story, he says, is about where the world is headed, not where it's been. 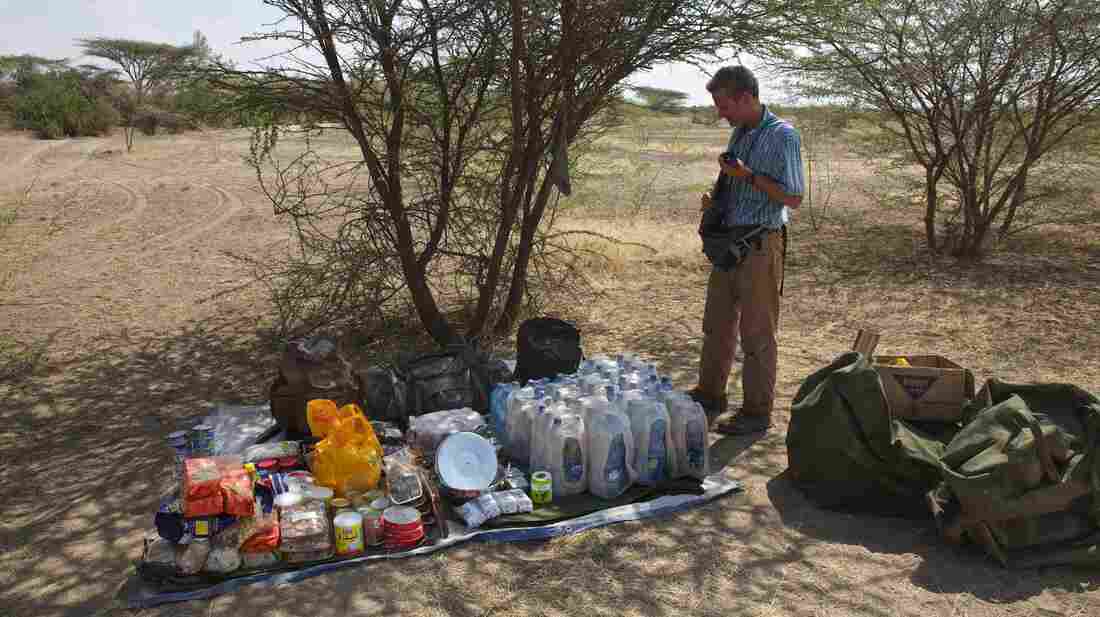 Journalist Paul Salopek, shown here with his supplies in Ethiopia, is setting out on a seven-year walk that will take him to the tip of South America. John Stanmeyer hide caption 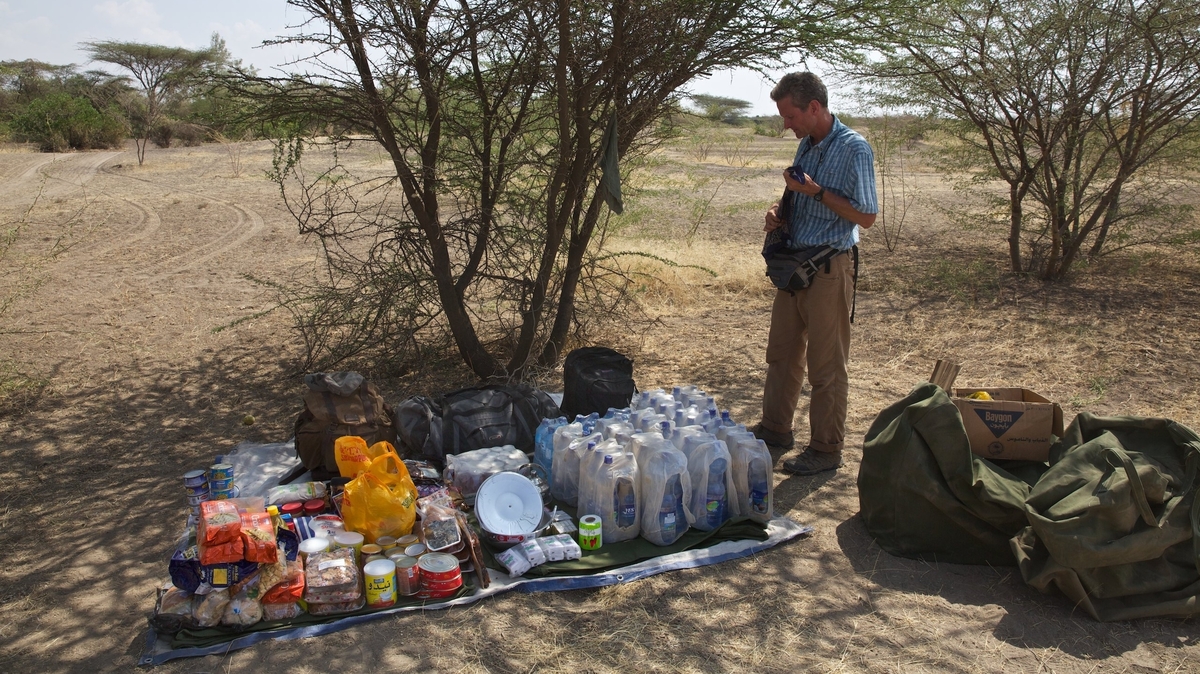 Journalist Paul Salopek, shown here with his supplies in Ethiopia, is setting out on a seven-year walk that will take him to the tip of South America.

Paul Salopek is already a well-traveled journalist — a two-time Pulitzer Prize winner who has spent most of the past two decades roaming across Africa, Asia, the Balkans and Latin America.

This, apparently, has not sated his wanderlust. So now he's in a dusty village in Ethiopia's Rift Valley, ready to launch a seven-year, 21,000-mile journey on foot that will take him from Africa, across the Middle East and through Asia, over to Alaska and down the Western edge of the Americas until he hits the southern tip of Chile.

"The short version is I'm interested in narrative, I'm interested in storytelling," Salopek, speaking by satellite phone, tells Morning Edition host Steve Inskeep. "After jetting around the world as a foreign correspondent, after flying into stories, after driving into them, helicoptering in, even, I thought about what it would be like to walk between stories. Not just to see the stories we were missing by flying over them, but to understand the connective tissue of all the major stories of our day." 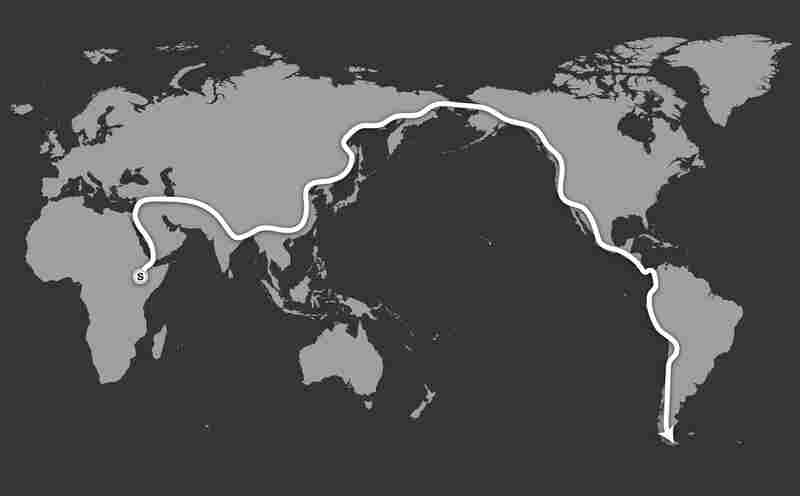 Salopek plans to follow this route on his seven-year journey, but says he may have to make revisions when he reaches turbulent areas. Courtesy of National Geographic hide caption 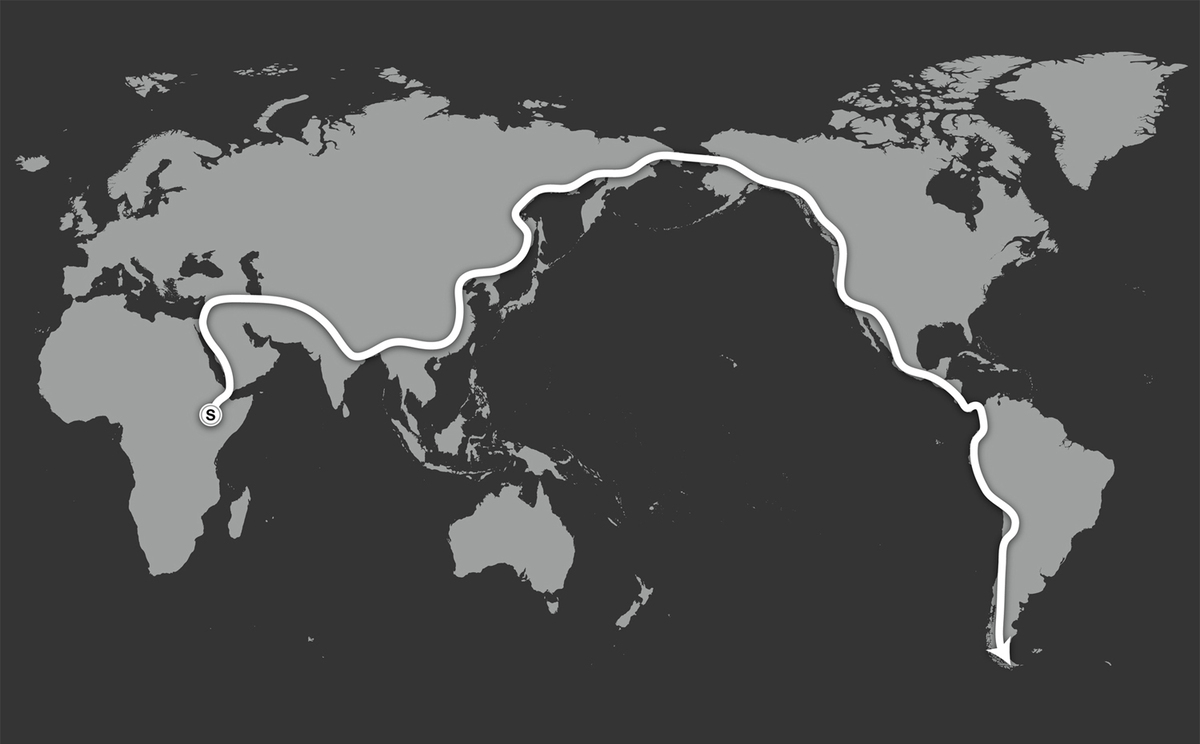 Salopek plans to follow this route on his seven-year journey, but says he may have to make revisions when he reaches turbulent areas.

Salopek said he chose his route based on the migration out of Africa by early humans. But, he said, it's more a journey about the future than the past.

"I don't want this to be misperceived as a journey about the past," he says. "I'm using the past as a road map. I'm using what scientists are telling us are the closest approximations of how we dispersed out of the mother continent, Africa, about 50,000 to 70,000 years ago."

But, he adds, "it's very much about the present day. It's about how we've changed the world, and how the world is being radically altered in our view by such things as the Internet. I'm starting out this walk with about 35 percent of the world wired. By the time I reach Patagonia in 2020, about 80 to 90 percent will be wired."

Salopek noted that he was among the rural Afar people in Ethiopia, and some of the men sport a dagger on their traditional belts — along with a cellphone.

Here are some of the interview highlights: 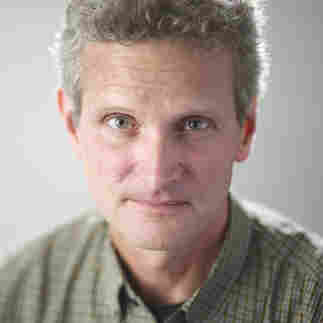 On obstacles he will face

"There will be challenges along the way. Often, they'll be challenges I'm not even thinking of. My personal experience in these regions is that, the first impulse, even in turbulent areas, is not one of hostility, it's one of generosity. That's not to say you can't get in a lot of trouble very fast; I have been in the past. But generally, the first reaction to people has been one of generosity."

On getting through turbulent parts of the Middle East

"The idea is not to turn it into a Herculean wilderness traverse. These areas are going to be challenging enough, so if I'm faced with the ... desert and an inhabited fringe to the right, my choice is going to be pretty obvious. I'll go where the people are, because I'll be living on local economies ... the idea is to be with people most of the time."

On what one packs for a seven-year trip

"The main thing that will not change though all the climates I will be walking through is basically how to get the story out. So I'll be taking an ultralight laptop, a satellite phone, a local cellphone and a camera and a digital recorder — so basically the kit any traveling writer or foreign correspondent would carry around the world. And I'm getting the lightest possible stuff I can buy. And the beauty is the technology is moving in my direction, getting smaller and smaller. And the cool part of the story is that it will be changing as I go. And the stuff I'm carrying now will seem ancient when I reach Tierra del Fuego in 2020."