Accessibility links
'Adventure Hour' Is A New Take On Old-Time Radio The Thrilling Adventure Hour is both an update and an homage to old radio dramas. Created eight years ago by college friends Ben Blacker and Ben Acker, the pseudo radio show features actors reading from scripts in front of a live nightclub audience. 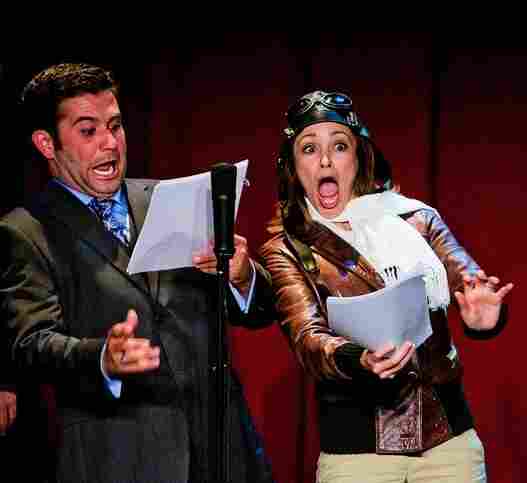 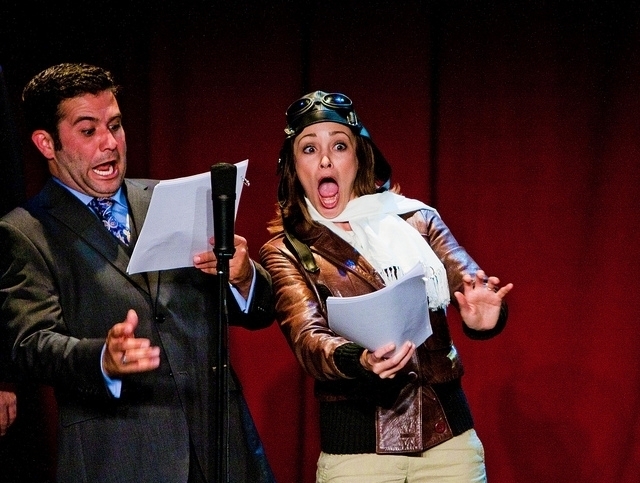 Mark Gagliardi and Autumn Reeser, as aviator Amelia Earhart, perform in The Thrilling Adventure Hour. Actors dress up and read scripts onstage in front of a live nightclub audience.

The creators of The Thrilling Adventure Hour proudly call it "fake radio." It's less an homage to old-time radio and more of a clever update. A live monthly performance at Largo, a 200-seat, scruffy-chic Hollywood nightclub is also available as a popular podcast through Nerdist.

One of the show's episodic heroes is a kind of mashup of Buck Rogers and the Lone Ranger, called Sparks Nevada, Marshal of Mars. He even has a snappy theme song, with such lyrics as: "You can have a lot of fun on the Red Planet, but a fella's gotta be careful, too. Danger's a-lurking over every space mesa and planetary plateau." Nevada is played by actor Marc Evan Jackson, and regular guest stars include the likes of Nathan Fillion (Firefly), James Urbaniak and musician/comedian Reggie Watts.

That's partly what keeps Mark Wallace coming to the show. He's seen The Thrilling Adventure Hour no fewer than 10 times. Wallace works for the space program, describing himself as an "interplanetary travel agent," and he's especially partial to the Sparks Nevada character because of, well, the Mars thing.

"They made a joke about, you know, hyper cattle — I started laughing really hard because we're looking for methane on Mars, which is what cows produce," Wallace giggled. "It's brilliant and hilarious."

The Thrilling Adventure Hour was created eight years ago by a pair of friends, Ben Blacker and Ben Acker. (Yes, for real.) They met standing in a line in college.

"Ben heard me say my name, and I said, 'That's a lot like my name!' and he said, 'Oh, you're a dope,' " the Bens say, overlapping each other in the recounting of the story.

The Bens, as they're known, studied film and scriptwriting at Syracuse University . During Acker's senior year, he was driving around listening to the radio when a drama came on. He had what's known in public radio as "a driveway moment." He listened, transfixed, resolving to find whoever was making these great radio dramas, and join them. 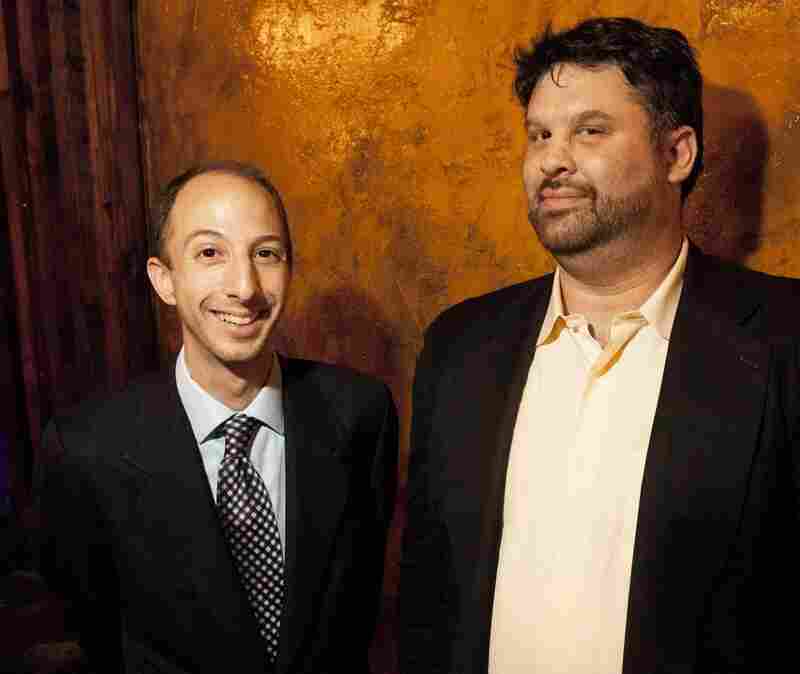 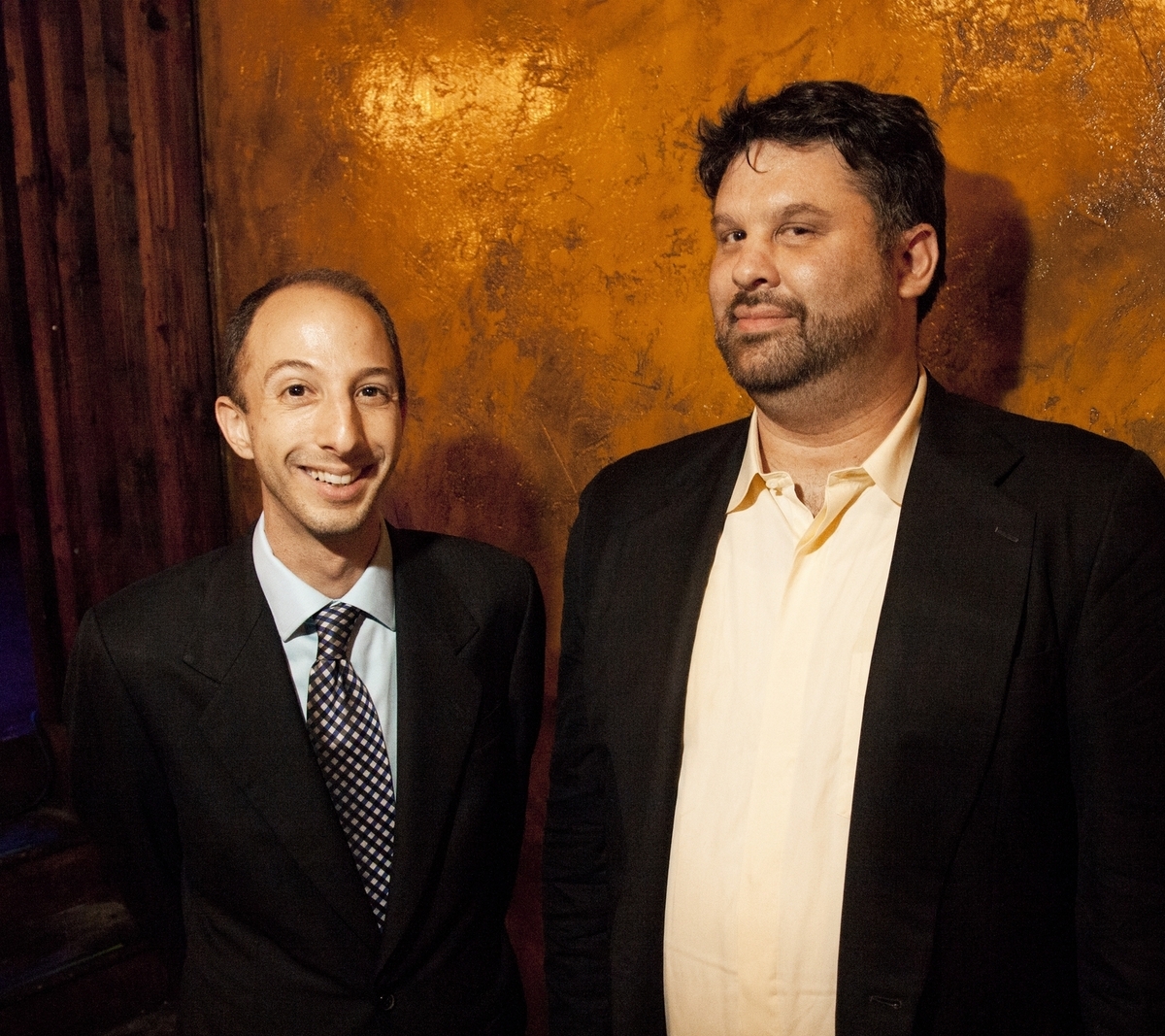 Ben Blacker (left) and Ben Acker are the co-creators of The Thrilling Adventure Hour. They first met while waiting in line at college.

Radio drama ended up not really being the end game. Acker and Blacker went to Hollywood to become TV writers. They initially wrote Sparks Nevada as a screenplay and got a bunch of their actor friends to do a table read. But they had so much fun they decided to keep it going as a pseudo radio show — first, live; and starting about five years ago, as a podcast too, with growing clout in a circle of Hollywood actors.

It's the Bens' winsome writing, but also the nostalgia factor and the ability to read off a script and not have to memorize lines that's lured Jorge Garcia of Lost into repeated guest-star stints. For this performance, he's playing a vampire who's "lost his thrall" in another regular serial called "Beyond Belief." It's about a pair of high-society mediums named Frank and Sadie Doyle.

"It's The Thin Man with ghosts," Blacker helpfully explains.

Garcia says one of the pleasures of the old-time radio aesthetic is wearing a suit onstage: It's fun to dress up to be on fake radio.

"I love the way it harkens back to a different time when they did shows," Garcia reflects. "I love having to put on the jackets and ties, like actors back then acted for radio." 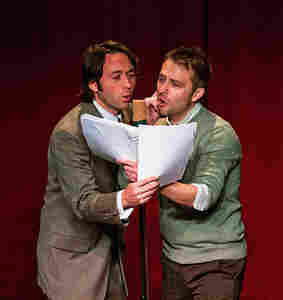 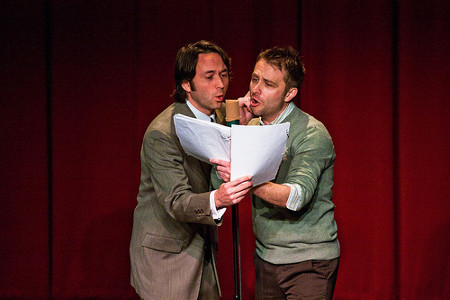 Another key point of authenticity is the total lack of swearing. That's a point of pride for writers Acker and Blacker. Still, Acker says he occasionally has to reassure a parent wondering if an episode is really family friendly.

"It is, but we're gonna kill a robot and a Martian, and there's gonna be vampire-on-vampire crime and drinking," Acker says. "So it's family friendly if you're OK with all that stuff."

Whatever the family, the show is friendly enough to make The Thrilling Adventure Hour almost as popular on iTunes as its competitor, A Prairie Home Companion.

Lake Wobegon, you're on notice. The Thrilling Adventure Hour recently branched out with live shows in Brooklyn and San Francisco. This year brings new platforms — a graphic novel, a behind-the-scenes Web series and a concert film.