Accessibility links
Juarez Priest Finds 'Hand Of God In The Midst Of Mayhem' The Mexican border city was the epicenter of the drug cartel wars, and it's still a violent place. Some 800 people were murdered last year, but that's down from 3,000 a couple years back. A priest who has lived through the worst of it says things are getting better. 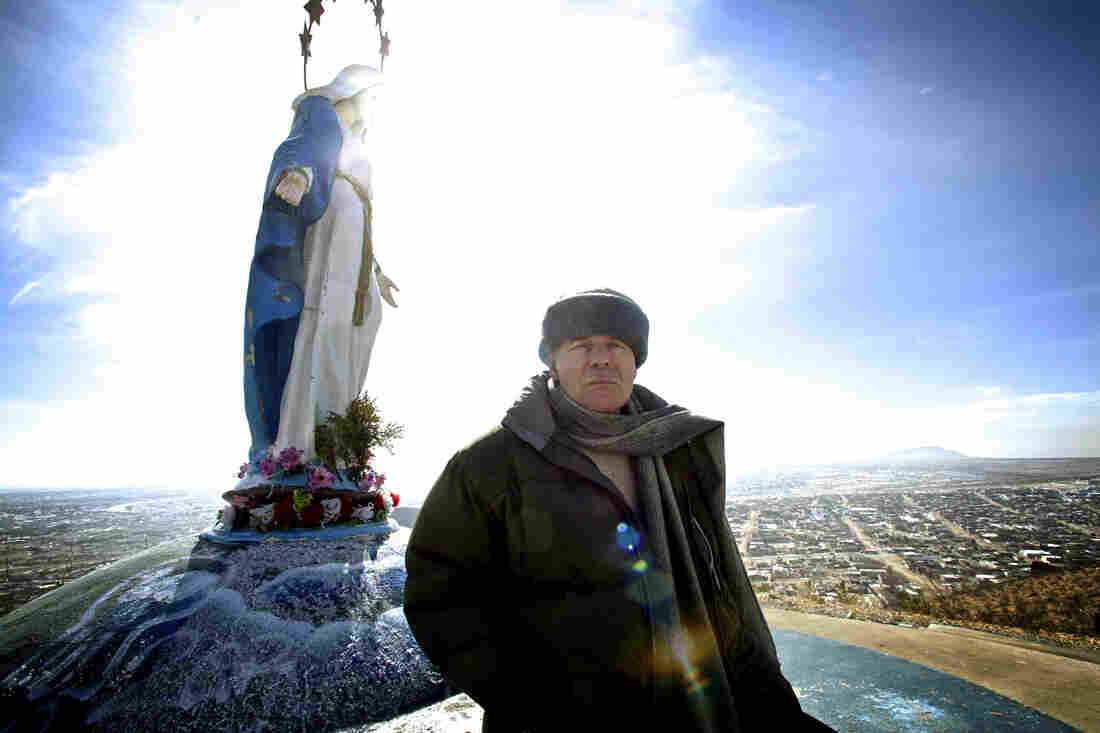 Father Kevin Mullins' parish, the Comunidad Catolica de Corpus Christi near Ciudad Juarez, Mexico, is located at the epicenter of the country's drug cartel war. After years of violence, murders are down and the city's shuttered shops and cafes are beginning to reopen. Christ Chavez/For NPR hide caption 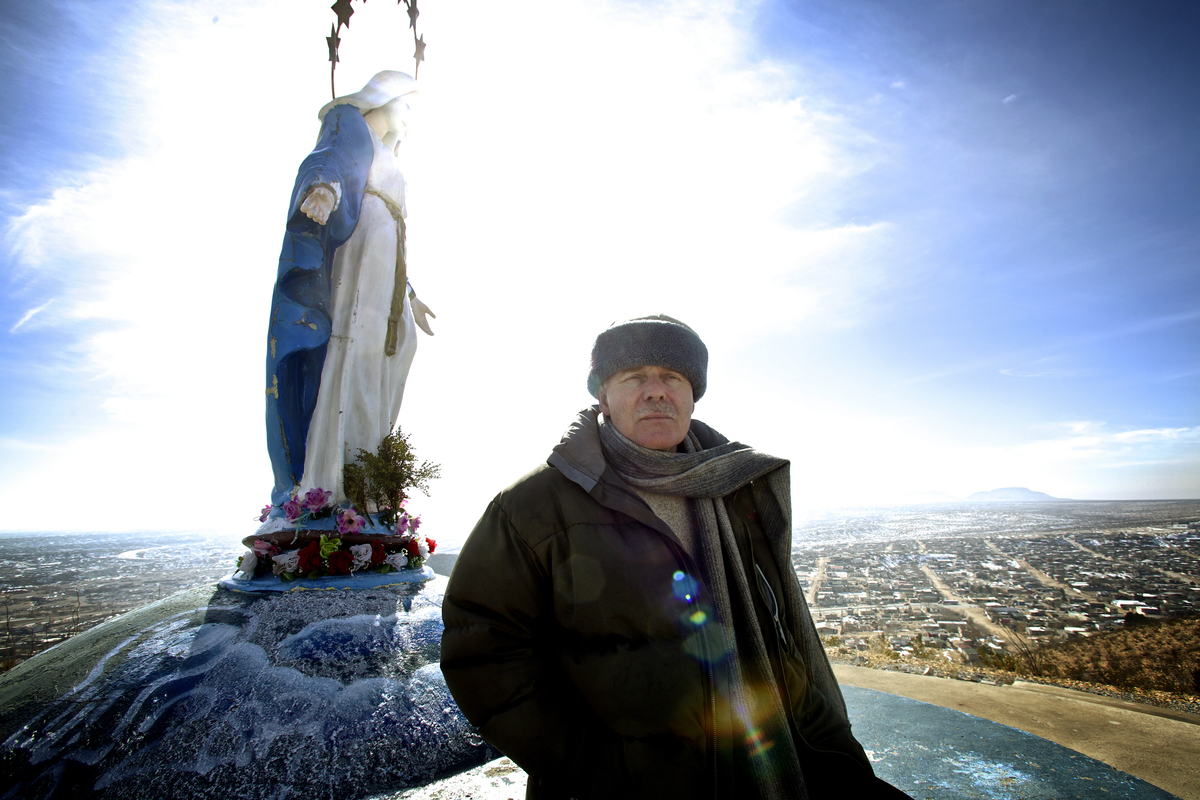 Father Kevin Mullins' parish, the Comunidad Catolica de Corpus Christi near Ciudad Juarez, Mexico, is located at the epicenter of the country's drug cartel war. After years of violence, murders are down and the city's shuttered shops and cafes are beginning to reopen.

Father Kevin Mullins steers his old Chevy pickup up a steep road to a hilltop dominated by a large statue of the virgin. She has a commanding view of this troubled corner of Christendom.

Here, the states of Texas, New Mexico and and Chihuahua, Mexico, intersect amid barren hills freckled with ocotillo plants and greasewood.

Getting out of the truck, the graying Catholic priest with the kind, ruddy face squints north. "From up here you can see across the I-10 there into El Paso. Also, you see the border fence down there. And then, further to the south, you have Ciudad Juarez."

Australian-born Mullins is a member of the Columban Fathers, who are committed to social justice. His Corpus Christi church is in Rancho Anapra, a hardscrabble barrio on the west side of Juarez that stares at El Paso across the sluggish Rio Grande.

It's been a tough four years in Ciudad Juarez, once the epicenter of Mexico's cartel war. Massacres, beheadings and disappearances became as commonplace as dust storms in the Chihuahua Desert. As the cartels took over and security vanished, packs of freelance thugs roamed the city, extorting at will. No one was spared.

"I heard on one occasion that a priest was threatened," Mullins says. "His parents would be shot, if the priest didn't pay up with the Sunday collection."

Giving last rites to bleeding bodies became as common as reciting the rosary. Father Mullins grew afraid, but he stayed. He says he wanted to be a witness to the suffering in his parish.

"On average, we'd have one or two murder funerals a week for ... at least three years," he says. "Mainly young people — males between the ages of 15 and 25."

New Life In The 'Murder City'

But Ciudad Juarez has gotten a reprieve. Violence is down sharply across the city: Children are playing outside again, shops and cafes have reopened, and some residents are moving back. 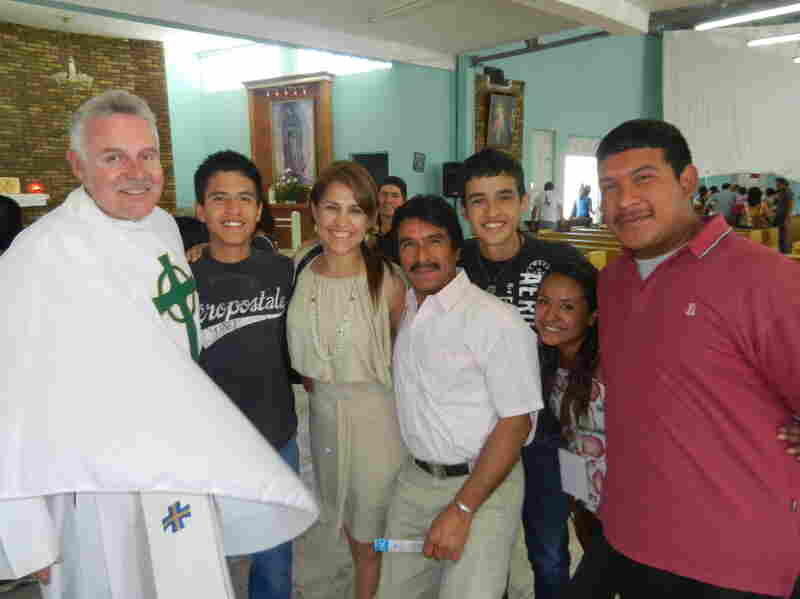 Although fearful of the violence in Juarez, Australian-born Mullins says he stayed to bear witness to the suffering in his parish. Courtesy of St. Columbans Mission Society hide caption 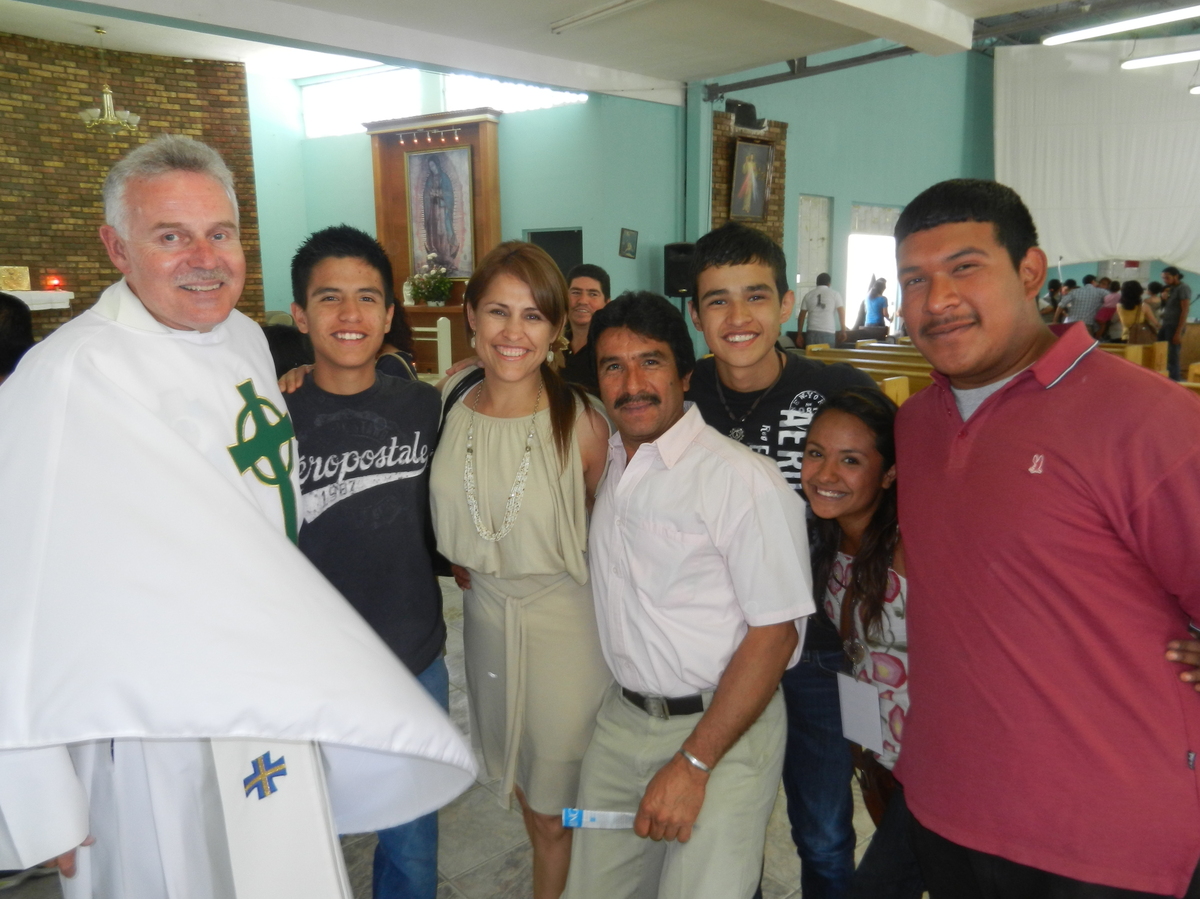 Although fearful of the violence in Juarez, Australian-born Mullins says he stayed to bear witness to the suffering in his parish.

Last year, there were fewer than 800 homicides. Still high, but that counts as progress in Juarez.

"I believe that we have seen a lessening of the violence," Mullins says. "We haven't buried anyone because of the drug-related violence in, I'd say, about four months."

The government takes credit for jailing the gang leaders and instituting social programs for at-risk youth. And while that's part of the explanation, the word on the street is that the turf war is winding down because one side won: the interloping Sinaloa cartel has all but defeated the local Juarez cartel.

Despite encouraging trends, the crime wave is by no means over. Juan Pablo Perez, a parishioner at Corpus Christi, pays extortion every month to keep his meat market and grocery store open on Anapra's main street.

Perez says a couple of years ago he paid $300 every month in protection money, collected by a 14-year-old girl who worked with the gangsters.

Today, he pays them just $120 each month — but Perez wouldn't characterize that as progress. "No way," he says sharply. "It's a burden."

A Refuge From The Violence

In a nearby neighborhood, Reyna Hernandez sits by her gas heater, bundled against the cold. Outside, the season's first snow carpets the muddy streets and rocky hillsides, turning them temporarily graceful.

Hernandez works as a cook for the priests at Corpus Christi. She, too, has witnessed the tribulations the parish has gone through.

"Lots of times, they lose their faith. Their faith weakens when they see so much death, so much blood," Hernandez says. "Other people who are in pain ask: Where is God? Why does he permit these things?"

The whitewashed church, located on a dirt street off the main boulevard, became a refuge from the madness of the cartel war. Juarez has been portrayed to the world as a place of darkness in which evil thrives, but Mullins sees another reality.

"I see the results of darkness. But I also see the goodness and the courage and the bravery of people," Mullins says. "I would see the hand of God in the midst of mayhem by people who were able to support each other, show great solidarity and kindness, love, hug [and] pray together."

Mexico Aims To Save Babies And Moms With Modern Midwifery

In the past decade, some Catholic churches in Mexico have been criticized for accepting narco-limosnas, or drug money tithes. One chapel in Central Mexico bears a plaque honoring its patron: a late drug lord who led the ruthless Zetas cartel.

Two years ago, Mullins says, a woman with ties to a Juarez drug syndicate offered to pay for a youth center and basketball court next to his church. The long-planned project would give young people something to do besides join a gang.

"We couldn't accept what turns out to be blood money for works in the parish," Mullins says. "We gratefully thanked her for her helpful offer but politely refused."

Mullins is pleased to report that, after he rejected the narco-tithe, other donors stepped forward; the spacious new youth center was completed last year.

With violence decreasing all over this shell-shocked city, he prays the youth of Rancho Anapra will have a better chance to reach adulthood.