Accessibility links
Superstorm Sandy Victims Resettle, Thanks To Small Town's Efforts A rural Connecticut town is now home to 13 families from Staten Island who lost everything after Superstorm Sandy — and more families are on the way. Locals and members of a megachurch helped build 20 mobile homes in New Milford, Conn., for the displaced families. 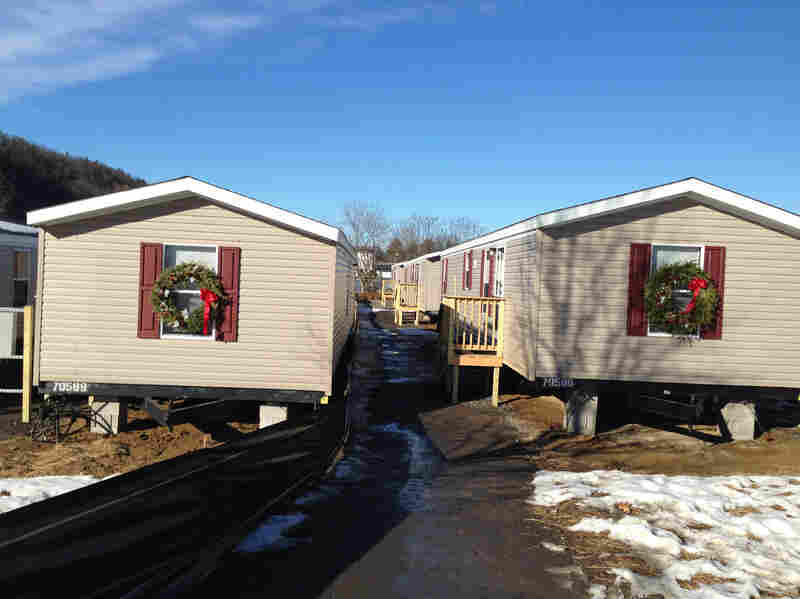 This brand-new neighborhood of mobile homes in New Milford, Conn., is home to 13 families from New York who relocated after Superstorm Sandy. They've agreed to move out after a year, and will have a chance to buy the mobile homes afterward. Neena Satija/WNPR hide caption 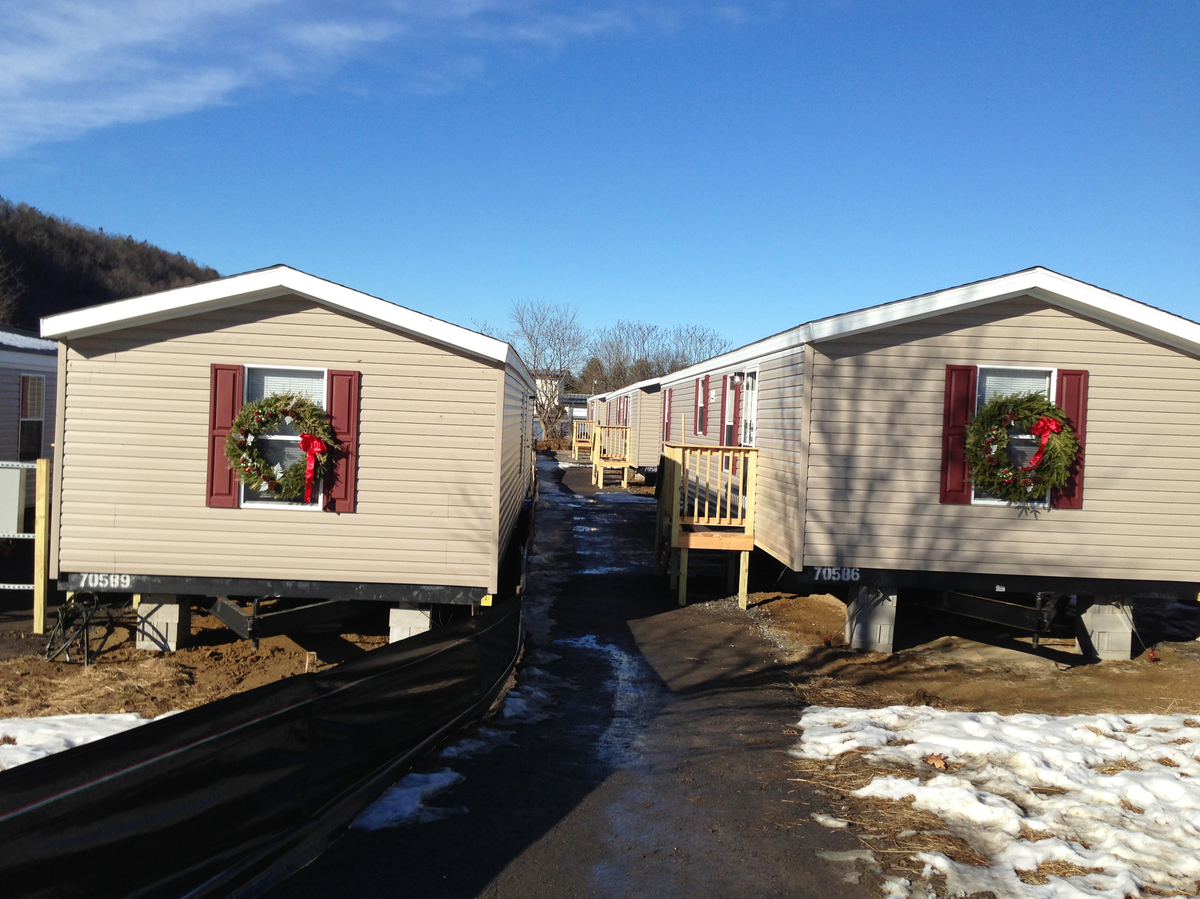 This brand-new neighborhood of mobile homes in New Milford, Conn., is home to 13 families from New York who relocated after Superstorm Sandy. They've agreed to move out after a year, and will have a chance to buy the mobile homes afterward.

Thousands of Superstorm Sandy victims are still displaced more than two months after the storm. So, some locals in Connecticut hatched a plan to relocate some of them to a brand-new neighborhood with homes of their own.

Deborah Rassi and her family from Staten Island, N.Y., have been in the small, rural town of New Milford, Conn., for three days.

She was happy to be unpacking at her brand-new mobile house, which came with bags of donated clothing.

"One might be laundry," she said as she sorted through the items. "OK. This is a man's shirt and, it looks like, a pair of pants."

John Hodge has been working on the Rassis' small home and 19 others like it for about two months.

"The whole idea came together in about 20 minutes," said Hodge, first selectman of New Fairfield, Conn., a small town near New Milford. "Actually making it happen is another whole story."

We're very lucky, because there are neighbors of ours who are still sleeping in their moldy houses and in their cars overnight. So we recognize that this is truly a blessing.

After Sandy, he helped funnel donations into New York and watched many families get shuttled from one evacuation center to the next. So he got together with a megachurch in New Milford, which donated the use of four acres of land, and a New York foundation, which raised funds. Hundreds more donated their time and money to put up a working neighborhood of 20 mobile homes, complete with wreaths on their doors, by Christmas. Hodge said he's never worked on anything like it.

About 50 families have applied for 20 available spots. The Rassis are among 13 families that have moved in so far.

When they relocated to their new neighborhood tucked into the hills, they were greeted with kitchen cupboards full of food and little bedrooms with fresh new linens. They can live here, rent free, for a year. After that, the land will go back to the church, and Hodge said the families will have a chance to buy the mobile homes.

"This is ... really moving up in the world, you know, to have a place to sit down and everything," said Robert Rassi, 67, Deborah's husband.

Picking Up The Pieces

The couple grew up in New York and have lived on Staten Island for more than 30 years. Their daughter Leila had just moved back in with them — and brought everything she owned. Then, the house filled from floor to ceiling with water during Sandy.

The Rassis are hoping for more money from FEMA, but at most, they'll get $30,000 — not even a tenth of what they lost, Leila said.

Starting over in the Connecticut town will not be easy. Unlike in Staten Island, nothing is within walking distance. The Rassis have one car, but they will probably need another one.

Still, some things are comfortingly familiar. Fellow New Yorkers live next door. And looking at the mountains in the distance, Deborah Rassi said she is flooded with memories of her old home. 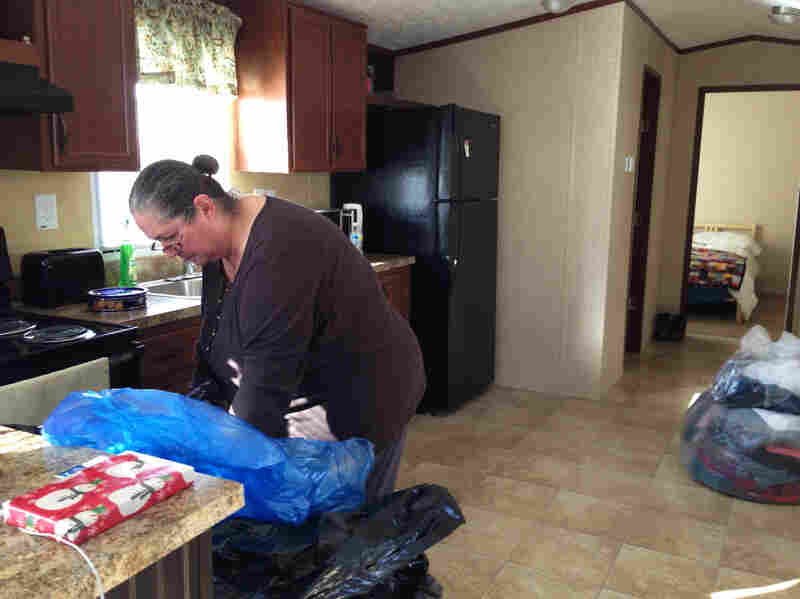 Deborah Rassi, 59, cleans her new kitchen. She's holding a bag of donated clothing, one of many that volunteers left in the new mobile home. Neena Satija/WNPR hide caption 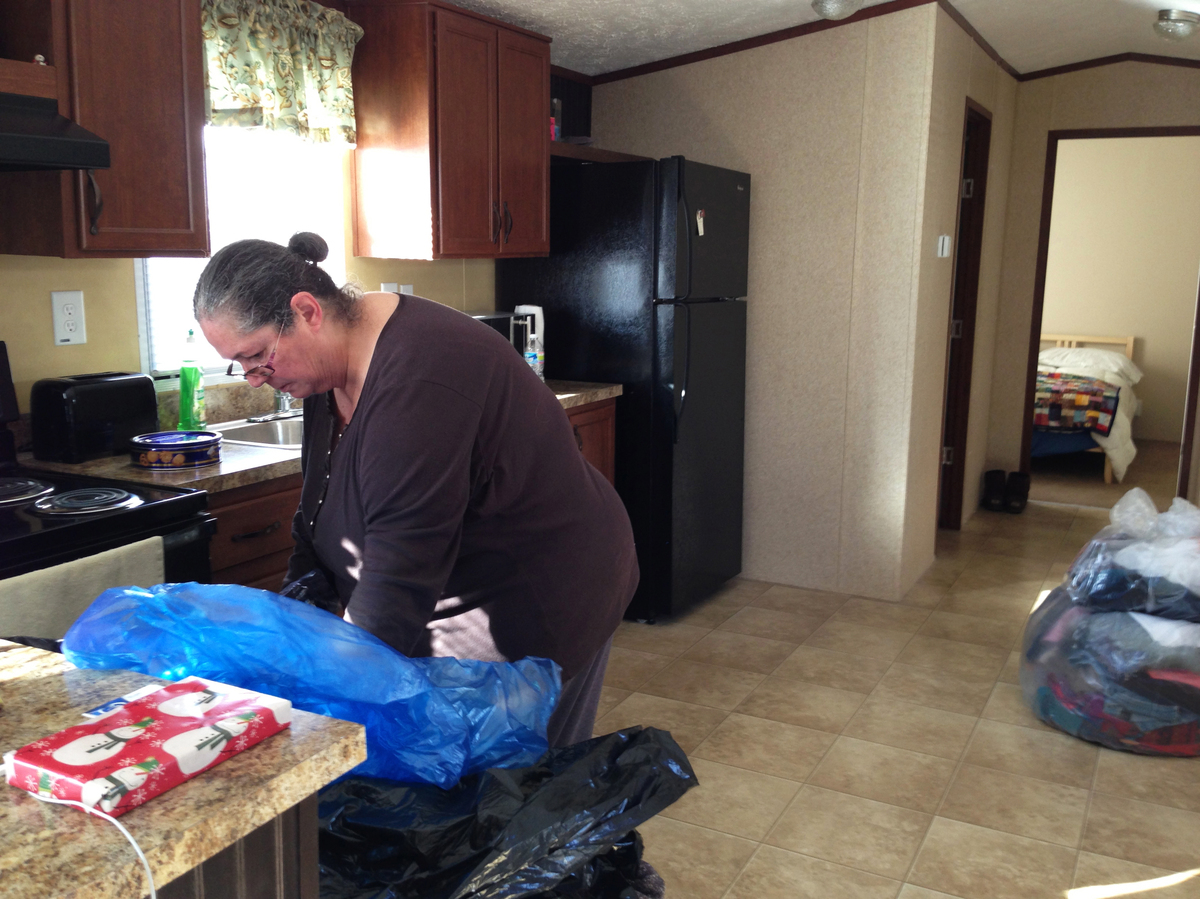 Deborah Rassi, 59, cleans her new kitchen. She's holding a bag of donated clothing, one of many that volunteers left in the new mobile home.

"I love nature," she says. "That's why being here, looking at the Berkshires, I'm very happy."

Deborah, who works in nursing administration, had just started a job search when the storm hit, and once she touches up her resume, she will start looking again in the New Milford area.

Leila is a researcher in Manhattan, a two-hour drive away, so she is going to look for housing closer to work. At the moment, she's just happy to have a place to breathe.

"We're very lucky, because there are neighbors of ours who are still sleeping in their moldy houses and in their cars overnight," she said. "So we recognize that this is truly a blessing."

The Rassis know this will not be a home forever. But with a place to get a good night's sleep, friendly neighbors and a closet of their own to store the little they managed to salvage, they can finally start to rebuild.