Accessibility links
Army Corps' Options Dwindle Along With Mississippi River The Army Corps of Engineers is working hard to deepen the Mississippi River's shipping channel. With water levels forecast to remain high enough only through January to float loaded barges, some say the only way to keep the river open next month will be to release water from the Missouri River. 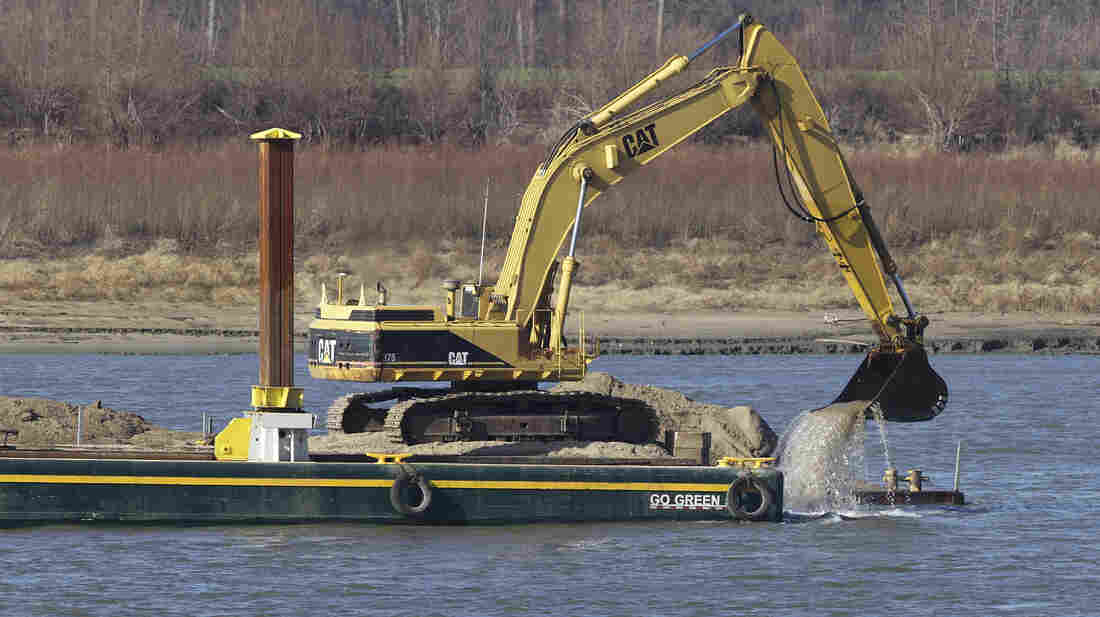 An excavator perched on a barge removes rocks from the Mississippi River in Thebes Ill. Seth Perlman/AP hide caption 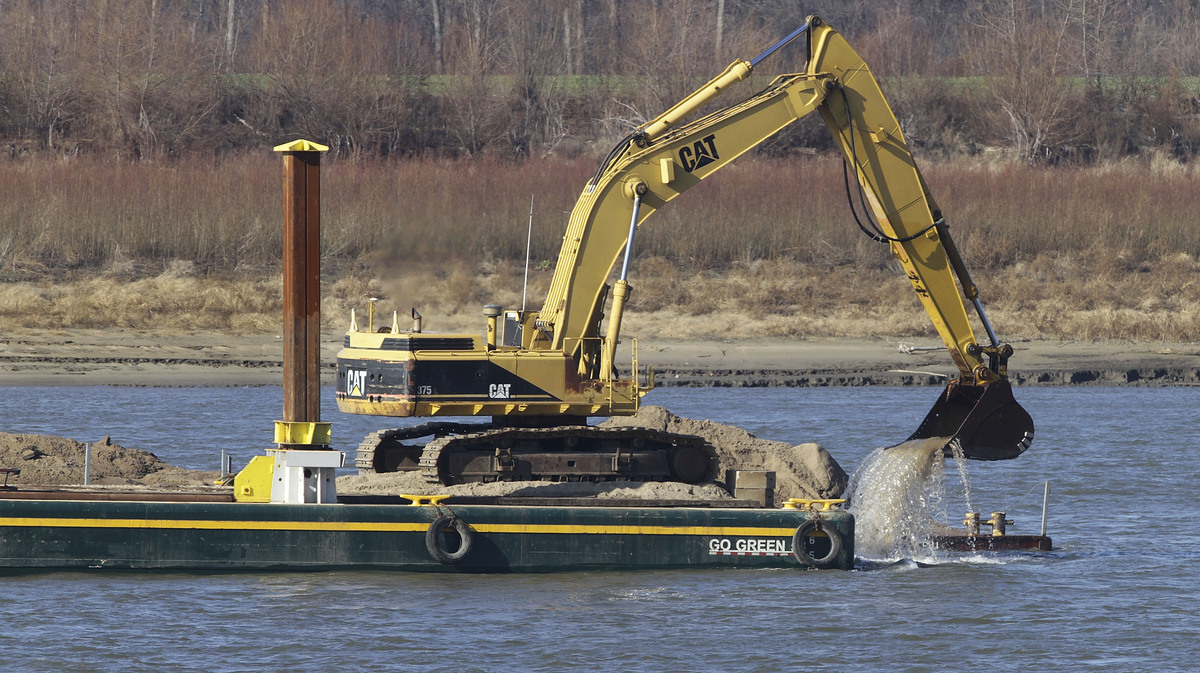 An excavator perched on a barge removes rocks from the Mississippi River in Thebes Ill.

Every day this month, the Army Corps of Engineers is working hard to deepen the Mississippi River's shipping channel in an effort to keep navigation open between St. Louis and Cairo, Ill.

Water levels are forecast to remain high enough through January to float loaded barges, but some say the only way to keep the river open next month will be to release water from the Missouri River.

The Corps is sort of caught in the cross hairs here — of a lot of competing interests in the Missouri.

On a recent afternoon, Maj. Gen. John Peabody zoomed across the Mississippi River on a survey boat near the tiny southern Illinois town of Thebes. It's the rockiest, most shallow stretch of the river, and it's now the pinch point in the Army Corps of Engineers' fight to keep navigation open on the Mississippi.

"What we're looking at here is pretty amazing ... it is solid rock outcrops," Peabody says. "It almost looks like lava flows that stopped as they were flowing toward the shoreline; it's a very narrow section of the river here."

About 30 yards away, a backhoe, perched on top of a stationary barge, swoops its bucket downward to break apart underwater rocks on the riverbed. Next to the backhoe are piles of rock — some small, some as big as a car — that have been scooped out of the water.

It's a weird sight on the river, but it's one that Peabody finds encouraging. They're removing these rocks, in some cases by blasting them to bits, in a desperate attempt to give this section of the river two additional feet of depth. That extra depth is just enough to keep navigation possible.

"We think through the month of January we're probably going to be in pretty good shape between the combination of the weather and the rock removal," he says.

There's good news and bad news here. The good news: There's been some rain in the Midwest, and historical trends say river levels typically bottom out in January before rising in February.

The bad news, however, is if that doesn't happen this year, the Corps is running out of options.

Water is already being released from Carlyle Lake in southern Illinois, but that's the last reservoir left for the Corps to tap.

Another option is the Missouri River, the longest river in the country, which runs through seven states, and is the Mississippi's biggest tributary. It's also off-limits to the Corps.

"The Corps is sort of caught in the crosshairs here — of a lot of competing interests in the Missouri," says John Thorson, a water law attorney who has long studied the Missouri River.

The Corps cannot legally release water from Missouri River reservoirs to benefit navigation on the Mississippi. Under a 1940s-era flood-control law, the Missouri is only managed for a handful of uses like recreation, water supplies, hydro power and Missouri River navigation.

The recent historical drought in the U.S. has scorched both the Mississippi and Missouri river basins. About 20 percent of the Missouri River's storage capacity for a 12-year flood has already been used up.

"It's going to be a dry year, and there might even be reductions in some of the authorized purposes on the Missouri, such as navigation," Thorson says. "So even within the basin itself, there's going to be impacts."

Thorson says President Obama might be able to use emergency powers to release Missouri River water, or Congress could pass some new legislation, but those moves would be extremely unpopular with Missouri River states.

At Thebes, Army Corps of Engineers Commanding General Thomas Bostick says the president is aware of the Mississippi River situation and all options are on the table — including the Missouri River water. But, he says, the Corps is already releasing more Missouri River water from its reservoirs than it normally would, just to meet water demands on that river.

"There's a lot of second- [and] third-order effects; there's a lot of interests, whether it's hydro power, ecosystems, the environment, water supply, navigation," Bostick says. "All of those purposes are important for us to look at and the impact of one over the other."

What the area, and the rest of the U.S., really needs is more rain. With regular rainfall, everything will go back to normal. If the drought persists, though, we'll be talking about river problems — and water fights — for a long, long time.