Accessibility links
The Kraken Is Real: Scientist Films First Footage Of A Giant Squid For thousands of years, sailors have told stories of giant squids. In myth and cinema, the kraken was the most terrible of sea monsters. Now, it's been captured — on a soon-to-be-seen video. 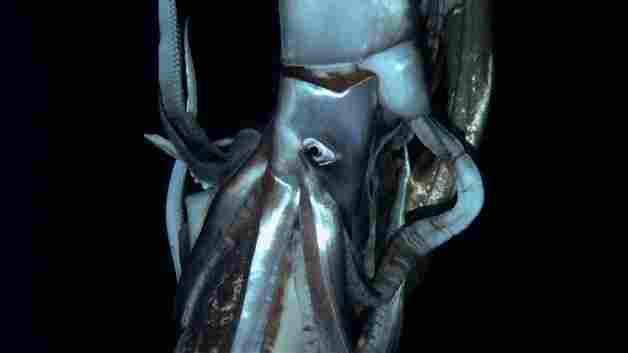 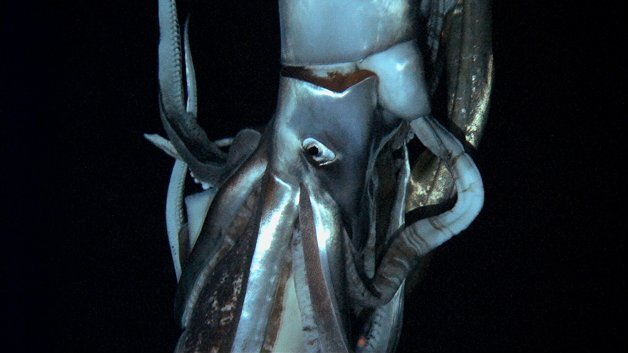 A giant squid stars in this still image taken from the footage Edie Widder shot. It's the first-ever video of these giant squids, and it'll debut in a Discovery Channel documentary airing in late January.

For thousands of years, sailors have told stories of giant squids. In myth and cinema, the kraken was the most terrible of sea monsters. Now, it's been captured — on a soon-to-be-seen video.

Even after decades of searching, giant squids had only been seen in still photographs. Finally, in last July, scientists filmed the first video of a live giant squid swimming some 2,000 feet below the surface of the Pacific Ocean.

Edie Widder is the ocean researcher who shot the footage, which is slated to be released in a Discovery Channel documentary later this month.

She told Jacki Lyden, host of weekends on All Things Considered, the elusive creature could have been as much as 30 feet long. The largest squid on record, she said, was 55 feet long.

How Widder stalked the giant squid

"I had been wanting for a long time to explore the ocean in a different way, because I've always been concerned with how much stuff we must be scaring away — the way we go down with noisy submersibles that have thrusters whirring and bright lights on them. Any animal with any sense is going to get away from that. So I wanted to develop a stealthy system. And besides having a stealthy camera, I wanted to not just put down bait the way normally people do to attract animals, because dead bait is just going to attract scavengers. And so I wanted to attract active predators, so I developed an optical lure that imitates a particular type of bio-luminescent display that I thought should be attractive to large predators."

"The reason we know giant squids exist is that they happen to float when they die. But we really [have] only explored 5 percent of the ocean, and I think we've explored that in the wrong way. I think we've scared a lot of animals away. So what about the stuff that doesn't float when it dies?" 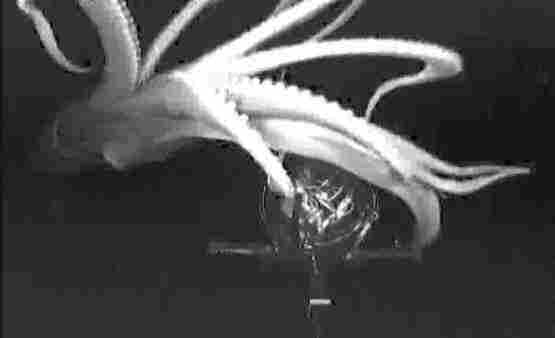 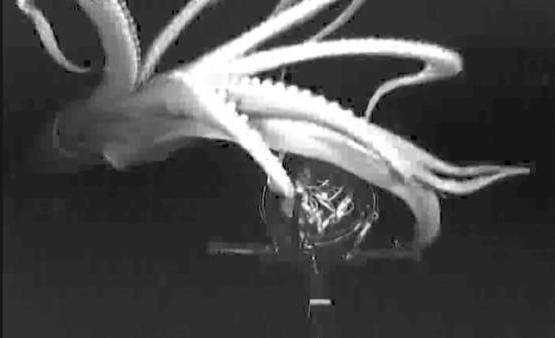 A giant squid is attracted to the "e-jellyfish," a bioluminescent lure invented by marine biologist Edie Widder.

On getting the money-shot of the camera-shy giant

"The footage I got was just amazing to see... . The first few times we saw it on camera was like it was doing a fan dance and just showing us little bits of itself. We'd see the arms kind of wave by the camera. ... But the most spectacular shot is when it came in on the attack ... it comes up over the sphere — which is the optical lure that's illuminating the bio-luminescent display — and attacks the camera itself."

On the squid's surprising appearance

"The color was utterly different than any of us expected. The one that had been brought to the surface and that there were pictures of was red, and a lot of deep-sea squid are red. But this was a spectacular silver and gold. It just looks like it was carved out of metal, it's just completely breathtaking and completely unexpected."

"The excitement was incredible. It's just amazing to be able to have a moment like that and realize you've done something people have been trying to do for decades. That's what got me into science in the first place — this opportunity to explore a new frontier. But I never, never imagined that I'd get an opportunity like this."