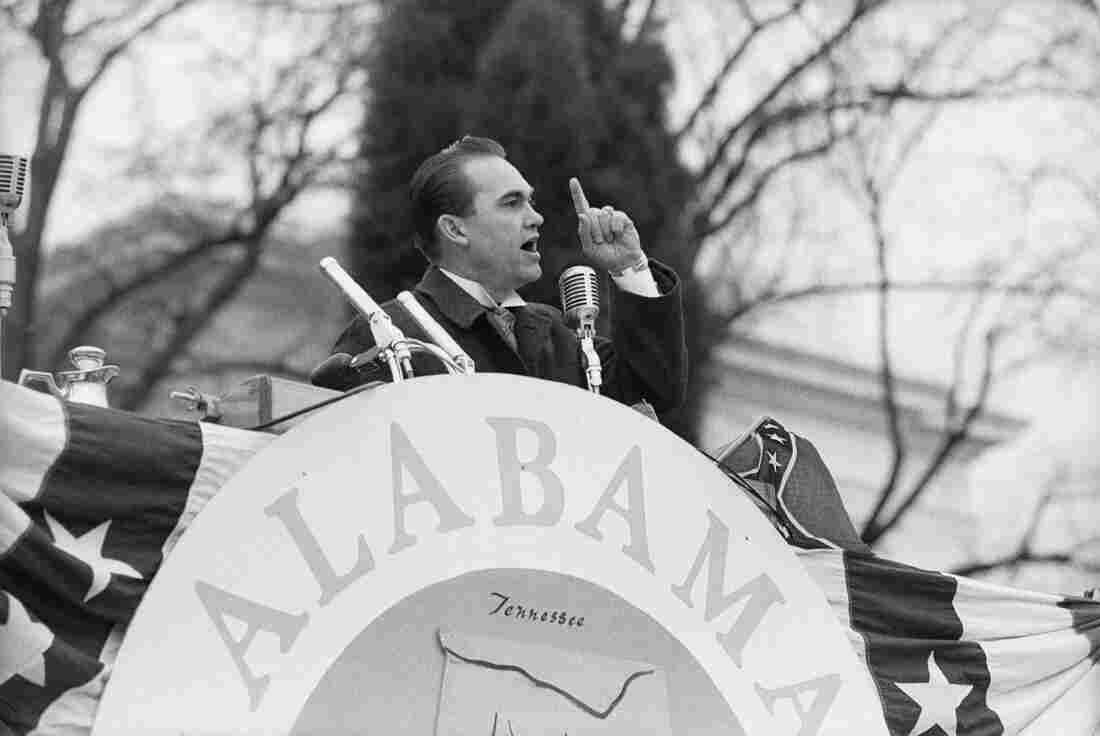 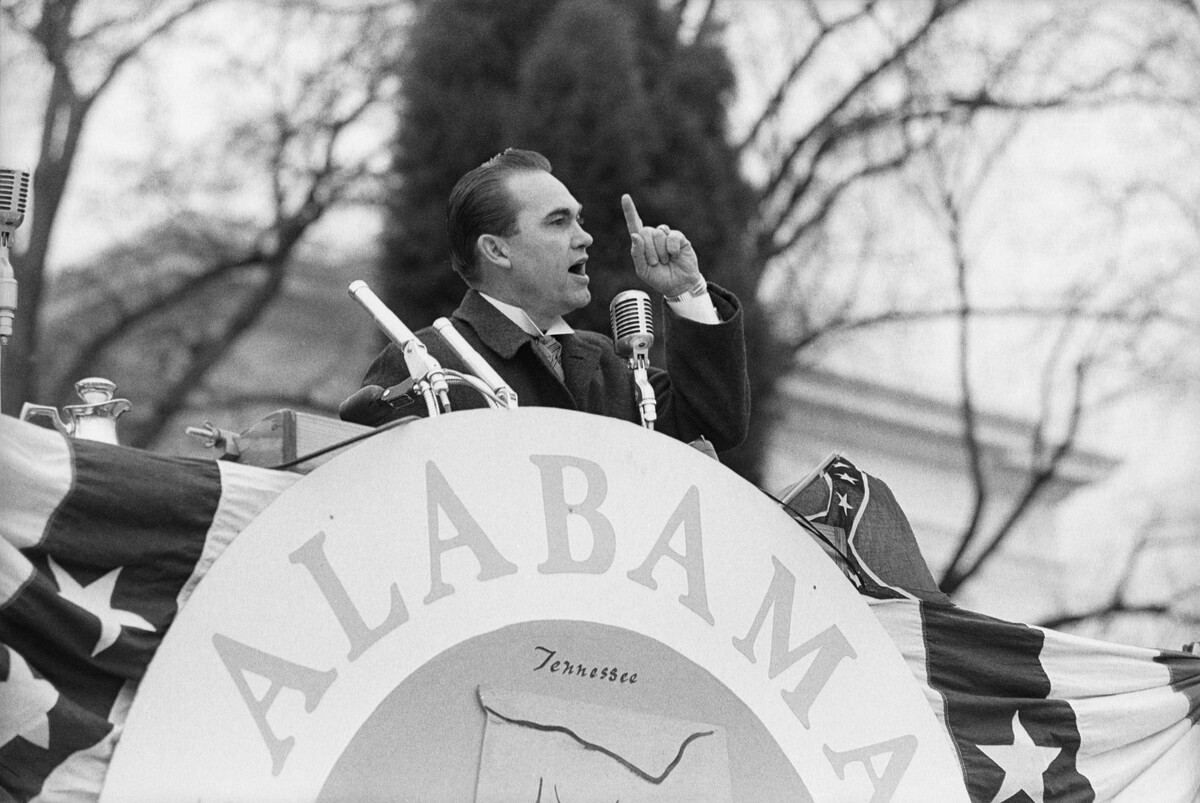 It was just a single line in a speech given 50 years ago today. But that one phrase, "segregation now, segregation tomorrow and segregation forever," is remembered as one of the most vehement rallying cries against racial equality in American history.

The year was 1963. Civil rights activists were fighting for equal access to schools and the voting booth, and the federal government was preparing to intervene in many Southern states.

And on Jan. 14, in Montgomery, Ala., newly elected Gov. George Wallace, a Democrat, stepped up to a podium to deliver his inaugural address.

Historian Dan Carter, who wrote The Politics of Rage, a biography of George Wallace, recalls how the streets of Montgomery were packed the day of Wallace's inauguration. His followers from across the state crowded around the platform, Carter says, "many of them wearing these white flowers, which were meant to symbolize their commitment to white supremacy."

James L. Poe Jr., a former student activist and then-president of the Montgomery chapter of the NAACP, says blacks were not invited to attend the event.

Listen to a portion of George Wallace's Jan. 14, 1963, inauguration speech

"It was open to the public, anyone in the public," he says. "But we were not the public."

A Fiery Speech, Heard Across The Nation

All of the major news networks covered Wallace's inaugural address on national television that day. And Wallace, Carter says, decided to "milk that for everything that he can."

The late Wayne Greenhaw, a newspaper reporter in Montgomery at the time, made a similar observation. "He was putting on a show. He marched back and forth, shook his fist," Greenhaw recalled shortly before his death in 2011. "He was promising that he would stand alone for the Southern cause and the cause of the white people."

Wallace's speech — and its delivery — was "vehement ... mean spirited ... hateful. It's like a rattlesnake was hissing it, almost," Greenhaw said.

"Let us send this message back to Washington, via the representatives who are here with us today," Wallace told the crowd. "From this day, we are standing up, and the heel of tyranny does not fit the neck of an upright man.

"Let us rise to the call of freedom-loving blood that is in us, and send our answer to the tyranny that clanks its chains upon the South," Wallace declared from the podium. "In the name of the greatest people that have ever trod this earth, I draw a line in the dust and toss the gauntlet before the feet of tyranny, and I say, segregation now, segregation tomorrow and segregation forever."

Wallace in the Schoolhouse Door

Poe, the former NAACP chapter president, says he and his colleagues were taken aback. "To hear the governor of a state get up and make the kind of comments that you would expect that someone in the back alley, with their sheets on and burning crosses would make — that was the thing that really caught us."

'Words Can Be Dangerous'

Reflecting on his response to the speech at the time, Rep. John Lewis, a Georgia Democrat, originally from Alabama, says he took Wallace's words personally. "My governor, this elected official, was saying in effect, you are not welcome, you are not welcome," Lewis says.

"Words can be very powerful. Words can be dangerous," Lewis says. "Gov. Wallace never pulled a trigger. He never fired a gun. But in his speech, he created the environment for others to pull the trigger, in the days, the weeks and months to come."

Indeed, violence quickly followed Wallace's inauguration, says Poe. "We began to feel the sting of the speech. People night-riding and burning crosses. The police beat down people and ran over them with horses, put tear gas on them."

And later that year, four girls were killed in the bombing of the 16th Street Baptist Church in Alabama.

"This was a very a difficult time in the American South," Lewis says.

"Segregation now, segregation forever" quickly became Wallace's symbol, Greenhaw recalled. "Before Wallace made that speech, the editorial page editor of the Montgomery Advertiser tried to get Wallace to take out that part" of the speech. "And Wallace said, 'Without that, it won't stand up.' 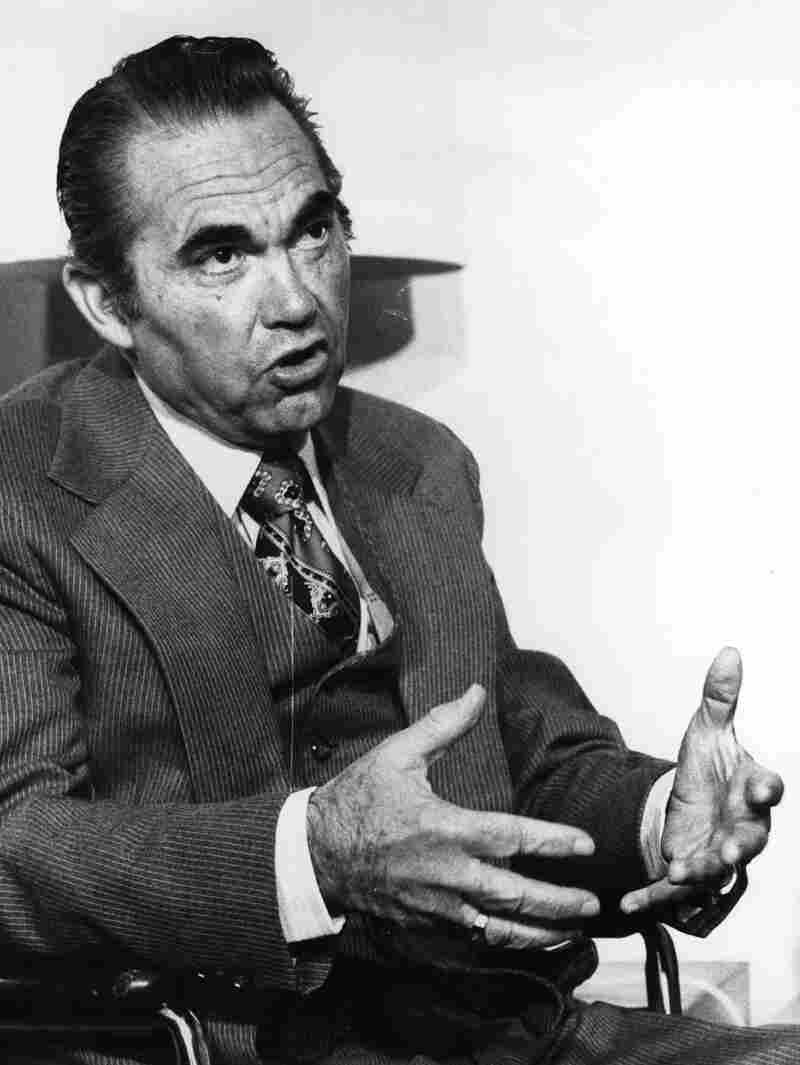 Wallace in 1975, three years after he was paralyzed in an assassination attempt. In his later years, Wallace reached out to civil rights activists and black churches to ask forgiveness. Peter Cade/Getty Images hide caption 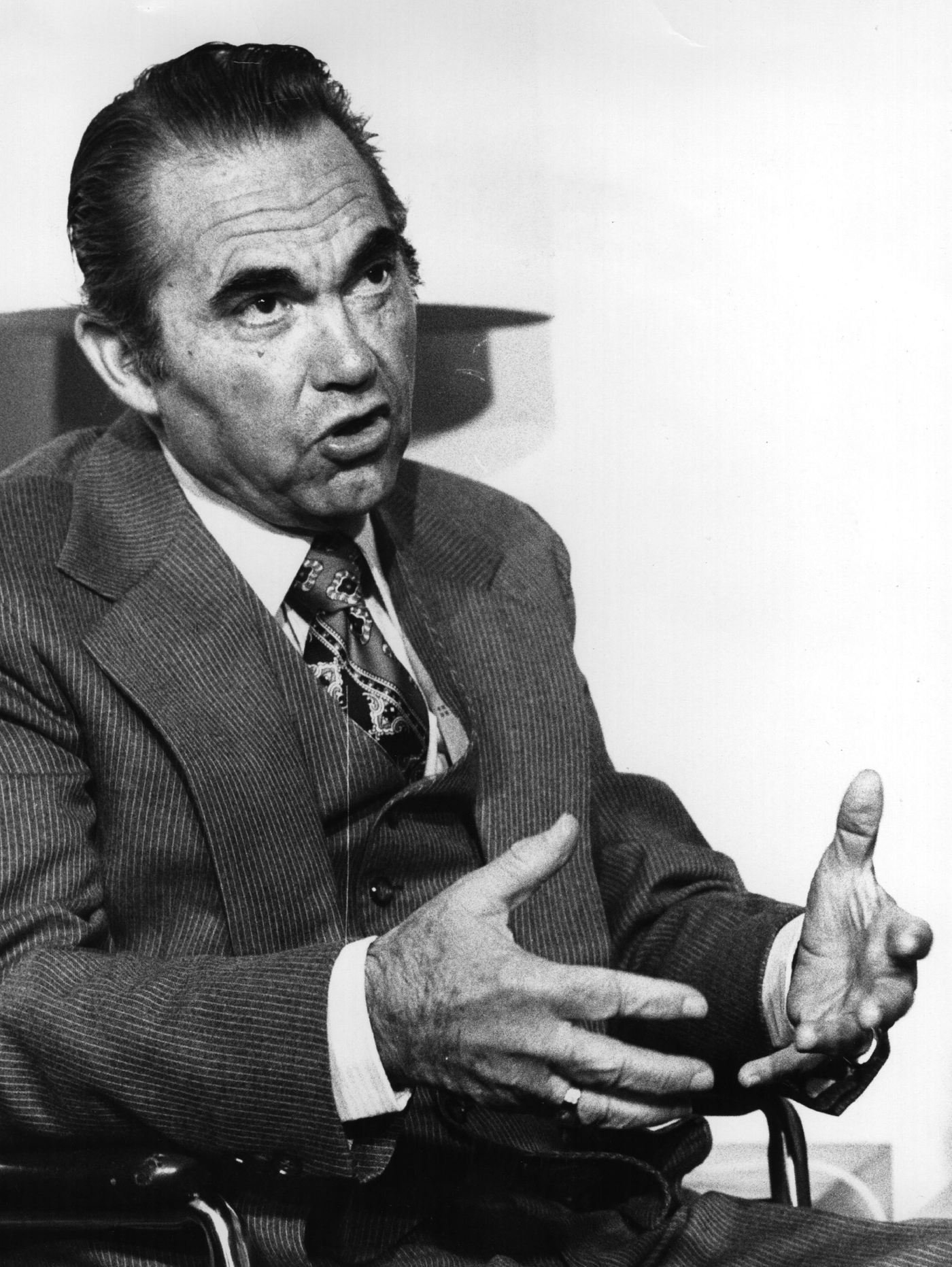 Wallace in 1975, three years after he was paralyzed in an assassination attempt. In his later years, Wallace reached out to civil rights activists and black churches to ask forgiveness.

"Much later in life, he probably wished he had taken it out," Greenhaw said.

'He Wanted People To Forgive Him'

Wallace himself became a victim of violence on May 15, 1972, while campaigning for president in Maryland. He was shot five times as he stepped out from behind a bulletproof podium. One of the bullets badly damaged his spinal cord, leaving him paralyzed.

"One has to wonder if, sitting in that wheelchair, maybe he had a chance to contemplate," Poe says of Wallace's years after the shooting.

Some years later, after Lewis had been elected to Congress, he heard from Wallace. "He said, 'John Lewis, will you come by and talk with me?'

"And I remember the occasion so well," Lewis says. "It was like someone confessing to their priest or to a minister. He wanted people to forgive him. He said to me, 'I never hated anybody; I never hated any black people.'

Poe was also able to reach the same conclusion. "Being the type of person I am, out of my heart and soul, I can forgive George Wallace. Yes. Heaven's sakes, I forgive him," Poe says. "But forget? No. Never."

Even today, Lewis says he often reflects on the governor's speech.

In his later years, Wallace reached out to civil rights activists and appeared in black churches to ask forgiveness. In his last election as governor of Alabama, in 1982, he won with more than 90 percent of the black vote. Wallace died in September 1998.

Produced for All Things Considered by Samara Freemark and Joe Richman of Radio Diaries with help from Ben Shapiro. Edited by Deborah George.