Accessibility links
The Great American Signature Fades Away Jack Lew's unreadable signature — which could appear on new U.S. currency if he becomes Treasury secretary — raises a question: In our age of electronic communication and digital authentication, do signatures even matter anymore? 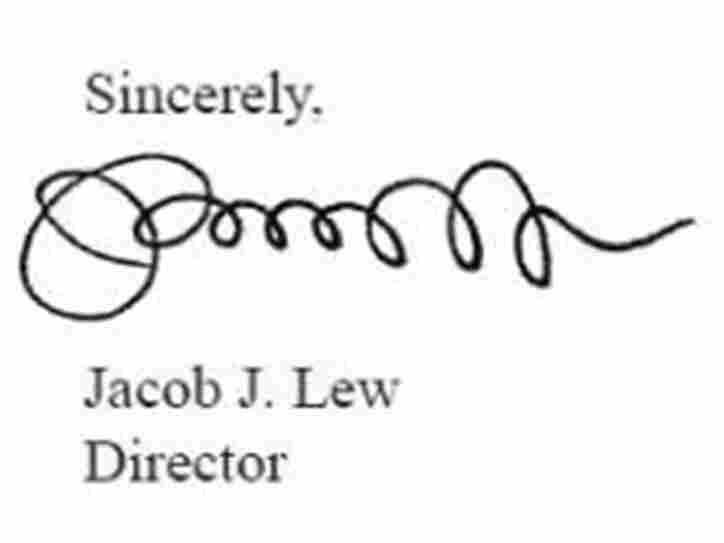 Jacob "Jack" Lew's particularly inscrutable signature caused a stir after he was nominated for Treasury secretary, because the title would put his signature on new U.S. currency. WhiteHouse.gov hide caption 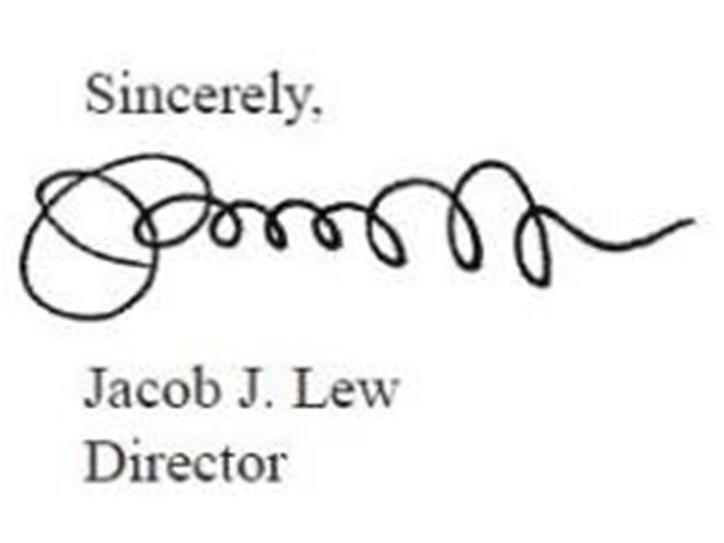 Jacob "Jack" Lew's particularly inscrutable signature caused a stir after he was nominated for Treasury secretary, because the title would put his signature on new U.S. currency. 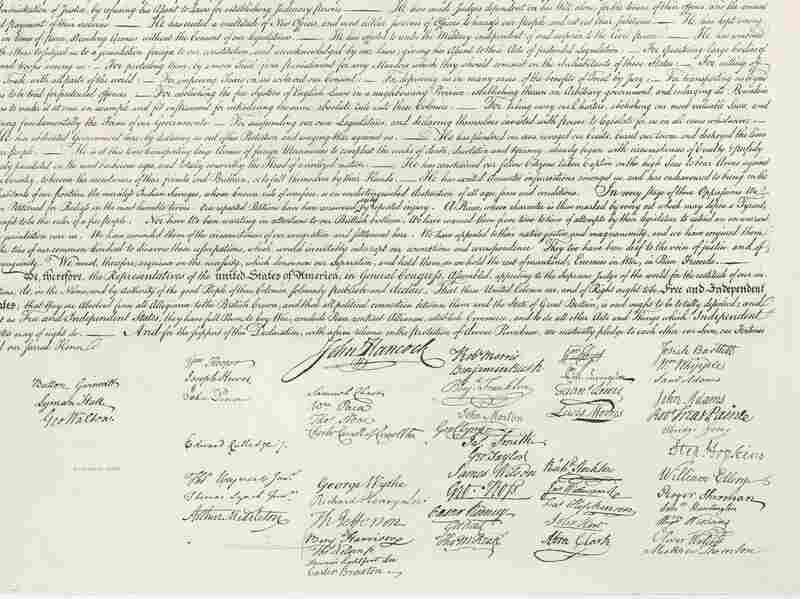 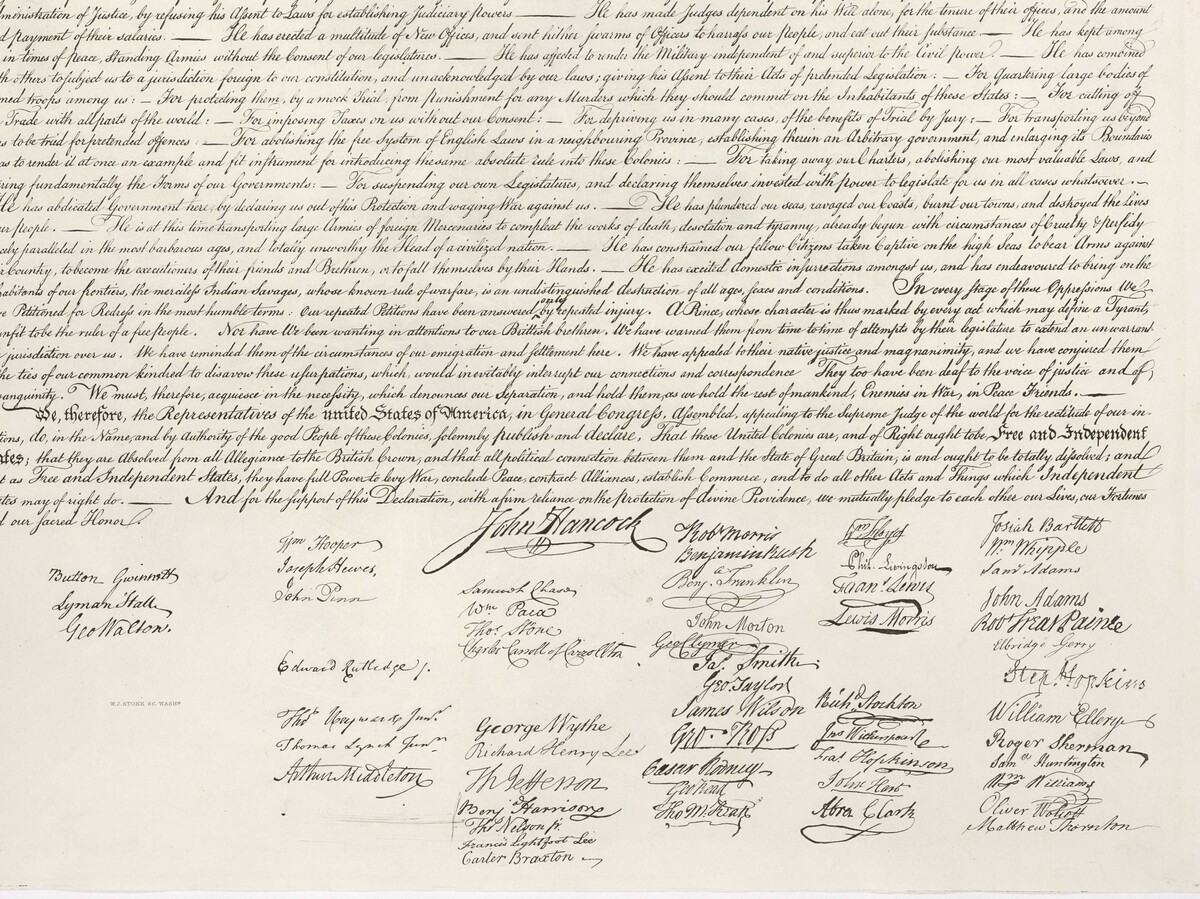 John Hancock's famously large signature is part of our visual heritage, but handwritten signatures are used less and less.

Much has been made recently of the loopy signature of Jack Lew, the Treasury secretary nominee whose name — if he is confirmed — will appear on new U.S. currency.

Lots of other people have screwy and inscrutable signatures that are every bit as illegible as Lew's. You can find a few of them on the Internet, including the hen scratchings of actor Johnny Depp, writer J.K. Rowling and singer Robbie Williams.

In fact, current Treasury Secretary Timothy Geithner had to change his signature, as it seems Lew might, to provide something legible enough to appear on dollar bills.

Stare at the squiggly curlicues long enough, though, and you start to wonder, what good is a signature really? And, especially in this digitally driven day and age, are signatures effective — or even necessary — anymore?

Stephen Mason, author of Electronic Signatures in Law, writes that "the function a signature performs remains as valid in the electronic age as when the use of an impression of a seal was considered to be the best means of authentication before the advent of widespread literacy."

But critics, such as Chris Hawkins, founder of SignNow — a company that focuses on digital authentication — believe that the Age of the Handwritten Signature may have run its cursive course. "The signature has traditionally been a scribble on a page to indicate you agree," says Hawkins. But that scribble "is nearly useless for identifying a person or proving something later."

Nowadays, Hawkins says, "We already don't need to sign anything on paper. I signed my marriage license electronically — on an iPad — and my company does electronic mortgage notarizations every day. Our most emotional life events are already electronic."

Still, Hawkins admits, "people do have a deeper emotional attachment to a signature than an 'I Agree' button."

But the question comes up: As we wrap ourselves more and more in the digital life, what will happen to the once-essential signature?

For several centuries, a personal, handwritten signoff has been an integral aspect of commercial, legal and social intercourse.

But before widespread literacy in Western civilization, writes Stephen Mason, "there was no value placed on a personal signature." Documents were often ratified with a cross, symbolizing a Christian oath of truthfulness.

Sometimes various objects were used as symbols of authenticity — especially when property was being bought or sold. In 1147, for instance, a pair of British brothers gave a gift to a priory and offered locks of hair from their heads as proof of their gift.

By the 14th century, Mason writes, many people were using seals and sealing wax to signify the conveyance of property. Members of royal families and eventually upper-crusty folks began signing their names on important documents.

During the Renaissance, writes Chris Hawkins in his book, A History of Signatures: From Cave Paintings to Robo-Signings, artists signed their works. A signature became known as part of a piece of art — sometimes with an artistic flourish or ornate underscore.

In the 18th century, Mason writes, cases concerning valid signatures started cropping up in British courtrooms. The practice crossed the sea to the New World, where the core documents of the American experiment were signed by Founders and Framers. The distinct signatures of Thomas Jefferson, Benjamin Franklin, John Hancock and others are part of our visual heritage.

And by the 20th century, Americans were routinely signing their names — in their particular hands — on all essential legal documents, checks, credit card payments and other binding agreements.

In recent years, however, as computers and keyboards have become more prevalent, the art — and the necessity — of penning one's name has gone out of style. The opposable thumb is used more for clicking a button than gripping a pen.

And no one seems to care anymore if our signature is legible or consistent or even our signature. We might as well all be a doctor dashing off an unreadable prescription.

The once-sacrosanct signature has become in our time an object of ridicule (cf Jack Lew above). At the prank site Zug, you can see the zany steps that writer John Hargrave takes to point out the absurdity of providing a signature these days. As part of his experiment, Hargrave signed credit card receipts with, among other things, artistic expressions, boxy grids, an X, stick figures, hieroglyphics and other people's names (such as Mariah Carey, Beethoven and Zeus). He said all his signings were accepted.

Credit card signatures "are designed to make you feel safe," Hargrave observes. But ultimately they are "useless."

So today we print our names. We sign online petitions with typed-in signatures. We offer voice authorization for two-year contracts read over the telephone. President Obama even signs key legislation — such as the fiscal cliff deal — with an autopen.

We no longer just rely on traditional signatures to work as assurances any more. Whole industries are springing up around alternatives. More and more we use personal identification numbers, or PINS, as methods of authentication. Verification technology is able to recognize us by our voices, our eyes, our fingerprints, our DNA and other means.

There are cautious adopters. To some people, learning to write your name in script is still an essential part of growing up. Karen Grossman of North Carolina, who blogs as Mom in the Muddle, says, "It's important for children — who have technology at their fingertips, who swipe from screen to screen, and who use their thumbs to push game buttons — to know how to sign their name, in some fashion."

Handwritten signatures, Grossman says, "are unique to us. Is the other option to have them typed? That doesn't feel safe or personal to me."

But many people are just not taking the signature seriously anymore. When nominating Jack Lew on Jan. 11, President Obama said (to laughter), "I had never noticed Jack's signature, and when this was highlighted yesterday in the press, I considered rescinding my offer to appoint him. Jack assures me that he is going to work to make at least one letter legible — in order not to debase our currency should he be confirmed as secretary of the Treasury."

At SignNow, Chris Hawkins is preparing for a future without signatures. "Technology adoption is easier when it follows people's existing mental models," he says, "which is why we try to improve, not reinvent, the signature. For example, our online notary product contains the traditional looking signature as well as multifactor identification and recorded video so we can prove the transaction."

So, will the centuries-old handwritten signature eventually disappear from everyday life? "Likely," says Hawkins. "But probably not until after a generational shift."

Children born in 2013, Hawkins adds, "will probably not share our generation's emotional attachment to a signature."