Accessibility links
6 Months Of Combat, And No Victor In Syria's Biggest City The northern city of Aleppo is split along a front line that's been stagnant recently. The rebels believe they will eventually take the city, but there's no end in sight. 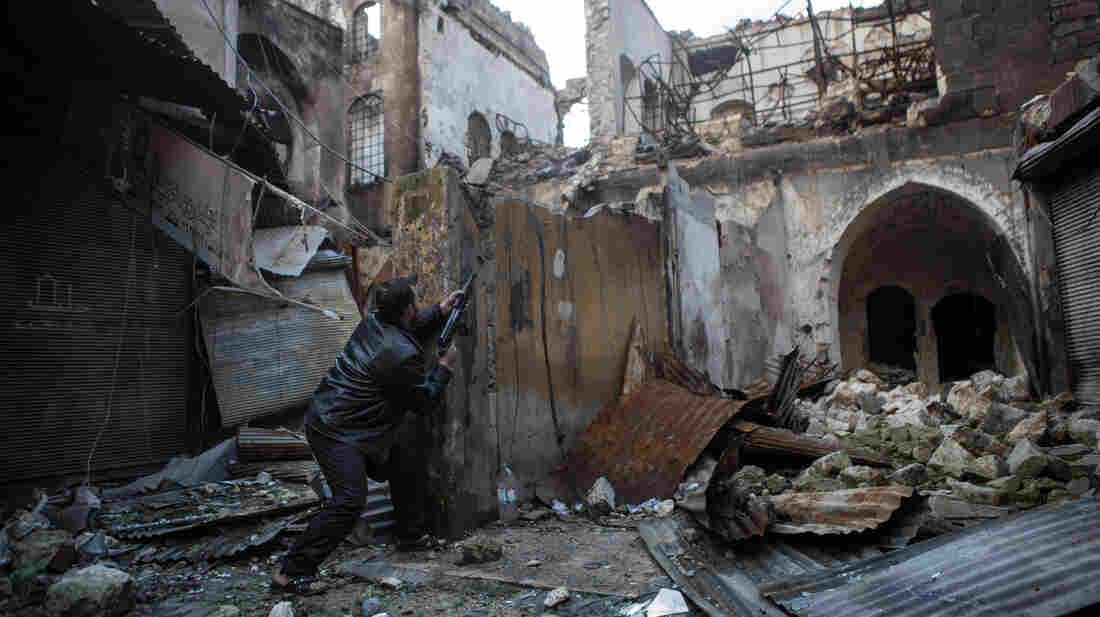 A rebel fighter fires toward Syrian government forces in the Bab al-Nasr district of Aleppo's Old City, earlier this month. The city has been a major battleground for the past six months. Olivier Voisin/AFP/Getty Images hide caption 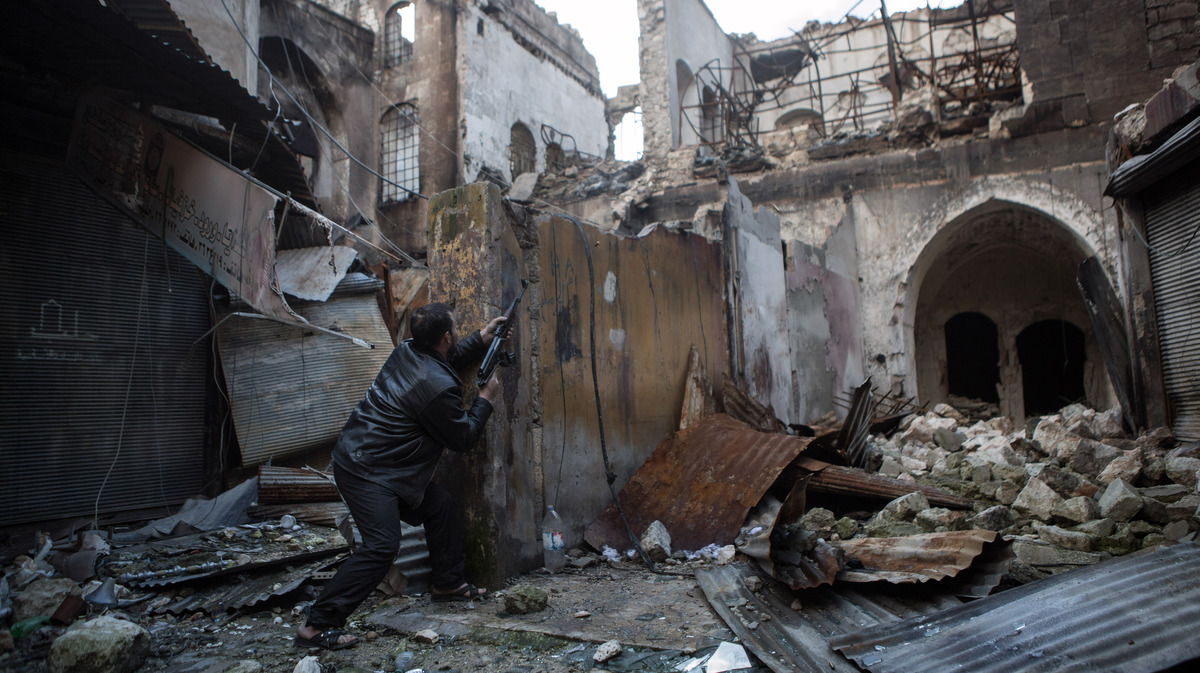 A rebel fighter fires toward Syrian government forces in the Bab al-Nasr district of Aleppo's Old City, earlier this month. The city has been a major battleground for the past six months.

Some six months after Syria's rebels tried to storm the country's largest city, they can claim the eastern part of Aleppo and perhaps 60 percent overall. In the west, the government army has the remaining 40 percent of the city.

The line dividing these two areas is supposedly the front line in Aleppo's war. But lately the front has gone cold, as people here say in Arabic.

You can still hear shots. But peering through a tiny little hole in a stone wall separating the two sides, this particular part of government-held Aleppo looks like a no man's land. There's a lot of trash, abandoned buildings, a mosque that looks like it's been abandoned.

The shots are from a government sniper, posted on top of one of those abandoned buildings. Although there's not much fighting here anymore, government soldiers sometimes try to pick off rebel fighters or civilians who cross from one side to another.

Marwa just crossed the front line. She and her sister sometimes make this perilous crossing twice a day. One day, a sniper almost killed her sister.

When asked whether she feels like she has a dual personality, she replies, yes, this is the reality.

Combatants Close Enough To Talk To Each Other

A rebel fighter stationed here says the two sides are so close they talk to each other at night, yelling across the front line. They even know each other's names, he says.

In recent months, rebels have realized that fighting for inches along these front lines is no way to win a war. So while a small number of fighters hold the front, the rest have turned their attention to government air bases that ring the city.

Rebels believe if they can cut off the government's ability to resupply its troops, Aleppo will fall.

Rebels have surrounded Mennagh airport on the outskirts of Aleppo, one of the three remaining key air bases in the area.

Rebels have been getting closer and closer to the base in recent weeks, says a fighter at a ruined house near the airport. But still, there are problems. He says his unit actually had to buy anti-aircraft weapons from another rebel unit.

And he says he has no idea if rebels who recently captured another major air base near here will come and help, or just keep the weapons they seized for themselves and fight elsewhere.

The Syrian army, meanwhile, has to contend with deserting soldiers.

One soldier, who had been at the Mennagh airport until he deserted a few days ago, says the government army fed him only once a day. He says that he waved a white flag at the rebels and made his escape at the first chance he got.

The government army also is struggling against better trained and better equipped Islamist fighters, some of them from outside Syria, who are now leading the battles at these government bases.

Of course, many questions remain. For instance, if rebels do take Aleppo, then what? They say they'll join other rebels who are already fighting to take Syria's capital, Damascus. But they face a tough battle there. And taking Aleppo could be a long way off.

As one Syrian civilian leader in the city said: If we use logic, it could happen in three months. If we don't, it could be years.