In China's capital, they're calling it the "airpocalypse," with air pollution that's literally off the charts. The air has been classified as hazardous to human health for a fifth consecutive day, at its worst hitting pollution levels 25 times that considered safe in the U.S. The entire city is blanketed in a thick grey smog that smells of coal and stings the eyes, leading to official warnings to stay inside.

Environmentalists say it's the worst pollution since monitoring began last year, while many others believe the levels are unprecedented in Beijing's history. The smog has affected more than 30 cities in China, leading even the official mouthpiece, the People's Daily, to ask plaintively: "How can we get out of this suffocating siege of pollution?"

The conditions are expected to linger for two more days.

China is choking on its own breakneck development, with thousands of new cars taking to the road every day. This year, the pollution has been exacerbated by weather patterns, combined with an unusually cold spell.

"In the winter, we have to burn more coal to get heating," says Zhou Rong of Greenpeace. She says around 50 percent of Beijing's air pollution is historically due to coal-fired power stations. "Another reason is the weather pattern makes the whole atmosphere very, very stable, and so all the air pollution accumulates down to the ground, so we are getting higher and higher air pollution." 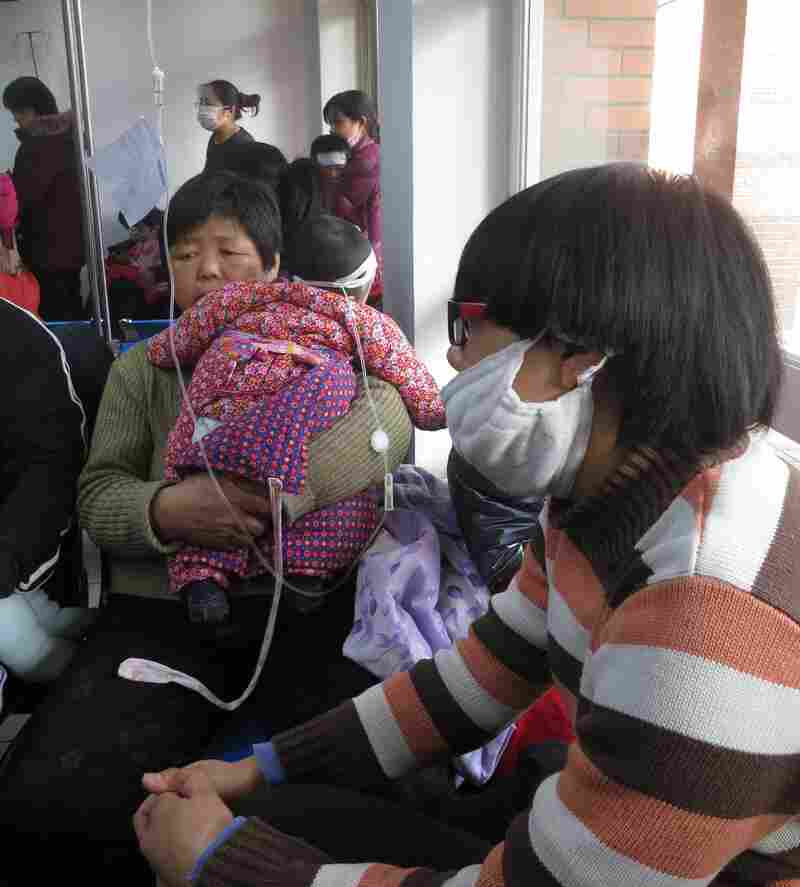 About 9,000 children per day consult doctors in Beijing's children's hospital, around a third of them suffering from respiratory disorders. Louisa Lim/NPR hide caption 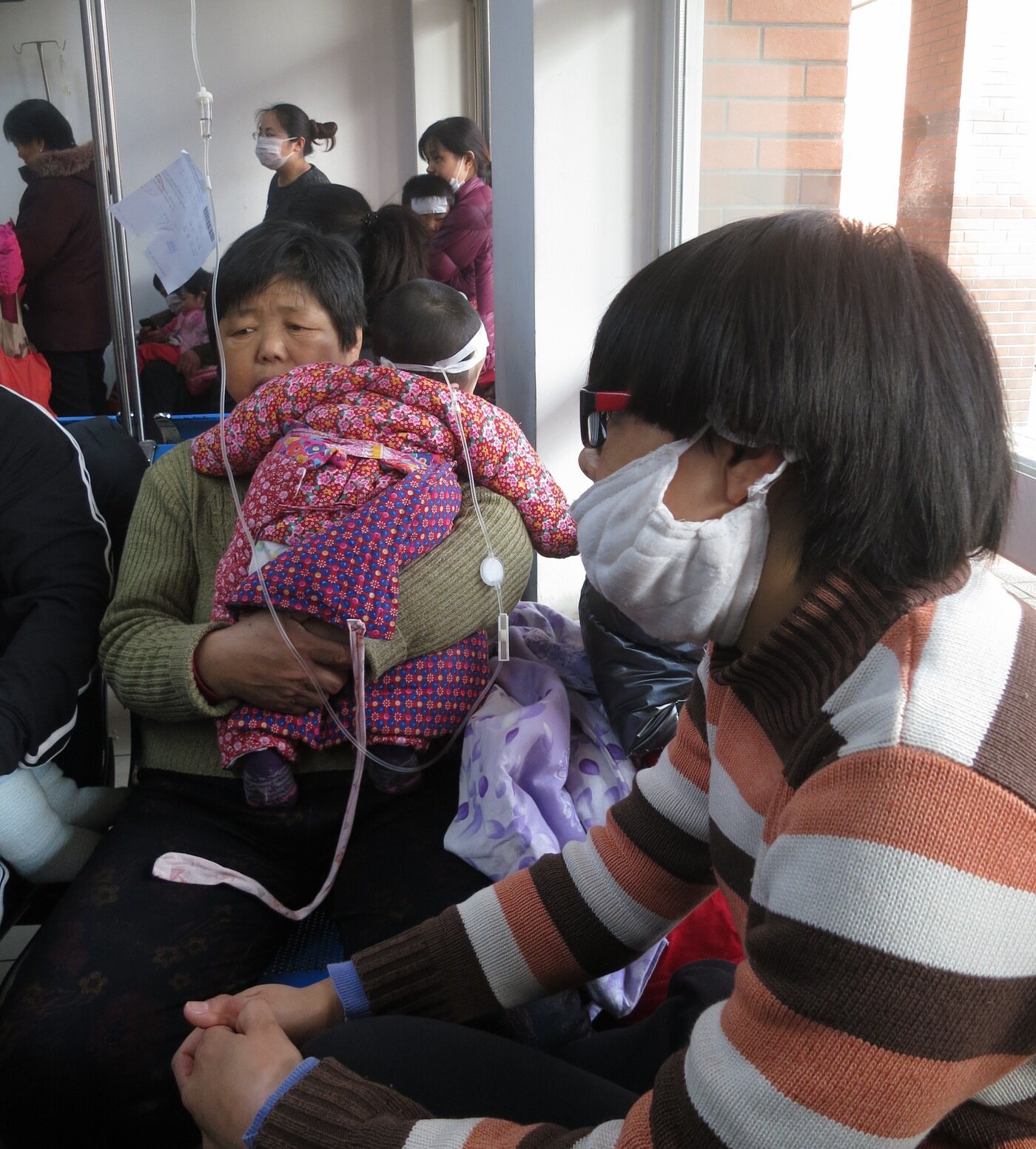 About 9,000 children per day consult doctors in Beijing's children's hospital, around a third of them suffering from respiratory disorders.

Unusually, the pollution is getting headline treatment on local news bulletins and in the domestic media. This is in stark contrast to the situation in previous years, when pollution was rarely acknowledged, let alone reported. Since the beginning of the year, the government has been releasing hourly pollution readings for 74 Chinese cities, almost half of which are now showing severe pollution.

"There's been clarity as to the severity of the problem, there's more frequent disclosure of information, but what remains to be seen is whether more aggressive action will be taken to solve the problem," says Alex Wang, an expert of Chinese environmental law at the University of California, Berkeley, law school.

This follows intense public pressure on the issue, driven by the fact that the U.S. Embassy in Beijing operates its own pollution monitor, releasing hourly figures by Twitter. In the past two years, citizens noticed large discrepancies between the official Chinese figures and the U.S. ones, and began to question whether the Chinese statistics had been fudged or falsified.

"In theory, with the greater transparency, that's harder to do — the falsification or cheating the data," says Alex Wang. "What will be interesting to see going forward is that now that they've become more transparent — releasing hourly data and so forth — does it actually force the regulators to take regulatory action?"

Beijing is taking emergency action: shutting down some building sites and polluting factories temporarily and taking almost a third of official cars off the road. It's also vowing to cut air pollution by 15 percent over the next three years.

But the surrounding provinces are actually stepping up coal consumption, dooming such pledges, according to Greenpeace's Zhou Rong.

"It's not going to work if Beijing city does the mitigation work alone," she says. "If the surrounding areas don't do the same work, Beijing will never get better air quality."

A study by Greenpeace and Beijing University focusing on four Chinese cities estimates the number of people dying prematurely from air pollution is close to three times that killed by traffic accidents.

Monday morning, Beijing's main children's hospital was packed to overflowing, with rows of infants hooked up to drips in the corridors outside the emergency clinic, and queues of patients waiting to see doctors. According to official media, recently this hospital has seen 9,000 patients per day, a third of them with respiratory diseases.

"Of course it's connected to the pollution," says Louise Huang, who's here with her 18-month-old son. He started getting sick the first day of the smog, even though she hasn't dared open the windows or go outside. "This must get better," she tells me. "I can't imagine how we'd live if it got worse."

"There are too many cars on the streets, too many factories," says Wang Ying, whose baby is suffering respiratory problems. When asked whether she worries about the world her child will inherit, she replies, "Of course I'm scared."

In the Chinese media, there's been some soul-searching about why the problem has been so intense. The China Daily took the country's rapid urbanization process to task, commenting in an editorial, "The air quality in big cities could have been better had more attention been paid to the density of high rises, had more trees been planted in proportion to the number of residential areas, and had the number of cars been strictly controlled."

Meanwhile, the Global Times has been pointing out China's role as the global factory and the "biggest construction site in the world."

"Seventy percent of global iron and steel, and about half of the world's cement is produced in China," it says in an editorial. "Against this backdrop, it is impossible for China to be as clean as the West."

Among local people, there are fears for the future. One song circulating online includes the lyrics, "I live in this smog, I don't want to die in this smog." This environmental crisis risks dragging down economic growth, and given growing public dissatisfaction, it could yet become a political problem for China's new leaders.