Accessibility links
Training Program Aims To Prep Soldiers For Civilian Jobs Thousands of Minnesota soldiers deployed in Kuwait woke up to a surprise last spring. Just weeks before the end of their tour, a group of corporate recruiters showed up on base. The visit was part of a new strategy to help returning service members find jobs after they've hung up their uniforms. 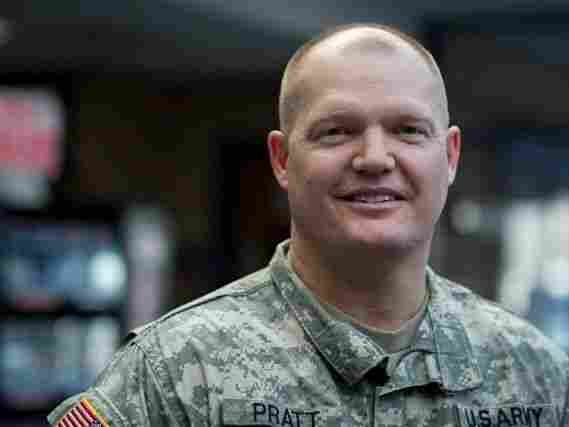 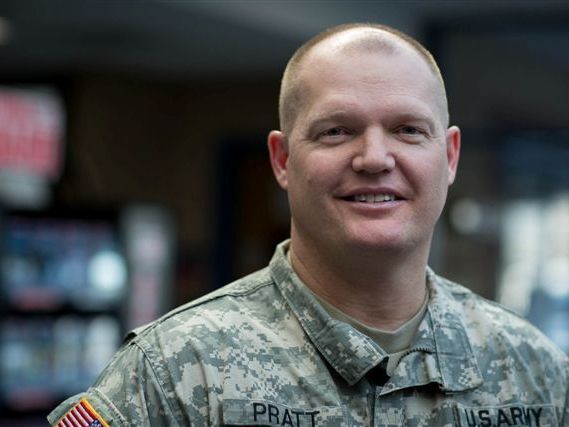 Thousands of Minnesota soldiers deployed in Kuwait woke up to a surprise last spring. Just weeks before the end of their tour, a group of corporate recruiters in business-casual attire showed up on base. The first-of-its kind visit was part of a new strategy to help returning service members find civilian jobs before their feet even hit U.S. soil.

More than a quarter of these 2,700 troops had no civilian jobs waiting for them at home. To help them, the Minnesota National Guard flew a specialized team from government, education and business to their military base for a week of intensive work — things like resume writing, career planning and even mock interviews.

Studies show unemployment for returning soldiers can play a role in a host of problems — like drug and alcohol abuse, family conflict and even suicide. And finding work after a tour of duty is especially tough for Guard and Reserve troops, who split their time between overseas deployments and civilian lives. It's often difficult to translate military experience to civilian skills, and employers, who don't know how long veterans will be around, may hesitate to hire them.

Best Buy recruiter Bruce Kiefner went on the trip. He says hiring more veterans is a priority for Best Buy. He went to Kuwait to help them improve their chances of being hired.

"They have that get-the-job-done attitude, and that's what has really attracted us to them. They are serious yet they have a personal side, and that's where we like to bridge that gap," Kiefner says. "We want the serious leader, but we also want someone that can take a breath and have fun with the team, and those are typically our best leaders."

The effort to help them intensified when troops got home. Experts worked one-on-one with every soldier.

The Guard says the effort has paid off. Of the more than 500 service members who needed jobs, officials say only about 35 are still looking for work.

Minnesota National Guard Capt. Ron Jarvi says the program was successful because it helped troops before they got overwhelmed with coming home.

"The reality is that you're trying to reintegrate with your spouse or with your kids or getting paperwork filed with the state and reinstating your license and doing all of the different things that you have to do to reintegrate," says Jarvi.

Capt. Jeff Pratt knows how overwhelming homecoming can be. The 46-year-old served two tours of duty in Iraq in the past 10 years. Despite his decades of civilian work experience, even he had difficulties landing the job he wanted. After getting help from the jobs initiative, he finally found the right position. He started last week as a risk-management analyst with Minnesota-based United Health Group.

Yet, as in many states, unemployment for military veterans remains a persistent problem. Minnesota National Guard officials are now expanding their jobs effort statewide, and they're helping other units across the country set up their own programs to help veterans get civilian jobs after they hang up their uniforms.