Accessibility links
More Young People Are Moving Away From Religion, But Why? One-fifth of Americans are religiously unaffiliated, and those younger than 30 especially seem to be drifting from organized religion. Six young adults — some with Jewish, Muslim, Christian and Seventh-day Adventist backgrounds — explore their struggle with faith and religion. 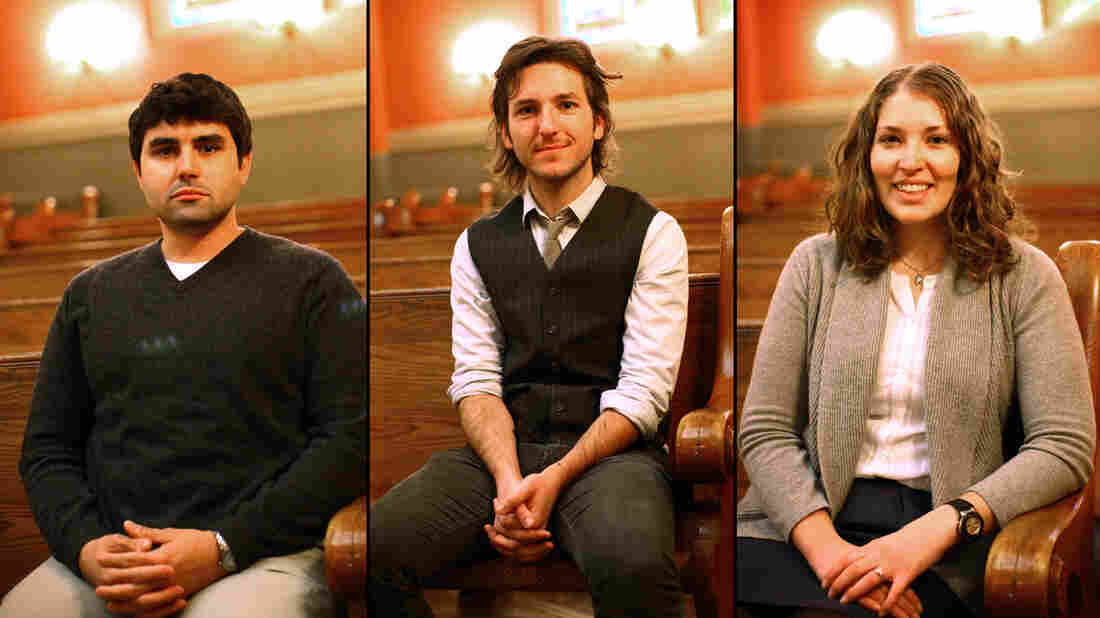 Rigoberto Perez (from left), Kyle Simpson and Miriam Nissly participated in a roundtable discussion about religion with NPR's David Greene at the Sixth & I Historic Synagogue. Coburn Dukehart/NPR hide caption 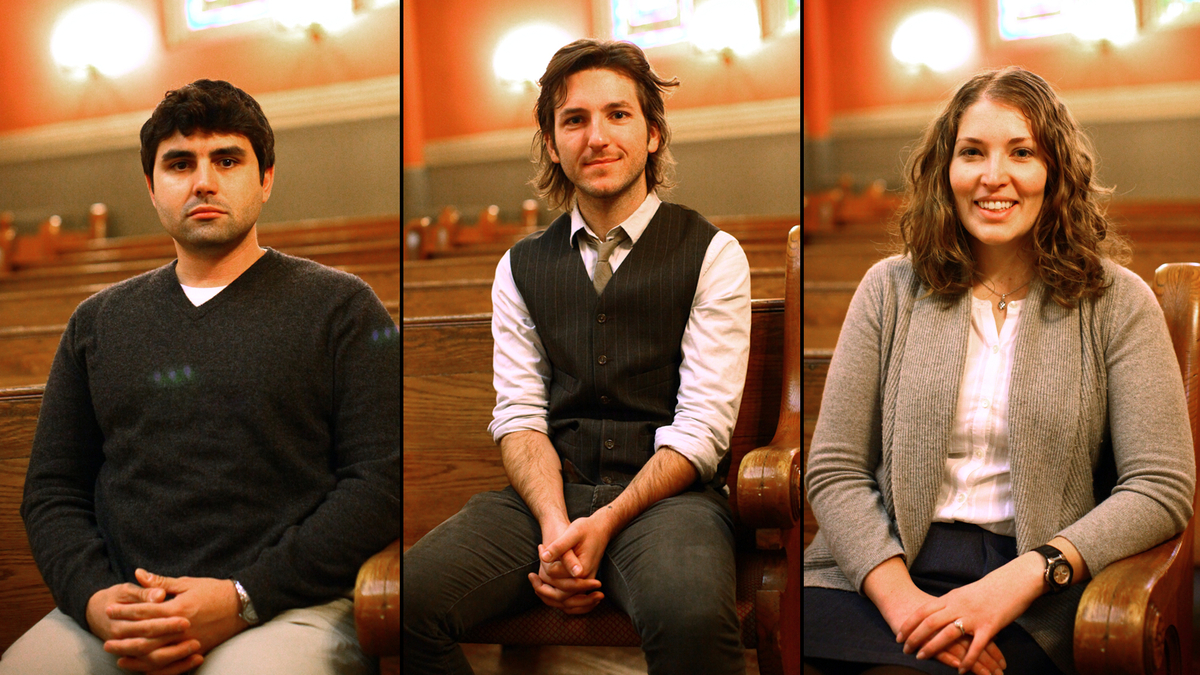 Rigoberto Perez (from left), Kyle Simpson and Miriam Nissly participated in a roundtable discussion about religion with NPR's David Greene at the Sixth & I Historic Synagogue.

One-fifth of Americans are religiously unaffiliated — higher than at any time in recent U.S. history — and those younger than 30 especially seem to be drifting from organized religion. A third of young Americans say they don't belong to any religion.

NPR's David Greene wanted to understand why, so he gathered a roundtable of young people at a synagogue in Washington, D.C. The 6th & I Historic Synagogue seemed like the right venue: It's both a holy and secular place that has everything from religious services to rock concerts. Greene speaks with six people — three young women and three young men — all struggling with the role of faith and religion in their lives.

Miriam Nissly, 29, was raised Jewish and considers herself Jewish with an "agnostic bent." She loves going to synagogue.

"I realize maybe there's a disconnect there — why are you doing it if you don't necessarily have a belief in God? But I think there's a cultural aspect, there's a spiritual aspect, I suppose. I find the practice of sitting and being quiet and being alone with your thoughts to be helpful, but I don't think I need to answer that question [about God] in order to participate in the traditions I was brought up with."

Yusuf Ahmad, 33, raised Muslim, is now an atheist. His doubts set in as a child with sacred stories he just didn't believe.

"Like the story of Abraham — his God tells him to sacrifice his son. Then he takes his son to sacrifice him, and he turns into a goat. I remember growing up, in like fifth [or] sixth grade I'd hear these stories and be like, 'That's crazy! Why would this guy do this? Just because he heard a voice in his head, he went to sacrifice his son and it turned into a goat?' There's no way that this happened. I wasn't buying it.

"Today if some guy told you that 'I need to sacrifice my son because God told me to do it,' he'd be locked up in a crazy institution."

Kyle Simpson, 27, raised Christian. He has a tattoo on the inside of his wrist that says "Salvation from the cross" in Latin.

"It's a little troublesome now when people ask me. I tell them and they go, 'Oh, you're a Christian,' and I try to skirt the issue now. They go, 'What does that mean?' and it's like, "It's Latin for 'I made a mistake when I was 18.'

"When I first got the tattoo I remember thinking, 'Oh, this will be great because when I'm having troubles in my faith I will be able to look at it, and I can't run away from it.' And that is exactly what is happening.

"I don't [believe in God] but I really want to. That's the problem with questions like these is you don't have anything that clearly states, 'Yes, this is fact,' so I'm constantly struggling. But looking right at the facts — evolution and science — they're saying, no there is none. But what about love? What about the ideas of forgiveness? I like to believe they are true and they are meaningful.

"I think having a God would create a meaning for our lives, like we're working toward a purpose — and it's all worthwhile because at the end of the day we will maybe move on to another life where everything is beautiful. I love that idea." 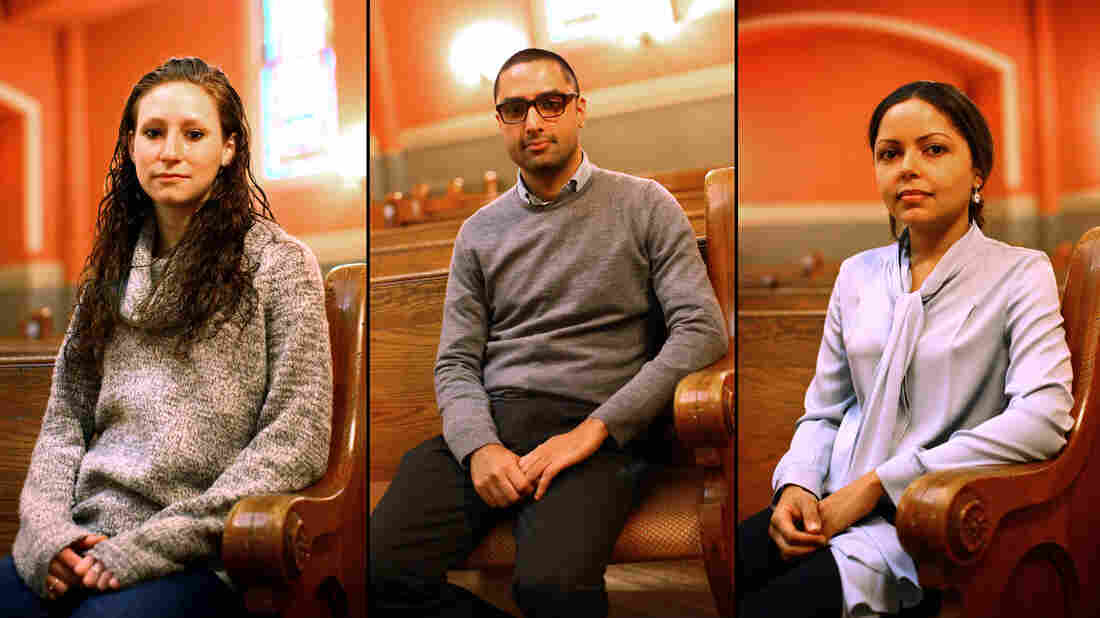 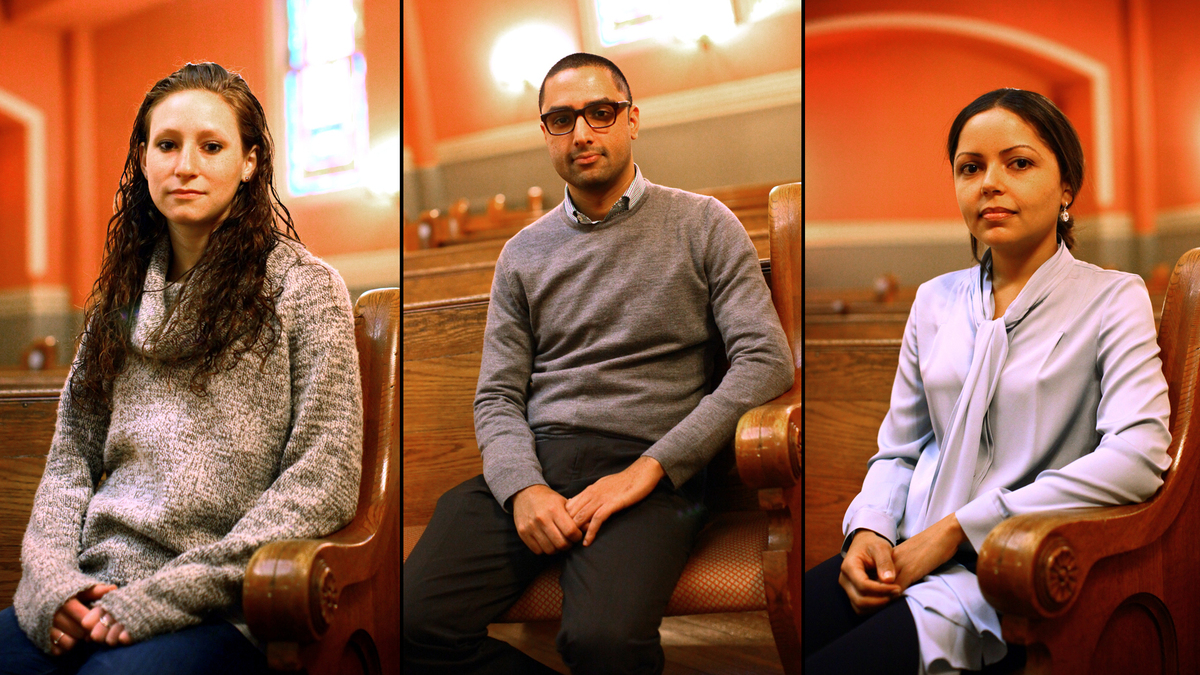 Lizz Reeves (from left), Yusuf Ahmad and Melissa Adelman also participated in the discussion about religion with NPR.

"Starting in middle school we got the lessons about why premarital sex was not OK, why active homosexuality was not OK, and growing up in American culture, kids automatically pushed back on those things, and so we had some of those conversations in school with our theology teachers. The thing for me — a large part of the reason I moved away from Catholicism was because without accepting a lot of these core beliefs, I just didn't think that I could still be part of that community.

"I remember a theology test in eighth grade where there was a question about homosexuality, and the right answer was that if you are homosexual, then that is not a sin because that's how God made you, but acting upon it would be a sin. That's what I put down as the answer, but I vividly remember thinking to myself that that was not the right answer."

"It was a fairly important part of our lives. It was something we did every Saturday morning. We celebrate the Sabbath on Saturday. It was pretty hard growing up in a lot of ways. We didn't have a lot of money, the household wasn't very stable a lot of the time, so when something bad would happen, say a prayer, go to church. When my mom got cancer the first time, it was something that was useful at the time for me as a coping mechanism.

"While I was younger, my father drank a lot. There was abuse in the home. My brother committed suicide in 2001. So at some point you start to say, 'Why does all this stuff happen to people?' And if I pray and nothing good happens, is that supposed to be I'm being tried? I find that almost kind of cruel in some ways. It's like burning ants with a magnifying glass. Eventually that gets just too hard to believe anymore."

Lizz Reeves, 23, raised by a Jewish mother and a Christian father. She lost a brother to cancer.

"I wanted so badly to believe in God and in heaven, and that's where he was going. I wanted to have some sort of purpose and meaning associated with his passing. And ultimately the more time I spent thinking about it, I realized the purpose and meaning of his life had nothing to do with heaven, but it had to do with how I could make choices in my life that give his life meaning. And that had a lot more weight with me than any kind of faith in anything else."