Accessibility links
Bangkok: A City Of Glitz, A City Of Desperation Bangkok has seen spectacular growth in recent decades, but this has created a city divided by wealth and poverty. As part of a series on income inequality worldwide, GlobalPost looks at the disparities in Thailand's capital.

Editor's note: Our partner GlobalPost is launching a series that looks at wealth and poverty worldwide by comparing U.S. metro areas with foreign cities that have similar levels of income inequality. The findings may surprise you. This story from Bangkok and a companion piece from Fairfield County, Conn., examine two places where the superrich and the very poor live just minutes apart.

The first involves ducking cops, consorting with junkies and hardening your neighborhood's rep as a crime-infested no-go zone. Klong Toei's reputation for selling "ya ba" — pink meth tabs that smell like cotton candy when smoked — is second only to its reputation for catching on fire. Flames easily leap between dwellings in the slum, a labyrinth of buildings packed so tight that alleys remain dim under the Thai noontime sun.

In lieu of meth, Boat Thammongkul, 20, has chosen to work the nearby docks.

"We move heavy stuff at the pier for 500 baht a day," Boat says. That's roughly $16 for nine hours at the Klong Toei wharf, a critical hub in Thailand's export economy and the chief employer of nearby slum dwellers. 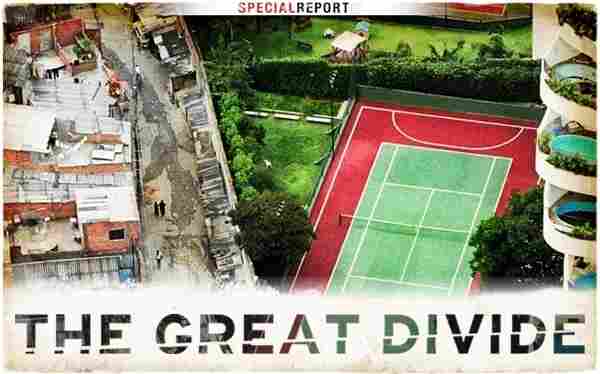 "Just because people around me sell drugs doesn't mean we have to," he says. "Besides, I have a dream. One day, I want to work at a job indoors. With air-conditioning."

Small dreams and hard labor define the view from Klong Toei. But in Bangkok, a city divided by wealth and class, a mere 5 miles separates the slums from a glam shopping paradise feeding the appetites of an emerging middle class and a rising upper class.

Weight-conscious ladies can choose from multiple outlets promising to eradicate cellulite with acoustic waves or, for $700, destroy belly fat with a freezing electronic wand. CEOs set on enhancing their karaoke skills can shell out $650 for singing lessons tailored for corporate executives.

This is a world unknown to Boat and his friends, a crew sporting the signature look of the Klong Toei dude: shirtless, scribbled up with tattoo ink, lean-muscled bodies shaped by manual labor and a diet of cheap noodles.

"You say 'Klong Toei' and all people see are junkies," said Kwan Khetpratum, another 20-year-old dock worker who lives near Boat. "If I walked into the malls, the fancy people would look at me strangely. I've never even thought of going there."

Comparison To The U.S.

Most Americans will find it easy to write off Thailand's rich-poor class divide as predictable in a distant, developing country known for cheap holidays and military coups.

But perhaps they shouldn't. When it comes to income inequality, Thailand and the U.S. bear a startling statistical resemblance.

According to U.S. government figures, America's wealthiest 20 percent control a bit more than half of the national income. The same is true in Thailand, according to the World Bank.

In Connecticut, Two Sides Of A Deep Economic Divide

Rich Americans' counterparts at the bottom, the poorest 20 percent, take in 3 percent of the national income. In Thailand, the corresponding figure is nearly the same: 4 percent. The world's premier measure of income disparity, the Gini coefficient, suggests that Thailand's nationwide wealth disparity is equivalent to that of Bridgeport, Conn., or Washington, D.C.

As the nation grows more prosperous, the ranks of the superrich keep swelling. According to the Switzerland-based Julius Baer group, which tracks wealth, Thailand's stock of 47,000 millionaires in 2010 could swell to as many as 136,000 by 2015.

Thais even have a homespun word for their modern, moneyed jet set: "hi-so," inspired by the English term "high society."

The vast chasm between the superrich and struggling poor shows few signs of narrowing, according to Thai economist Pasuk Phongpaichit, who wrote in a recent analysis that "inequity will continue to be Thailand's Achilles' heel."

A United Nations report on Thailand, which was officially endorsed by the Thai government, was written by researcher Gwi-Yeop Son, In the report, Son attributes the gap, in part, to "the overhang of patron-client ties, the culture of deference and inequities reinforced by the petty rituals of everyday life."

Thailand, she contends, is a "very unequal society" with a "growing awareness that inequality lies at the root of several forms of human insecurity, including rising political conflict." 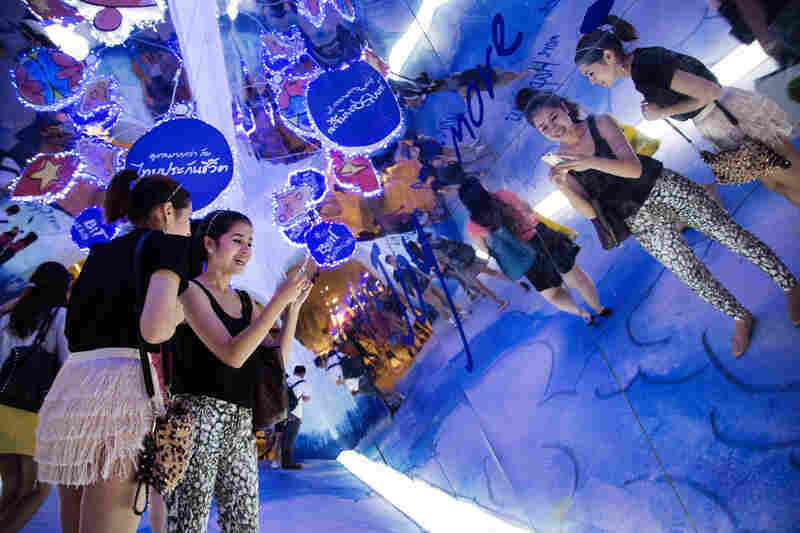 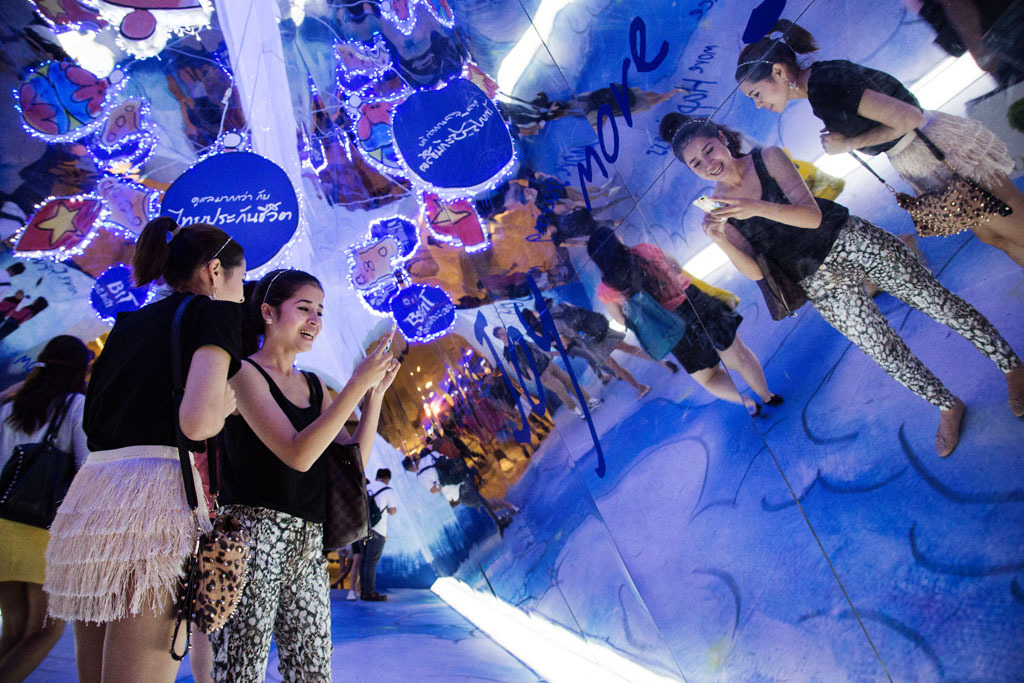 In both America and Thailand, a national debate over this division of wealth has spilled onto the streets. Albeit with very different degrees of intensity.

The U.S. has seen Occupy Wall Street, the ill-defined, sit-in movement that cast America's top earners as a gluttonous "1 percent." Thailand's self-proclaimed have-nots are the Red Shirts street faction, which contends the U.S.-backed democracy more closely resembles a feudal serfdom lorded over by aristocrats. The Red Shirts have been involved in sustained, violent clashes against government troops, which erupted two years ago, a heated conflict that seems to be simmering on a lower burner now.

In Thailand, "song matratan" — translation: double standards — has become the go-to shorthand for those who believe wealth and connections typically trump the rule of law. The phrase, popularized by the Red Shirts, has sunken into the national consciousness.

But even senior politicians with sympathies toward the protest movement are apt to belittle grumblings over "double standards," which suggest their entire system is broken.

"This has become a way of thinking in Thai society," says Nikom Wairatpanij, the president of Thailand's Senate. "If people see they're losing out, they'll say it's 'double standards.' If they're getting their way, they'll admit there's a single standard."

"People probably do this everywhere," Nikom says. "But maybe it doesn't manifest itself as violently as it does here."

The Scene Of Violence

From within Central World, perhaps Bangkok's hippest mall, there is little to suggest that the complex was recently the scene of Thailand's worst political violence in decades.

On May 19, 2010, its facade was swallowed by orange flames. The mall's glass exterior panes exploded into shards, sprinkling the plaza below. The muzak was replaced by squealing fire alarms. Black smoke swept across the downtown skyline.

Among mallgoers, the image of this chic emporium ablaze has come to symbolize class rage run amok. "What they did, it was horrible. It was economic violence," said Aek Wiyasak, a 27-year-old tourism officer who frequents the mall district. "The world looked on, afraid to come to our country, probably thinking Thailand is a horrible place."

The shopping district, lined with glowing Gucci and Burberry storefronts, was the Red Shirts' chosen site for their largest-ever protest encampment. Their faithful ringed it with razor wire and bamboo spikes and refused to leave until the government called new elections.

By the time the anti-establishment movement was finally crushed by guns-blazing infantry units, the chaos left behind nearly 100 corpses, 2,000 injuries and a series of buildings torched by arsonists widely assumed to have come from the Red Shirts' embittered ranks.

But like the wounded limb of a starfish, the mall's torched wing has re-grown as if never attacked. Today, after an $88 million reconstruction project, shoppers pouring in and out of Central World face few reminders of the blaze that nearly burned the mall to the ground.

Unless, of course, they come to shop during an appearance by Sawitseree Rorbruu, a 60-something Red Shirt sympathizer who occasionally sets up a public address system by the mall. She and like-minded political agitators are bent on telling shoppers that, instead of lamenting their handbag shops going up in smoke, they should be mourning the scores of protesters killed during Thai army raids.

"These hi-so people look down at us," Sawitseree says. "If they see us crying out, they'll say, 'These damned people, these weeds, they're poor and stupid and have no schooling.' We are not like them. We are the ones who eat curry by the roadside for 20 baht (65 cents). They eat their curry on the mall's top floor for 60 baht ($1.95)."

Many of Thailand's upper classes — high-society especially — roll their eyes at the movement's peasants-vs.-aristocrats rhetoric. They insist the protesters were pawns paid by politicians to raise hell and hold the economy hostage. The movement was funded and goaded on by ex-premier Thaksin Shinawatra, a billionaire mogul ousted in a 2006 army coup. His younger sister, Yingluck, now serves as prime minister.

"Obviously, someone told them to burn down the mall," said Udaiwan Niyomseree, a Siam Paragon regular. "They are just little people fighting. But their actions affect the entire country."

Appearance-wise, the 26-year-old embodies the hi-so: milky skin, twinkling jewelry, an auburn dye job and an educated Thai's command of English. But she rejects the label. "The hi-so are pretty people, buying lots of stuff, never thinking of the price," Udaiwan said. "My family is just not rich enough."

Patrick Winn is the GlobalPost correspondent for Southeast Asia.