Accessibility links
After Tragedy, Nonbelievers Find Other Ways To Cope Many have long turned to religion for solace in the aftermath of a tragedy, but that's not an option for the nonreligious or those whose faith is destroyed by the event. For the nonreligious, dealing with trauma and loss often requires forging one's own path. 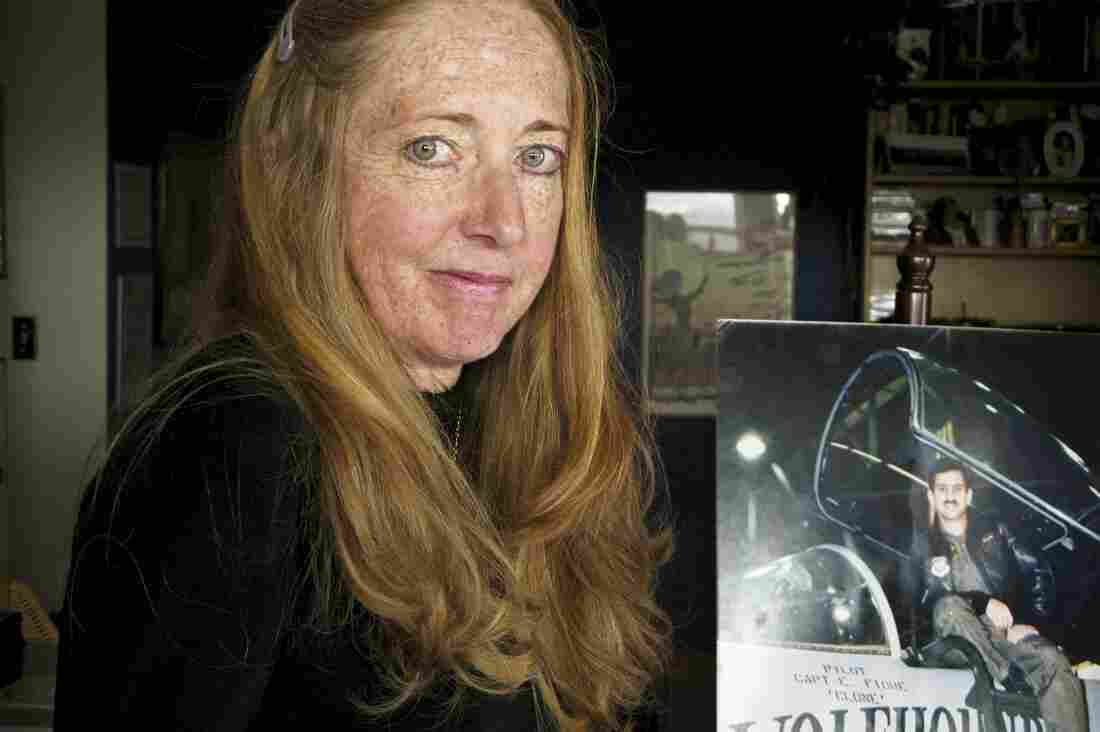 Carol Fiore's husband, Eric, died after the plane he was test-piloting crashed in Wichita, Kan., 12 years ago. An atheist, Fiore felt no comfort when religious people told her Eric was in a better place. Barbara Bradley Hagerty/NPR hide caption 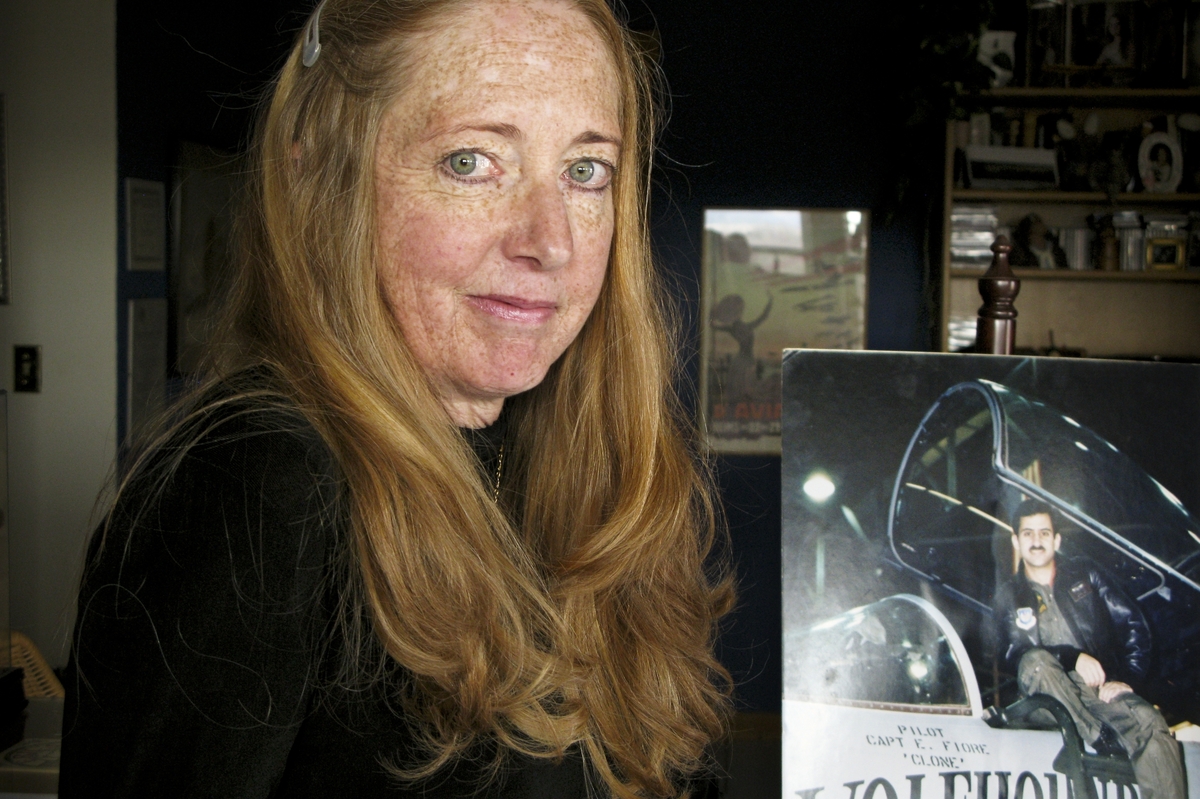 Carol Fiore's husband, Eric, died after the plane he was test-piloting crashed in Wichita, Kan., 12 years ago. An atheist, Fiore felt no comfort when religious people told her Eric was in a better place.

The Mile High Gliding facility at the Boulder Airport in Colorado is one of Carol Fiore's favorite haunts. And it's a perfect day for flying: clear, breezy and with a gorgeous view of the Rocky Mountains.

Fiore used to fly gliders regularly, but a few years ago she stopped. Flying them had become painful.

"I felt, in a way, that I was searching for something that wasn't there," Fiore says. "I was looking for that laughter and that incredible time that I had flying with Eric, and he wasn't in the plane with me. I was by myself."

Eric was Fiore's husband for 20 years. After they married, he flew F-15s in the Air Force. Then the couple moved to Wichita, Kan., where he was a test pilot for the airplane manufacturer Bombardier.

On Oct. 10, 2000, the plane Eric was co-piloting crashed upon takeoff. When Fiore arrived at Via Christi Hospital, she learned that her husband had sustained burns over 50 percent of his body.

"Then I found out they had given him his last rites," she says.

That wasn't a surprise, since Via Christi is a Catholic hospital. But even after Fiore announced that Eric would not want anyone praying for him, a priest hovered and prayed, day after day. Finally, she kicked the priest out.

Bristling At 'A Better Place'

"I think that was a turning point in the whole religion thing for me," Fiore recalls. "That was the point when I said, 'You know what?' — and I told Eric this when he was laying there on the bed — I said, 'Eric, I don't care anymore that we have to pretend not to be atheist.'

" 'We respected people's religions our whole entire life and I can't do it anymore,' " she told him. " 'People are going to respect you now, and you told me you didn't want them praying over you, and that's it.' "

Fiore told everyone that she and Eric were atheists. And still, as he lingered near death for 36 days, people offered religious consolation. "God has a plan," they told her. "Eric is going to a better place."

I became more angry and I questioned, 'Why do I need to be praying at all? Why is my son dead? And what kind of God lets a child be shot?' "

"When he was in the hospital and they said that, he was lying in a bed with tubes coming out with 50 percent burns and no face," Fiore says. "Is that a better place?"

Fiore continued to hear the sentiment after Eric's death. "I'm an atheist," she says. "Eric is in the ground, rotting. I know it sounds horrible to say that, but that is where he is. How is that a better place?"

After Eric's funeral — which was held in an airplane hangar, not a church — Fiore was flailing. She was hardly able to take care of herself, much less her two young daughters. All the grief groups she found were attached to a church ... so she tried the self-help section of Barnes & Noble.

"I was searching frantically for anything that would help me get through this," Fiore recalls. "But everything I found had to do with God: putting your faith in God, believing that God had some sort of plan. I found nothing to help me."

Fiore realized she would have to go it alone. She and her two girls moved from Wichita to Loveland, Colo., and as a coping mechanism, she began to write a book — not yet published — about her husband, as well as a grief workbook for atheists.

But mainly, it's her daughters who give Eric's tragic death some measure of meaning.

"I don't believe in an afterlife and I don't think I'll see him anymore," Fiore says. "But I just have to look in Tia's eyes and hear her laugh, and hear Robin talk about history the same way that Eric did, and know that he is still there."

Fiore's daughter Robin, a student at the University of Colorado, Boulder, plans to go on to graduate school in science. She says she sees her father's genetic influence in herself and in her sister.

And yet, her mother believes it's harder for her to grieve because she's an atheist. 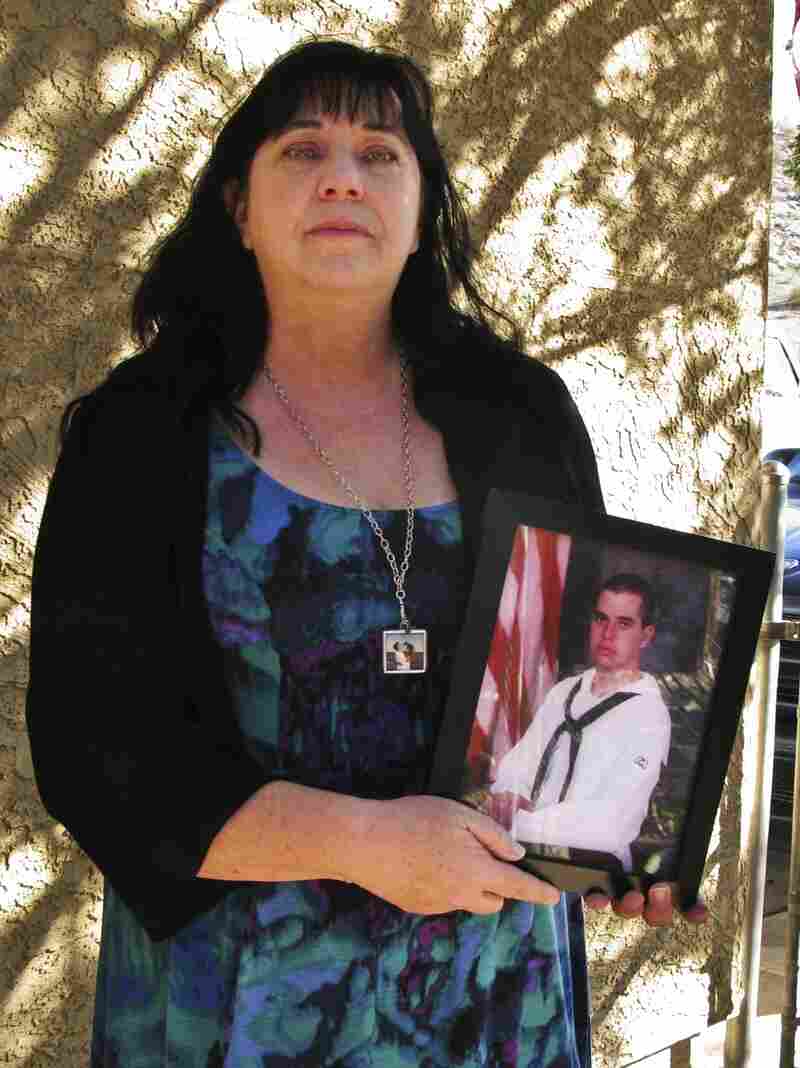 When Mari Bailey's son, Michael, was killed by an acquaintance in Phoenix in 2004, she lost not only her son but her faith as well. Barbara Bradley Hagerty/NPR hide caption 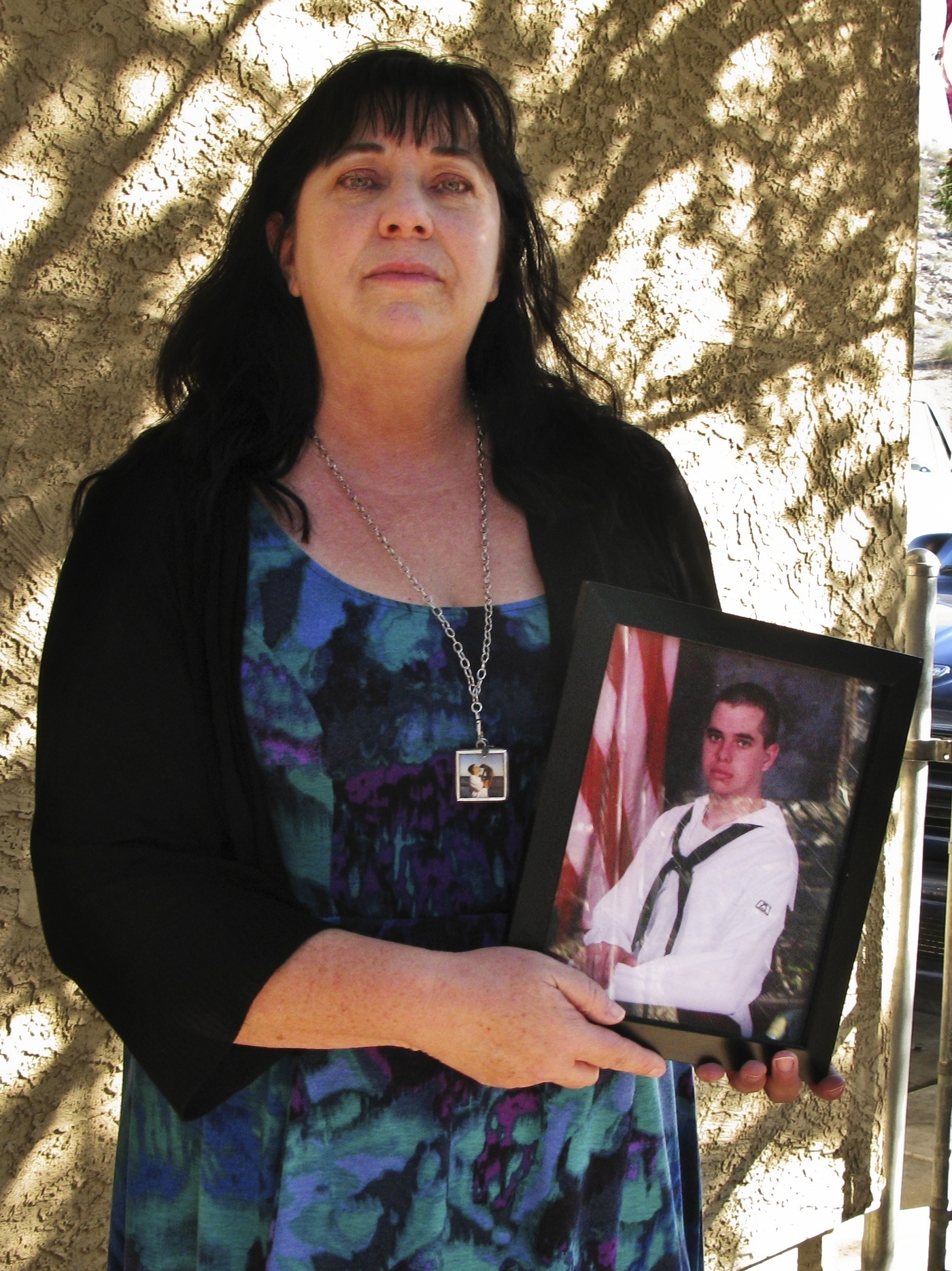 When Mari Bailey's son, Michael, was killed by an acquaintance in Phoenix in 2004, she lost not only her son but her faith as well.

"I often envy religious people who have that devout faith," Fiore says. "They know that they're going to see their ... loved ones again when they die. But I don't believe that. Sometimes, I wish I did."

This is a sentiment that Joanne Cacciatore, a professor at Arizona State University, hears often. After her baby died in 1994, Cacciatore started the MISS Foundation, a grief group for parents that has since extended nationwide. She also began focusing her research on how people grieve after a child dies.

Cacciatore says the group has observed that people with some type of spiritual base don't necessarily cope more easily with the loss, but "they tend to take comfort or solace by the fact that they'll be reunited with their child at some point," she says.

Cacciatore says she's seen nonbelievers embrace spirituality, and religious people wash their hands of God, in the aftermath of tragedy. But most often, she says, tragedy shakes your faith but doesn't destroy it.

"What we find in the research — my own research and in other studies — is that their faith is generally challenged in some way," she says. "And yet, they tend to come back full circle to a place of spiritual belief or faith."

One theme is clear, Cacciatore says: Religious leaders are really bad at comforting people in grief. She surveyed more than 550 families, asking whom they found the most helpful during those first terrible days: first responders, doctors and nurses, social workers, psychologists, funeral directors or spiritual leaders.

"And of all of those, the spiritual leaders actually came in last," she says.

This is something Mari Bailey can understand. She's parked across from a brown stucco house in Phoenix. And while it isn't her home, she knows it well.

"When you walk in, there's a kitchen, a very small kitchen," Bailey says. "And that's where Michael was shot."

Her only son, Michael, was 21, fresh out of the Navy and newly enrolled in culinary school when he was killed in that house in August 2004. Bailey's last memory of her son is vivid, hopeful.

"Michael had changed into his chef's uniform, with his checkered pants and poofy hat, and he looked so cute," Bailey recalls. "He said, 'Well, Mom, I'm ready for school.' He said, 'I love you,' and gave me a big hug. And that was the last time I saw him fully conscious."

After school, Michael went to a friend's house. An acquaintance dropped by and started yelling and waving a gun around. He shot Michael close up, square in the chest.

"That was when my world just shattered," Bailey says. Soon, her faith would follow.

After Michael died, Bailey sought solace at St. Francis Xavier Catholic Church, where she and her siblings were baptized and took their First Communion. The priest there told her, "We all have our crosses to bear," and, "It was time for God to call Michael home."

But Bailey thought a priest couldn't possibly understand the pain of losing a child.

"I just remember thinking, 'That's it. I'm done with the Catholic religion,' " Bailey says. "I think it got more personal with God when I tried just praying on my own. Then I became more angry and I questioned, 'Why do I need to be praying at all? Why is my son dead? And what kind of God lets a child be shot?'

"And, I think that was more me, not only just leaving the Catholic religion, but that was me leaving God, too," Bailey says.

But that decision brought her no relief.

"It was hard. It was a really hard break from religion to, 'Uh oh, what am I going to use to save me now?' And I really came to the realization that, yeah, I'm alone in this and I need to save myself," she says.

Bailey saved herself by learning everything she could about traumatic grief — the subject of her dissertation.

Education helps her, she says, because "even though you might be falling apart into a million pieces, you at least know why, and where you're at in the process. And you also know what's going to happen next, according to the research."

The research suggests one of the best ways to heal is to help others. Bailey runs a grief group for students in the high school where she teaches, and another for parents whose pain is usually fresher than her own.

It is here, in the pain, that Bailey feels a little more whole. And yet, she can't quite abandon the hope of seeing her son again.

"For the sake of Michael, I just need to believe that there is more to life beyond death," she says. "Because if it's not, than that means that my son's life is over completely."

Bailey wishes she could believe in God again. But, she says, "I just can't."