Accessibility links
Movie Review - 'The Last Stand' - Schwarzenegger Turns In A Tired Comedy Arnold Schwarzenegger is back in action-hero character for the spaghetti-Western splatterfest The Last Stand. He's having a reasonably good time in a scattershot shoot-'em-up that stumbles too often on its way to an ending. 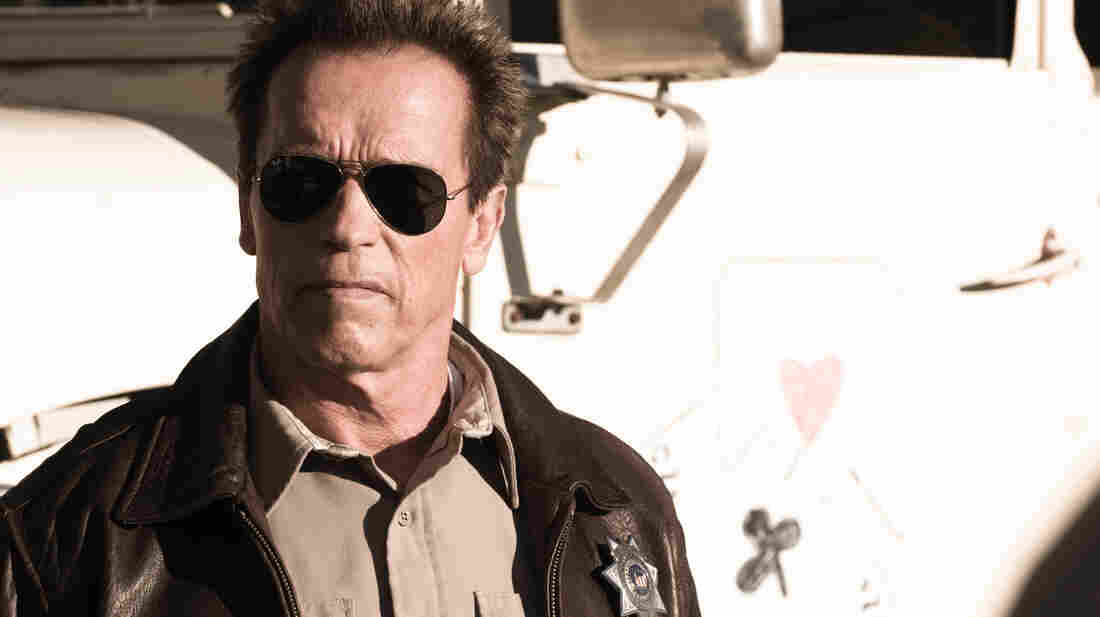 Rated R for strong bloody violence throughout and language

'Where's the Fire Coming From?'

'Where's the Fire Coming From?'

He has repeated the catchphrase over and over again, though he really had to say it only once: No one ever doubted for a minute that Arnold Schwarzenegger wouldn't be back.

How you feel about the hit-or-miss neo-spaghetti-Western The Last Stand may depend on how much you really missed Schwarzenegger while he was taking time off from acting to serve two terms as governor of California.

As Ray Owens, the sheriff of tiny, sleepy Sommerton Junction, Schwarzenegger looks kind of OK, with a deep Coppertone tan and hedgehog hairdo. Owens used to be a Los Angeles police narcotics guy, but a botched operation left him yearning for a quieter life, which is why he's retreated to this dusty little border town some 200 miles outside Las Vegas.

Now, as he learns from a know-it-all FBI agent played by Forest Whitaker, an escaped fugitive named Gabriel Cortez (Eduardo Noriega) is headed his way. At first, Owens is mildly indifferent; then he realizes he must protect the townspeople, particularly since Cortez has sent an advance team of baddies, led by a dyspeptic-looking Peter Stormare, to clear the path for his arrival.

Twenty Villains Arnold Schwarzenegger Should Fight In 'The Governator'

When Owens finally leaps into action, he has help from, among others, a lackadaisical deputy (played with laid-back elan by Luis Guzman) and the half-witted proprietor of a makeshift firearms museum (Johnny Knoxville, who, clad in pajamas and a pointed medieval warrior's helmet, resembles a maniacal militant elf).

Schwarzenegger still looks robust, but he isn't as efficient in the ass-kicking department as he was 30 years ago, and the script — written by Andrew Knauer, Jeffrey Nachmanoff and George Nolfi — reflects that.

"How are you, Sheriff?" one guy asks after seeing Owens take a particularly jarring tumble. "Old," Owens replies, with more than a hint of resignation. Hey, it happens to the best of us. 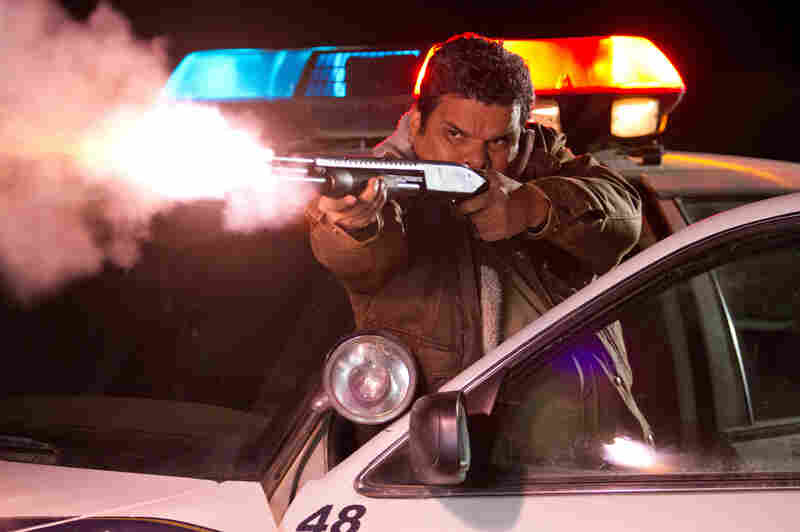 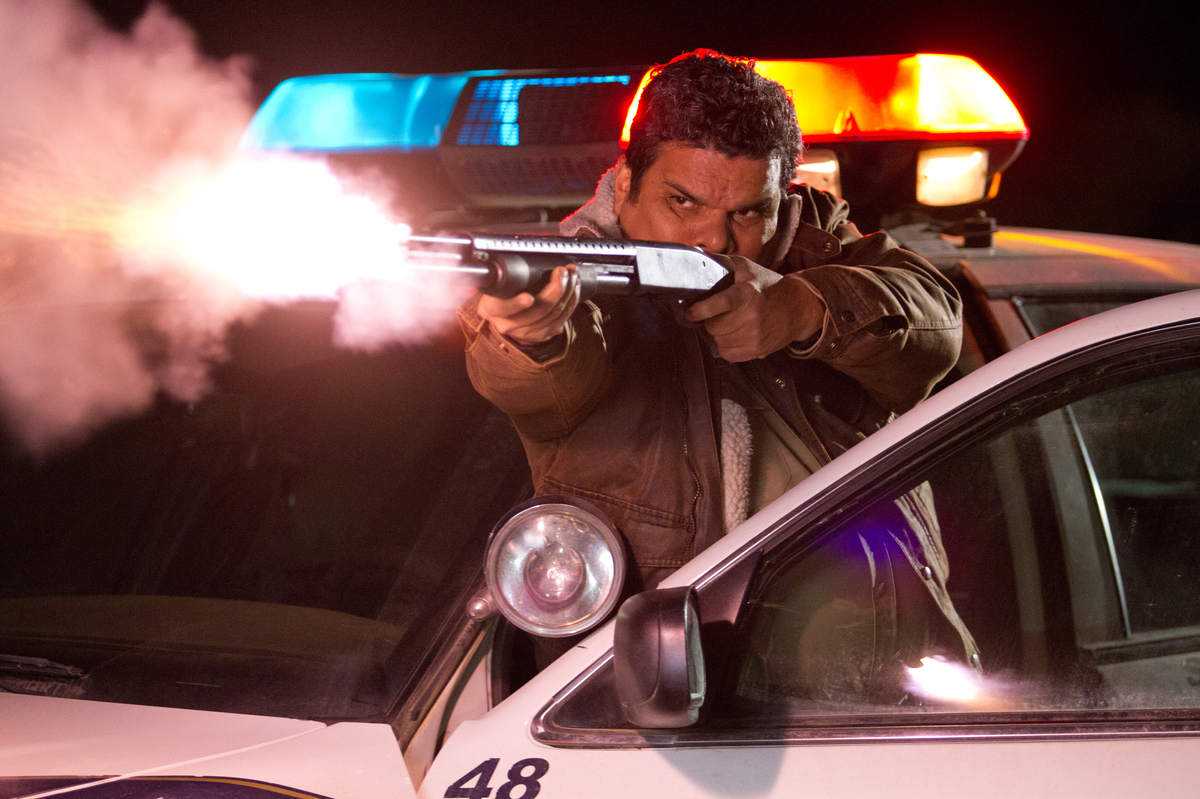 Schwarzenegger is the big draw here, and he seems to be having a reasonably good time, getting roughed up here and there and putting his trademark "What, me worry?" line delivery to use. (His scenes with the eternal goofball Knoxville are the nuttiest and perhaps the best.)

The Last Stand was directed by Korean cult-favorite filmmaker Kim Jee-woon, whose previous pictures include the rambunctious 2008 noodle Western The Good, the Bad, the Weird and, from 2003, A Tale of Two Sisters, a dreamy, enigmatic bit of free-verse horror.

The Last Stand isn't as effective as either of those movies. Its attempts at violent humor are scattershot, though occasionally Jee-woon and his actors hit the mark. (The sight of crazy old Knoxville using a flare gun as an assault weapon works like a charm, for instance.) But most of the action sequences are indistinctly shot and choppily edited; they flip by in a blur of noise.

The director does pull off a pretty magnificent cornfield car chase — two sleek vehicles cut through a thick, shaggy carpet of maize like souped-up harvesters, the movie's way of saying that the simple country life needn't be devoid of thrills. But Jee-woon takes too long to wrap things up, fumbling repeatedly on his way to an ending. By the end, even Schwarzenegger looks worn out. Maybe being governor wasn't such a hard job after all.