Accessibility links
Movie Review - 'Hors Satan' - A Singularly Devilish Vision Director Bruno Dumont is an odd fit in the modern cinematic landscape, but that doesn't take away from the singular beauty of his new film. 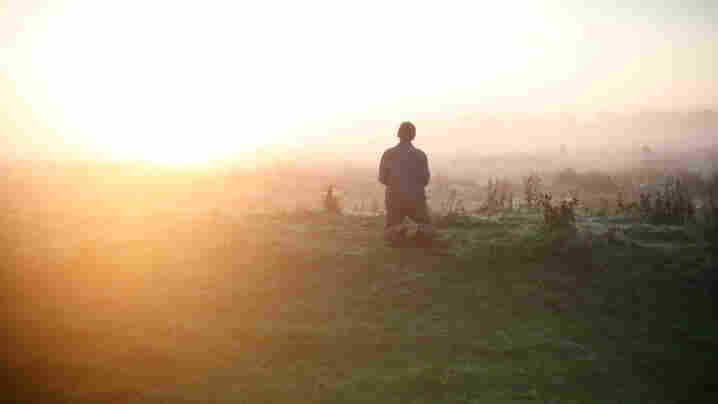 Bruno Dumont just wasn't made for these cinematic times. Rather than cajole and flatter his viewers, the French filmmaker intentionally alienates and mystifies them. Like his five previous movies, the new Hors Satan is stark, strange and uncompromisingly personal. It's also vivid and unforgettable.

Dumont's first feature, released in 1997, was The Life of Jesus. Satan and Jesus can be hard to distinguish in the director's work, which flaunts a harsh view of life and nature — human or otherwise — in the north of France. The central character in Hors Satan ("Outside Satan" in English) is a miracle worker who also happens to be a murderer.

Watch A Clip From 'Hors Satan'- "You Saved Me'

Watch A Clip From 'Hors Satan' - Walk On Water

Watch A Clip From 'Hors Satan'- 'Are You Dumb Or What?'

Watch A Clip From 'Hors Satan' - 'I Can't Take It Anymore'

'I Can't Take It Anymore'

Identified only as The Guy, and played by the impressively impassive David Dewaele, this apparently holy man lives outdoors, in the dunes of a national wilderness preserve near the Atlantic coast. His principal link to humanity is The Girl (Alexandra Lematre), a goth teenager whose home is a nearby farm. The only character in the movie whose name is ever mentioned is Hugo, a dog.

The Girl comes to the middle-aged Guy when she can't take her stepfather's abuse any longer. He takes care of the problem. The two then spend a lot of time together, although they don't devote much of it to conversation. (Dumont and his protagonists are all men of few words.) Sometimes, they kneel in prayer.

The deity to which they pray is unspecified. Although Dumont's worldview was clearly shaped by an austere French Catholicism, on one level Hors Satan is an act of nature worship. The story is told in rapturous widescreen images, and the sound, all recorded on location, treats breezes, burbles and chirps as a heavenly choir. Additional music is unnecessary.

It soon becomes clear that the Girl has a crush on the Guy. He, however, is not interested. Rather than take her as a lover, he'd rather train her as an apprentice saint. 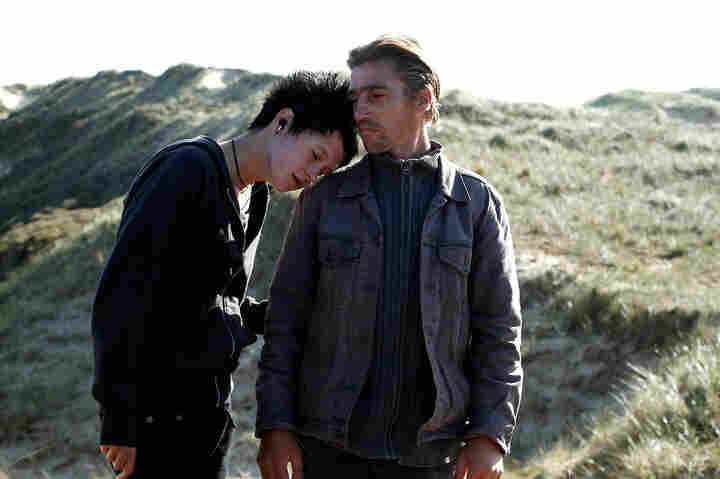 Eventually, one of Dumont's trademark outdoor mating scenes reveals that the Guy is not immune to sexual temptation. This utterly unromantic encounter may say less about the Guy, however, than about Dumont. The director dryly reduces rural existence to sex and death, with few of the niceties city folk use to veil their essentially animal character.

The Girl isn't the only one who relies on the Guy. At one point, a distraught mother summons the man to help her daughter, who appears to be in some sort of trance. The Guy doesn't cast out demons with phrases in Latin — or any other language — but what happens does appear to be an exorcism. Later, the Guy shows the Girl how to deflect another threat, with a simple gesture that recalls a crucial scene in Andrei Tarkovsky's Nostalghia, a different sort of mystical film.

That 1983 movie, along with Carlos Reygadas's 2007 release Silent Light, are among the recent precedents for Dumont's work. But the director seems more in sync with such earlier predecessors as Robert Bresson and Carl Theodor Dreyer.

The latter's 1955 film Ordet prefigures Hors Satan's last act, in which some kind of supernatural force triumphs over mortality. This concluding development is not rationally plausible. It just has to be taken on faith — not faith in Jesus or Satan, but in the singular vision of Bruno Dumont.