Accessibility links
On Religion, Some Young People Show Both Doubt And Respect NPR's David Greene talks with a group of young adults who've struggled with the role of faith and religion in their lives. They do not speak of emptiness without religion, but recognize that it fills needs. They talk of having respect for religion, but say that it's not something they identify with now. 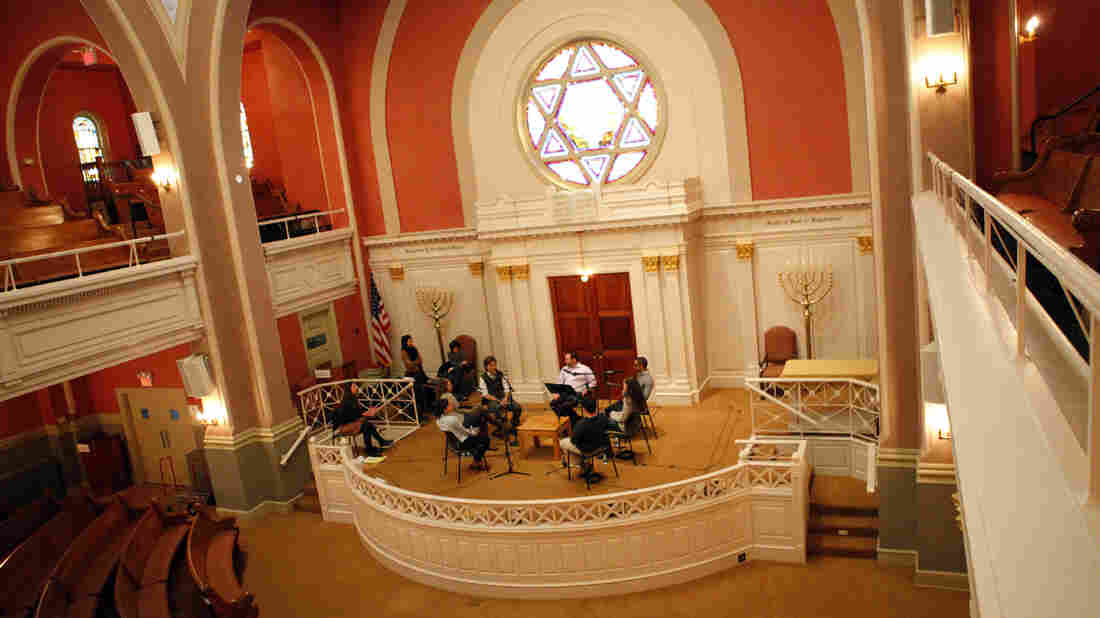 NPR's David Greene leads a discussion about religion with a group of young adults at the Sixth & I Historic Synagogue in Washington, D.C. Coburn Dukehart/NPR hide caption 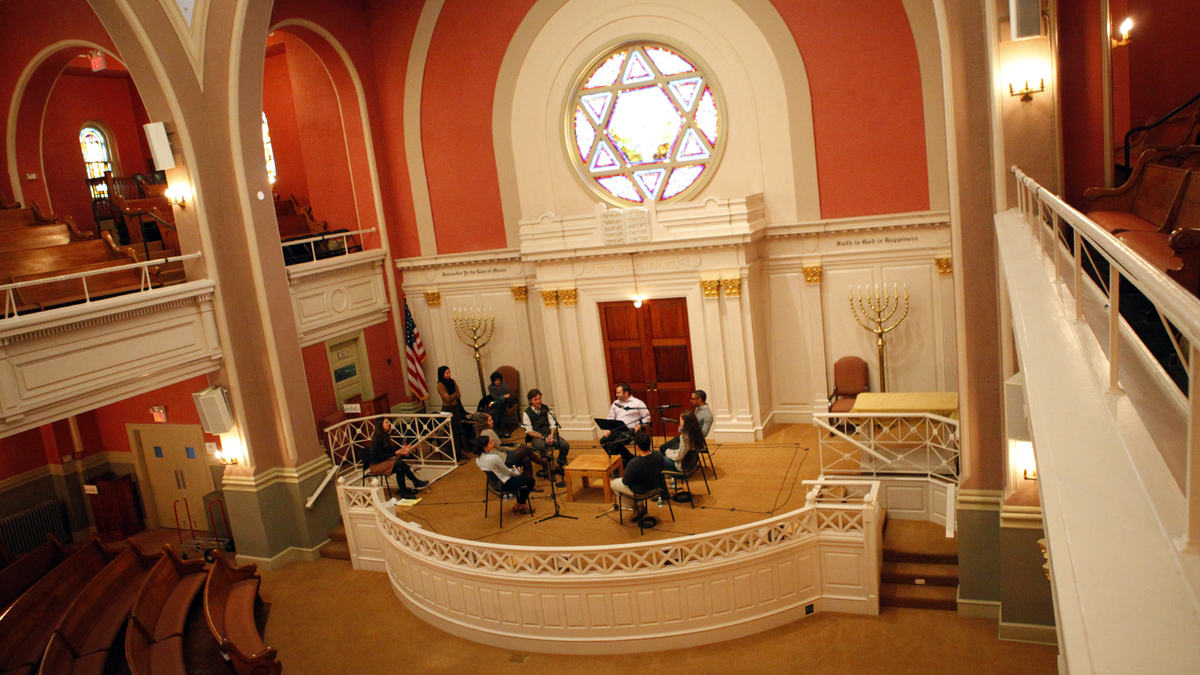 NPR's David Greene leads a discussion about religion with a group of young adults at the Sixth & I Historic Synagogue in Washington, D.C.

This is the second of a two-part discussion. Read Part 1.

A third of young adults in this country say they don't identify with any organized religion. NPR's David Greene wanted to understand why, so he met with a group of men and women in their 20s and 30s, all of whom have struggled with the role of faith and religion in their lives.

During their conversation, no one in the group speaks of having feelings of emptiness without religion, but some of them feel conflicted and all recognize that religion fills certain needs. They also talk about having respect for religion but feeling like it's not something they can identify with right now.

Melissa Adelman, was raised Catholic but doesn't call herself that anymore

"Moving away from Catholicism for me was a loss, a negative thing, a rejection of a set of beliefs. But at the same time, it's not like you move away from religion and have nothing or have this emptiness where you feel like, 'Oh, geez, I wish that I believed in something because now I have this negative space in my life.' I think you can fill it with lots of really good things.

Kyle Simpson, 27, found Christianity as a teenager. He's drifted away from religion, but he's had moments of doubt.

"Last year when I turned 26, I had my mini-existential crisis when I realized, 'Oh, my gosh, what's going to happen when I die? Am I just going to end up in the ground, and everything I've worked for, all my memories are for naught?' I still have that feeling every once in a while in the stereotypical moments when you're sitting alone in the dark. But I don't know if that's emptiness. 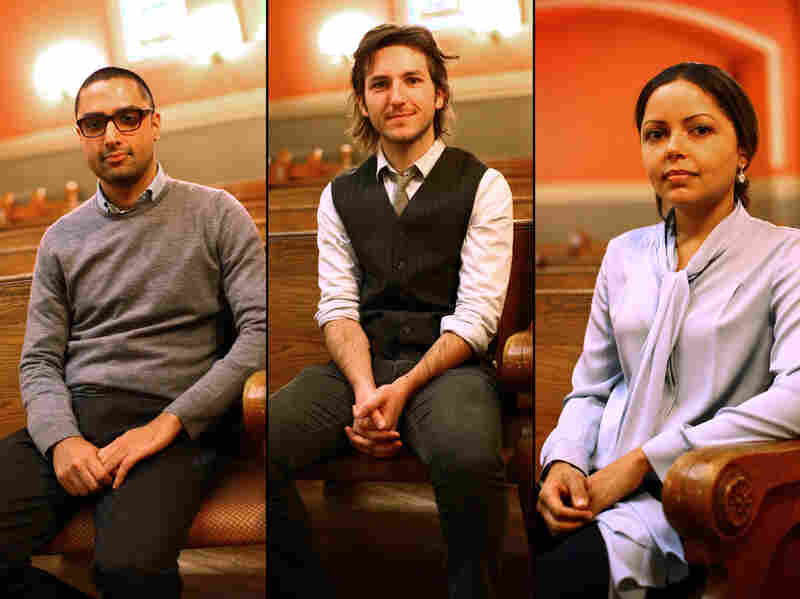 Yusuf Ahmad (from left), Kyle Simpson and Melissa Adelman participated in the discussion about religion with NPR's David Greene at the Sixth & I Historic Synagogue in Washington, D.C. Coburn Dukehart/NPR hide caption 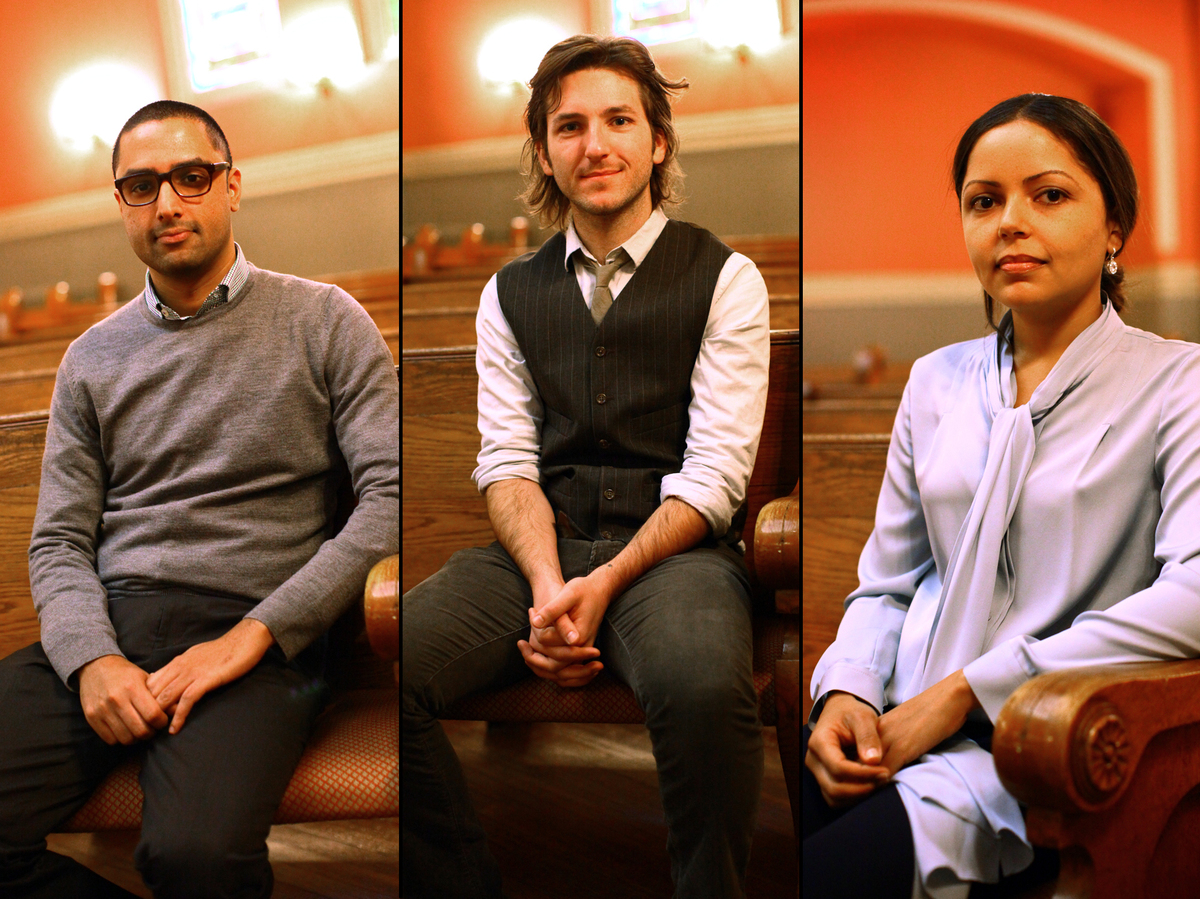 Yusuf Ahmad (from left), Kyle Simpson and Melissa Adelman participated in the discussion about religion with NPR's David Greene at the Sixth & I Historic Synagogue in Washington, D.C.

"For me, it's not about the beliefs that I wish I had. ... I'm comfortable with the place I've come to. I do seek that sense of community [religion offers]. That's probably the biggest thing for me — that tradition and community and support networks. That's what I would look for."

Rigoberto Perez, 30, an Iraq War veteran who was raised as a Seventh-day Adventist

Lizz Reeves, 23, raised by a Jewish mother and a Christian father. She's felt unwelcome at church because of her spiritual doubts and her views on social issues, but she is also looking for that sense of belonging that religion can provide.

"I still feel like I would benefit from that community, and I still, I think, struggle feeling like I cannot be a member of it. And so I think if I found a religious community that made me feel accepted for who I am that I would be very open to pursuing that."

"Growing up I used to do something really silly. Every day at 11:11 I'd make some sort of wish. Looking back on it, it was prayer, is what it was. ... I've had some weird superstitions [with the number 11]. I never would have admitted that I was praying at the time, I don't think, because I didn't feel comfortable with the idea that it was something religious; but looking back on it, that's certainly what it was. And I will occasionally catch myself at 11:11 doing that again. It is some sort of prayer, but I think it's more of challenging myself to do something or think about something than it is prayer in the most traditional of ways."

"I do something fairly similar. I grew up with prayer — speaking to yourself and not expecting a response. Some people may call it prayer, but I do carry internal dialogues very similar — 'Please let me work through this.' 'Give me more strength to deal with this.' Or 'Try and work through how I can effect a change in that particular circumstance.' Some people may consider it prayer — I don't consider it that because I'm finding it within myself; but others may."

"Not on a regular basis, but I do. I found that it's important to me to be thankful and to be more cognizant of the good things that happen in life. And so when really awesome things happen, I try to remember to take the time to feel the gratitude that I have for that. And so for me, I think that's my sense of prayer.

"The traditional prayer that I did as a child growing up was every night to get down on my knees and ask God to take care of the people that I cared about, and to make bad things go away and make good things happen. And I think this version of it for me is just much more in accord with my set of moral values."

"I do and I don't know what to make of it, because I feel like a hypocrite. But I only do it when I'm at my most scared or my most fearful ... and my most vulnerable. I don't know what to do with that because it really does not align with anything that I've said all day today, yet I still find myself doing that."