Accessibility links
Movie Review - 'LUV' - An Ex-Con Hero With Feet Of Clay Baltimore's criminal underworld is the backdrop for a coming-of-age drama about an 11-year-old and the uncle he idolizes. Critic Joel Arnold says solid performances in the central roles shore up a plot that sometimes strains credulity.

'LUV': An Ex-Con Hero With Feet Of Clay

'LUV': An Ex-Con Hero With Feet Of Clay 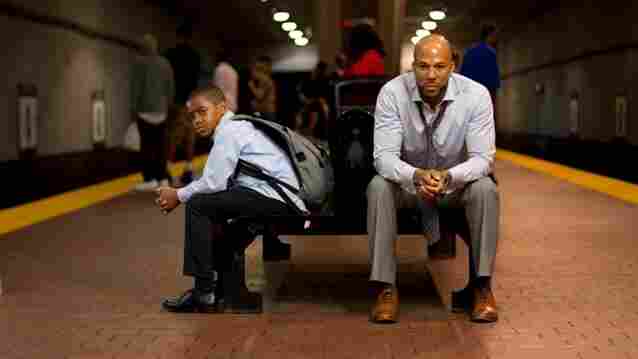 In LUV, Woody (Michael Rainey Jr.) spends a single day tagging along with his ex-convict uncle, Vincent (Common) — long enough for a lifetime's worth of lessons. Indomina Releasing hide caption

'Every Man Need To Know How To Drive'

Watch A Clip From 'LUV'- 'You Still Can't Crack A Crab'

'You Still Can't Crack A Crab'

Few films trying to capture a child's experience of an adult world manage to nail the details. In real life, kids aren't typically the precocious sorts espousing wisdom beyond their years — kids fidget, they ask questions, they get scared. They act like kids.

So it's nice that, despite some cliched rhythms, the flawed-ex-con-makes-good drama LUV gets the details of childhood-cut-short heartbreakingly right. Writer-director Sheldon Candis, drawing on his own childhood relationship with his Baltimore drug dealer uncle, crafts a poignant and believable relationship between 11-year-old Woody (Michael Rainey Jr.) and the man he idolizes, his Uncle Vincent (Common).

Woody is a bright, inquisitive kid who has already dealt with an absent father and a mother in rehab; when Vincent comes to stay with Woody and his grandmother after a stint in prison, the kid responds to his uncle's charisma quickly.

Set in a single day, LUV follows Woody as he tags along with Vincent, who's taking the necessary steps to rebuild his life on the straight and narrow. He has himself a crisp new suit, a solid business plan for a waterfront crab shack, and an easygoing nature that charms nearly everyone and only rarely betrays the desperation beneath.

Skipping school to shadow his uncle has its perks — Vincent puts Woody in a tailor-made suit and makes it his mission to dispense the lessons every man should learn, teaching him to drive and even how to shoot a gun. At the same time, Vincent glosses over his own failings when Woody puzzles at why Vincent still steals and lies. He has to go wrong before he can go right, Vincent reassures Woody — and himself — as cracks begin to form in Woody's rose-colored vision of his role model.

Unable to get a loan for his restaurant as himself, Vincent reconnects with Cofield (Charles S. Dutton), an avuncular contact from the old days who hooks him up with a fake ID and a warning: Not everyone is glad he's out. Vincent served only eight years of a 20-year sentence, and his former mentor and boss Mr. Fish (Dennis Haysbert) is suspicious, especially with a couple of detectives (Michael K. Williams and Russell Hornsby) on Vincent's tail. When dealing with the vengeful Mr. Fish turns out to be the only way of getting money and his reputation cleared, Vincent obliges — and takes Woody as backup.

In the hands of another director, Vincent's decision to put his nephew in harm's way would only be appalling, but Candis draws a sense of damaged innocence and willingness to trust from Common that puts him closer to his nephew than to the other drug dealers and murderers. Betrayed by the people he once considered family, Vincent is truly alone, save for Woody, who also displays unexpected character when he is forced into a deal gone bad. "You never let them see fear," Vincent sternly tells Woody, but it's in the moments when Vincent is vulnerable with his nephew that the two form an honest connection.

A messy third act backtracks on some of the film's finer, even revelatory character moments from Common and Rainey, but the attention to detail remains. While Vincent makes a deal, Woody is told to go off and wait, and Candis' observant camera picks up Woody trying an oyster for the first time — he makes a face and spits it out. Even during the lead-up to the foreseeable final confrontation, Candis pauses while Vincent patiently shows Woody how to properly crack and eat a crab. The camera cuts deliberately to a steel-eyed Fish, across the table, and back to Vincent staring him down, the difference between a mentor and a manipulator clear.

Saved from its predictable plotline by a strong cast and a central relationship written and performed with sensitivity, LUV reveals the stakes of trusting in a role model and the costs when that person turns out to be human.