Accessibility links
Seattle High School's Teachers Toss District's Test The teachers say the test, which evaluates their performance as well as the students', is a waste of time. The district is planning review of the test's effectiveness but still expects that it will be administered. As protests against standardized tests percolate nationwide, Seattle may cause a greater ripple effect. 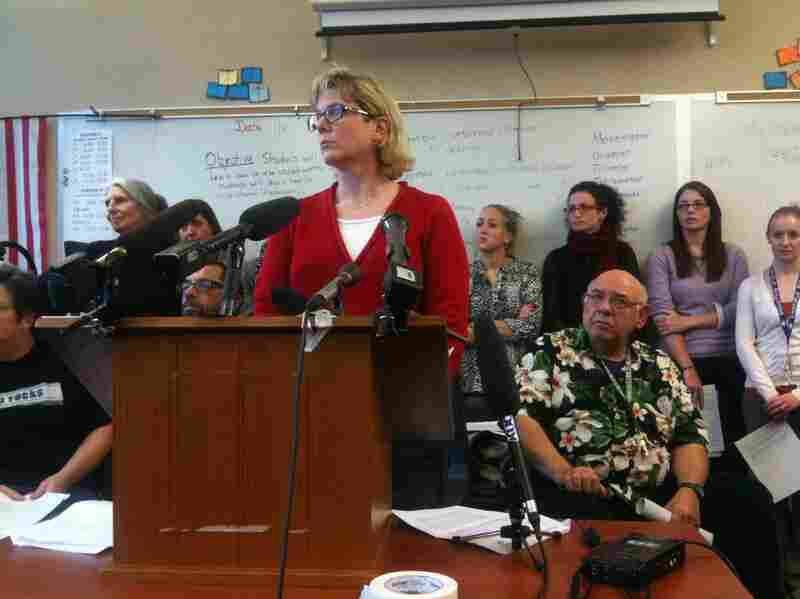 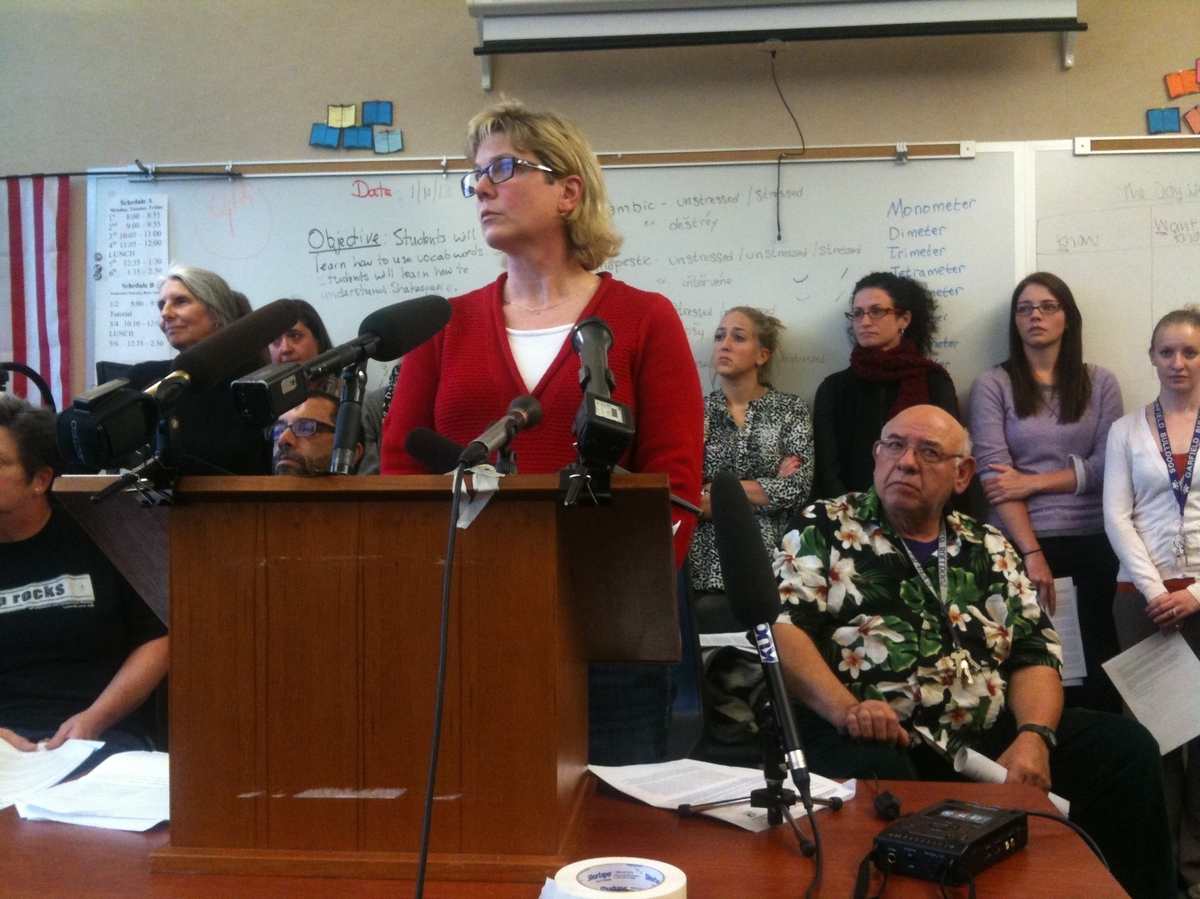 Garfield High School's academic dean and testing coordinator, Kris McBride, at a news conference announcing the teachers' boycott of the MAP test in Seattle on Jan. 10.

An entire school of teachers in Seattle is refusing to give students a standardized test that's required by the district. The teachers say the test is useless and wastes valuable instructional time.

Meanwhile, individual teacher protests of standardized tests are popping up nationwide, and the Seattle case may make bigger waves.

Students in Seattle Public Schools take a test called the Measures of Academic Progress, or MAP, up to three times a year, from kindergarten through at least ninth grade. The school district requires the test to measure how well students are doing in reading and math — in addition to annual standardized tests required by the state.

The MAP test is used as part of the teacher-evaluation process, and it's supposed to help teachers gauge students' progress.

"We've lost a whole lot of class time. I don't know what the test was about, and I just see no use for it at all," says Kit McCormick, who teaches English at Garfield High School.

McCormick says teachers are never allowed to see the test, so she has no idea how to interpret her students' scores.

"So I'm not going to do it. But I'd be happy to have my students evaluated in a way that would be meaningful for both them and me," she says.

Instead of this kind of high-stakes testing, teachers at Garfield propose that student learning be judged by portfolios of their work.

The school's academic dean, Kris McBride, was supposed to administer the test this week. Instead, she's standing behind the teachers. McBride says a major problem with the test is that it doesn't seem to align with district or state curricula.

"In fact, our Algebra 1 students go in and sit in front of a computer and take this math test. It's filled with geometry; it's filled with probability and statistics and other things that aren't a part of the curriculum at all," she says.

He says the MAP test's frequency is useful in making sure students are learning what they should be but has invited teachers to take part in a formal district review of its effectiveness. That still doesn't let them off the hook from administering the test, though.

"In the meantime, they have duties they're supposed to complete, making sure that this assessment is given," he says.

Banda says instead of boycotting the MAP test, teachers should work with the district to find solutions to their concerns.

In recent years, individual teachers around the country have refused to give standardized tests, says New York University education professor Diane Ravitch. A critic of the nationwide trend of high-stakes standardized testing, Ravitch says this move by entire school of teachers is unusually gutsy.

"No one likes what's going on, but no one has really found a mechanism to stand up and say, 'This is wrong,' " she says. "So I think this is incredibly encouraging, too, and I am sure that they will be applauded by teachers around the country. They may even have a ripple effect on other schools."

That's already happening in Seattle. Now, a group of elementary teachers at another school there says it will boycott the MAP test, too.

"I don't like any standardized tests, but I feel like some may be necessary," says 16-year-old Alicia Butler, a junior at Garfield.

She says she's OK with taking the state tests to graduate, or the SATs to get into college. But she says students don't take the MAP test seriously, and that could hurt good teachers.

"Since people are aware that we don't need it to graduate, they'll just start clicking on things," she says. "A lot of these teachers here are good, so they'll get lower evaluations, and it's not fair."

The school district hasn't said what it will do to any teacher who fails to give students the MAP test. The superintendent has given them until Feb. 22 to comply.