Accessibility links
U.S., Iran Running Low On Options Over Nuclear Program The latest round of talks between international inspectors and Iran showed little progress. More discussions are planned, but 2013 may be the year that the U.S. will decide whether to take military action against Iran. 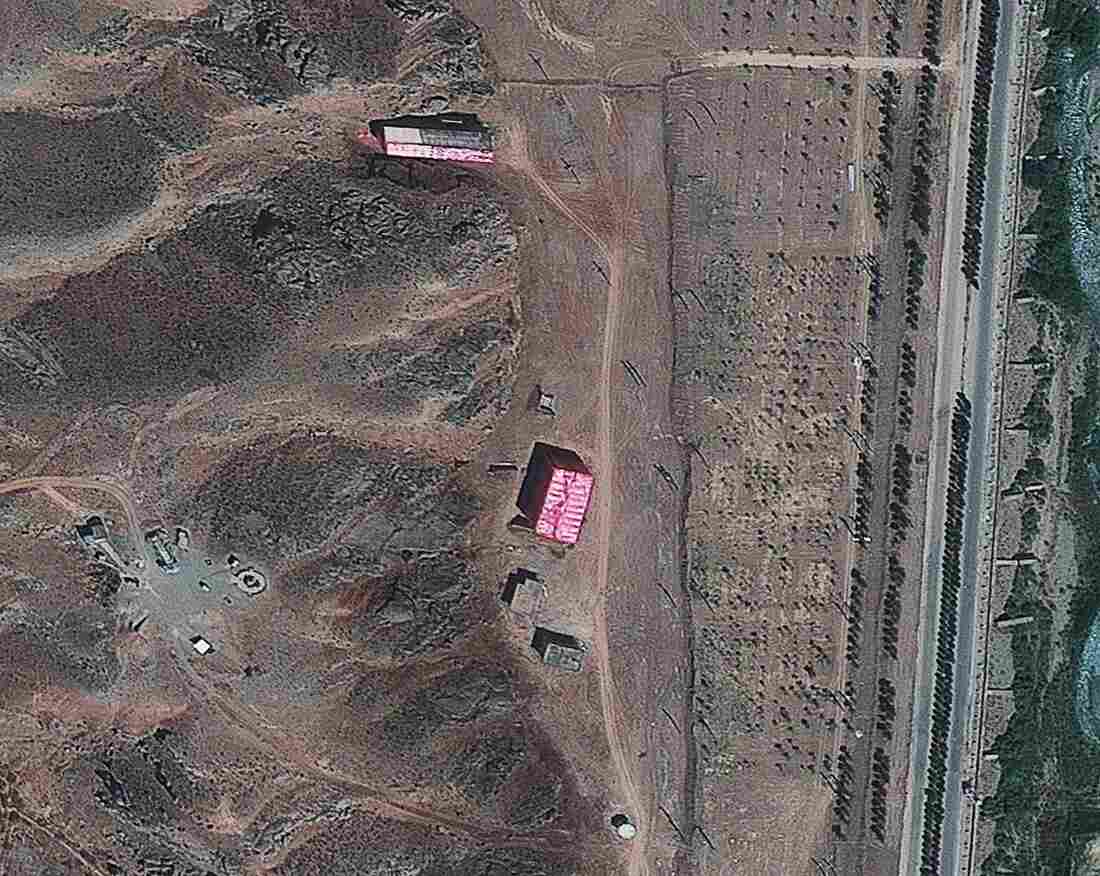 A photo from Aug. 15, 2012, supplied by the Institute for Science and International Security, shows buildings at the Parchin military base south of Tehran, Iran, shrouded in pink tarps. It's believed to be an effort to stop the U.N nuclear agency from monitoring the site, which is suspected of being used for secret work on atomic weapons. ISIS/AP hide caption 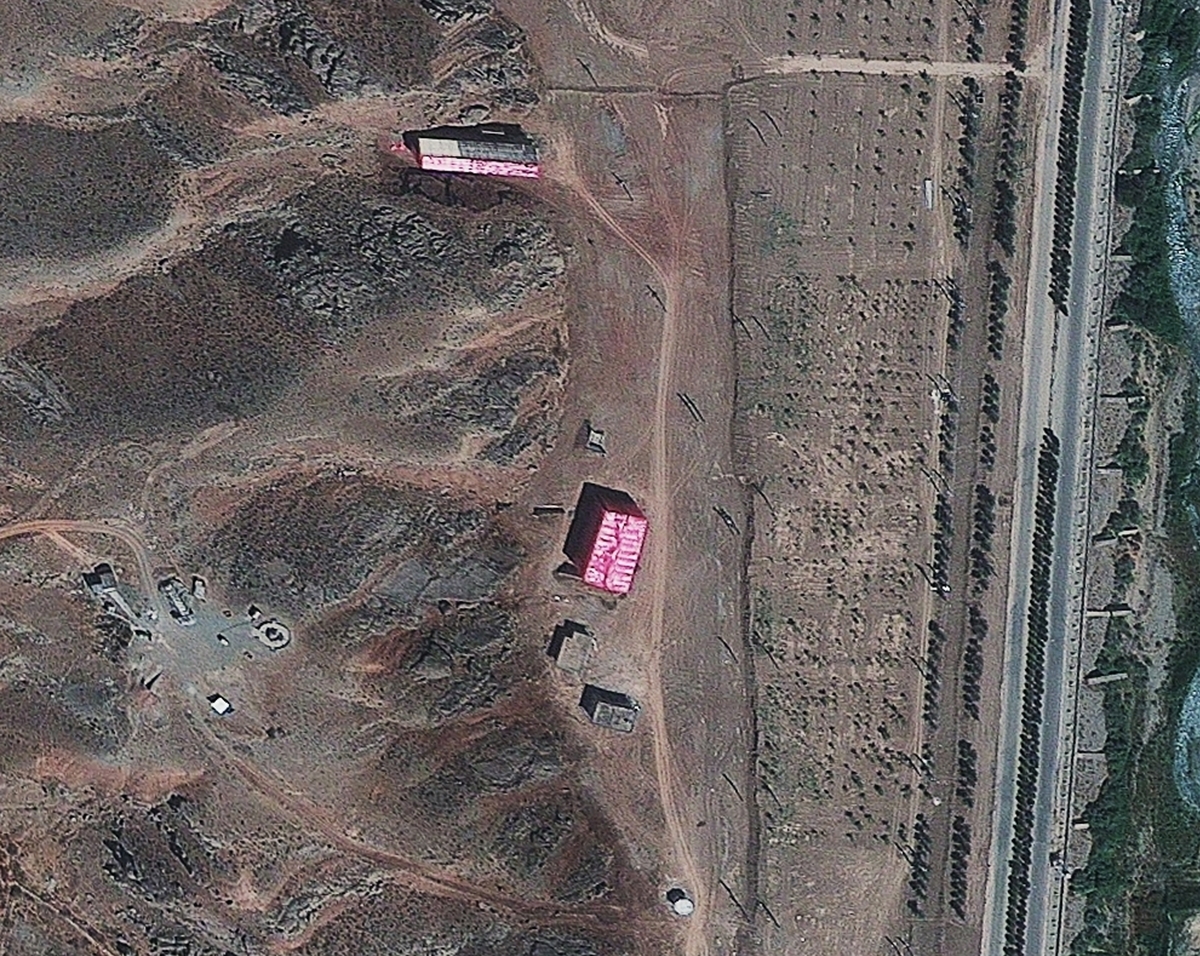 A photo from Aug. 15, 2012, supplied by the Institute for Science and International Security, shows buildings at the Parchin military base south of Tehran, Iran, shrouded in pink tarps. It's believed to be an effort to stop the U.N nuclear agency from monitoring the site, which is suspected of being used for secret work on atomic weapons.

With time running out on efforts to monitor Iran's nuclear program, 2013 could well be the year when the United States must decide whether to take military action to block Iran from acquiring a nuclear weapon.

Inspectors from the International Atomic Energy Agency were back in Tehran this week to review Iran's nuclear activities, and once again they came home with little to show for their efforts. The IAEA wants to verify that Iran does not intend to build a nuclear weapon, but the authorities in Tehran have consistently refused to provide inspectors with the access they need to fulfill their mission.

"Differences remain," IAEA Deputy Director General Herman Nackaerts told reporters upon his return to Vienna on Friday morning. "We could not ... resolve the outstanding issues regarding possible military dimensions of Iran's nuclear program."

The IAEA team could not visit the Parchin military site just outside Tehran, where Iran is suspected of having carried out explosives research.

Nackaerts said his team would return to the Iranian capital on Feb. 12 for another round of talks, but experts say the window of opportunity during which the United States or other countries could intervene to block an Iranian bomb is shrinking.

For Now, Enough Time To Intervene

U.S. intelligence agencies say it's not clear whether Iran intends to develop a nuclear weapon. A clear sign would be a move by Iran to begin enriching uranium to the level of purity necessary for a bomb.

So far, the Iranians have not crossed that line. U.S. officials believe it will be evident when they do — the IAEA has cameras installed at most of Iran's enrichment facilities — and Washington will have an opportunity to intervene, perhaps with military strikes on Iran's nuclear sites, as President Obama has implicitly threatened.

David Albright is president of the Institute for Science and International Security and a former IAEA collaborator.

"Once they decide, 'OK, we're going to start making weapon-grade uranium,' [it's still] before they have enough for a bomb," says Albright. "Even when you have 13,000 centrifuges, it just takes time to make that material. We think in the present environment the president would know in time to take military action."

The key question, however, is whether the "environment" is changing in Iran.

Foreign governments worry that additional uranium enrichment may be taking place outside international monitoring at an underground facility at Fordow, near the city of Qom.

Plus, the Iranians are building more and more centrifuges, which are used to enrich uranium. It would not take the Iranians as much time now to produce enough highly enriched uranium for a bomb as it would have taken them a year or two ago.

"There is a worry that Iran will reach a point of [enrichment] capability where they will be able to break out so quickly that the IAEA may not be able to sound a warning in time to take preventive action," says Albright.

In that case, the Iranians would be able to suddenly switch to weapons-grade uranium production and then produce enough to make a bomb before the United States and other countries have time to react.

A report released this week by Albright and four other experts estimates that "break out" deadline as "mid-2014."

If that timeline is right, the United States and its allies have only about a year and a half before they will have no opportunity to block Iran from building a bomb, should it decide to do so.

The hope is that in the meantime, international sanctions imposed on Iran will cause such pain to the country that the Iranian government will agree to suspend some of their enrichment activity. Currently, the Iranians are enriching uranium to the level of 3.5 percent purity. They have also enriched and stockpiled some uranium to the 20 percent level, which is below weapons-grade but still considered unacceptable by Western governments.

Reza Marashi, research director at the National Iranian American Council, says a deal between Iran and the international community should be possible.

"We've seen key factions inside Iran focus their bottom line on enrichment on Iranian soil capped at the 3.5 percent level," Marashi says. "Beyond that, whether it's their stockpile of 20 percent enriched uranium, enriching to the 20 percent level, their underground nuclear facility at Fordow, those things can all be negotiated — but for the right price."

The price would presumably be at least a partial end to the sanctions.

But successful negotiations require trust. Marashi says some Iranians are convinced that hard-liners in the U.S. do not actually want a deal and would settle instead only for an end to what they consider a repressive regime in Tehran.

"That's the overarching concern of the Iranian government," Marashi says, "that the policy of the United States is regime change. There are key officials in the regime that have thought that since day one after the 1979 revolution. Disproving that theory in their mind is a herculean task."

If the Iranians think the United States is just out to smash their government, they would have little reason to give up the option of building a nuclear weapon and negotiate instead. Albright says the United States and Western governments need to make clear their goal is not regime change.

"The threat of military strikes [should be] that if you build the bomb you will get struck militarily," Albright says. "It's not that [you will get struck] if you have 10,000 more centrifuges, or if we don't like what you've done to part of your population."

There was scant progress on negotiations with Iran during the U.S. presidential campaign, when President Obama had to worry about not appearing tough. And in June, Iran is set to have a presidential election of its own.

Marashi says "politics" can get in the way of progress, on both the U.S. and Iranian sides.

"When you have over three decades of not talking, when you have over three decades of politicians in both Washington and Tehran making careers out of proving how nasty they can be to the other side, it gets very difficult for leaders, both in a democracy like ours and in an authoritarian regime like theirs, to be willing to take risks for peace," Marashi says. "It's much easier to escalate the conflict."

What's worrisome, Marashi says, is that both sides are now running out of escalation options: "That is the reason you hear so many analysts say 2013 may be the make-or-break year when it comes to Iran."