Accessibility links
Interview: Jean Sprackland, Poet I "Poetry By Heart" Contest Poetry By Heart is a new program in which students memorize two of 130 poems and recite them in a contest. Poet Jean Sprackland, who helped compile the list, says memorizing a poem makes it "something that lives with you forever." 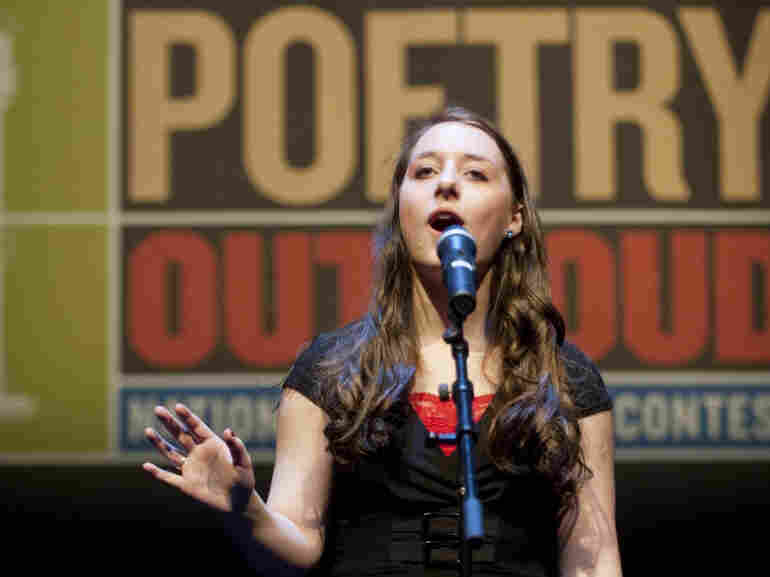 Emily Musette Hays performs in the 2012 Poetry Out Loud finals in Washington, D.C. The U.S. competition served as a model for the U.K.'s Poetry By Heart contest. James Kegley/The Poetry Foundation hide caption 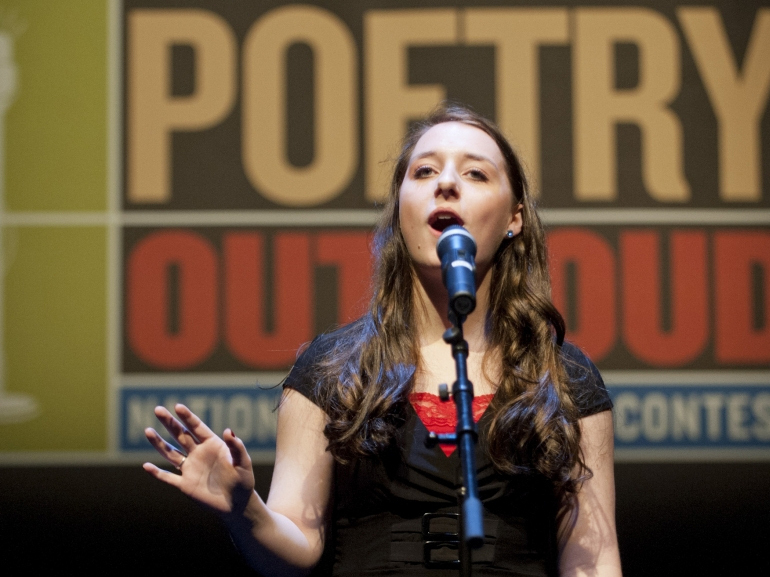 Emily Musette Hays performs in the 2012 Poetry Out Loud finals in Washington, D.C. The U.S. competition served as a model for the U.K.'s Poetry By Heart contest.

When the Internet offers a superabundance of material to read, watch, listen to and play, it's easy to skim over text and half-listen to broadcasts. But the British government is inviting schoolchildren to put down their cellphones, turn off their news feeds and spend a long time lingering over a poem — so long that they learn it by heart.

The United Kingdom's Department for Education is funding a nationwide poetry-reciting contest called Poetry By Heart, similar in structure to Poetry Out Loud in the U.S. and other poetry competitions in Canada and Ireland. The contest, at the county level, requires students to memorize two poems from a list of 130 choices and recite the poems by heart in a series of competitions.

English poet Jean Sprackland helped select the poems at the heart of the contest. She joins NPR's Scott Simon to discuss the pleasures of poetry memorization.

On learning by heart, not by rote

"Well, I suppose there's a great difference between learning by heart and the old-fashioned, rather dusty phrase 'learning by rote.' So there's a thought that if you learn by heart it means you take the poem right into yourself, it becomes part of you. And it remains with you, probably for the rest of your life. I think a lot of us can remember bits of poetry that we learned when we were very young. So it's something that lives with you forever."

On selecting the poems for Poetry By Heart

"We wanted to represent a great variety, a great richness of different sorts of poems in there. So it starts — the earliest poem is a 14th-century poem called 'Sir Gawain and the Green Knight,' by an anonymous poet, and then we go right up to the present day. ... We wanted to build a lot of variety into there so that young people could choose something to memorize and read aloud that appealed to them and that really was exciting and enjoyable for them to engage with. And we chose everything with that in mind, with memorizing and speaking aloud in mind. But as you can imagine, it was a terrifically difficult set of decisions to make because with anything like this there are always many, many more poems that you would like to include. And this is just for the first year, so we're hoping that the selection will grow and change as the competition continues in future years."

A Memorized Poem 'Lives With You Forever,' So Pick Carefully

On a poem she learned by heart

"One of the first poems that I began to learn was [John] Keat's 'Ode to a Nightingale,' which of course I know as an adult is one of the great English Romantic poems and is full of all this stuff about the ephemeral nature of love and youth and life. But I think probably as a 10- or 11-year-old I didn't know that at all. I just loved the sound of the words, and the sound of the words held meaning for me and the way the words tasted and felt in my mouth when I spoke them. So that's what I first loved about the poem, and then it's been a lifelong love affair. I've read the poem so many hundreds of times and remembered it and gone through it in my own head when there's nothing else that I need to be doing. So I think that's a good example, really, of how you can learn something very early in your life and it lives with you always."