Accessibility links
First Listen: Darkstar, 'News From Nowhere' Composed with luminous synths and melodic vocal lines, the U.K. trio's latest album is an unabashed venture into warped pop music. Its pace is uncharacteristically rapid, its chords buoyant, yet there remains an eerie quality to Darkstar's music. 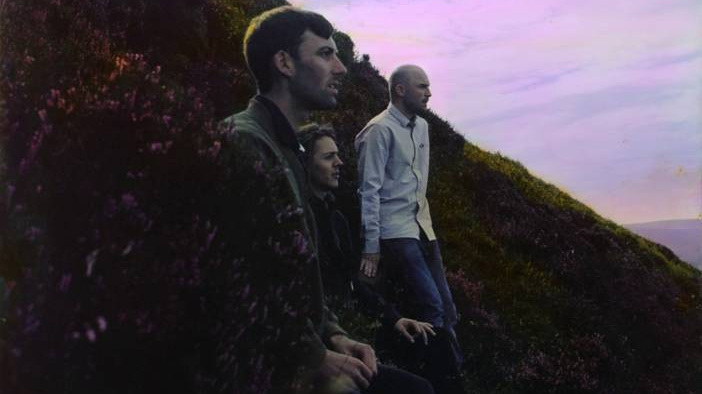 Like sand sifting through a pinhole, the first signal on Darkstar's News From Nowhere builds slowly into a sweetly psychedelic mound. "Light Body Clock Starter" opens the record by setting its tone: subtly textural, slightly queasy, pretty as a picture. Composed with luminous synths and melodic vocal lines, the U.K. trio's latest album is an unabashed venture into warped pop music.

Darkstar first broke out on the U.K. label Hyperdub, a label known for dark, melancholic, low-frequency music that isn't always danceable. The group's best-known single, "Aidy's Girl Is A Computer," fit into the dance-friendly side of Hyperdub's catalog. Driven by a British two-step rhythm, looped bell tones and a glitchy vocal, the cut had a soft-spoken effervescence that gave the group a solid reputation in dance-music circles. Then, Darkstar took a left turn. Its debut album, North, used dance beats as a backbone for melancholic pop, rather than as focal rhythms made to move a room. North was dark, brooding, introspective.

News From Nowhere offers a brighter take on synth-driven pop. Its pace is more rapid, its chords more buoyant. There's still an eerie quality to Darkstar's music: Ghostly chords waver in and out of tune, while reverb haunts many of the timbres here. But the weirdness of tracks like "Armonica" serves a cheerful vibe. Even cuts with slower ramp-up times and slower tempos work their way into blissful vocal breakdowns. "A Day's Pay For A Day's Work" starts with a pitchy piano chord and a somber vocal, then drops into a classic pop progression that'd work on a Beach Boys record.

The lyrics, like those on North, often meditate on gut-wrenching emotion, but this time they're set in warmer contexts. News From Nowhere was pulled out from the shady depths of North and thrust into the sun, but it's still flecked with uneasy shadows.