Accessibility links
The Presidential Oath: Not Always Perfect, But It Gets The Job Done By the time he is through with his inauguration on Monday, President Obama will have taken the presidential oath four times. In 2009, he had to do it twice after some stumbles between him and Chief Justice John Roberts. But as history shows us, his oath was not the first to suffer a few mishaps. 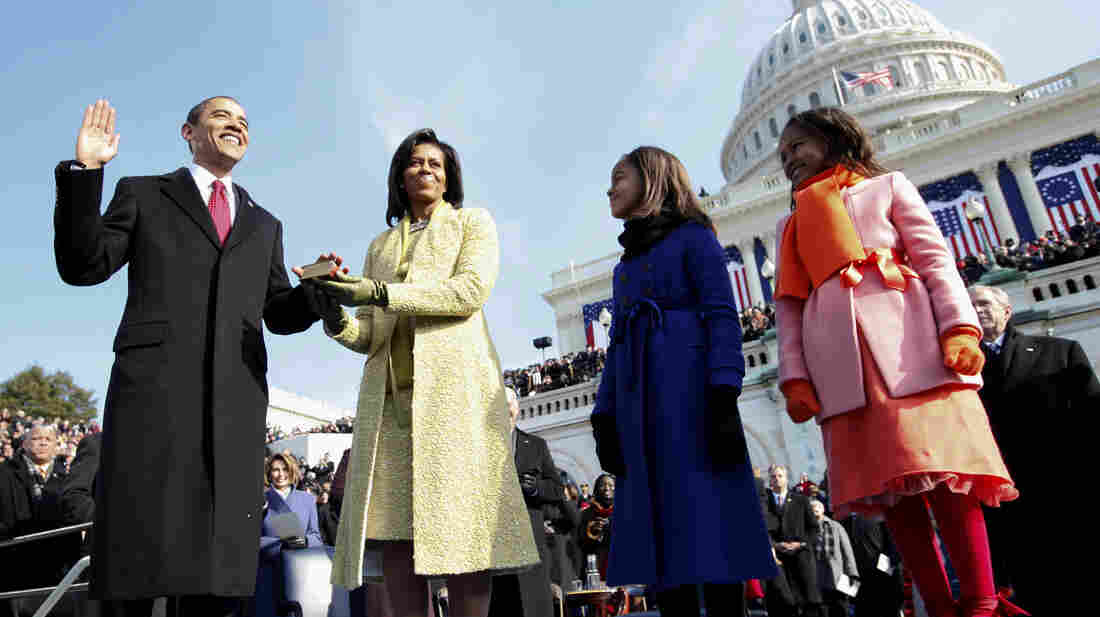 Barack Obama takes the oath of office beside his wife Michelle and daughters Sasha, right, and Malia, at the U.S. Capitol in Washington on Jan. 20, 2009. Chuck Kennedy/AP hide caption 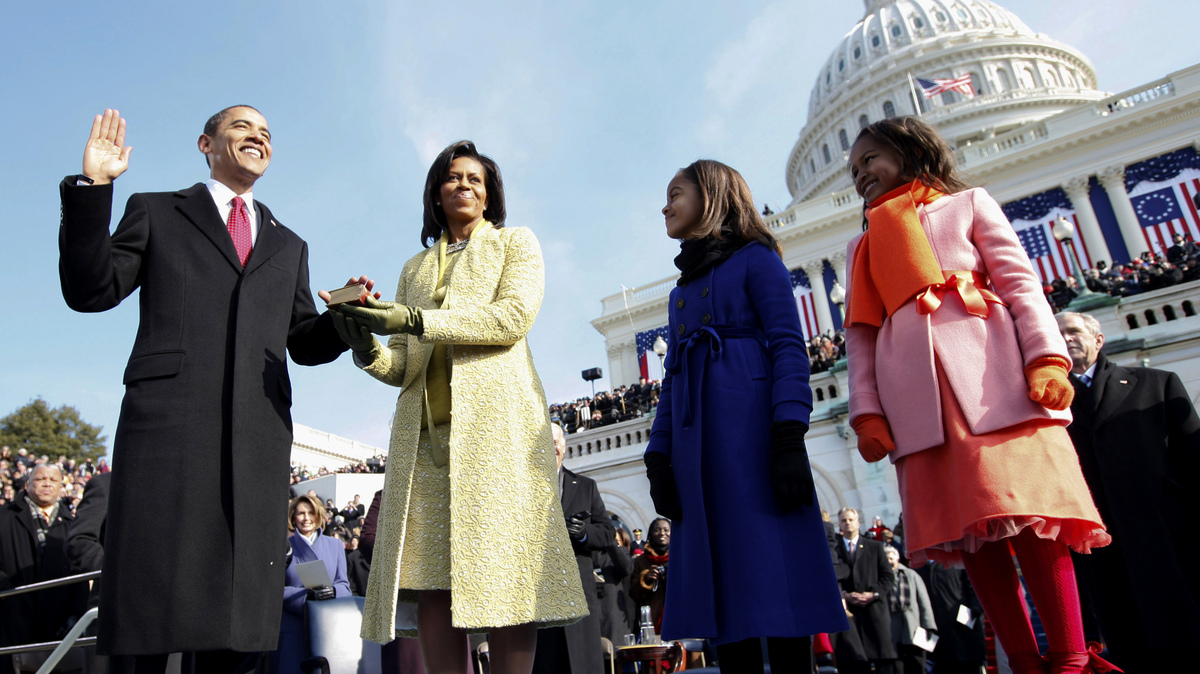 Barack Obama takes the oath of office beside his wife Michelle and daughters Sasha, right, and Malia, at the U.S. Capitol in Washington on Jan. 20, 2009.

Obama took the oath twice in 2009 because he and Chief Justice John Roberts messed it up a bit the first time and redid it a second time in private to quell any questions about Obama being president.

The president is taking the oath twice this time because technically, Inauguration Day falls on Sunday, Jan. 20, and the modern tradition has been that when that happens, the president takes a private oath on Sunday and does it again in public for the big ceremonial event on Monday.

It wasn't always like that. The first two presidents whose inauguration days fell on a Sunday waited until Monday to take the oath. The legal authority for doing that was none other than the founding father and great Chief Justice John Marshall.

In 1821, then-Secretary of State John Quincy Adams wrote to Marshall noting that the inauguration of President James Monroe that year would fall on a Sunday, a day of religious sensibility. Adams asked Marshall what they should do. The answer was, "Wait until Monday," according to Yale Law School professor Akhil Reed Amar. Marshall wrote back and said something like, "Well, usually we've waited until noon to do the inauguration, even though power transferred at midnight. If we can wait 12 hours, why not 36 hours?"

So Monroe was sworn in on a Monday, and so too was Zachary Taylor in 1849.

Rutherford Hayes was the first president to be sworn in privately, before the public event. But he did it on a Saturday. The rumor is that he took the oath early to forestall any chance that his election opponent would challenge the disputed outcome of the balloting.

The next president to be sworn in privately was Woodrow Wilson, on a Sunday. He allegedly feared leaving the country without a sitting president for a whole day at a time when the nation was on the brink of entering World War I.

After that, tradition seemed to take hold when Inauguration Day fell on a Sunday. Dwight Eisenhower was sworn in privately for his second term and then again on Monday at the public inauguration. Ronald Reagan also had a private ceremony on Sunday for his second term; and even though it was called a private ceremony, it was broadcast. Obama's Sunday ceremony will also be televised.

In fact, George Washington may not have said those words. He set the standard for future presidents in many matters. Even though he was a general, he wore civilian clothes. He took the oath on a Bible, and for a long time it was believed he said, "So help me God" at the end of the oath. That, however, is not so clear any more, as Amar observes.

"In my last book in 2005, I actually suggested that he did. I now think that I goofed," the Yale professor says.

The source for all the stories about Washington saying, "So help me God" was a biographer who claimed to have attended the inauguration at age 6 and to have heard Washington say those words. But none of the very detailed contemporaneous accounts of the inauguration mentioned the first president adding, "So help me God" to the oath spelled out in the Constitution, and the writer who popularized the notion decades later, Washington Irving, was a famous fabulist, and he was known for making things up.

Obama's first oath-taking ran into a snafu over pauses. Roberts wrote out the oath as he planned to administer it, marking the places where he intended to pause for Obama to repeat the words. He had the card emailed to the designated congressional staffer handling these matters. But as Jeffrey Toobin reports in his book, The Oath, the card never made it to Obama's people.

At the ceremony, things quickly went awry, with Obama interrupting where he thought the first pause would be, and the chief justice, who had memorized the oath but not brought a copy with him, becoming flustered, saying the words in the wrong order.

The ensuing blogosphere furor suggesting that Obama was not president provoked White House counsel Gregory Craig to call Roberts two days later and ask him to administer the oath a second time, in private. And so Roberts, on his way home from work, stopped at the White House on Jan. 22, 2009, to do just that.

"It was done flawlessly," Craig says, noting, "there's a videotape of it somewhere."

As it turns out, this was hardly the first time that the oath had been botched. In 1929, when Chief Justice William Howard Taft swore in Herbert Hoover, he substituted an important word in the oath, so that the president promised to "preserve, maintain and defend the Constitution," instead of using the words specified in the Constitution: "to preserve, protect and defend."

According to author Toobin, when the mistake was pointed out to Taft, he replied, "Before radio ... we messed it up even more than that."