Accessibility links
Urban Oases: Getting Lost in 'Invisible Cities' Marco Polo sits in the garden of Kublai Khan and weaves tales of spider cities, gold cities and dream cities. Author Eric Weiner explains why the best travel book he has ever read isn't about a real place. What's your favorite book about an imaginary journey? Tell us in the comments. 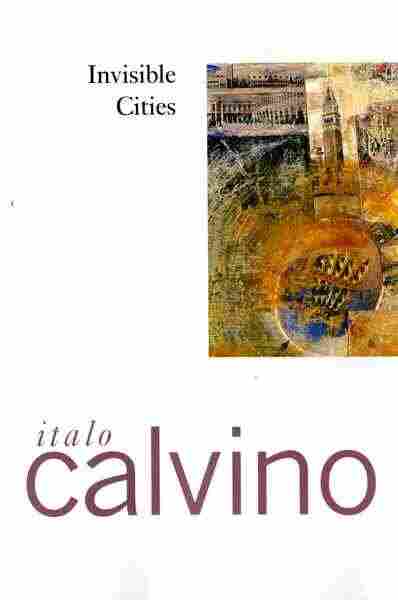 by Italo Calvino and William Weaver

Eric Weiner's latest book is Man Seeks God: My Flirtations with the Divine.

Italo Calvino's Invisible Cities might be labeled travelogue. It was, in fact, the traveler in me that first fell under its spell. The places Calvino describes, though, don't exist on any map. Technically, this is a novel, a work of fiction, but one without any storyline. The only characters are an aging Kublai Khan and a young-ish Marco Polo. They're sitting in a garden, where the Venetian explorer is regaling the Mongol ruler with tales of the cities he has seen journeying to the far reaches of Khan's vast empire. Each short chapter describes a different city, 55 in all.

These are fantastical, beguiling places, where things are never as they seem. There's Hypatia, a city of beautiful blue lagoons but where "crabs were biting the eyes of the suicides, stones tied around their necks"; Laudomia, the city of the unborn, whose inhabitants have constructed a parallel city for those yet to come; Octavia, the spider-web city, whose residents live suspended over an abyss, supported by a net they know won't last long; and Argia, a city with earth instead of air.

At some point, you realize that Calvino is not talking about cities at all, not in the way we normally think of the word. Calvino's cities — like all cities, really — are constructed not of steel and concrete but of ideas. Each city represents a thought experiment, or, as Polo tells Khan at one point, "You take delight not in a city's seven or seventy wonders but in the answer it gives to a question of yours."

The question that Calvino seems to be asking is a big one: How should we live?

Eric Weiner is a former NPR correspondent and the author of The Geography of Bliss: One Grump's Search for the Happiest Places in the World. Chuck Berman/Twelve Books hide caption

The inhabitants of Calvino's cities are a tortured lot, ensnared in various traps, largely of their own making. I'm not sure if Calvino intended this, but I find the book very Buddhist. The city dwellers are trapped in cycles of despair — a sort of urban samsara — failing to realize that they hold the keys to their particular prison. Beersheba, for instance, a city with a subterranean twin of pure gold, does not know that "its only moments of generous abandon are those when it becomes detached from itself, when it lets go, expands." Or Raissa, a city of sadness that nonetheless "contains a happy city unaware of its existence."

There's also something pleasantly disorienting about this book. It should come with a warning about operating heavy machines while under its influence. When I'm reading it (which I do often), I see the world a bit differently, at an angle.

This is a slim book, only 165 pages, but it's not the kind you devour in one sitting. I find myself pausing every two or three pages to process what I have just read. Not because Calvino's writing is difficult to penetrate, but simply because he packs so much into each sentence. There is so much there there. It's best, I think, to read Invisible Cities like a traveler — slowly, luxuriously, as if you have all the time in the world.

Calvino ends the description of one city, Tamara, with a warning: "You leave Tamara without having discovered it." So it is with Invisible Cities. I leave it, again and again, and yet never discover it — never really know it. That is precisely what keeps drawing me back to this strange and wonderful little book.

You Must Read This is produced and edited by NPR Books.