Accessibility links
Algerian Gas Plant Seizure May Mark New Stage In Al-Qaida Evolution America's chief terrorism concern used to be al-Qaida's core, led by Osama bin Laden. Then the group's affiliates, like its arm in Yemen, became the most serious threat. Now, analysts say, the Algerian attack by a group that had left al-Qaida's fold may be the latest iteration in terrorist threats. 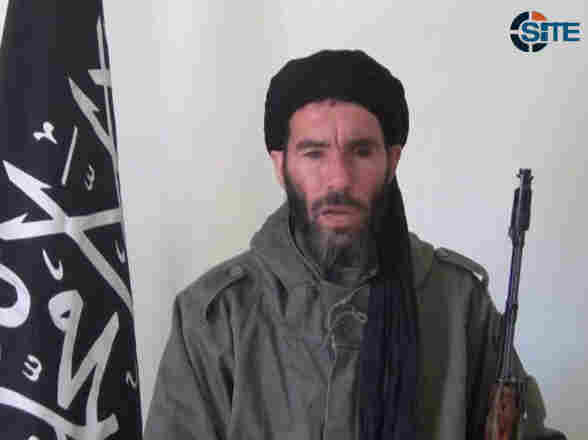 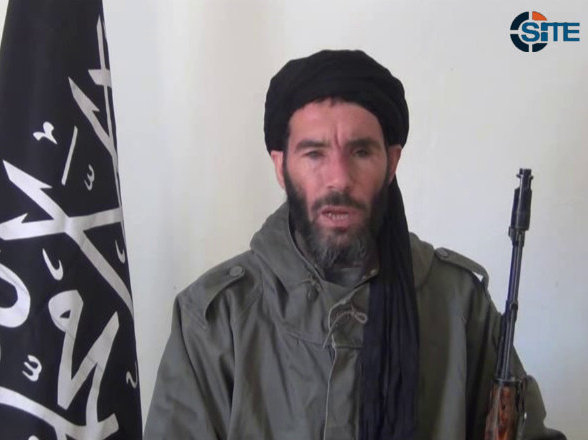 This image from video provided by the SITE Intel Group made available Jan. 17 purports to show militant militia leader Mokhtar Belmokhtar. He claimed responsibility in a video posted Monday for last week's deadly attack on a BP gas facility in Algeria.

The man who says he masterminded last week's attack on a BP-operated gas facility in Algeria claimed responsibility in a video.

"We are behind the blessed daring operation in Algeria," says Mokhtar Belmokhtar, a former member of al-Qaida's arm in North Africa. "Forty men from Muslim and Western countries took part in the operation," he continues. "We did it for al-Qaida."

The video is dated Jan. 17, a day after the hostage siege began. But it was only posted Monday on a website called Sahara Media, which often carries jihadi messages. The video contains all the familiar hallmarks of an al-Qaida propaganda film. Belmokhtar is standing in front of an Islamist black banner associated with al-Qaida, and he talks about the crusaders and exacting revenge against France and the United States.

Those signals aside, analysts say he is a different kind of terrorist than the average al-Qaida member. That's because he appears to be as motivated by criminality as he is by ideology.

"Belmokhtar's No. 1 goal is always been making money; he's an opportunist," says Rudy Atallah, a senior fellow at the Atlantic Council who used to advise the Office of the Secretary of Defense on counterterrorism efforts in Africa. "And he's gone off on his own ... he still has his own katiba, his own battalion with his own men. ... He's just making sure that everyone knows that he is still a viable threat out there."

"What you will be seeing in the future is ideologically aligned splinter groups that have the al-Qaida DNA in them but may be operating quite independently," says Juan Zarate, a senior adviser at the Center for Strategic and International Studies who used to track transnational crime at the Treasury Department. "I think what you will see and continue to see is a splintering and factionalization of the al-Qaida movement around the world, and it is going to grow more and more difficult to be able to put a pin on the map to determine which group is actually al-Qaida or not."

It appears that Belmokhtar is testing that new model. U.S. officials say since his split with AQIM he has made clear he wants to go around al-Qaida's local affiliates — and report only to the group's founding leaders, like Ayman al-Zawahiri. The change gives the core al-Qaida a new tool. Now it has people like Belmokhtar and its traditional affiliates to call upon.

What's more, this new wave of al-Qaida adherents is throwing up a smoke screen as to whether al-Qaida was directly involved in the Algeria attack or merely a bystander. If Belmokhtar was behind it, does that mean that al-Qaida wasn't?

In the end, analysts say the labels don't really matter: Whether it is Belmokhtar acting on his own or on behalf of al-Qaida, the end result is the same.