Accessibility links
'Insurgents' Hoped To Change Military From Within National security reporter Fred Kaplan's new book is called The Insurgents, but the insurgents of the title are actually American military intellectuals — including Gen. David Petraeus — determined to change the way the Army thinks about counterinsurgency operations. 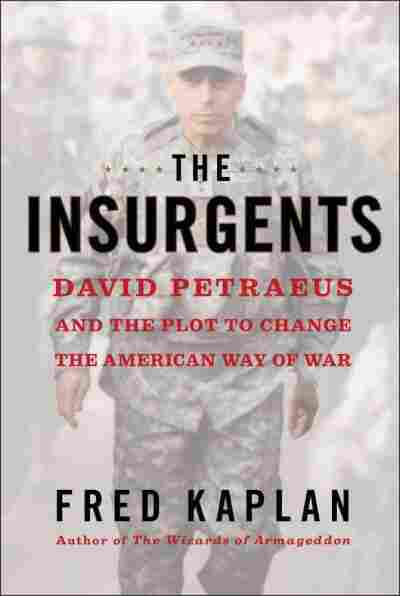 National security reporter Fred Kaplan was the first to publicly link Paula Broadwell to Gen. David Petraeus in last fall's affair scandal, but that's not the topic of his new book. In fact, it's barely an addendum. Instead, Kaplan focuses in depth on counterinsurgency — a cornerstone of Petraeus' legacy.

The book is called The Insurgents: David Petraeus and the Plot to Change the American Way of War. And that title is a play on words. The insurgents in this case are Americans: colonels and generals educated at West Point, Kaplan tells NPR's Renee Montagne. "I'm talking about a small band of intellectual officers within the Army, who rose within, determined to mount a revolution from inside the Army."

Before Petraeus arrived in Iraq in 2006, the Army had for decades thought of war as involving large, set-piece battles with tanks and planes, against major, well-defined foes.

"Conflicts against insurgents, terrorists, that sort of thing was officially called, in capital letters, Military Operations Other Than War," Kaplan says. "It wasn't even war, and yet, at the same time, people like David Petraeus ... they were going to El Salvador, to Somalia, to Bosnia, to Haiti, these places that sure felt like war to these people. But it wasn't recognized."

These officers, Petraeus and his colleagues, realized that the Army had to change, Kaplan says, but it wasn't going to change by itself. "And so they had to change it from within, and therefore they were the insurgents within the United States Army."

But not much came of this new way of thinking — until the war in Iraq. "Large organizations sometimes change when there's a catastrophe," Kaplan says, "and there was a catastrophe in Iraq. You know, we invaded with kind of a blitzkrieg dash up the desert, and then found ourselves being an occupying power and then facing an insurgency. The entire Joint Chiefs of Staff, they were against even calling it an insurgency, because that would mean you might have to develop counterinsurgency strategies, which would require a lot of troops staying on the ground for a long time, and they were not interested in that at all."

Kaplan says the plot to change the U.S. military from within really got going then, as the situation in Iraq began to provide some urgency. And he's adamant about describing it as a plot. "The people involved in it, they called themselves 'the cabal' or 'the West Point mafia,' " he says. And it all started with a conference held in Basin Harbor, Vt., by a scholar named Eliot Cohen, who had been to Iraq and seen the situation for himself. "He basically called up everybody who had written an interesting article about counterinsurgency in a military journal — there's about 30 people, and the pivotal thing about this meeting was that a lot of these people didn't know each other, they'd thought that they were out in the wilderness, writing this stuff by themselves, and they saw that, in fact, they formed a community."

Fred Kaplan writes the "War Stories" column in Slate. A former reporter for the Boston Globe, he was a co-recipient of a Pulitzer Prize in 1983. Robin Resch/Courtesy Simon & Schuster hide caption

Fred Kaplan writes the "War Stories" column in Slate. A former reporter for the Boston Globe, he was a co-recipient of a Pulitzer Prize in 1983.

At the same time that Cohen was holding his meeting, Petraeus was on his way back from Iraq to become the head of the Combined Arms Center at Fort Leavenworth in Kansas.

"He realized that the Combined Arms Center was potentially the intellectual center of the Army. They wrote doctrine. And Petraeus knew some of these people who were in the Basin Harbor group, and these people became the co-conspirators, if you will, in writing a new field manual on counterinsurgency," Kaplan says. "And by the time Petraeus went back to Iraq, in early 2007, all the pins were in place for him to apply the strategy that he'd been trying to work into the mainstream of the Army for 25 years."

That strategy, Kaplan continues, grew out of the insight that insurgencies stem from certain kinds of conditions. Successful insurgencies gain popular favor, and not always through fear — they sometimes step into the role of a government that isn't doing its job. "So the point of a counterinsurgency campaign is not just to kill and capture the enemy," he says. "It's also to infiltrate the community, to say, 'We are here to provide you security,' and also to reform the government."

And it's a strategy that can work, "when you can set up a relationship with the local powers, and you have common interests," Kaplan says, as with the surge in Iraq, which Petraeus described as designed to give the various factions some breathing room, some time to get their collective act together. "The problem was, as we now see, Prime Minister [Nouri al-]Maliki had no interest in getting his act together. So in the long run, the surge and all that worked tactically, but in terms of achieving strategic objectives, it didn't work, because what overrode the strategy was the interests of the ruling elites on the ground."

That problem was writ large when the strategies that had worked — at least partially — in Iraq began to be applied in Afghanistan. After Iraq, Kaplan says, Petraeus was viewed as a miracle worker. "And he was a very brilliant strategist and an angler, but he wasn't a miracle worker. A myth had built up around him," one that he himself had cultivated.

"He was sent to Afghanistan with the idea that, well, he worked miracles in Iraq, maybe he can work them in Afghanistan," Kaplan says. "By his own admission, he knew nothing about Afghanistan."

Petraeus was heavily influenced, he adds, by a book on counterinsurgency, written in English by French colonial officer David Galula. "There is a chapter in the book — and Petraeus read this book and reread it many times — a chapter called 'Conditions Favorable to an Insurgency,' and it listed several things where an insurgency would be very effective: a corrupt central government, a largely rural, illiterate population, a neighboring country that can serve as a sanctuary for an insurgency. You add up all these conditions, it's a dead ringer for Afghanistan. This thing was just never going to be susceptible to classic counterinsurgency techniques."

"Petraeus convinced a lot of people that we should give it a try," Kaplan continues. "President Obama gave it a try, for about 18 months, it didn't work, and so he cut back on the strategy, which is what we're seeing now."

So, strangely, many generals who denied that they were still fighting their last war ended up doing exactly that in Afghanistan. "That's the irony," Kaplan says. "They also said things like, 'counterinsurgencies are local wars, you have to adapt to each local condition,' but they just tried to apply the same very abstract principles, and it didn't work. ... History teaches us over and over again that sometimes, when you get intellectuals in positions of power, and especially once they have a triumph or two, the fall — when the fall comes — can be particularly brutal."

Read an excerpt of The Insurgents