Accessibility links
Backed By French Might, Malian Troops Retake Key Town Support is growing for the French-led operation in Mali to drive back Islamist militants intent on seizing the capital. French airstrikes and ground troops have helped government forces retake the strategic town of Diabaly in central Mali. 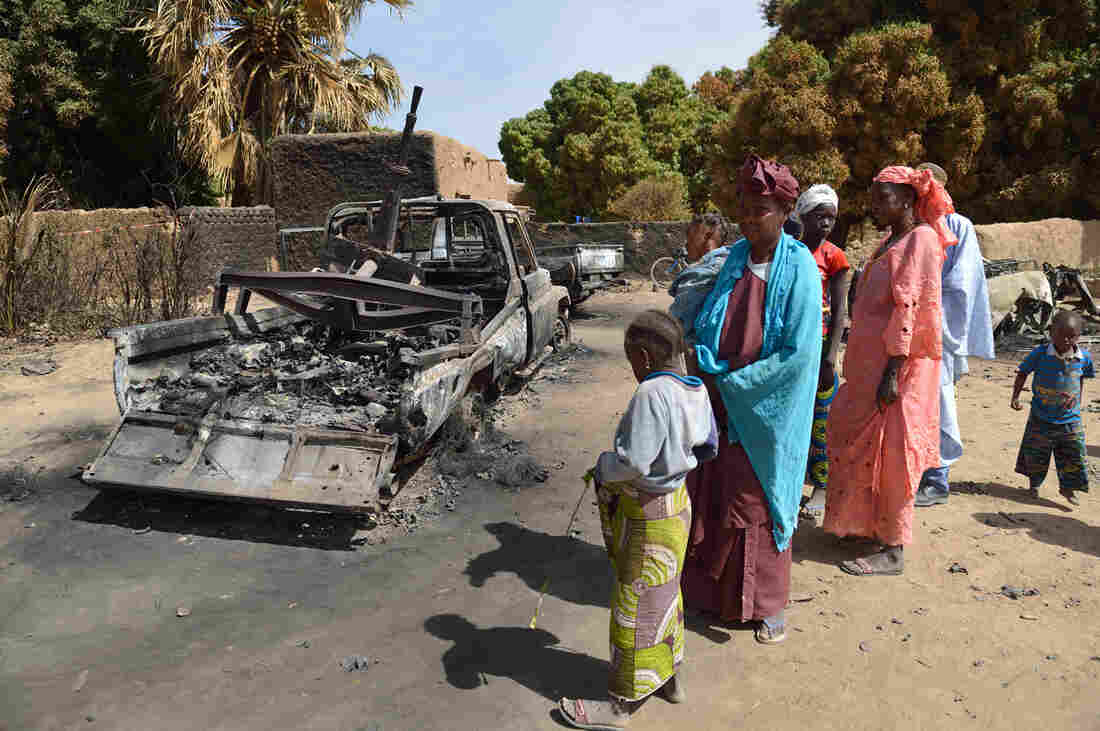 Malians gather around the remains of vehicles used by Islamist rebels that were destroyed by an earlier French airstrike, Jan. 23 in Diabaly, about 250 miles north of Bamako, Mali's capital. Eric Feferberg /AFP/Getty Images hide caption 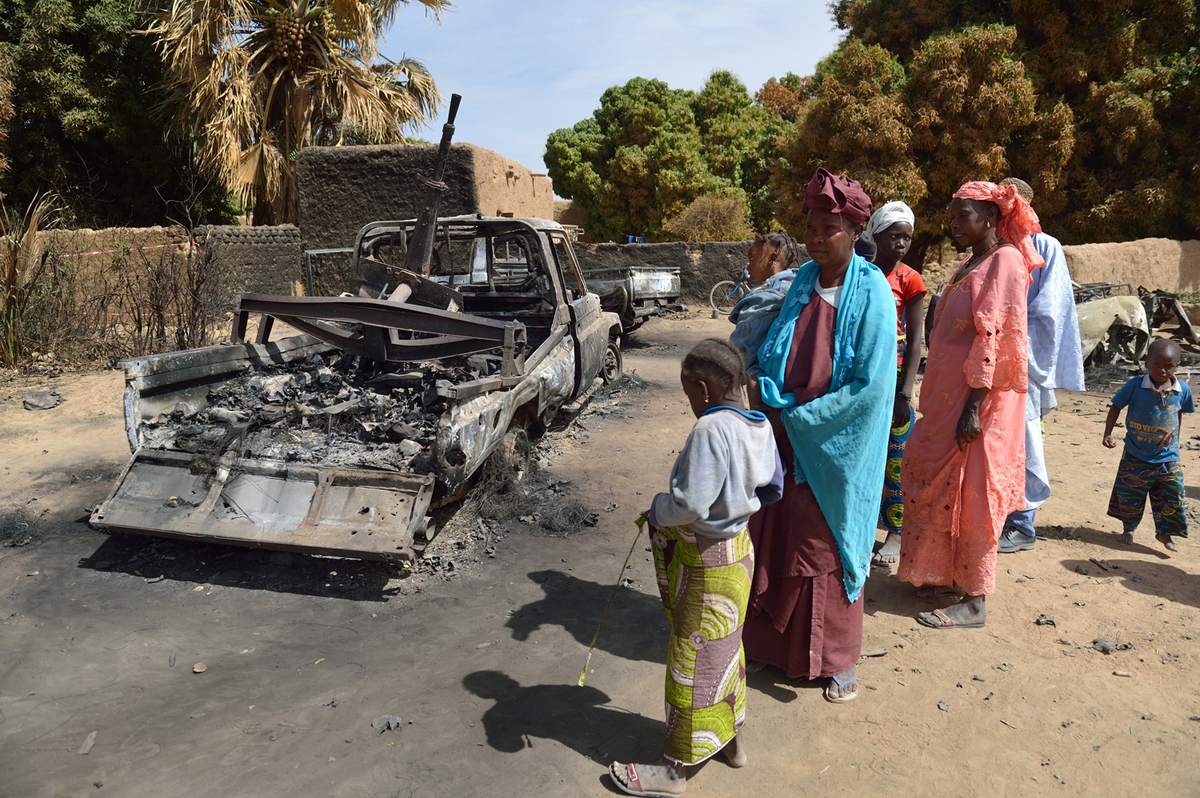 Malians gather around the remains of vehicles used by Islamist rebels that were destroyed by an earlier French airstrike, Jan. 23 in Diabaly, about 250 miles north of Bamako, Mali's capital.

The French-led operation in Mali, which is intended to drive back Islamist militants, appears to be gaining momentum. The U.S. and European powers are helping airlift French forces into the Sahara nation, and African soldiers from around the region are arriving to lend a hand.

In the past week, French airstrikes and ground troops have helped government forces retake the strategic town of Diabaly in central Mali — the first major victory in the fight to reclaim the north. 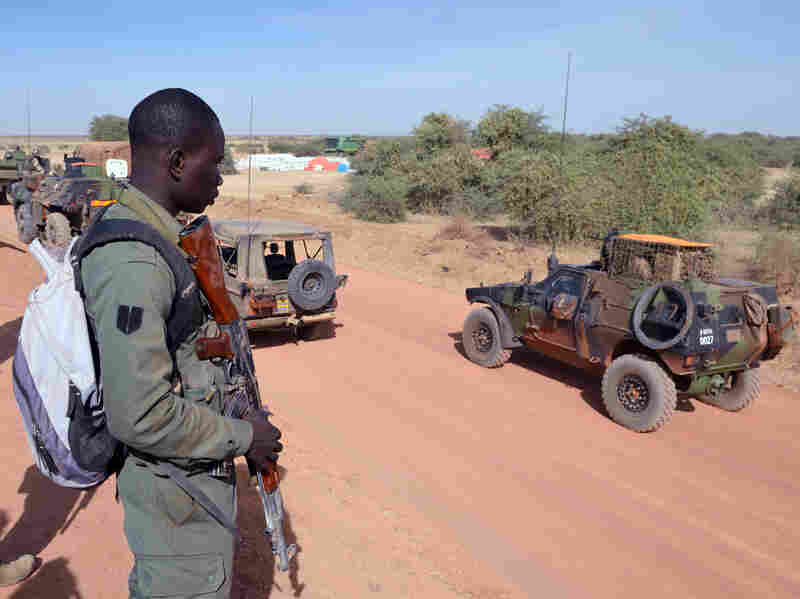 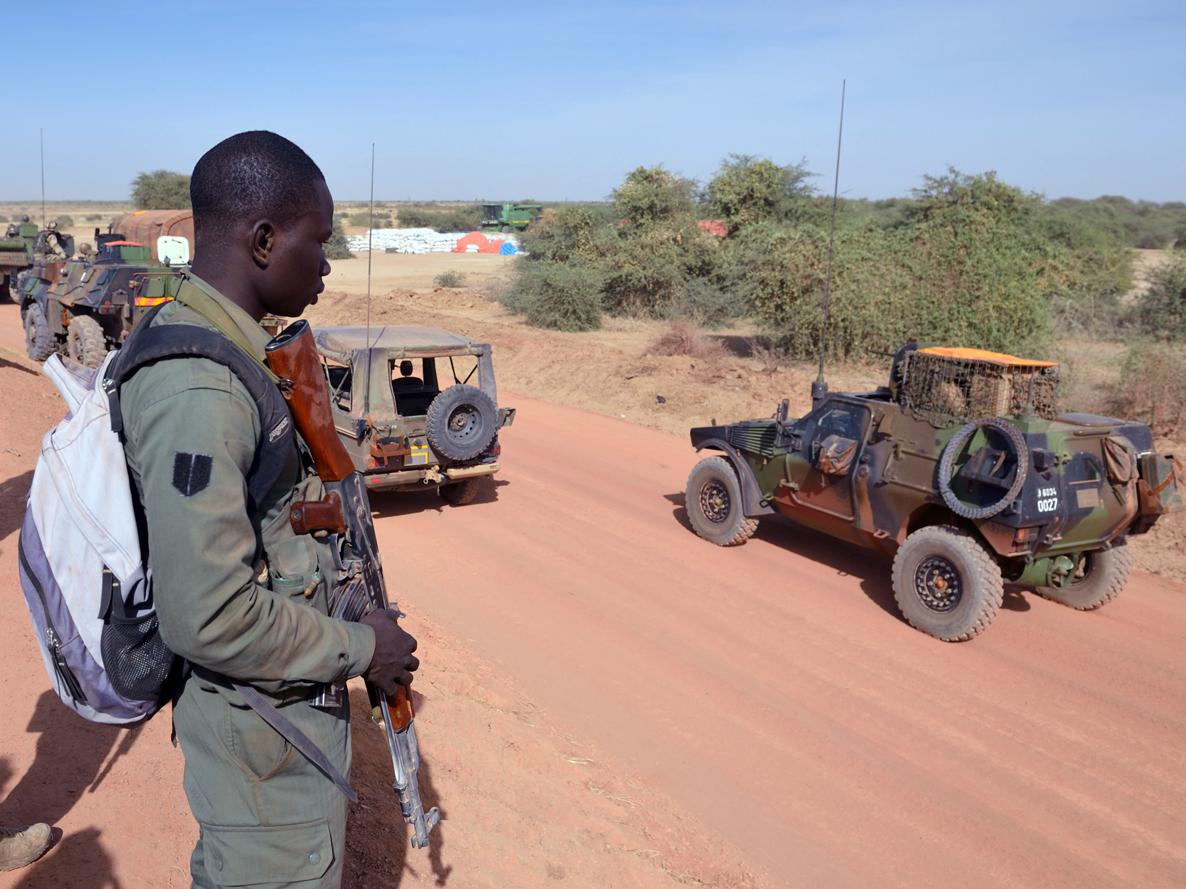 A scene of ruin greets visitors to Diabaly. Burned-out pickup trucks, belonging to Islamist rebels and destroyed by French airstrikes, are scattered about. Bullet cases, mortar shells and even a rocket-propelled grenade litter the sandy ground.

Mimicking the sound of gunfire, resident Kadiatou Sissoko describes the jihadis' occupation of Diabaly and the heavy fighting that followed last week. Troops from Mali and France battled to dislodge them and cut off the rebel advance south toward the capital, Bamako.

Sissoko says she fled from her mud-brick house, taking refuge out of the range of the rebels until they were chased out of town. Like many other residents, Sissoko says the insurgents have nothing in common with the people of Diabaly.

"Who are they? We don't know them or the religion they are trying to impose on us here. They are not Muslims," she says, excitedly. "We know true Islam and what the rebels are peddling is not genuine Islam. We don't know anything about cutting off people's arms, legs and ears as punishment. That's not in our culture."

A worshipper at Diabaly's handsome, sun-baked earth mosque says that instead of the muezzin calling the faithful to prayer, the rebels would fire twice in the air to signal prayer time.

The chief imam is Ibrahim Maiga.

"I am angry at them. I studied Islam — so I know everything they know. Not one of the rebels came to my home or to the mosque to see me," Maiga says. "If they were true Muslims, they should have looked for me, because I am the religious leader here."

It took considerable firepower by the French, and fighting by Malian troops, to be able to wrest back control of Diabaly from the jihadis. French Capt. Antoine — he only gave one name — says the Malian and French armies have been working well in tandem.

France-based International Federation for Human Rights says Mali's army is behind more than 30 killings. Human Rights Watch, based in New York, has also reported rights abuses by Malian soldiers. French Defense Minister Jean-Yves Le Drian says it's a matter of honor to ensure there are no such violations.