Accessibility links
Around The Globe, Women Already Serve In Combat Units Israel, Germany and Canada are among the countries that have marched down the path the U.S. will soon follow in allowing women a role in front-line combat units. And experts say the integration of women elsewhere has gone smoothly, despite concerns.

Around The Globe, Women Already Serve In Combat Units

Around The Globe, Women Already Serve In Combat Units 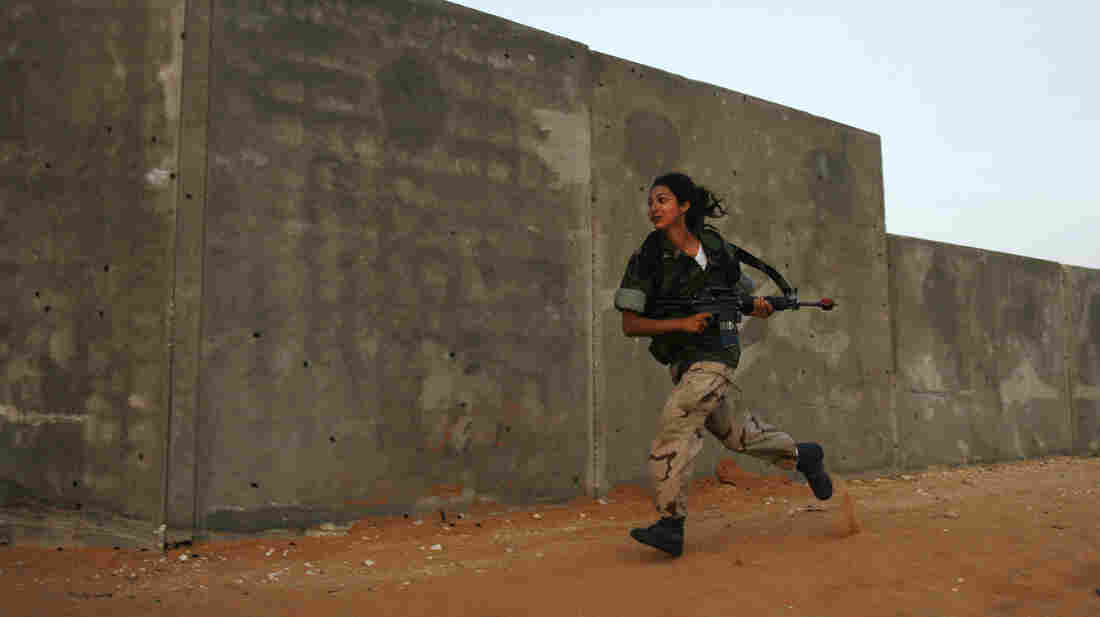 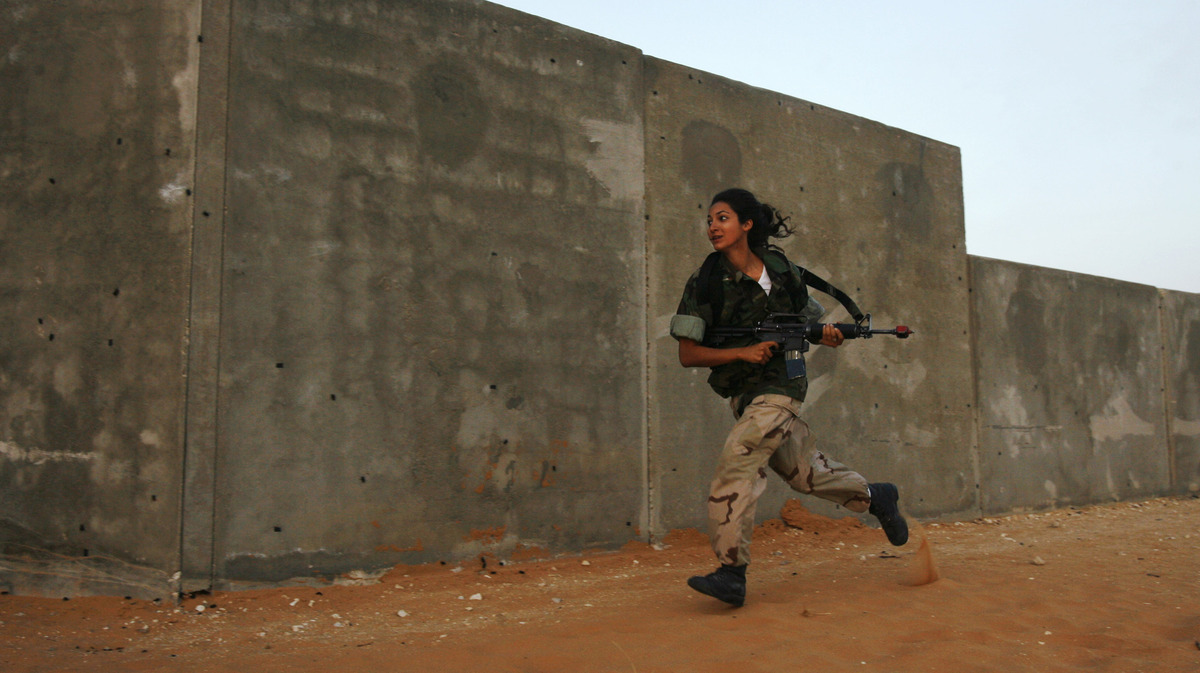 A female Israeli soldier runs during an urban warfare exercise at an army training facility near Zeelim, Israel, on June 19, 2008.

Israel, Germany and Canada are among the countries that have already marched down the path the U.S. will soon follow in allowing women a role in front-line combat units.

And most experts say the integration of women into such roles elsewhere has gone smoothly, despite concerns as to whether they would be up to the physical demands and about the question of fraternization between male and female troops.

The announcement of the U.S. policy shift came Thursday, with Secretary of Defense Leon Panetta saying the armed services have until 2016 to fully implement the change.

As we reported earlier, American women have found themselves on the front lines in Iraq and Afghanistan, but the move would allow them to serve in combat units for the first time. Panetta said Thursday that 152 U.S. servicewomen had died serving in the two conflicts.

Lory Manning, a former U.S. Navy captain, says allowing women to serve in combat roles would place the United States in the ranks of several of its key allies that have taken the same step.

During her time in the Navy, Manning, who is now director of the Women in the Military project at the Women's Research & Education Institute, saw firsthand the integration of women on ships and submarines and as aviators in the 1990s. 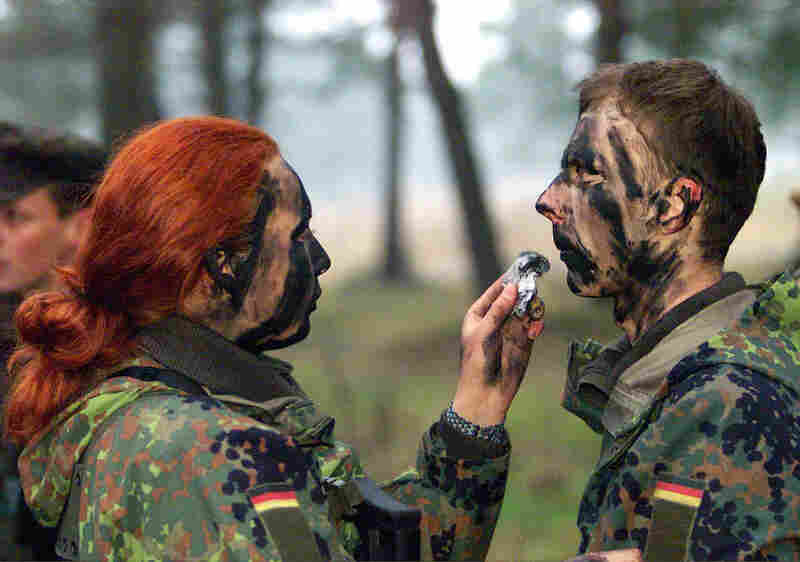 Private Dajana Bartczewski (left) puts camouflage paint on the face of a male soldier during an exercise by German Bundeswehr soldiers from the barracks in Augustdorf, western Germany, on Jan. 9, 2001. Frank Augustein/AP hide caption 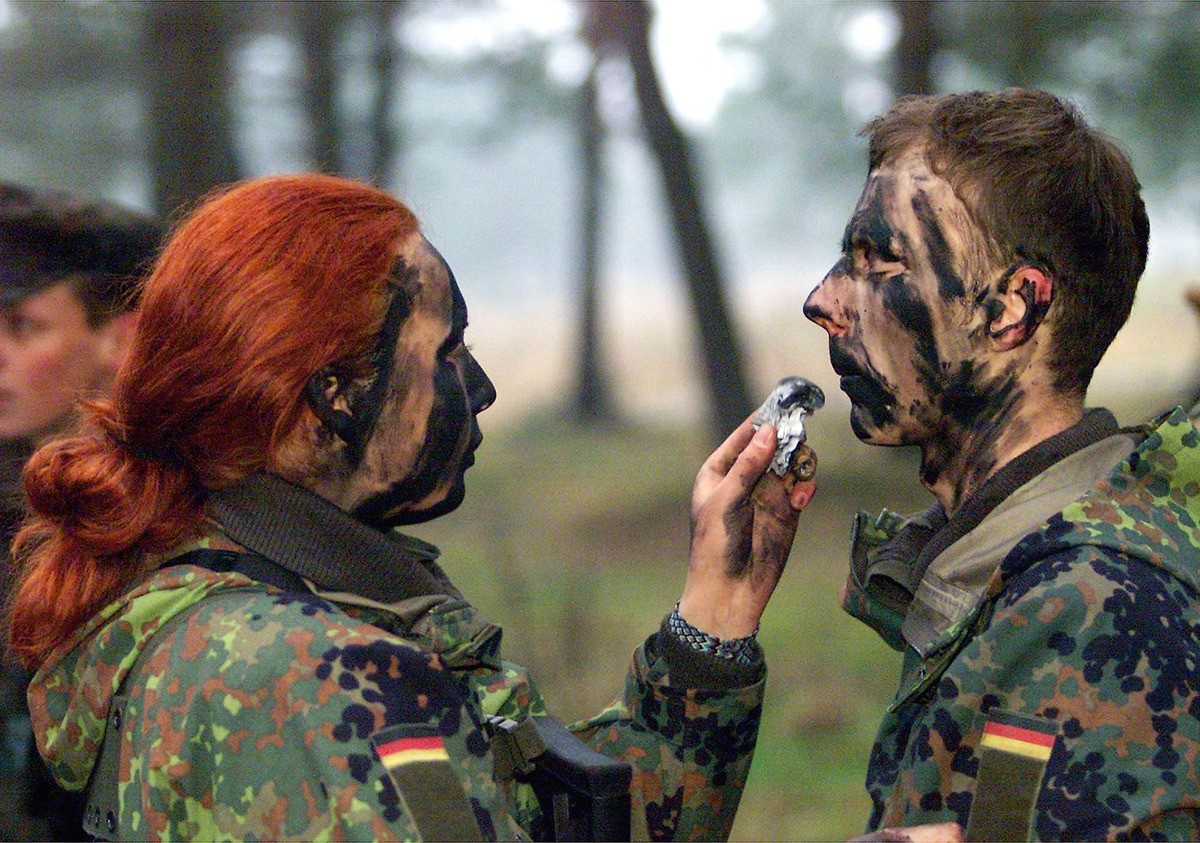 Private Dajana Bartczewski (left) puts camouflage paint on the face of a male soldier during an exercise by German Bundeswehr soldiers from the barracks in Augustdorf, western Germany, on Jan. 9, 2001.

The same concerns have been raised repeatedly, she says: Were women strong enough, would fraternization in the ranks compromise the mission, and would the American public support women on the front lines?

"Those things are always raised and have never, ever been right," she says.

Manning points to Canada, which has deployed women in infantry units serving in Afghanistan. There have been no such issues there, she says.

Throughout history, women have occasionally served in combat, and an estimated half-million were deployed in combat roles in World War II, serving on anti-aircraft batteries in Britain and Germany and as partisans in German-occupied Ukraine and on the front lines.

Among other roles, Soviet women were deployed as snipers against the Nazi Wehrmacht, says historian and author David Glantz.

"Snipers were used extensively, and women certainly shared in these duties," he says. A few of them, such as Roza Shanina, who was credited with 54 hits, have gone down in Russian history, but the names of most have been forgotten, Glantz says.

In Canada and Germany, as in the United States, the question of placing women in combat roles has revolved around equality rather than military necessity, says Phil Carter, director of the Center for a New American Security's Military, Veterans and Society Program.

Carter, who is a former Army officer, says that for most of history, women served in combat only when it was necessary.

"It was usually driven by some existential crisis — whether it's the Soviet Union fighting for its survival or Israel fighting for its independence," he says. "Generally, when given a choice, at least Western countries have not pressed women into service nor used them in anything other than an auxiliary capacity."

In recent years, German female soldiers have been deployed to dangerous areas of northern Afghanistan such as Baghlan province.

Australia is making the same transition the U.S. is making, phasing in the opening up of combat roles, while the U.K. has yet to make such a move.

In Israel, women have long been integrated into combat roles, but Carter says the lesson there is not necessarily directly translatable to the U.S.

"Israel has universal conscription but also a much different manpower requirement," he says. "They have to generate much larger forces in relation to their population size, so they really need women to serve. Also, although women serve throughout the Israeli military, they don't really serve in the infantry or special operations forces and have only done so in Israeli history by exception."

Michael O'Hanlon, a senior fellow at the Brookings Institution, agrees that Israel is an imprecise analogy. Unlike the way the U.S. military operates, in Israel combat is "very near hometowns and home territory."

"I think there is some utility in looking at these other militaries, but we need to bear in mind that there are some important differences in their security requirements and our own," he says.

Men and women currently in the military have different standards for a mandatory twice-yearly physical fitness examination. But there are also occupational standards for certain jobs, says Manning.

"For example, to be a pilot, your femur has to be a certain length, you have to have a certain sitting height," she says. "Those are the occupational standards, and any woman going into any job has got to meet those in the exact same way as a male does."

"The question will be whether the military can keep its standards in place and make them gender-neutral," Carter says. "If they can, this will be a smashing success. But if the military relaxes them even a little bit, then that could potentially degrade combat readiness."

As for concerns about fraternization between male and female soldiers, Carter, who commanded mixed-gender units in both peacetime and war, says it's an issue that's always there, but it's not insurmountable.

"I really think this is doable; it's something that the U.S. military has been doing for a long time," he says.

O'Hanlon of Brookings says if anything, fraternization may be less of an issue in infantry units.

"In some ways, it's a lesser challenge because it's not exactly the place where someone's first thoughts are sexual. I don't see it being any greater problem than it is already," he says.