Accessibility links
Honoring 'Our Will To Live': The Lost Music Of The Holocaust For two decades, Italian musicologist Francesco Lotoro has searched for and resurrected works of music written in World War II concentration, labor and POW camps. He wants to fill the hole the Holocaust left in Europe's musical history and document the triumph of creativity over brutality. 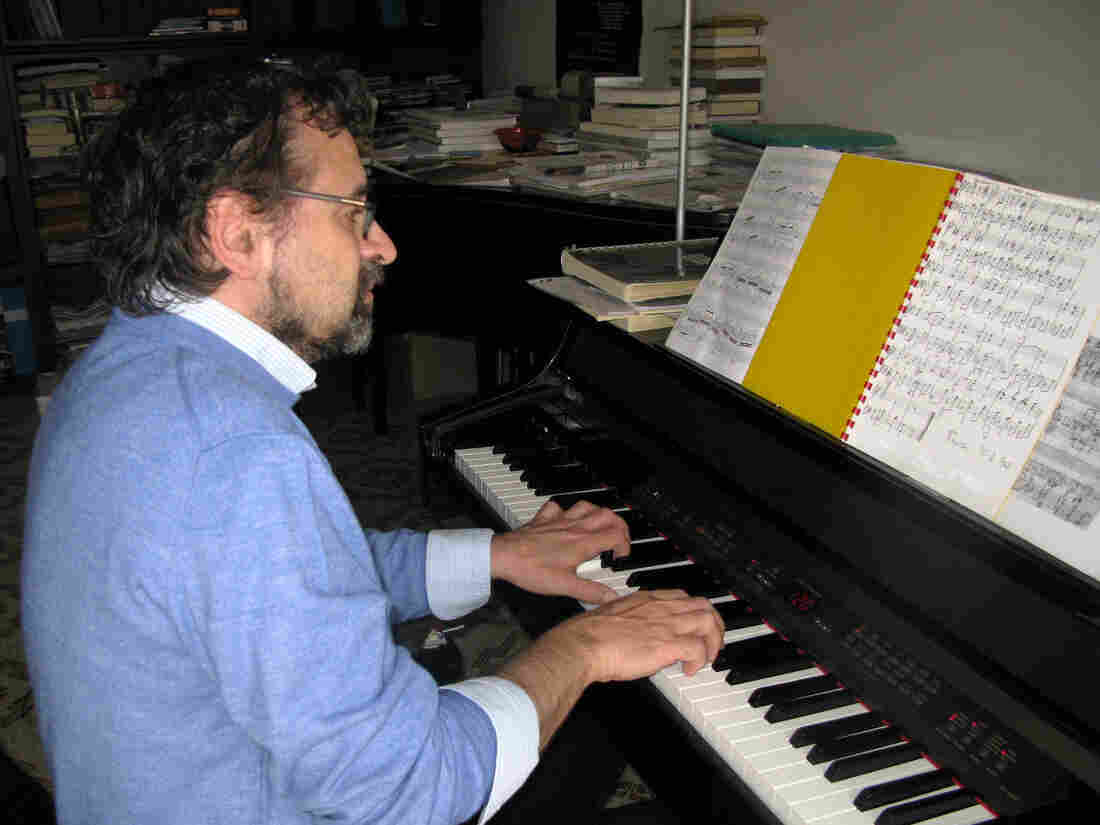 Italian musicologist Francesco Lotoro is on a decades-long mission to find and resurrect music composed by prisoners at camps before and during World War II. Here, he plays music in his home in Barletta, southern Italy. Sylvia Poggioli /NPR hide caption 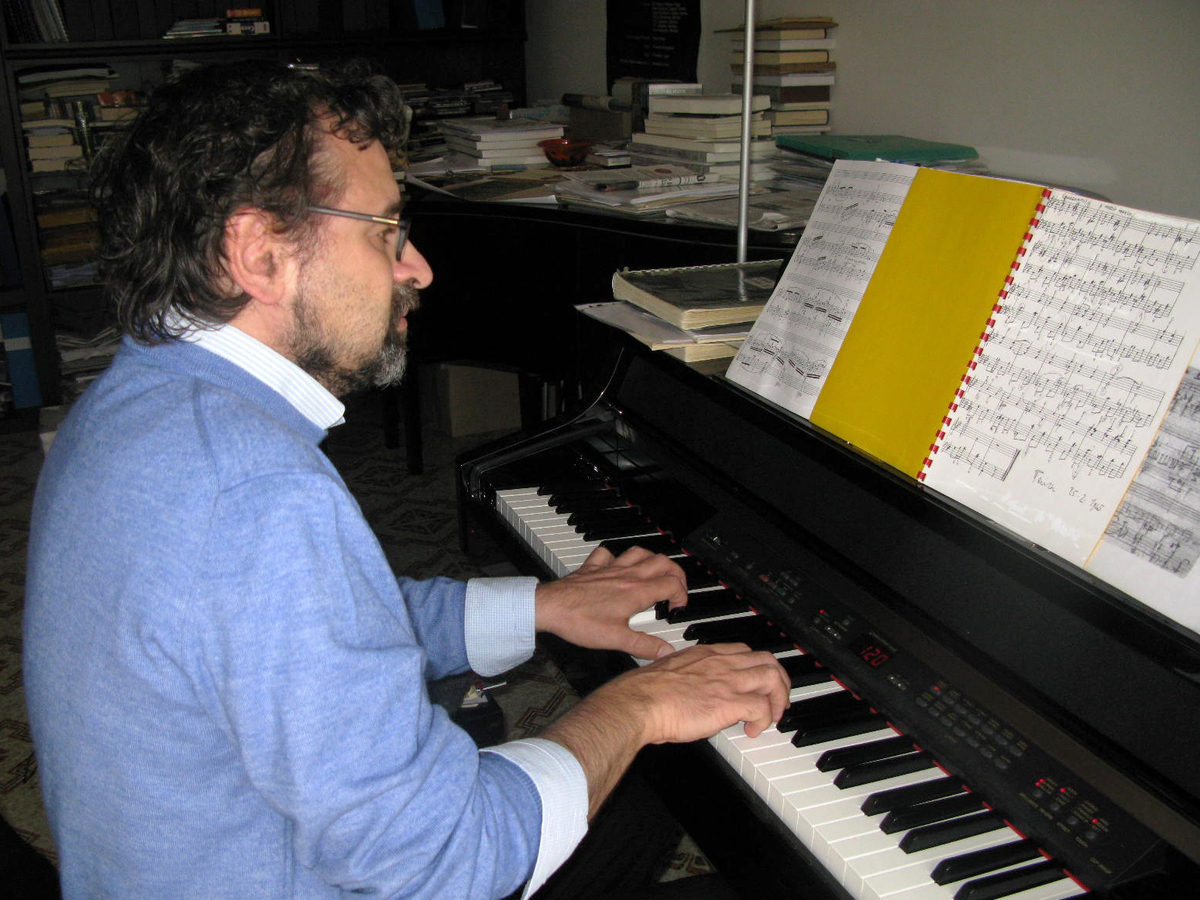 Italian musicologist Francesco Lotoro is on a decades-long mission to find and resurrect music composed by prisoners at camps before and during World War II. Here, he plays music in his home in Barletta, southern Italy.

For the past two decades, in a small town in southern Italy, a pianist and music teacher has been hunting for and resurrecting the music of the dead.

Francesco Lotoro has found thousands of songs, symphonies and operas written in concentration, labor and POW camps in Germany and elsewhere before and during World War II.

By rescuing compositions written in imprisonment, Lotoro wants to fill the hole left in Europe's musical history and show how even the horrors of the Holocaust could not suppress artistic inspiration.

Lotoro's solitary quest began in 1991, with his first visit to a concentration camp. Since then, he has traveled from his native Italy to more than a dozen countries, searching through old bookshops and archives, and interviewing Holocaust survivors. 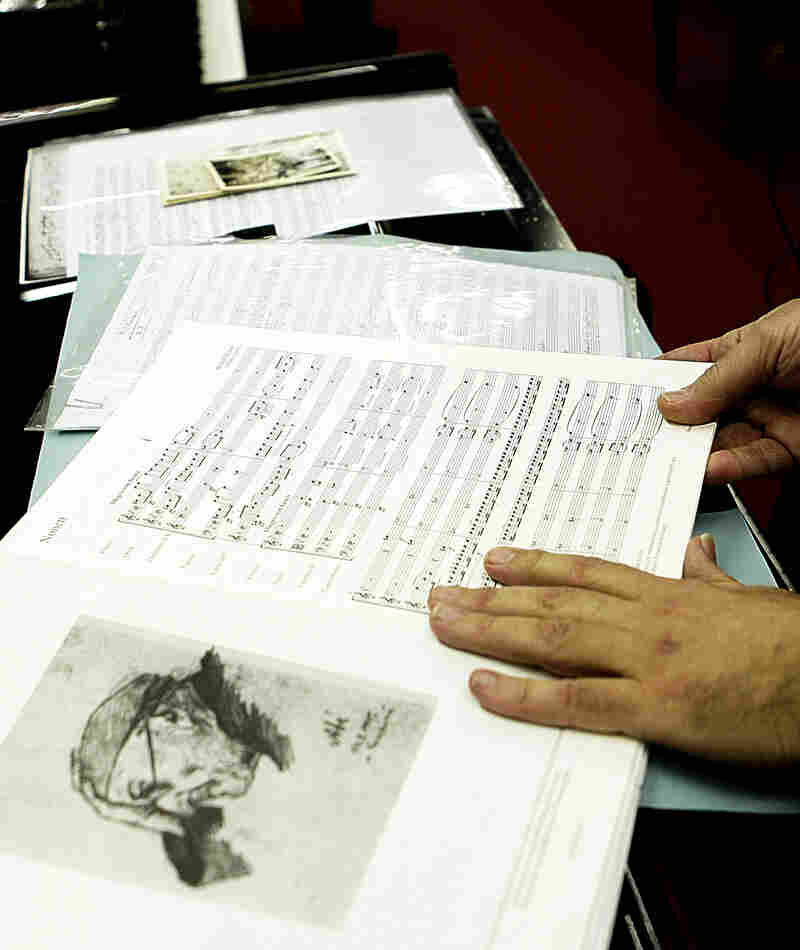 Lotoro displays a copy of music by Rudolf Karel, a Czech composer (in 1945 sketch at left) imprisoned by Nazis for helping the resistance in Prague, in a music shop in Rome, Feb. 22, 2007. Denied access to regular paper, Karel wrote his compositions down on toilet paper. He died of dysentery at the Terezin camp. Plinio Lepri/AP hide caption 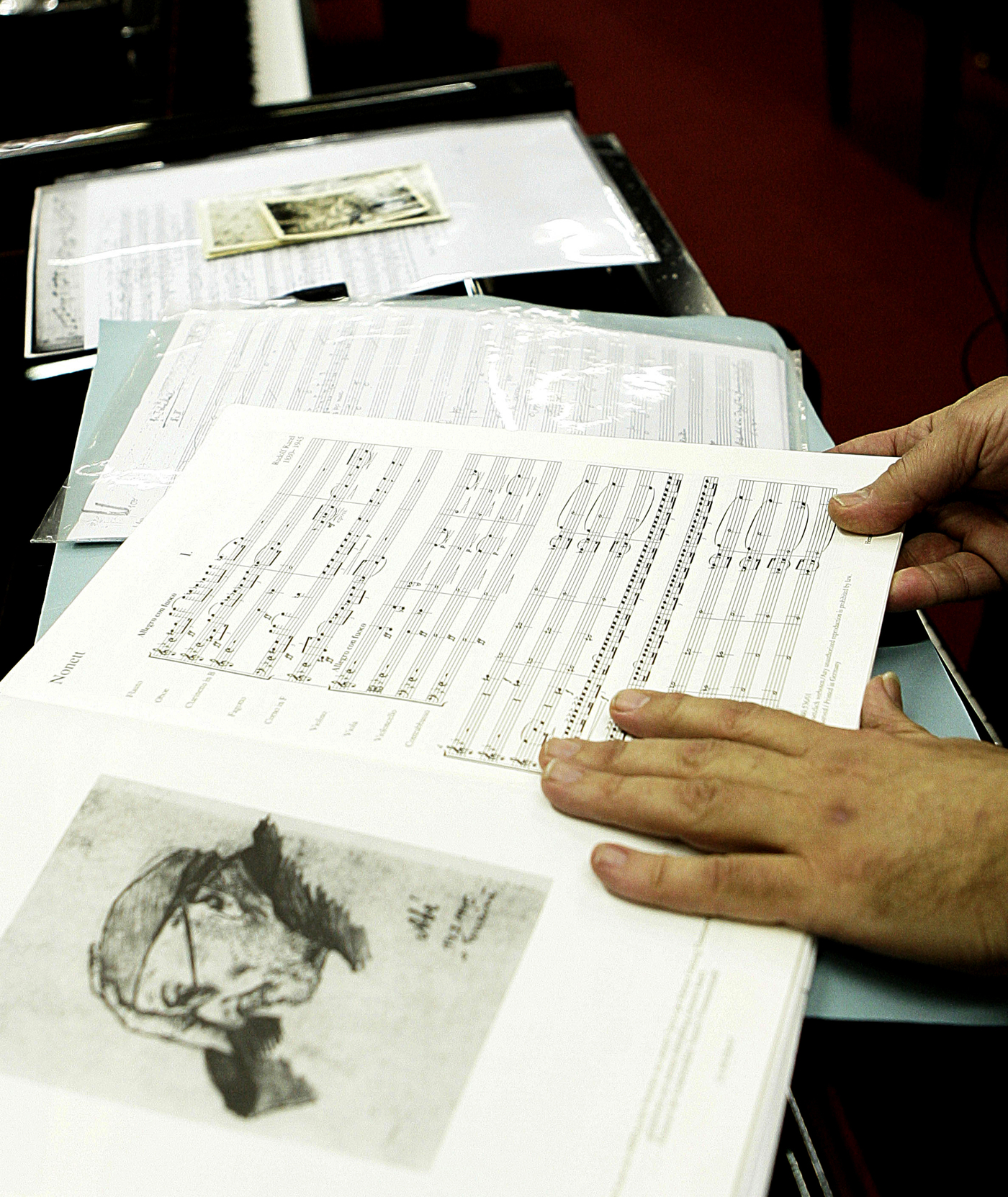 Lotoro displays a copy of music by Rudolf Karel, a Czech composer (in 1945 sketch at left) imprisoned by Nazis for helping the resistance in Prague, in a music shop in Rome, Feb. 22, 2007. Denied access to regular paper, Karel wrote his compositions down on toilet paper. He died of dysentery at the Terezin camp.

He has collected 4,000 pieces — original scores and copies of compositions — some scribbled on scraps of paper and even newsprint. His collection includes works by many non-Jews, Roma and even American soldiers held captive by the Japanese.

'They Wanted To Leave A Testament'

The self-effacing 48-year-old music teacher lives in a modest ground-floor apartment on the outskirts of the small Adriatic town of Barletta. The rooms are filled with bookshelves; musical scores are piled high.

Lotoro believes that whenever a human being is deported and imprisoned, music is born.

"I think is an almost automatic response to a situation of detention," says Lotoro. "They wanted to leave a testament; they leave to us music."

On his piano, Lotoro plays an excerpt from Nonet, a composition for nine instruments the Czech composer Rudolf Karel wrote in Prague's Pankrac prison.

"[The music] is like a telegraph — 'di-di-ti-ti di-di-ti-ti' — and at a certain moment I imagine this is a Morse code," Lotoro says.

As an anti-Nazi political prisoner, Karel was not allowed access to notepaper. But he suffered from dysentery and was able to use toilet paper to write down his compositions. In 1945, he died at the Terezin camp in Czechoslovakia.

Decades later, Lotoro tracked down pieces of the original score and has reconstructed it for the first time since Karel conceived it.

Some compositions were smuggled out of the camps and preserved by survivors. Others were simply found after the camps were liberated. 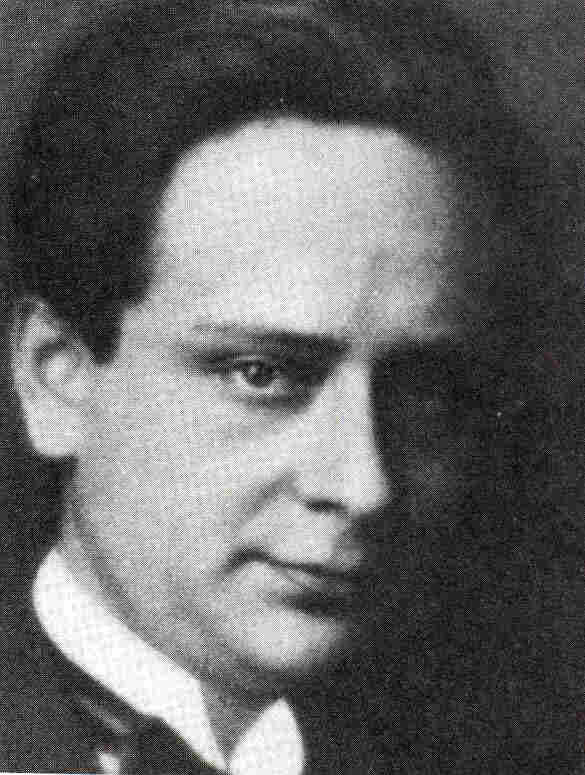 Austrian musician Viktor Ullman composed more than 20 operas while imprisoned by the Nazis. In an essay, he wrote: "By no means did we sit weeping on the banks of the waters of Babylon and our endeavor with respect to arts was commensurate with our will to live." He died in the gas chambers at Auschwitz in 1944. Courtesy of Francesco Lotoro hide caption

Lotoro's mission to find the lost music of the Holocaust was one reason he converted to Judaism in 2004; he later learned his great-grandfather was Jewish.

Lotoro has arranged and recorded 400 of the works he discovered. A selection was released last year in a box set of 24 CDs called Encyclopedia of Music Composed in Concentration Camps.

The compositions Lotoro has resurrected were written in conditions of intense suffering.

As he plays an excerpt of a piece by Viktor Ullmann, Lotoro notes the composer's anguish at not having enough time to complete his work, as well as the sense of urgency in the music.

Ullman, who studied with fellow Austrian composer Arnold Schoenberg, has long been recognized as a prominent composer. Confinement in the Terezin camp made him prolific: In captivity, he composed more than 20 operas.

Lotoro quotes from an essay Ullmann wrote before he was moved to Auschwitz, where he died in the gas chambers in 1944: "By no means did we sit weeping on the banks of the waters of Babylon and our endeavor with respect to arts was commensurate with our will to live."

The Third Reich banned the performance of all Jewish music, from Mendelssohn to cabaret.

But at the camps — with the notable exception of the extermination camps — musicians were allowed a degree of artistic freedom. The Terezin camp was unique. It was an all-in-one ghetto, concentration and transit camp that the Nazis used as a cultural showcase to deceive the Red Cross and for propaganda purposes. 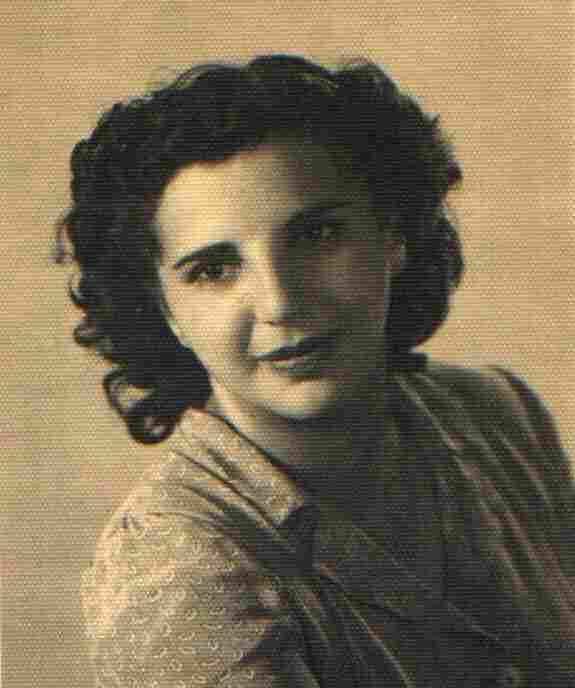 Frida Misul, a singer from Livorno, Italy, was deported to Fossoli and eventually was at Auschwitz. She survived World War II and died in 1992. Courtesy of Francesco Lotoro hide caption 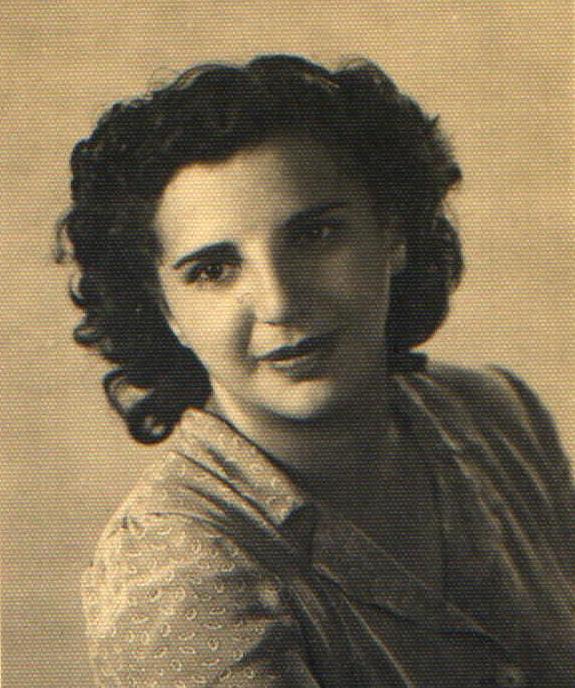 Frida Misul, a singer from Livorno, Italy, was deported to Fossoli and eventually was at Auschwitz. She survived World War II and died in 1992.

Terezin became a crossroads of contemporary music, Lotoro says, before its inmates were transferred to the gas chambers. The same day the Nazis killed Ullmann, they gassed a dozen other prominent musicians.

"In a few hours in Auschwitz, an entire generation of musicians, composers, famous piano virtuosos, the fifth column of the Jewish musical elite of Central and Eastern Europe disappeared," Lotoro says.

For instance, a 19-year-old Lithuanian Jew in a camp in Riga, Ljowa Berniker, wrote a syncopated cabaret song, "Reischsbahlied" (Railway Song). Its carefree tone belies lyrics describing the miserable treatment of Jews in the camp.

Berniker died of exhaustion at the Stutthof camp in Poland in April 1945.

Bret Werb, curator of music at the U.S. Holocaust Museum, says it's not surprising prisoners could write upbeat tunes.

"For them, time had pretty much stopped at the time of their incarceration, and music became a great escape hatch for them," he says. "There are really hundreds, if not thousands of topical songs, original songs, in the style of light music, cabaret music, and so this is what these young people had in their heads."

By no means was all of the music composed in captivity the result of free expression. The Nazis often corralled musician inmates into orchestras at camps like Auschwitz and ordered them to perform while other prisoners were marched out for forced labor.

Or they forced inmates to write compositions.

At the Sobibor camp in Poland, when a cobbler named Shaul Flajszhakier of Lublin refused to beat other prisoners, he was beaten and ordered by the Nazi commandant to compose a song praising the camp's living conditions.

The song, "Fahijad," included these lyrics: "Our life is happy there. ... We receive food. ... How happy it is in the green forest, where I stay." According to scholars of Yiddish, the word fahijad in this song could be a disguised expletive to hide its real meaning from the German guards.

In many cases, compositions were never written down, but the melodies and lyrics were passed on from prisoner to prisoner. For example, in Israel, Lotoro tracked down the words of a tune sung by female prisoners at Auschwitz. Esther Refael, a Jew from the Greek island of Corfu, remembered by heart the lyrics written by her fellow Auschwitz inmate Frida Misul.

An Italian Jew from Livorno, Misul penned scathing new lyrics to the tune of what was then a popular polka in her song "Lagerue" — the Italianized form of Lagerruhe, the 8 p.m. curfew at Auschwitz announced with a whistle over the loudspeaker.

The female prisoners in block 31 defied the Nazi ban against "Lagerue" and sang that one day they would take their vengeance on the brutal guards at Auschwitz.

After two decades hunting for the lost music of the Holocaust, Lotoro is now deeply in debt. But he's determined to carry on what he sees as his life's mission — to right a historical wrong and help rewrite the history of 20th-century European music.

He also wants to demonstrate that the creative mind cannot be imprisoned even in conditions of brutality.

"The artist," he says, "is able to separate the external situation from the creativity that belongs to the mind, to the heart."

Music From The Camps

"Ich Liebe Dich" (I Love You) by Willy Rosen

Willy Rosen was a German singer, pianist and composer who fled to the Netherlands but was eventually sent to Westerbork camp, where he staged cabaret events. He was later moved to Terezin camp in Czechoslovakia, where he died on Oct. 28, 1944. "Ich Liebe Dich" (I Love You) was written at Westerbork in 1943.

"Moon Over the Gobi" by Edmund Jones Lilly Jr.

Col. Edmund Jones Lilly Jr. was an American GI imprisoned by the Japanese in occupied Manchuria. He wrote "Moon Over the Gobi" in the Hoten POW camp in 1945.

"Noche del Plegaria" (A Night of Prayer) by Jozef Kropinski

Born in Berlin, Polish musician Jozef Kropinski was deported to Auschwitz and then Buchenwald. He wrote some 300 songs, quartets and pieces for piano and orchestra during his imprisonment. He survived the Holocaust and died in 1970 in Wroclaw, Poland.

Johnny and Jones were the stage names of popular Dutch singing duo Nol van Wesel and Max Kannewasser. They were deported to Westerbork, where they took part in musical events and were also forced to record six songs. In 1944, they were deported to Terezin and then later moved to several other camps. They ended up at the Bergen-Belsen concentration camp, where they both died in 1945; Johnny died on April 15, 1945, as British troops were liberating the camp.