Accessibility links
After Years Of Estrangement, Eight Siblings Become A Family Bryan Wilmoth grew up in a strict, religious household where all of his siblings either ran away or were kicked out. He was the first to go, after his father discovered he was gay. Years later, Wilmoth tried piecing the family back together and assuming the big brother role once again. 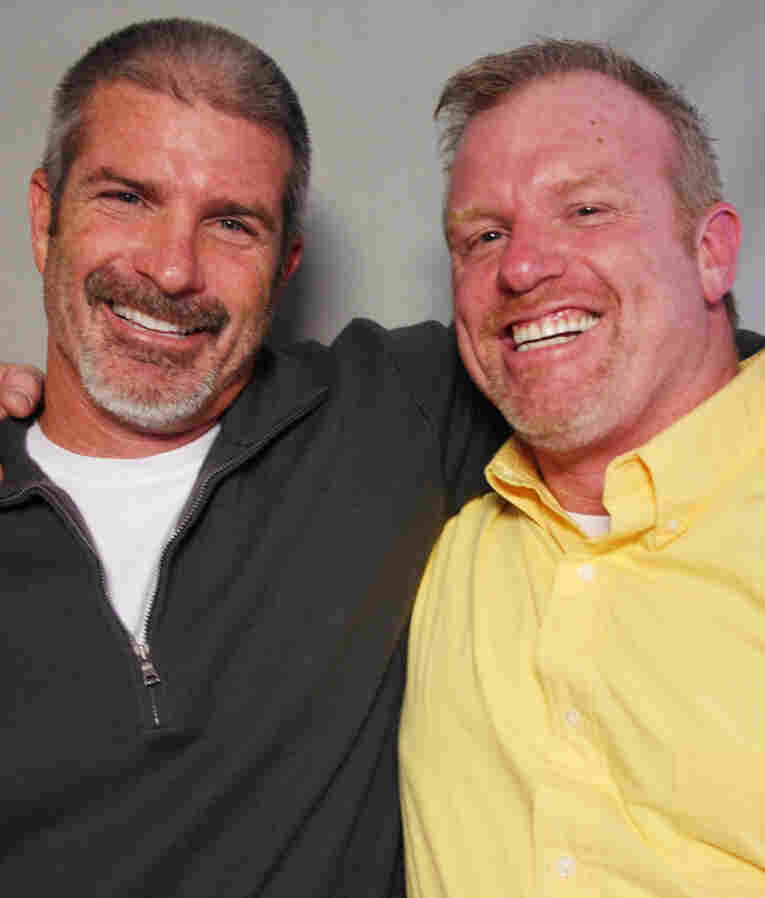 Bryan Wilmoth (right) reunited with his brother Michael years after their parents kicked Bryan out for being gay. All six of their siblings either ran away or were kicked out of their family's home over the years. StoryCorps hide caption 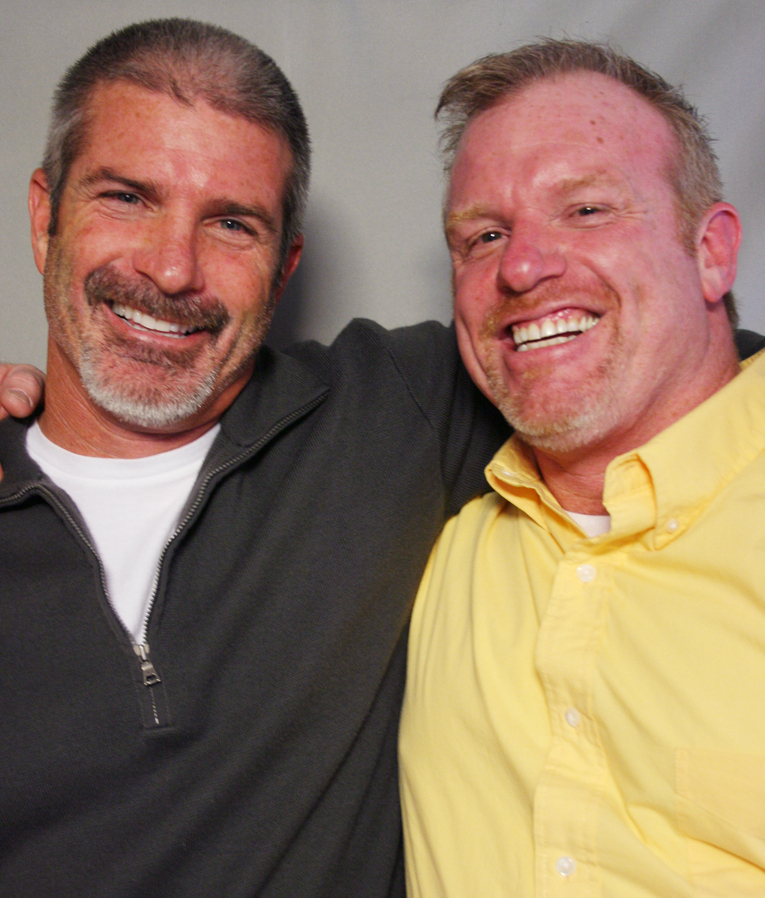 Bryan Wilmoth (right) reunited with his brother Michael years after their parents kicked Bryan out for being gay. All six of their siblings either ran away or were kicked out of their family's home over the years.

When Bryan Wilmoth was in his late teens, his father found a love letter from a man in Bryan's box of things.

Furious at the discovery of a gay son, Bryan's father took him for a ride and dropped him off in the middle of the night with a $5 bill.

"That's sort of all I remember — sleeping outside in the country that night," Bryan, 50, recounts to his brother Michael, at StoryCorps in Los Angeles.

Growing up in a strict, religious household, Bryan and his seven younger siblings all became estranged from their parents over the years.

"I really missed my brothers and sisters when I left home," Bryan explains to Michael. "I remember hearing that if you guys talked to me, if I'd call the house, that you'd get a beating because Dad didn't want you to 'catch gay.' And you guys believed that."

"Granted, it was a fear-based belief," says Michael, 46, who ran away from home when he was a teenager.

"Of course, but you know it was still something I had to try to fix," Bryan replies.

As each one of Bryan's siblings got kicked out of the house or moved away, he made an effort to contact them and become their big brother again. But many of them were initially resistant.

Michael admits he didn't want to know anything about gay people. It took a long time for their relationship to grow.

"But, after you started to accept it, every time you met another gay person, you would say 'Oh, you've got to meet my brother,' and hook me up with every guy that you thought was gay," Bryan says, joining in laughter with Michael.

"I always thought that was really sweet," Bryan says. "And that's when we started coming back together, you know, as brothers and sisters: Bryan, Pam, Chris, Mike, Jude, Amy, Josh and Luke-Henry." 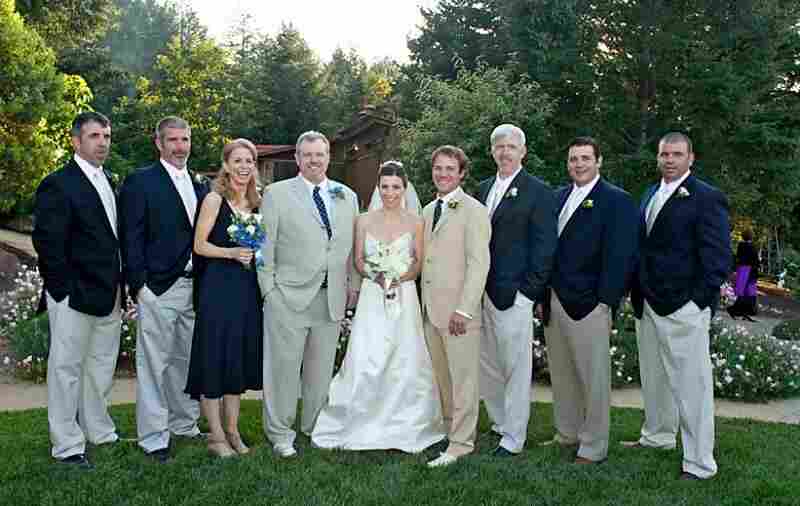 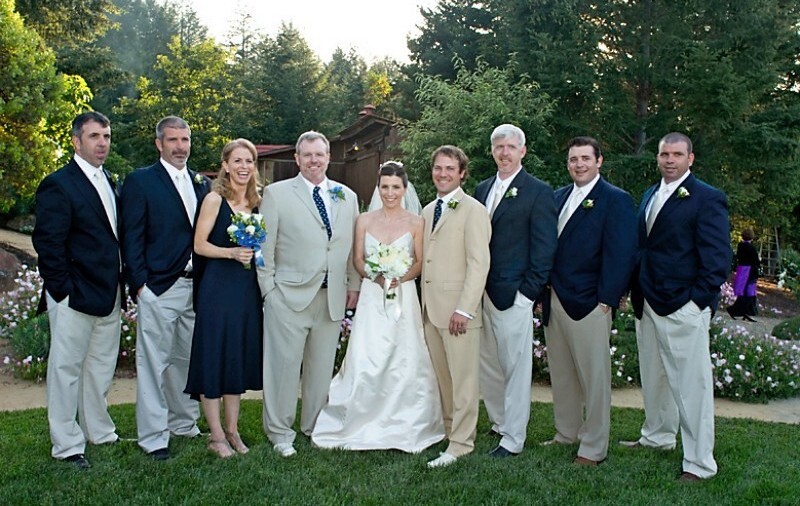 All of the siblings at Bryan and Michael's sister's wedding in June 2007. From left: Jude, Mike, Pam, Bryan, Amy, Curtis (groom), Chris, Luke-Henry and Josh.

'I Really Finally Got To Be A Big Brother'

Luke-Henry had just been born when Bryan was kicked out the house, so the two never met. But one day Bryan got a phone call.

"The voice on the other end said, 'Bryan? This is your little brother Luke,' " Bryan recalls.

By that time, Luke was already estranged from their mother and father, and he wanted to attend college at the University of Dallas. So Bryan used his savings to buy a one-way ticket and round-trip ticket to Dallas.

"Mind you, this is a Catholic school, and I'm the big, gay brother. I'm running around getting him set up for his dorm room," Bryan says.

At the end of the weekend, Bryan gave Luke a huge hug and kiss, and told him how much he loved him.

"And I was just watching after him, like, 'Wow, I really finally got to be a big brother,' " Bryan says.

"And at that moment, he turned around and mouthed, 'I love you.' It was the most beautiful moment I had ever experienced. And I called you from the hotel, sobbing. Do you remember this?" Bryan asks Michael.

"Yeah," Michael replies. "You brought eight siblings that were so far apart to be as close as we all became."

"I just want you to know how much it means to me that you have loved me like this," Bryan says. "And for that I will be forever grateful. It is what I built the foundation of the rest of my life on."

"And let me say that 40 minutes isn't enough," Michael says, referencing the StoryCorps session. "I could do this for four hours, four days, four months. You're a good man."