Accessibility links
For Would-Be Sundancers, Kickstarter Can Fuel Films Financing a movie can be tough — but more and more filmmakers are crowdsourcing their creative cash. Nearly 10 percent of the films at this year's Sundance Film Festival found backers through the online fundraiser Kickstarter. 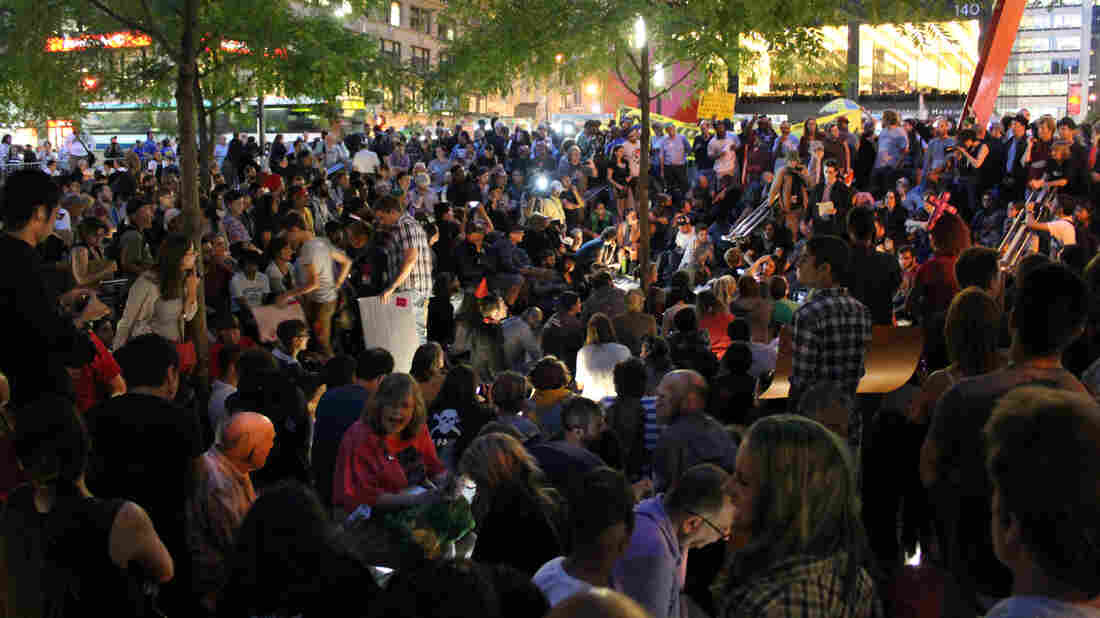 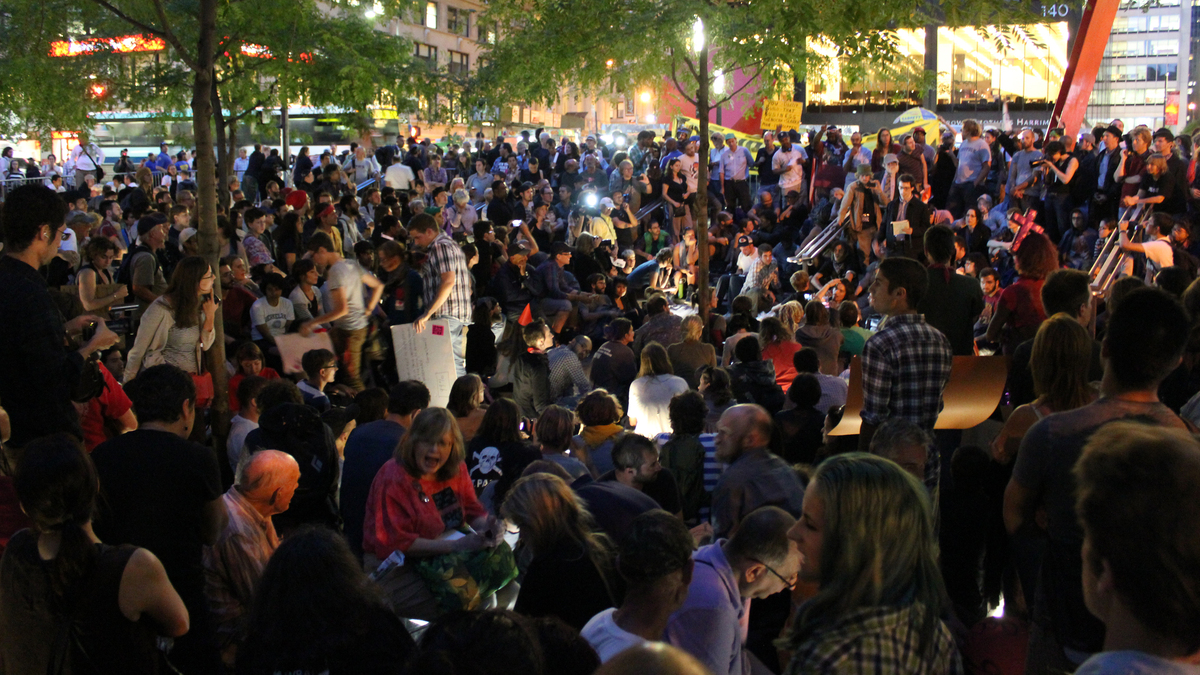 A scene from 99% — The Occupy Wall Street Collaborative Film, a Sundance documentary that raised more than $23,000 on Kickstarter.

If you want to make a movie, you generally need a lot of money. And filmmakers have to be creative about raising it.

Just ask the filmmakers at the Sundance Film Festival, taking place this week in Park City, Utah. Some 10 percent of the films selected for this year's iteration of the prestigious festival raised money through the crowd-funding website Kickstarter.

In the three years since the website launched, Kickstarter-funded films have been nominated for Oscars, picked up by Showtime and HBO, and honored with awards at Sundance, South By Southwest and Cannes.

Kickstarter is used by artists in every discipline, but film is its biggest category. And, as one Kickstarter employee put it, "filmmakers are natural hustlers."

Just check out the videos they make to get you to give them money. There's the you-get-stuff pitch. There's the humorous, feel-sorry-for-us pitch. There's even a pitch from people who you'd think already have the money, like Whoopi Goldberg.

And those campaigns are successful. Goldberg raised over $73,000 for a documentary about the comedian Moms Mabley. Another Kickstarter-funded documentary, Detropia, was recently short-listed for an Oscar.

According to Kickstarter, more than $100 million has been pledged to films on the site.

"We quickly began to realize that this was something really capturing people's attention and excitement, and allowing people to connect with creative endeavors — [something] that was sort of transformational," says Keri Putnam, executive director of the Sundance Institute.

When Sundance supports a film, it's highlighted on a special page on Kickstarter. "They can make more money through Kickstarter than they can through a Sundance grant," Putnam says.

Sometimes filmmakers can nab a lot more, especially if they're already artists with a track record. Charlie Kaufman wrote the movies Being John Malkovich and Adaptation. He and the animation company Starburns Industries ran a Kickstarter campaign to raise money for a film based on his play, Anomalisa.

In their recorded campaign pitch on the site, they said they hoped to make the film "without the interference of the typical big studio process."

They raised more than $400,000. Yancey Strickler, co-founder of Kickstarter, says Kaufman and the animators are the kind of artists who use the site because Hollywood isn't working for them.

"They're always butting up against a system that has different ideas about how art should work," Strickler says. "But yet, they have huge fan bases. Here, they're able to go directly to those audiences and make something the way they wanted to."

Cultivating that fan base is turning out to be another major benefit for filmmakers who run successful Kickstarter campaigns. In raising cash for a project, they also raise awareness, which could result in a bigger audience for their film once it's released.

The people who pledge are called backers. Filmmaker Audrey Ewell is premiering a documentary, 99% — The Occupy Wall Street Collaborative Film, at this year's Sundance Festival. She says Kickstarter calls the effort a "campaign" for a reason. She raised more than $23,000 from hundreds of backers.

"These are the people who are becoming the community that's going to support you, so it's important to involve them," Ewell says. "Encourage everybody to reach out for you on your behalf."