Accessibility links
Spain's Strapped Towns Look To Churches For Cash Alcalá de Henares is re-evaluating the status of hundreds of church holdings that have been exempt from paying property tax for hundreds of years. 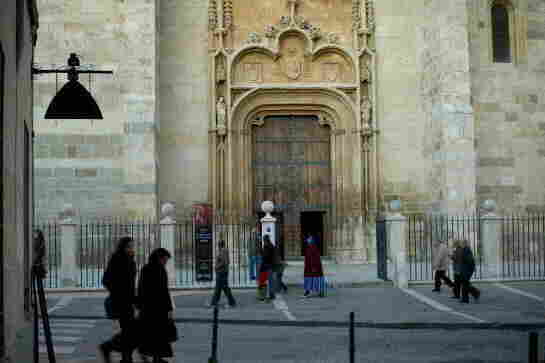 The Cathedral of Alcala de Henares is one of many buildings owned by the Catholic Church in Alcala de Henares, Spain. The town, which is outside Madrid, is broke and is pursuing a plan to have the church pay additional taxes. JMN/JMN/Getty Images hide caption 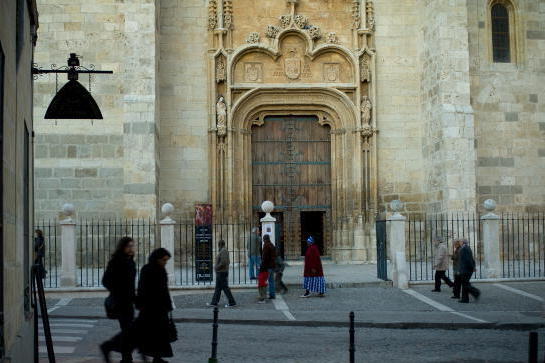 The Cathedral of Alcala de Henares is one of many buildings owned by the Catholic Church in Alcala de Henares, Spain. The town, which is outside Madrid, is broke and is pursuing a plan to have the church pay additional taxes.

The Catholic Church is Spain's largest and richest landowner, though its nonprofit status means it is exempt from paying most taxes.

But amid the current economic crisis, that may be changing.

One college town just outside Madrid is leading an effort by some Spanish municipalities to serve the church an up-to-date property tax bill.

Alcala de Henares is re-evaluating the status of hundreds of church holdings that have been exempt from paying property tax for hundreds of years.

If you ring the doorbell, one of the nuns calls out from behind a wooden shutter.

"Ave Maria Purissima!" (in English, "Holy Mary the most pure!") she yells, by way of answering the bell.

Then, you place your order.

"Good afternoon!" this customer says. "May I have four boxes of roasted almonds, please?"

"That'll be 19 euros" — about $25 — the nun says, shoving four delicately wrapped almond tins through a turnstile.

In addition to prayer and charity, the nuns here run a side business selling candied almonds from this tiny window in their convent. Their vows demand that they not be seen in public. So they sell their goodies through a rotating wooden screen. 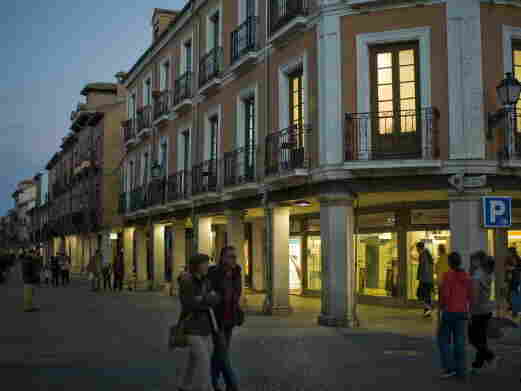 The nuns' profits from their almond enterprise are probably meager — but that's beside the point, say some local lawmakers. The nuns are using at least part of this convent for commercial purposes.

And for that, they must pay.

"We're studying whether any church properties that have long been listed as charities are actually being used for commercial activities. If that's the case, they'll have to start paying tax," said city councilman Anselmo Avendano.

Last summer, Avendano passed a motion to re-evaluate church holdings by square footage. So, if one out of 30 rooms in a convent is selling sweets, it'll have to pay tax on that one room.

That's how the system is supposed to work already, but it's not always enforced.

"I insist, we will not denounce an international agreement. ... It would be irresponsible," Prime Minister Mariano Rajoy told reporters last year. He says any efforts to press the church for more tax would violate a 1979 treaty with the Vatican.

On one side of this disagreement are cash-strapped municipalities and on the other, centuries of tradition.

Avendano says he's a Catholic himself. "We're not questioning the church's good works — charity for the elderly or poor or ill. We're not criticizing that at all. What we want is to re-examine property the church uses to make a profit," Avendano saild. "For example, rental apartments, parking lots and garages that it owns. Those are businesses."

The Catholic Church owns about half of this city. Sometimes people die and leave their house or business to the church, which then becomes the landlord.

"Some of the Catholic schools have swimming pools, and they charge a fee to area residents to swim there on weekends. So the school should be paying tax on that activity. But they haven't been," said another city councilman, Ricardo Rubio.

One Alacla street name, Calle Tercio, or One-Third Street, dates to the Middle Ages when vendors were required to give one-third of their profits to the Catholic Church.

Nowadays, there's a different tax man in town who happens to be broke. The city of Alcala de Henares is $400 million in debt.

Meanwhile, if the Catholic Church had to pay tax on all its property in Spain, it could owe up to $4 billion a year.

"These days, towns are cutting their budgets for health care, education, infrastructure and welfare. But the Catholic Church hasn't had to make a single cut because it gets money from the state," said Juanjo Pico, a spokesman for Europa Laica, a Spanish group that lobbies for the separation of church and state.

When Spaniards file their tax returns, they can check a box to donate money to the church — and the state deducts it automatically. That, and the church's tax breaks, are coming under scrutiny.

But church officials question why this seems to be only about them.

"Why isn't this debate about all nonprofit groups?" asked Fernando Gimenez Barriocanal, the financial director at Spain's Council of Bishops. He says the church has the same tax deal as the Red Cross and other private, nonprofit groups. He also hints at what could happen if the Catholic Church were to have to pay more.

"Obviously, we'd have to direct more of our money to pay those taxes. The church would still want to help those in need, but we'd have less money to do that," he said.

The church may be Spain's biggest landowner, but it's also the biggest charity here — at a time when public welfare programs are being cut and unemployment tops 26 percent.

The Alcala town council aims to complete its land survey by the end of the year — and possibly serve the Catholic Church with an updated tax bill.