Accessibility links
In Paris, A Hunt For Those Who Dodge Dog Duties The streets of Paris are marred by messes from dogs whose owners haven't cleaned up after them. There's a fine, but the culprits have to be caught in the act (or lack thereof). In this personal essay, NPR's Eleanor Beardsley goes after one thing about the city that she finds very, very wrong. 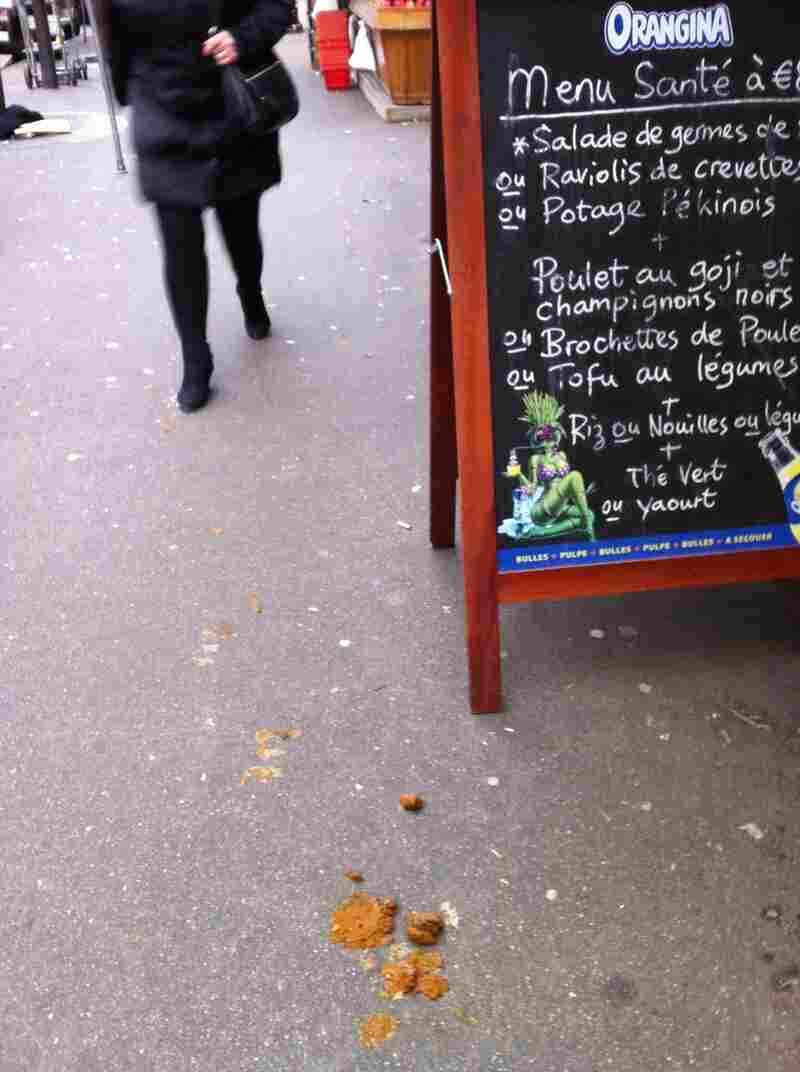 The streets of Paris are marred by messes from dogs whose owners haven't cleaned up after them. There's a fine, but the culprits have to be caught in the act (or lack thereof). Eleanor Beardsley/NPR hide caption 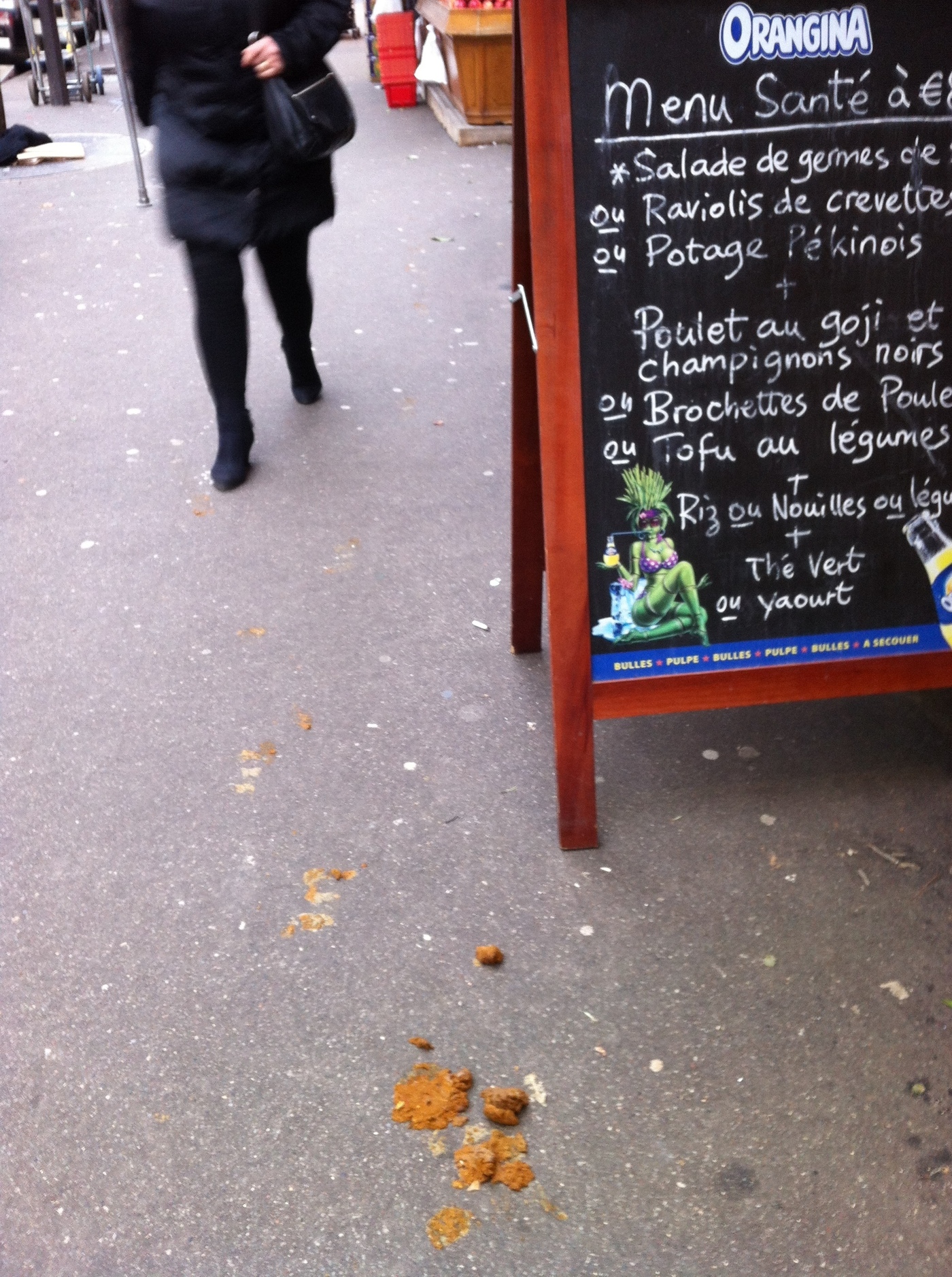 The streets of Paris are marred by messes from dogs whose owners haven't cleaned up after them. There's a fine, but the culprits have to be caught in the act (or lack thereof).

This essay by NPR correspondent Eleanor Beardsley was borne out of the personal exasperation of living in a beautiful city with one thing she found very, very wrong.

When you walk down the grand boulevards of the City of Light, you have to be careful where you step.

Every day, my senses are assaulted by the piles I have to dodge in the Parisian streets. There are the fresh ones that leave me feeling angry, and the ones from the previous days that have begun to smear down the street on the bottoms of people's shoes.

About a year ago, I began to get really worked up about it. Who were these selfish people? And why could I never catch the wretched little chien who left his telltale turds on my street?

So I made a cardboard, cutout stencil that said, "Be Proud of Paris!" and sprayed it next to the piles, thinking I could shame people into picking up. When that didn't seem to work, I just circled the patties in bright red paint and wrote "Shame!" next to them. Though these exercises gave me some measure of satisfaction, I was still frustrated and determined to try get to the bottom of it.

Then I discovered that tracking down and fining offenders is actually a government job.

Hamidou Traore is head of the incivility brigade for the city of Paris. He fills me in on things early one morning at headquarters in the center of the city. As it turns out, it's been illegal to leave dog poo on the streets of Paris since 1982. But Traore says it's hard to change habits.

"There are people who think because they pay taxes, the street cleaners should clean up behind their dogs," he says.

Traore says Parisians have had enough time to learn the rules, and that his teams try to change mentalities through punishment. Around here, dog poo goes by its technical term, "canine ejection." And there's a $50 fine for leaving it on the pavement. But of course, you have to catch the person.

Enter Frank Calvet and Eric Robichon. They're two of the 100 or so plainclothes inspectors with the incivility brigade. The duo crisscrosses Paris to find and fine offenders. I was thrilled to have a chance to accompany them.

To be fair, Calvet and Robichon aren't just out looking for dog poop. Their task is to find and punish all the litterers who degrade the quality of life in the French capital. The worst offenders, they say, are the construction workers who leave bags of heavy debris on the street. But to indulge me, we quickly get down to business, so to speak, and begin following dog walkers.

First, we're hot on the trail of a woman and her two squeaky little companions. I see immediately that Calvet and Robichon are real pros. Just like in the movies, they lag casually behind and duck in and out of doorways so as not to be spotted. After following her for a good 20 minutes, she heads back into her apartment building, and we're left with nothing. I can see that this isn't going to be easy.

And then, all of a sudden we round a corner and there's a dog doing it right in the middle of the sidewalk! We're going to catch a canine ejector, and I'm going to get some satisfaction!

And then, just as surprisingly, the elegantly dressed woman of a certain age stoops to pick it up. She even wipes the sidewalk with tissues. I simply have to go over and congratulate her.

"You shouldn't own a dog if you don't pick up after him," Claude Bocara tells me. "That's disgusting."

Calvet and Robichon say they don't pounce until a dog owner turns his back on the poop. They tell me some people are indignant when confronted, but most are sheepish and say they were going to pick it up.

I end up going out with Calvet and Robichon on two cold, early mornings. We follow countless dog walkers. Many fit the right profile, letting their dogs run off the leash and dropping their cigarette butts on the ground. We watch for the most likely dog culprits: "You could follow a poodle all day, but a Lab gets right down to it," Calvet says.

In the end, all the owners we spot pick up. How can it be? I'm starting to believe what Calvet and Robichon tell me, that most Parisians do their duty.

The guys try to console me. Then, as we're returning to the station after scouring my neighborhood in the 15th Arrondissement, we almost walk right into a steaming pile, and I am beside myself again. It looks like if I want any satisfaction, I'll have to go back to my spray-paint cans.