Accessibility links
Like Sumo Wrestling, With Lots Of Spit: Camels Tussle In Turkey Call it "the rumble by the ruins." Each year, Turkey's toughest camels gather in Selcuk, near the Aegean Sea, for the Camel Wrestling Championship. It's a Turkic tradition dating back thousands of years. But it is a tradition under threat.

"Obama vs. Rambo" may sound like an Onion headline for the gun control debate. But it's actually a must-see matchup for spectators on Turkey's Aegean Coast. The competitors? Two male, or bull, camels.

The biggest event of Turkey's camel wrestling season takes place each year in the town of Selcuk, near the ancient ruins of Ephesus.

Among the competitors at the Camel Wrestling Championship this year is Cilgin — or "Crazy" — Hasan, as he's known in the arena. He is a one-ton behemoth: a Tulu camel dressed in bright embroidered cloths, neon-green pompoms and a traditional wooden saddle with the nontraditional word "Bulldozer" printed on the harness.

Owner Ismail Egilmez is giving Cilgin some last-minute pointers. The language doesn't sound like Turkish, and I ask my translator, Emre Danisan, what he's saying.

Whatever it is, it seems to work: Cilgin is frothing at the mouth — literally. 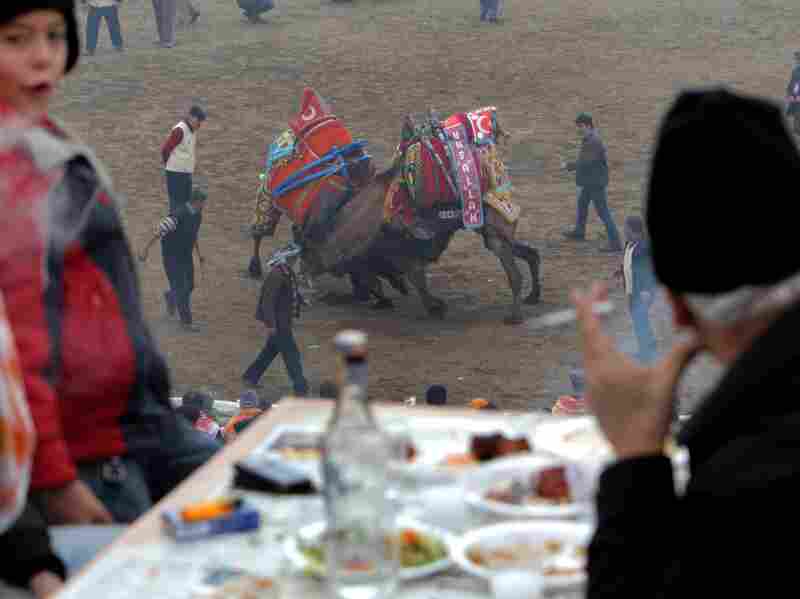 People watch wrestling camels as they enjoy a meal and the Turkish national drink raki during the Camel Wrestling Championship in Selcuk, on Jan. 15, 2012. Tolga Bozoglu/EPA /Landov hide caption 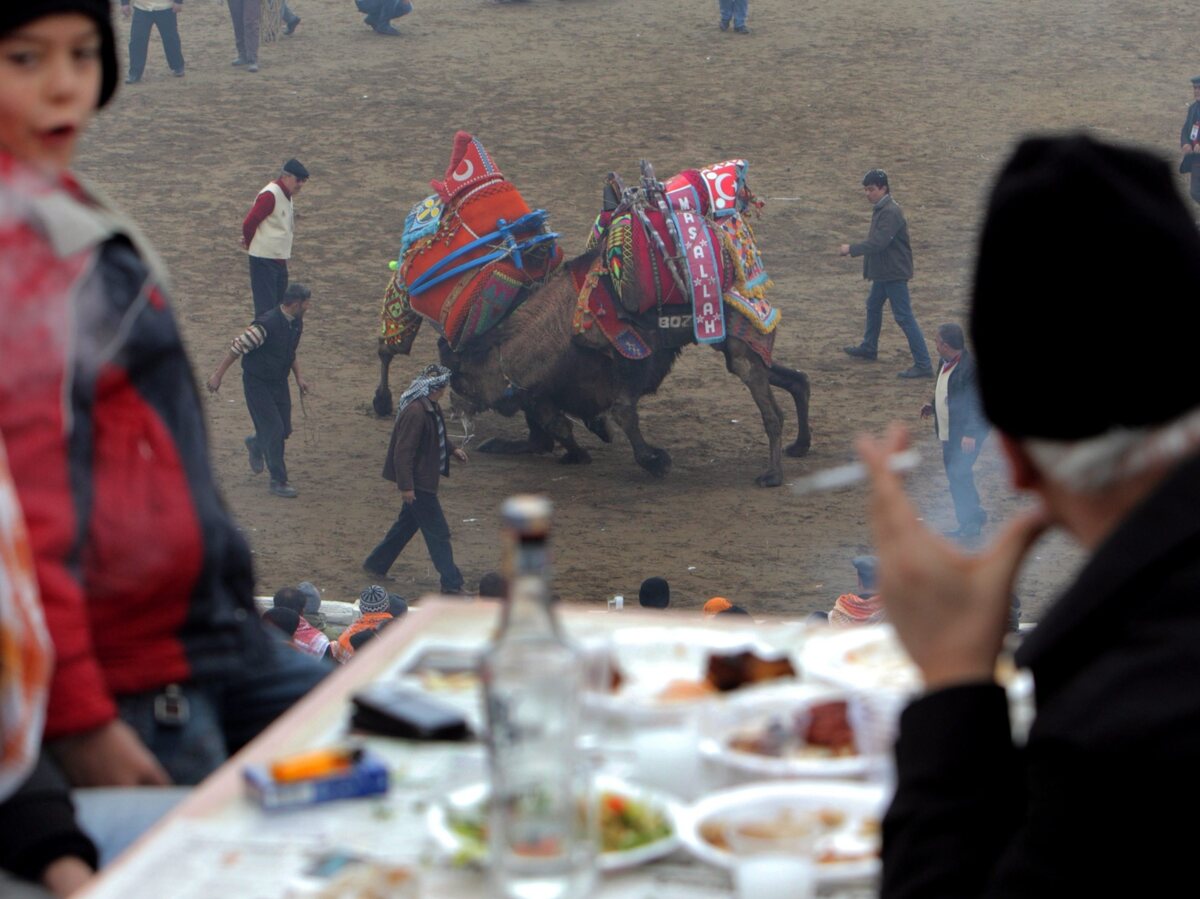 People watch wrestling camels as they enjoy a meal and the Turkish national drink raki during the Camel Wrestling Championship in Selcuk, on Jan. 15, 2012.

We enter a caravan of camels walking down the highway toward the Aegean Sea. We're in the midst of more than a hundred bell-wearing camels, all bound for the same place: a natural amphitheater, tucked away a few short miles from Selcuk.

It's a place rife with history; camel wrestling is no different, but it's a sport in decline.

Every year there are fewer camel competitors. And the sport doesn't have the audience it used to. For modern Turks, the idea of watching two humped ungulates tangle just doesn't hold the same appeal as, say, YouTube.

But you wouldn't know that at first glance during the recent competition.

Vendors hawk commemorative shawls and Efes beer as crowds file in. The air is thick with the smoke of sizzling camel sausage.

After a few hours of waiting in the crowd, Ismail leads Cilgin into the ring. His opponent is wearing bright pink.

It used to be that a female camel would be in the ring with them — nature's way of instigating a fight. Today, though, the owners just pull the camels into each other.

It works. Cilgin leans in from the right. His opponent nips at his legs. They get in an awkward side-by-side headlock, and the announcer gives a play-by-play.

To win, one camel must knock the other down or send it running in a 10-minute time limit. But that seldom happens.

People compare the sport to bullfighting, but really, it's more like sumo wrestling — with lots and lots of spit.

And, truth be told, the actual wrestling is kind of boring

After 10 minutes, a whistle sounds. The match ends in a draw. No surprise — most do.

The camels are led out of the arena, and two more take their place.