Accessibility links
Saying Goodbye To Bedford Street's Tireless Collector Despite his disability, Larry Selman devoted more than half his life collecting money for multiple charities from total strangers on the streets of New York. The subject of the Oscar-nominated film The Collector of Bedford Street died Jan. 20 at the age of 70. 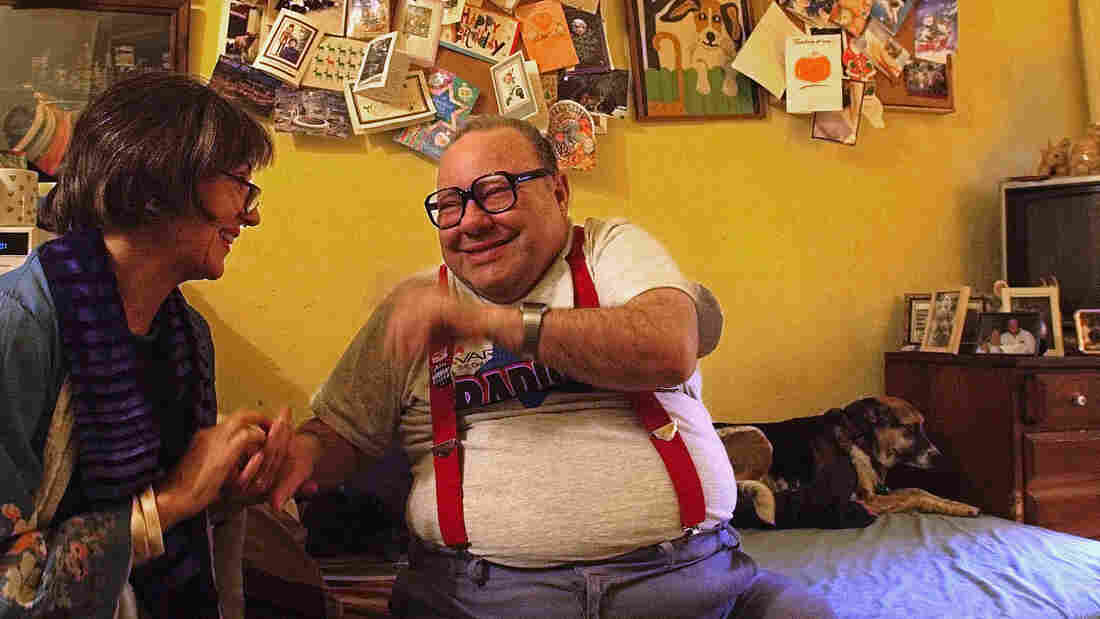 Alice Elliott, producer of the documentary The Collector of Bedford Street, laughs with Larry Selman in 2003. Selman died Jan. 20. He was 70. Gregory Bull /AP hide caption 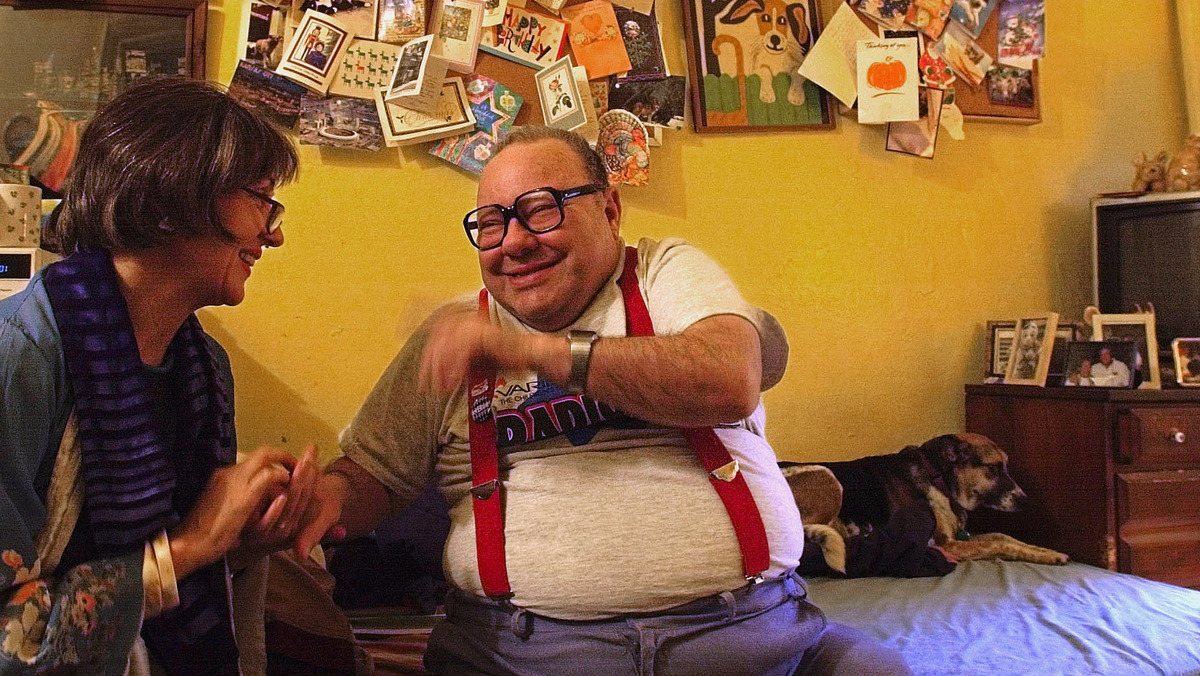 Alice Elliott, producer of the documentary The Collector of Bedford Street, laughs with Larry Selman in 2003. Selman died Jan. 20. He was 70.

Larry Selman devoted more than half his life collecting money for multiple charities, on the streets of New York, from total strangers. He did this for nearly 40 years, despite the fact he was developmentally disabled. Selman became the subject of filmmaker Alice Elliott's Oscar-nominated documentary, The Collector of Bedford Street. He died Jan. 20 at the age of 70. Manhattan-based reporter Jon Kalish has this remembrance.

I first met Larry Selman in 2004, when I was working on a story about the filmmaker Alice Elliott for NPR.

Selman would only consent to an interview if I took him out to brunch. Normally, I wouldn't agree to such a demand, but Selman had a charm about him that was difficult to resist, so I arranged to meet him at his favorite brunch spot where the waitstaff seemed to know him well.

Watch a streaming version of the Oscar-nominated documentary about Larry Selman, The Collector of Bedford Street.

During the interview, he told me he wanted Elliott to make another film about him, "a sequel, part 2. I would be so delighted," he said. But at the time, Elliott was deep into her next film, a documentary about two disabled women who were taking care of each other.

Still, Selman and Elliott continued to travel to screenings of The Collector of Bedford Street. One year they went to Qatar. Selman's neighbor, Sally Dill, who served as his traveling companion for eight years, told me Selman loved to travel and was good at it. Apparently, as a young man, Selman worked as a courier, running packages from New York to Washington, D.C., and Boston.

On Monday night, when Selman's neighbors were sitting Shiva at Elliott's home, Dill told me Selman used to address airline pilots as "captain" at the airport, and that often when he boarded a plane he stopped in front of the cockpit and asked them to set his watch to the time zone he was flying to.

Across from where I sat talking with Dill, there were framed pictures of Selman. I chuckled as I looked at a shot of him dressed up as Santa Claus; two firefighters were helping to push Selman into the back of a fire truck.

It was at about that time that yet more admirers of the Collector of Bedford Street rang the buzzer to Elliott's apartment. It was the first of two contingents from New York City Fire Department's Ladder Company 5, who came to pay their respects. The firefighters were in uniform, and everyone in the apartment got choked up because they knew of the deep bond Selman had with firefighters, collecting for the families of those who perished on Sept. 11.

One firefighter told me that Selman was known as "Larry the Raffle Guy" because he was often at the firehouse at Sixth Avenue and Houston Street selling raffles to benefit one charity or another. Later that night, Elliott told me a story about the time Selman was out in the East New York section of Brooklyn dressed as Santa Claus, appearing at a children's party at the local firehouse.

Of course, because Selman still had a lot of childlike wonder in him, the firefighters in Brooklyn took him out for a ride on a firetruck. While they were out, as the story goes, a call came in, and off they went with Selman on board to go fight a fire.

There was another photo of Selman in Elliott's apartment. He was looking spiffy in a dark suit as he was posing with former Secretary of State Colin Powell at a ceremony in Los Angeles in 2009. They were both recipients of the Caring Award for their volunteer efforts.

Dill told me that one of the first things Selman said to Powell was, "Do you want to make a donation for cancer?" After the photo-op, Powell walked up to Selman and gave him a folded up bill, which Selman promptly deposited in his envelope. At the end of the evening, Selman decided to count up the money he collected and unfolded what turned out to be the $100 bill Powell gave him. Dill said it was the high point of the evening.

Recently, I re-screened The Collector of Bedford Street and laughed when I got to the scene where Selman was asking a doctor for a donation as he was being examined. "Five dollars," he says. "Five dollars; it goes to Meals on Wheels and the Caring Community."

It reminded me of the time I went to his 70th birthday party in April. I went up to him as I was leaving and wished him a happy birthday. Of course, he asked me for a contribution "for animals."

The last time I saw Selman was shortly after Superstorm Sandy. I dropped by his tiny Greenwich Village apartment, which is across the street from Elliott's home, to interview him for a podcast I was producing for The Jewish Daily Forward.

I had heard that for the five days the neighborhood was without power. Selman's home-care attendant, Ganpat Sebrian, stayed with him around the clock and cooked him French toast for breakfast every morning. I stood next to Selman, recording him as he lay in the hospital bed that had been brought in to his apartment after he suffered a stroke in 2007.

I had already been informed of the sad news that his cat, Happy, died in the days after Superstorm Sandy. Selman wanted a new kitten and kept telling me he was going to the ASPCA to adopt one. He said that saving a cat's life was a mitzvah, a good deed. Selman knew about mitzvahs.

Selman's neighbors are looking for a new home for his beloved canine companion, Penny. A celebration of Selman's life will take place April 2, on what would have been his 71st birthday, at the Greenwich House Music School in Greenwich Village.