Accessibility links
'Sick And Tired,' Residents In Southern Mexico Defend Themselves They are fighting back against drug traffickers and gangs who have terrorized the residents of Guerrero state. Armed with shotguns and rusted machetes, the self-defense brigades have set up roadblocks and arrested suspects — all without help from the authorities. 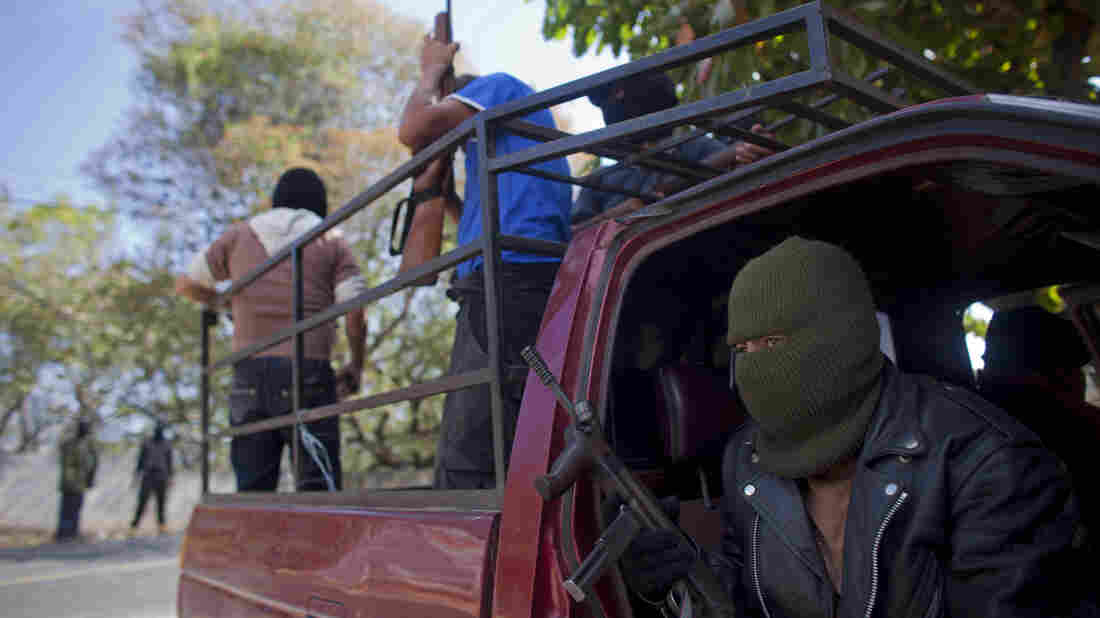 Masked and armed men guard a roadblock near the town of Ayutla, Mexico, on Jan. 18. Hundreds of men in the southern Mexican state of Guerrero have taken up arms to defend their villages against drug gangs. Dario Lopez-Mills/AP hide caption 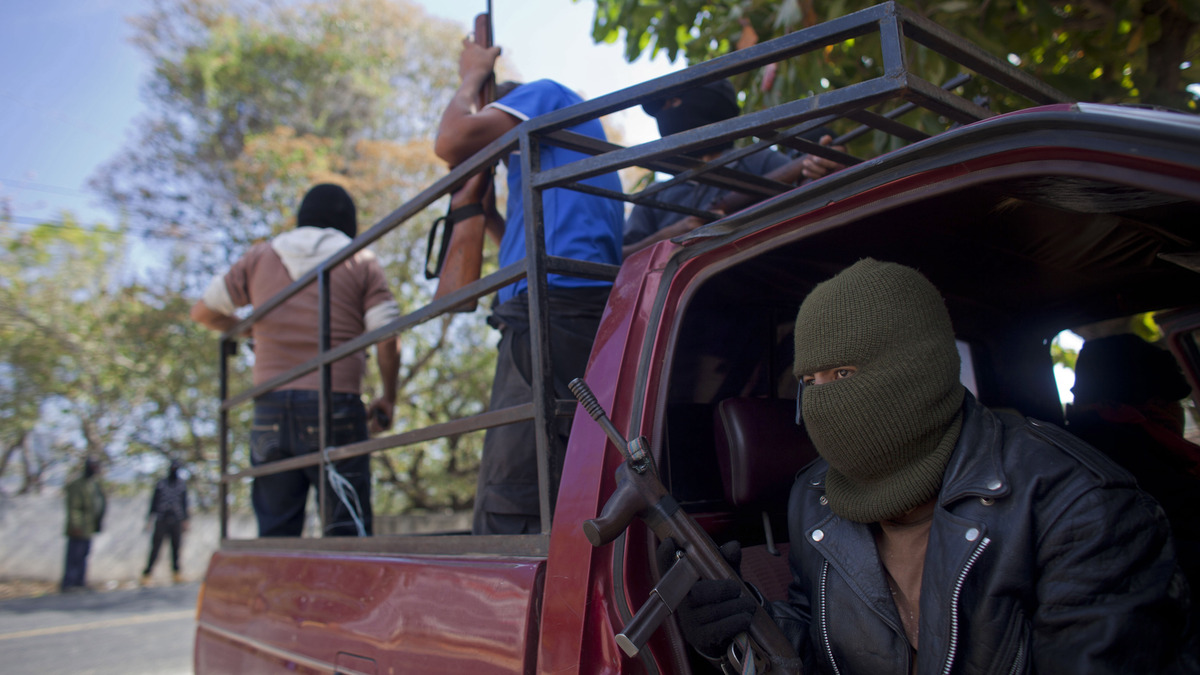 Masked and armed men guard a roadblock near the town of Ayutla, Mexico, on Jan. 18. Hundreds of men in the southern Mexican state of Guerrero have taken up arms to defend their villages against drug gangs.

On the main road into the Mexican town of Ayutla, about 75 miles southeast of Acapulco, about a dozen men cradling shotguns and rusted machetes stand guard on a street corner. Their faces are covered in black ski masks.

The men are part of a network of self-defense brigades, formed in the southern state of Guerrero to combat the drug traffickers and organized crime gangs that terrorize residents.

The brigades have set up roadblocks, arrested suspects and are set on running the criminals out of town.

They go over patrol shifts schedules, handwritten on wrinkled papers, and communicate with other checkpoints in town via walkie-talkies. One man, who wouldn't give his name but identified himself as a "lower commander," said the townspeople had no choice but to take up arms. 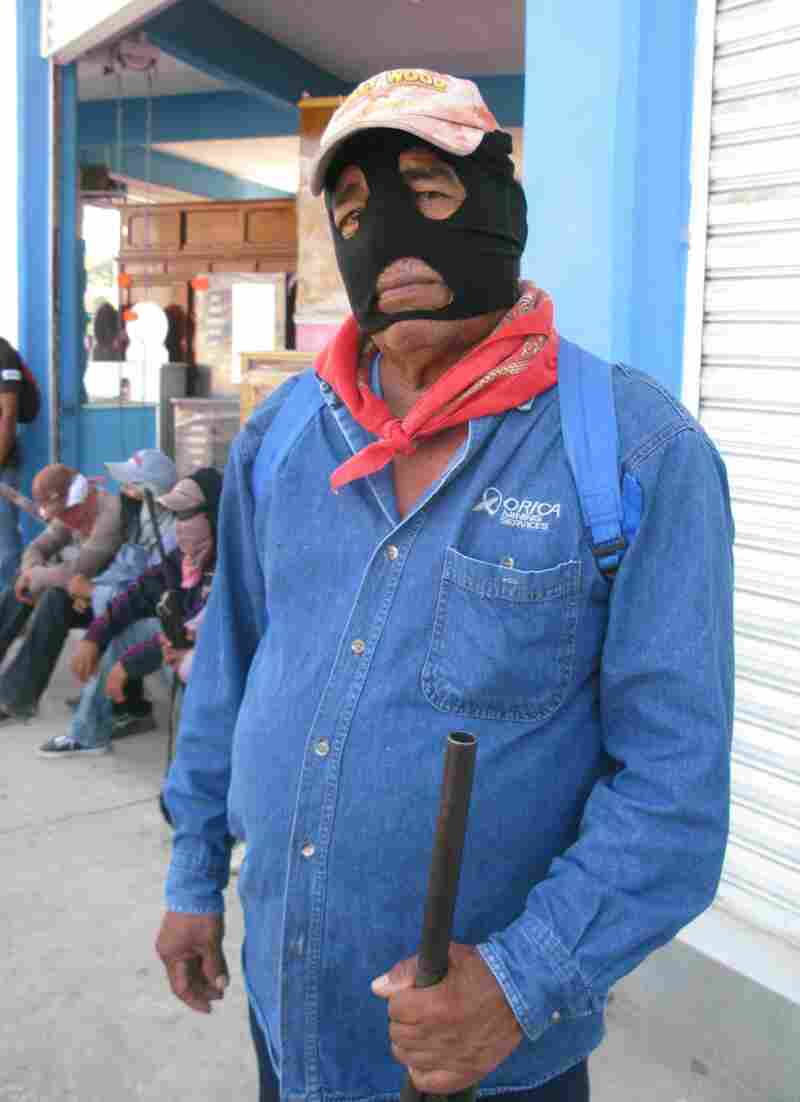 A man who identifies himself as a lower commander in Ayutla's self-defense brigade says residents had no choice but to take up arms. Carrie Kahn/NPR hide caption

The 66-year-old cattle farmer and great-grandfather says it started at the beginning of the year. His cattlemen association was told each member had to pay 500 pesos — about $40 — to a local gang, or else.

"Everyone did as they were told," he says. "Everyone paid it."

But he says people started talking about fighting back. That's when the kidnappings started. He says the gangs snatched several heads of communities in the middle of the night. The townspeople grabbed their rifles and freed the victims. Then they started stopping cars coming in and out of town, checking IDs against lists of names of so-called "bad guys."

A man who calls himself Comandante G-1 says residents had no choice.

"We were being threatened, kidnapped and extorted. Anyone who had a small business or started building something had to pay the gangs," he says. "The authorities did nothing to stop it."

Authorities Try To Step In

Authorities are sympathetic. Guerrero state Assistant Interior Secretary Rossana Mora Patino says it's understandable and even legitimate that the people of Ayutla have taken matters into their own hands.

But she says their actions are illegal and must stop.

Stopping the self-defense brigades has become a sticky situation, though. Several more have sprouted up in nearby towns, and authorities are cautious about how to proceed, not wanting to add fuel to the fire.

Guerrero state has a long history of rebellion, dating back to Mexico's War of Independence. Ayutla was host to a significant uprising against the Spanish. More recently, the state has been home to some of Mexico's most stubborn guerrilla movements.

A few days ago, the army and state police were sent in to restore the peace. They set up checkpoints and allowed the brigades to continue their own stop and searches, for now.

'We Demand They Do Their Job'

Caught in the middle of the current standoff is Ayutla Mayor Severo Castro Godinez.

"Look, the brigades have helped us greatly. They brought the situation here in Ayutla under control. They've controlled the criminals," he says. "Now it's time for the authorities to do their job. We demand they do their job."

Castro knows crime in Ayutla well. His 16-year-old daughter was kidnapped from his restaurant three years ago. She was held for 10 days before the kidnappers released her. Many townspeople have been crime victims.

At a taxi stand, drivers shout out the names of nearby towns to passersby. Taxi driver Leopoldo Castillo says most businesses make regular payments to the gangs.

"We are sick and tired of it — the pressure, the harassment by the crime gangs," he says.

He says he's glad the army has arrived, but he hopes the self-defense brigades stay on, too.