Accessibility links
Egypt's Salafis Emerge As Powerful And Controversial Political Force The ultra-conservative Muslims, whose influence has grown since the Arab Spring, aspire to a society ruled entirely by Islamic law. But to their critics, the Salafis are religious fanatics who are trying to drag the region back to 7th-century Arabia. 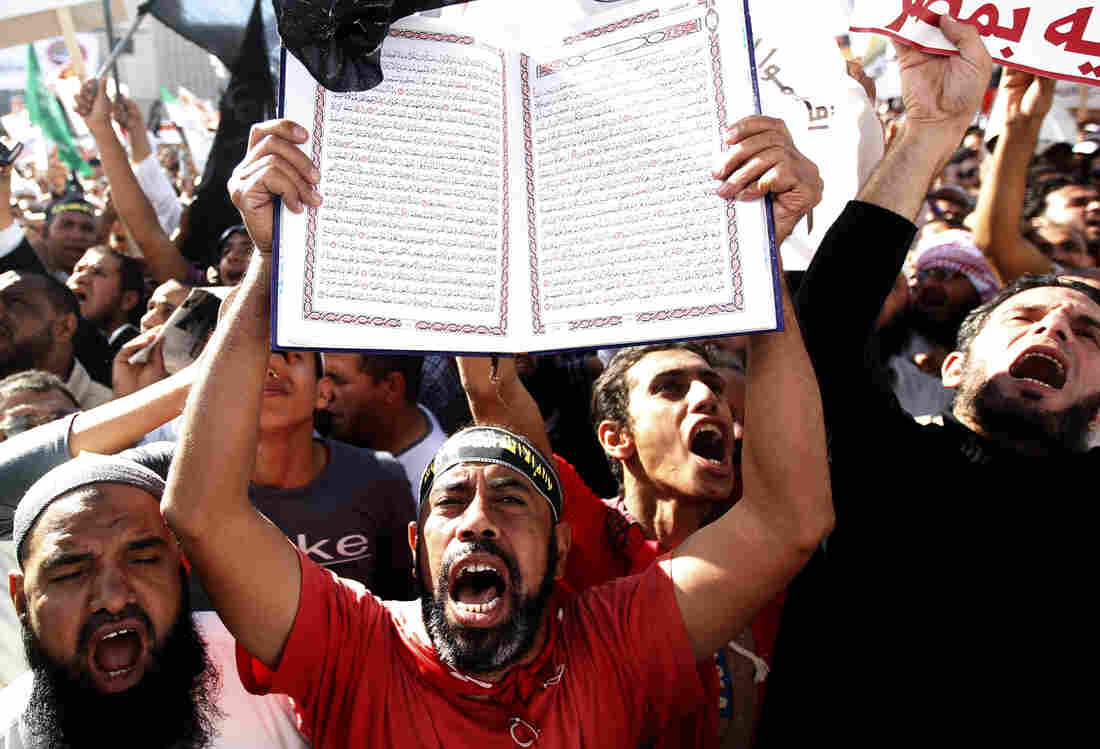 A protester holds a Quran at a Salafi rally for the enforcement of Islamic Shariah law last fall in Cairo's Tahrir Square. Repressed during the rule of President Hosni Mubarak, the country's ultra-conservative Salafis have seen a resurgence since the Arab Spring uprising. Mohamed Abd El Ghany/Reuters/Landov hide caption 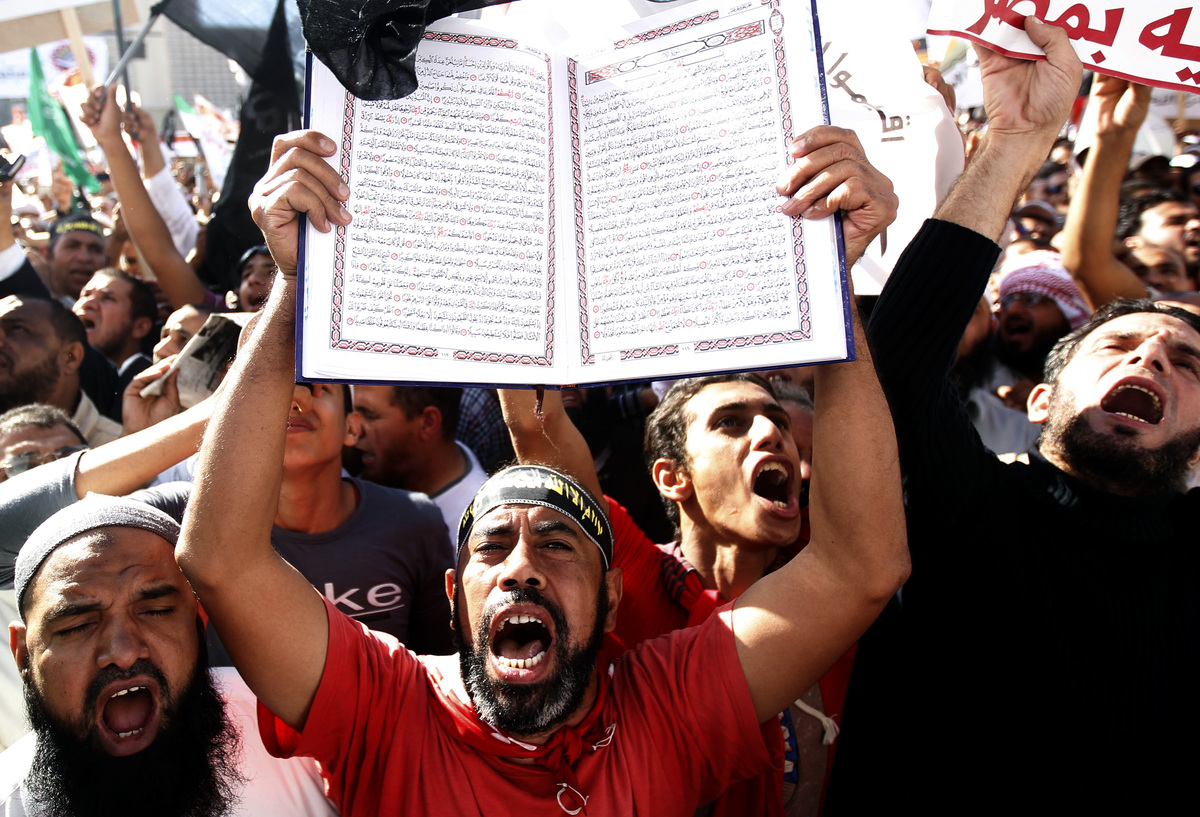 A protester holds a Quran at a Salafi rally for the enforcement of Islamic Shariah law last fall in Cairo's Tahrir Square. Repressed during the rule of President Hosni Mubarak, the country's ultra-conservative Salafis have seen a resurgence since the Arab Spring uprising.

The uprisings of the Arab Spring unleashed a new political force in the region — Salafis. These ultra-conservative Muslims aspire to a society ruled entirely by a rigid form of Islamic law. Their models are the salaf, or ancestors, referring to the earliest Muslims who lived during the lifetime of the Prophet Muhammad.

To their critics, the Salafis are religious fanatics who are trying to drag the region back to 7th-century Arabia. But the Salafis maintain that they are offering the purest alternative to the dictatorships that have long dominated the region.

In Egypt, Salafis are now a vocal and powerful part of the political process.

Nader Bakkar, a young engineer, is the spokesman for Egypt's most successful Salafi political party, Nour. He insists their ideology is not backward-looking.

"It's not a thing that conflicts with civilization or modern society, not at all," Bakkar says.

He sits in a hotel lobby. Nearby, men drink beer and women sit unveiled. It certainly isn't the vision of Egypt that Nour has in mind.

Bakkar says the closest thing to a Salafi-run state is Saudi Arabia, a nation where women can't drive and have few rights, and where people live in a gender-segregated society. It is also a nation with strong ties to the West. 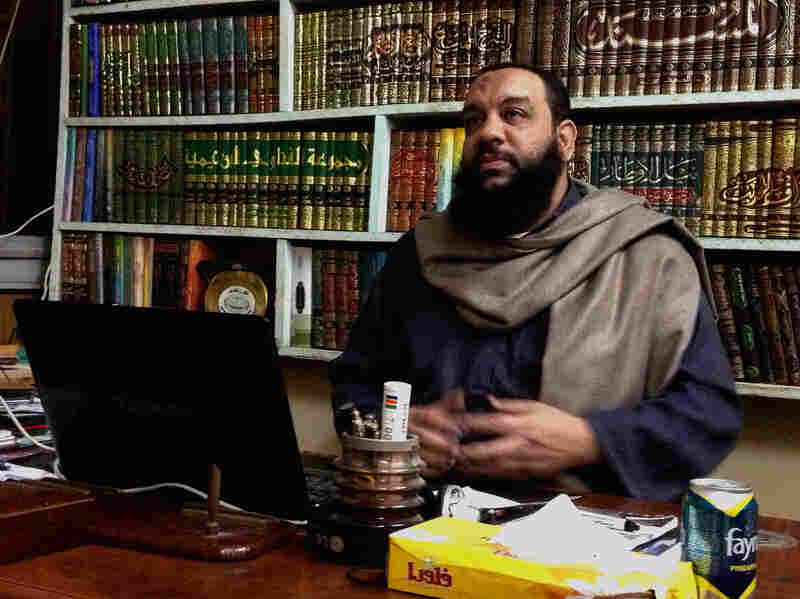 Sheikh Gamal Saber, founder of a Salafi party called Ansar, is banding with other Salafi groups behind a hardline agenda that would ban alcohol, segregate the sexes and require women to wear veils. Leila Fadel/NPR hide caption 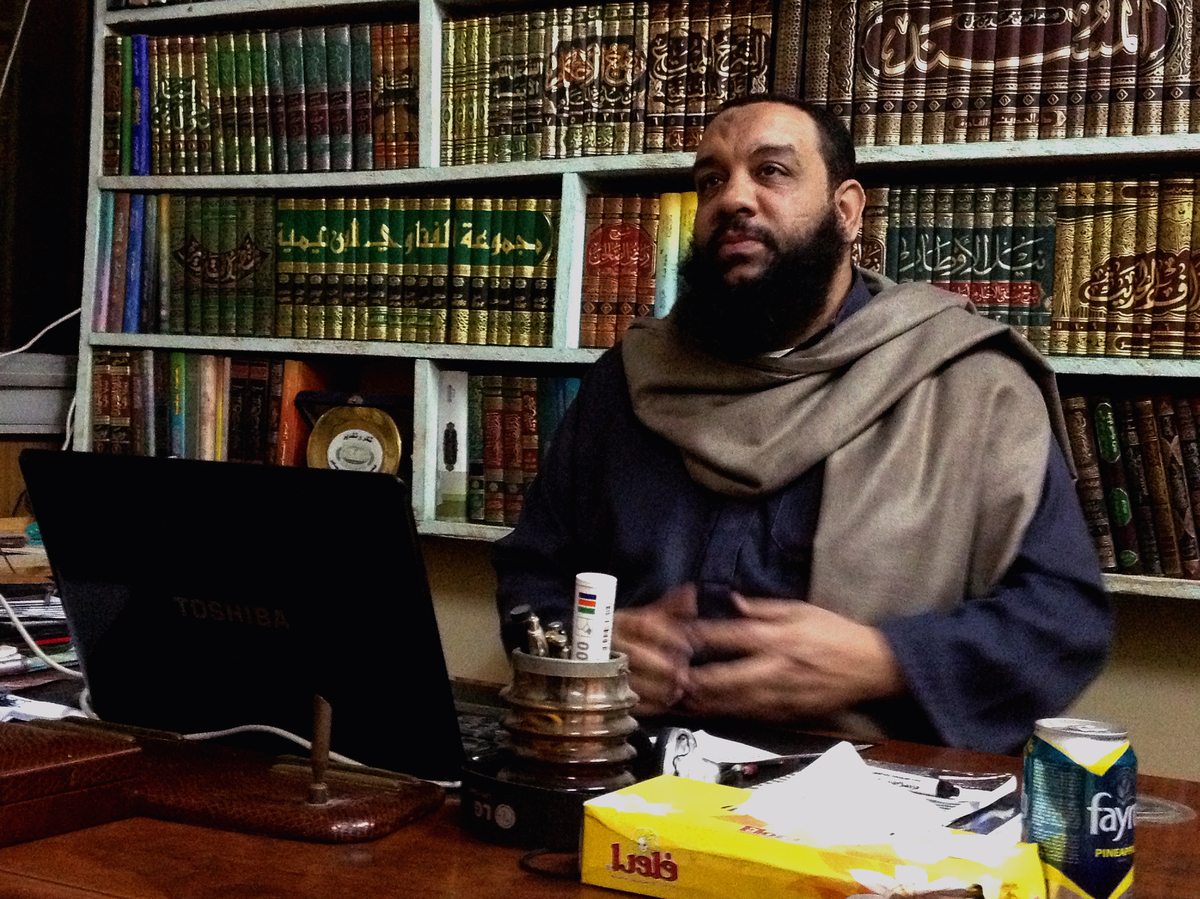 Sheikh Gamal Saber, founder of a Salafi party called Ansar, is banding with other Salafi groups behind a hardline agenda that would ban alcohol, segregate the sexes and require women to wear veils.

But he adds that Egypt is not Saudi Arabia, with its diverse population of Christians, Sufis and other types of Muslims.

"We cannot impose our religious point of view, our doctrine," Bakkar says, adding that people must choose it.

Prior to Egypt's revolt in 2011, Salafis were repressed. Pious men with unkempt beards were targeted by the secular and autocratic regime of President Hosni Mubarak, and the movement went largely underground.

Today, Salafis are out in the open and flourishing. Last year, in Egypt's first post-revolutionary elections, Nour Party candidates won about 25 percent of the seats in Parliament. It was second only to the Muslim Brotherhood, another Islamist party, though one less rigid in its beliefs.

Bakkar brags that politically, Nour is much younger than the Muslim Brotherhood but very soon will rival the Brotherhood as the most powerful political force in Egypt.

With politics, however, comes compromise and competition. The Nour Party once was basically the only show in town for Salafis. Now it is coming under fire from more rigid conservatives who say Nour made too many concessions in the debate over Egypt's new constitution, limiting the role of Islamic law. 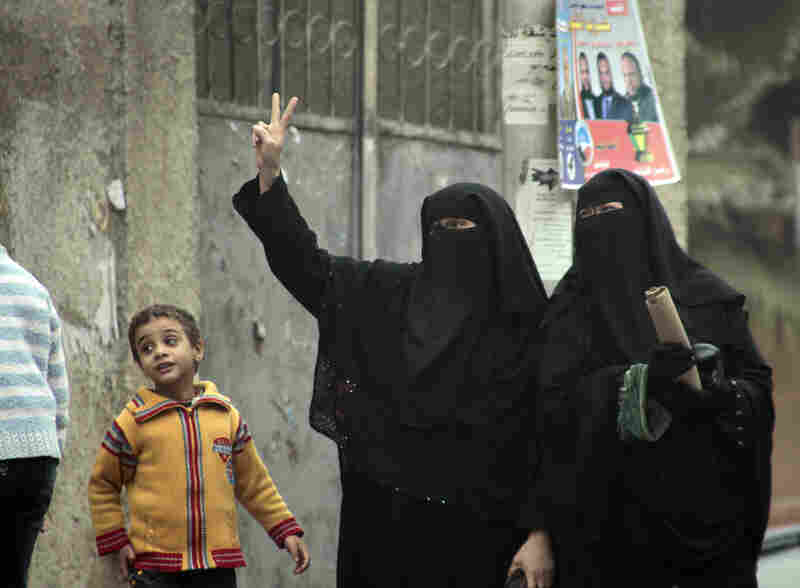 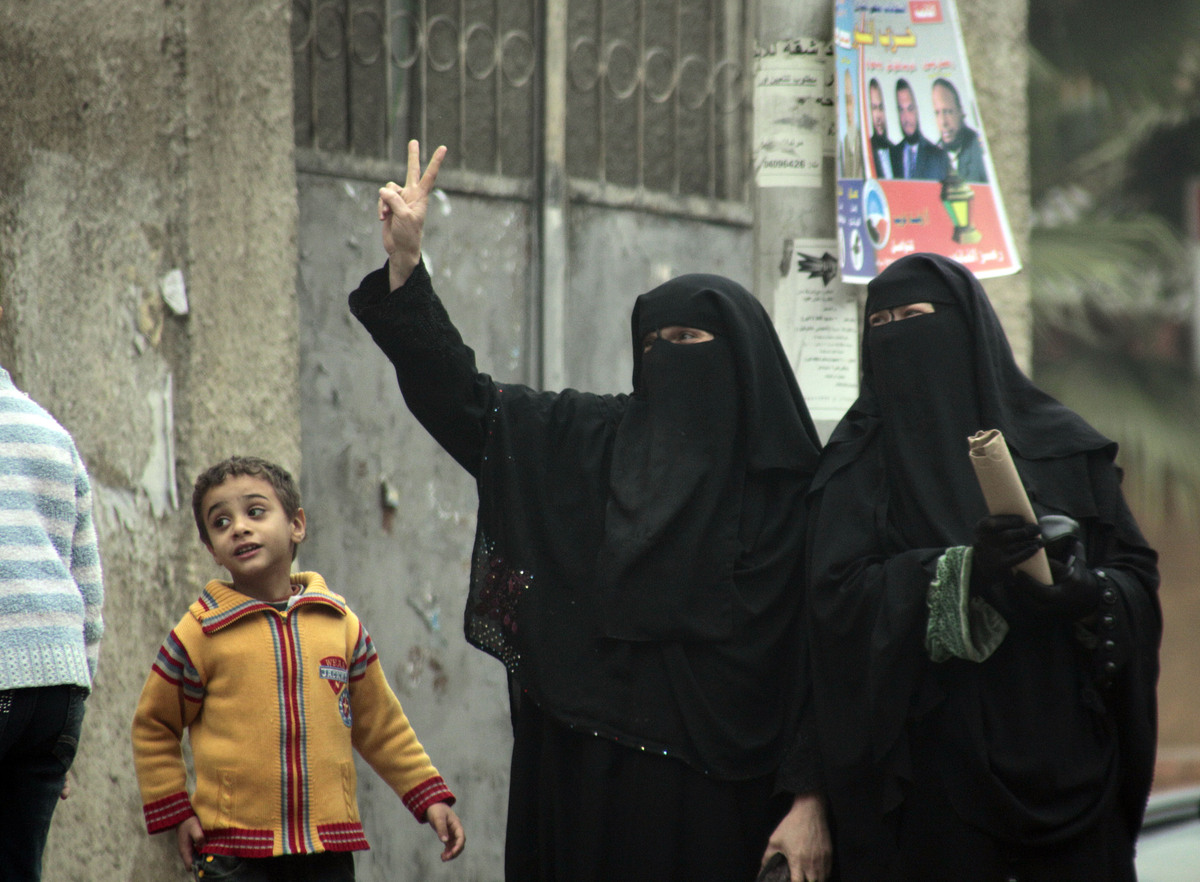 Female supporters of the Nour Party flash victory signs outside a polling station in Cairo on Jan. 30, 2012.

As a result, new Salafi parties are springing up, one founded by its own former secretary general. Others are followers of fiery Salafi Sheikh Hazem Abu Ismail, who briefly ran for president before being disqualified.

In the poor Shubra district of Cairo, Sheikh Gamal Saber tells us his new party, Ansar, will give Salafis another alternative.

People pop in and out of Saber's office looking for handouts — food, blankets and medicine.

On this day, a few young women greet Saber from the doorway. They are cold. He pulls blankets from the endless piles that are stacked to the ceiling in a storage room and hands them over. He has provided charity like this for years, and now he's hoping it will translate into votes in the upcoming parliamentary elections.

"We were fooled as Salafis," he says, calling Nour a disappointment, as he sits in his office surrounded by religious books. "The people are not the lords; the only lord is God. The majority is not the lord; the majority does not rule. God rules."

He and other Salafis are banding together behind a hardline agenda that ultimately would ban alcohol, segregate the sexes and require women to wear the veil. How far would a Salafi-run Egypt go toward enforcing those ideals? Saber says the goal is to get Islamic law first, and then deal with its application.

Critics say Salafis are among the most polarizing elements of Egyptian society, transforming every political debate into a referendum on religiosity in a nation where most residents are Muslim. They add that the basis of Salafism ignores 1,400 years of history and uses religion to manipulate.

A popular TV satirist, Bassem Youssef, has made it a mission to battle the Salafi influence on his comedy show. In one program last month, this liberal Muslim who is known for his humor found nothing to joke about as he discussed the Salafi political agenda.

Fatalities Reported At Mass Funeral For Riot Dead In Egypt

On Second Anniversary Of Revolution, Egypt Is 'A Nation Divided'

Amid Instability In Egypt, Coptic Christians Flee To U.S.

"They don't look at us as Muslims and Christians, no, but as unbelievers, hypocrites, enemies of religion and enemies of the Lord. So we deserve to be humiliated and cursed, even if it goes as far as beatings and torture," Youssef said.

Salafis, he says, are bullies who threaten those who don't share their rigid views. Youssef, known as Egypt's Jon Stewart, adds that he is not going to bother explaining that Islam is good. That is a given, he says.

"I don't have to hold up a white rock and say that's white. Everyone knows it's white," he says. "But regrettably, we have to do all this work to clean off this filth."

Youssef's words resonate with many Egyptians who worry that the Salafi influence will transform the jovial nature of Egyptian society and take the nation backward.

"They are not willing to live and practice politics within the confines of liberal democracy. So, when Egyptian or Tunisian liberals say that certain fundamental rights should be nonnegotiable, they should be guaranteed, Salafis don't want to hear that," he says. "For them, that's a nonstarter."